2 Sept 2007
The Jewish Ritual Bath in Speyer
A cold water bath, a so called mikveh, was used by both Jewish men and women for ritual washings after a period of uncleanliness (like fe. menstruation, contact with the dead etc.). The water needed to be clean, which means a natural well or an artificial one dug to the ground water level. The mikveh in Speyer is of the latter type (the Rhine running through the town wasn't clean enough).

Constructed 1110-1120, it is one the oldest and best preserved in Europe and had obviously been built by the masons also working on the cathedral. 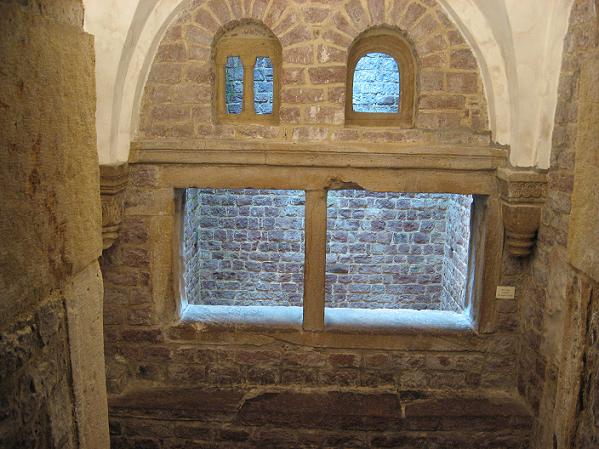 The wall that separates the anteroom from the bassin

A staircase leads about ten metres under the ground where it opens to the anteroom. With its cross-grain vault, it is the most beautiful part of the building, and the most interesting one because of the architectural history connected to it. It was very unusual for Christian masons to build a Jewish bath, but some of the bishops of Speyer protected the Jewish community in the Middle Ages. 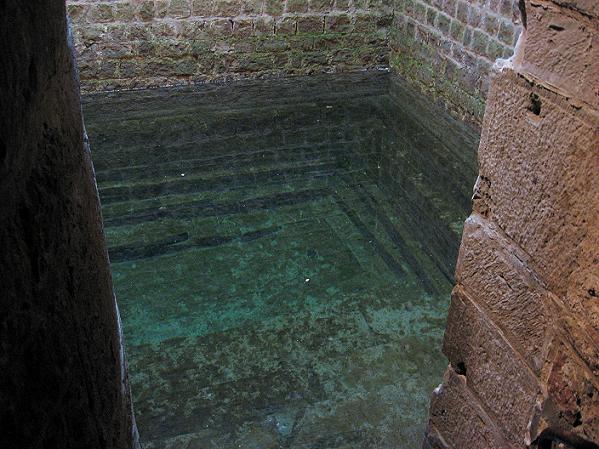 The bassin
The water is usually so deep a man can immerse himself fully, which is the requirement for proper ritual cleaning. Since the ground water level changes depending on the level of the Rhine, the bassin was very full when we were there and covered the lowest steps of the staircase. 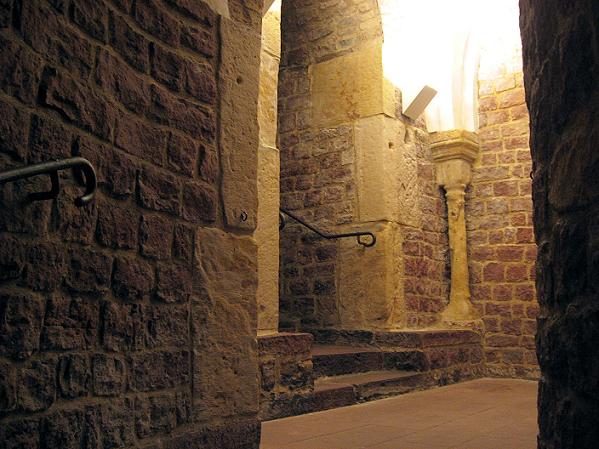 View from the bassin staircase into the anteroom
The bath is no longer officially in use today, but the guide told us that sometimes orthodox Jews from Israel and particularly the US wish to use the mikveh. This can be arranged outside the official tourist opening times. 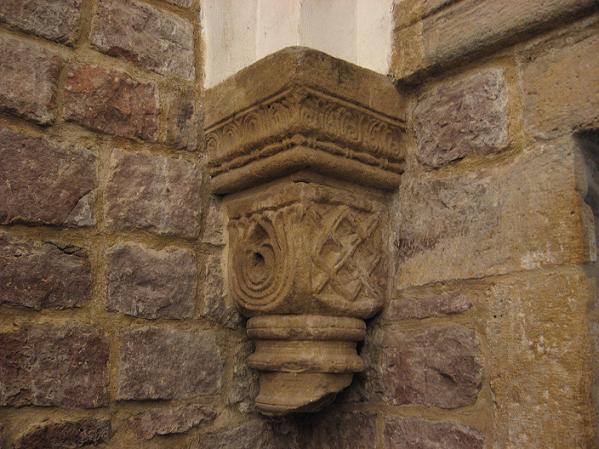 Closeup of a pillar capital
The material used was mostly red sandstone (the same as used for the cathedral, as can be seen here). 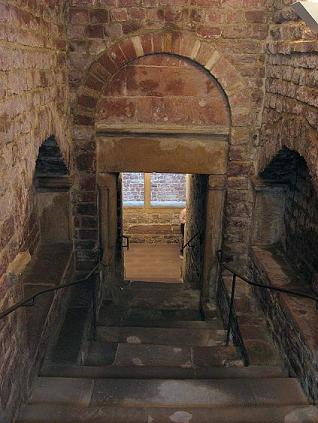 Staircase leading down to the anteroom of the mikveh
The mikweh was closed by a double winged gate and constructed in two parts; you can see niches with stone banks on both sides. The second part, which is flanked by by pillars, was closed by another door.

Note the murals above the gates in the photo below. They are worked in a net of quadratic sandstones points up, in imitation of the Roman opus reticulatum. 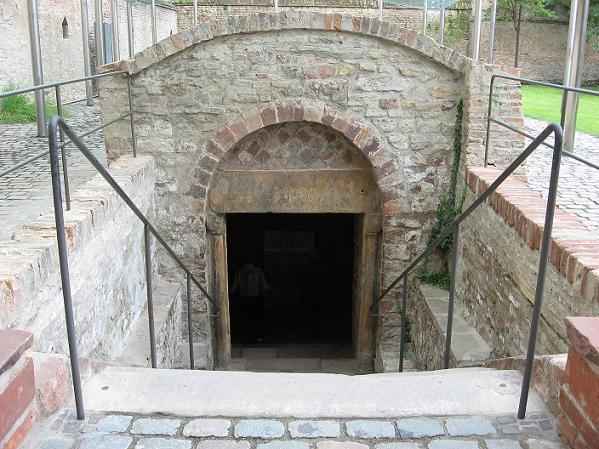 Entrance to the mikveh, outside view
.
Bishop Rüdiger Huzmann granted the Jews settlement in Speyer in 1084. At first, they lived in the suburb, but after the progrome in connection with the 1096 crusade, Rüdiger allowed the community to move to an area near the cathedral, within the protection of the town walls.

The curia Iudaeorum, called 'Judenhof' by the inhabitants of Speyer, became the centre of Jewish life and culture until the middle of the 13th century. During that time, the Jewish community in Speyer belonged to the most important ones in Europe.The Judenhof was much larger than the remains today; besides the famlies' houses it encompassed the mikveh, a synagogue, a school, and women's prayer room. 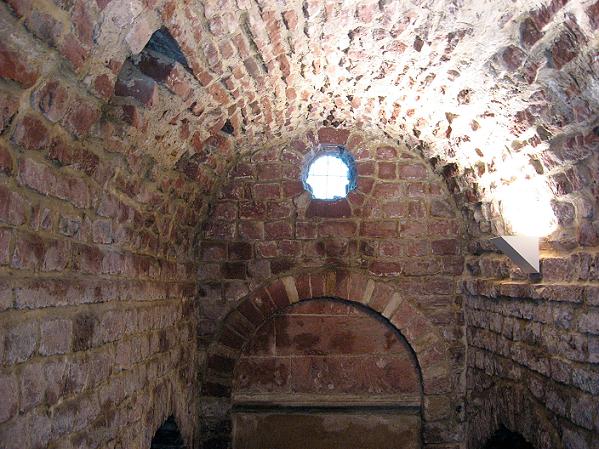 Detail from the staircase ceiling
Because of their trade contacts all over Europe and to the near and far East as well as their knowledge of languages and cultures and the high status education holds in their society, the Jews formed an élite among the town people. The Sages of Speyer, a group of rabbis (or rabbe'im) famous for their wisdom, had considerable influence on the Jews in Europe. Their council was sometimes even sought by bishops and emperors who granted the Jewish community in Speyer a number of privileges.  ¶ September 02, 2007

Comments:
Cool stuff, thanks for the pictures and the info. Find anymore plot bunnies?

That's so beautiful. I can see I need to go back to Speyer some day. Is this part of a still standing synagogue? How come it is still so well preserved, and wasn't destroyed in 1938?

Thank you, Ann. No, no plotbunnies in the mikwe, it would require too much research. ;)

Jeri,
there are a few remains of the synagogue as well. I'm not sure how the bath survived, but the Jewish quarter was abandoned long before 1938, the remaining walls of the synagogue used as walls for new houses, and the whole area built over. It was as late as 1981 that the remains of the Jewish quarter were archaeologically researched.
You definitely should go back to Speyer. The cathedral is maginificient, and even more beautiful after they got rid of all the baroque stuff inside and huts outside.

It's interesting that a Christian bishop was apparently happy to accommodate another faith. Multicultural societies have a long history.

Well, those who protecetes the Jews often had ulterior motives, but esp. in case of Speyer there seems to have been an awareness among some bishops that the Jewish community added to the florishing of the town, and not only because of the money. :)

Thanks for pointing me this way, Gabriele. I had never seen pictures of a Jewish bath house. I wish public baths still existed; I think it would be a fine thing for a community. At the very least, I'm sure our Republican Senators would enjoy it.

Lol, they can have Roman style ones. They came with naked slave girls and boys. :)