29 Oct 2007
More Castle Ruins - Hanstein
This post is scheduled for a rewrite.

I could see the towers of the castle above the trees for years without being able to visit it. In the 80ies, my parents lived in a small town south of Göttingen, and both road and railway between the towns ran close to the German border. Castle Hanstein was on the East German side and thus out of reach. 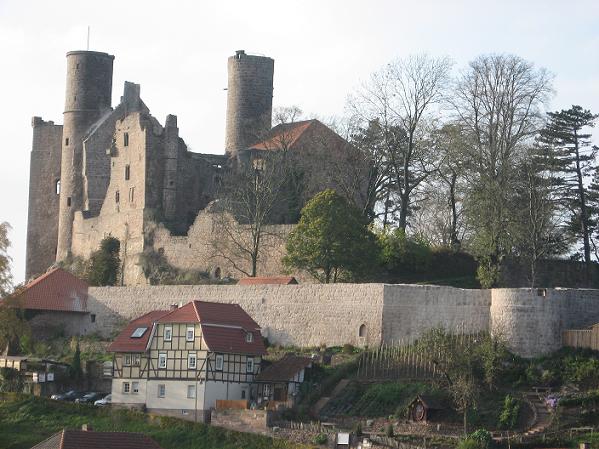 Hanstein seen from the southeast

Of course, we had visited it as soon as the passage was open, and it was pretty impressive already then. Efforts to prevent further decay and some renovations had been going on, partly financed by West Germany. Today, more parts are accesible, and the great hall has been repaired and is used for concerts sometimes. So when after several days of autumn mists the sun played nice yesterday, I decided to give it another look, accompanied by my faithful camera.

The road meandering through some villages no longer is East German concrete with cracks, but it still is small and a better fit for the almost extinct Trabis than for a Mercedes. I left the driving to my father who came along. *grin* 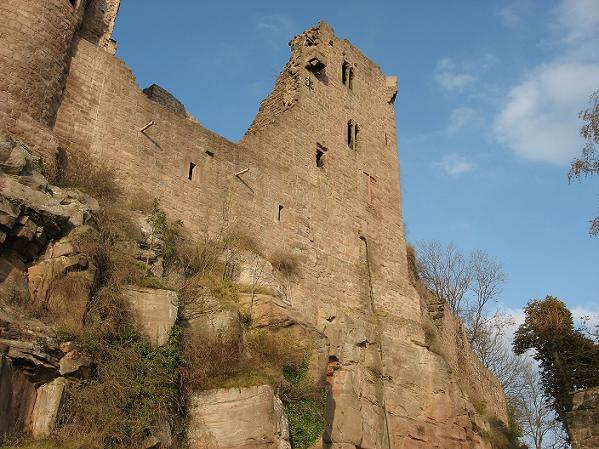 Inner curtain wall and connected hall with natural stone foundations
The Hanstein is quite different from the Plesse. For one, while it has two curtain walls, there is no clearly distinguished outer ward, but the entire living complex is behind the inner wall. Second, a lot more of the buildings remains, an interesting maze of roofless walls in various stages of crumbling. Often two to three storeys are left, and some of the towers stand amost to full height. 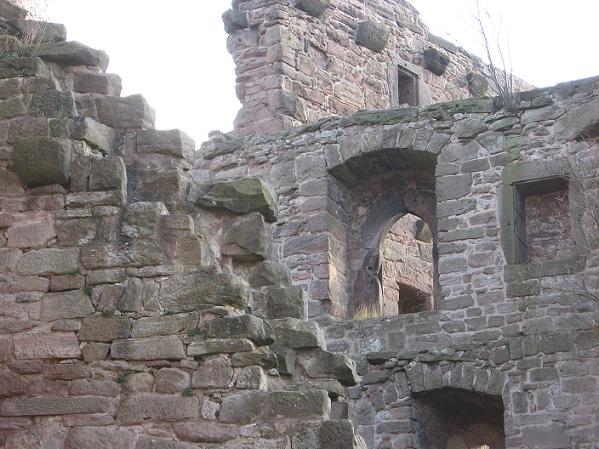 One of the many views from inside the bailey ruins
Castle Hanstein had been in possession of Otto of Northeim and later Henry the Lion of Saxony in the 11th and 12th century. At that time, the inner bailey was still a wooden construction. In 1308, the brothers Heinrich and Lippold of Hanstein were granted the right to build a new stone castle. They had to pay for it, and in exchange the family held the hereditary right to the fief. The family still exists today.

The construction of the Hanstein was finished in 1414; afterwards only small changes took place. The castle was partly destroyed in the Thirty Years War, and while repairs were made, it yet was abandoned in 1683. I suppose one of the reasons was the changing life style - castles no longer offered sufficient protection, and palaces in the valleys were more comfortable and probably warmer. Constance owes me some really good chocolate cookies for the pics - there was an icy blast and my hands got very cold. :) 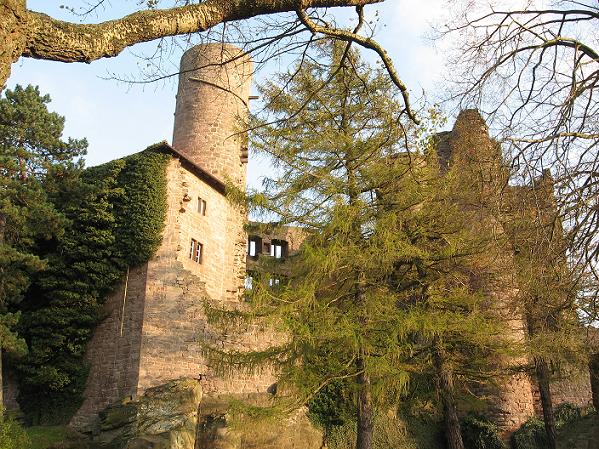 A view of the inner towers, main hall and various annexes from the west
When interest in the old times grew in the 19th century, the main hall of the Hanstein was rebuilt in 1840, and further repair went on in the early 20th century, and then again since 1985.

Despite the cold wind, my father and I had a blast with the ruins. So many interesting motives for pics, and few tourists around to spoil them.

Comments:
That is just beautiful. I never go anywhere here; it's too expensive, and most castles etc. are not really good places to take little kids. Shame, because that's one of the things we were most looking forward to when we came here.

Yeah, UK entrance fees are atrocious. I remember Edinburgh Castle was 6 pounds in 1998, the Hanstein was 2 Euro.

Don't know about kids, though. All those ruins are a bit dangerous if they like to climb where they should not - it's a wonder my brother and I are still alive, lol.

English Heritage seems to see the buildings in its care as a profit centre. The entrance fees are so outrageous you need to have a very good reason to visit to justify them. (Am I lucky or unlucky that practically nothing remains from my chosen period? Discuss).

I wonder if kids have more common sense than we give them credit for? We never fell off ruins when I was small, because we knew they were ruins and might be dangerous, so we were careful. But most little children get bored quite quickly with historic sites (and small wonder; I suppose it just looks like a heap of stones to most kids) so you don't get much value from the entrance fee. Shame, because kids are often fascinated by history if they have a way of getting inside it.

Cracking photos, Gabriele! It's amazing that so much of the structure is still standing.

I can see that the upkeep of historical sites requires a lot of money, but I still wonder why no German church charges an entrance fee (they ask for donations and usually I give something) while York Cathedral wanted 9 pounds, why the Hanstein can maintain upkeep with 2 Euro per person and the Plesse via a society and donations (they don't charge an entrance fee at all), and yet English Heritage needs such atrocious amounts of money without telling you what it's used for. Well, Vindolanda was 4.50 pounds as well, but at least they told you what they're going to do with the money, and thus I paid it without a grudge.

I hate to sound like an ad for English Heritage but for 40 pounds you can get a year's membership, which gets you into any of their properties free (plus free entry for up to 6 kids under 19), so if you want to go see a lot of their properties, that might actually be economical (that's what I did when I lived there and it worked out pretty well). It also gets you half-price admission to some places in Scotland and Wales (free after the first year). Sorry, the reference librarian in me couldn't resist.
Awesome pictures as always, Gabriele. :)

Ann, if you live in the UK, sure, but for tourists it's really expensive.

Scotland was a bit better since I could get a pass that covered a number of sites, so while Edinburgh would have been 6 pounds, it wasn't that much for me, to be honest.

"My" castle is Caerphilly Castle in Wales. My Dad lived near there and played in the castle when he was a kid. Of course now it's been restored and it costs to go in but I visit it every time I'm in Caerphilly. My cousins still live nearby.

Pictures to dream over.
Thank you, Gabriele.

Thank you, Wynn and Bernita.

Stunning, and so very inspiring!

Great pics of my favourite castle, Gabriele. And since you wonder how they raise funds to keep the place up: There´s a big medieval-fair on Hanstein castle every first weekend in August with up to 10.000 visitors. That helps quite a bit.