1 Jan 2008
Seven Fun Facts about Heinrich IV
This time I haven't been tagged, but I found a fun meme on this blog as well as here, and decided to play along. I have a number of historical characters about whom I post occasionally, all the way from Arminius to Charlemagne and to Duke Henry 'the Lion' of Saxony. But I decided for a man I've so far only mentioned a few times in my posts about Otto of Northeim: King Heinrich IV (1050 - 1106, crowned Emperor in 1084).

Heinrich IV is one of the most controversial characters in Mediaeval history, and he already divided his contemporaries. Some chronicles treat him like a second Nero or Caligula, while others blame his enemies for causing so much trouble. The truth, as usual, lies somewhere in the middle. 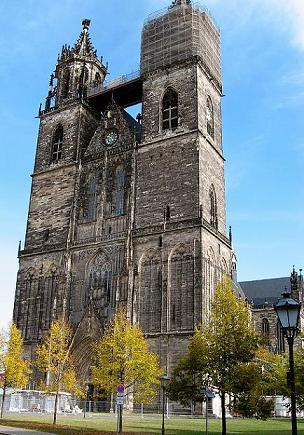 (Magdeburg Cathedral, westwork)
1) Heinrich became king upon his father's death in 1056, under regentship of his mother Agnes. In 1062, he was kidnapped by a group of nobles who didn't agree with the way Agnes conducted affairs. They lured Heinrich onto a ship on the Rhine and when he noticed what was going on, the young king jumped overboard so that one of the conspirators had to jump after him to prevent Heinrich from drowning. A few years later, in 1065, Heinrich was officially proclaimed adult and he'd have used the sword he got during the ceremony (the so called Schwertleite) to chop off the head of the conspirators' leader, Bishop Anno of Cologne, if not his mother had held him back.

2) Heinrich wanted to get a divorce from his wife Bertha of Turin because "he just could not live with her, and btw, she's still a virgin." That might have worked today, but it didn't in the 11th century, and he got stuck with Bertha until her death in 1089. Also, the papal legate told Heinrich to sleep with his wife already. 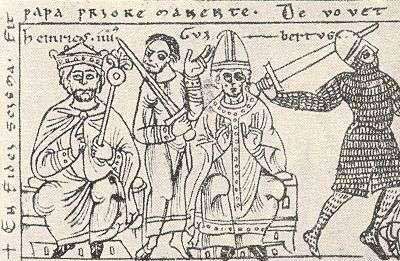 3) Heinrich managed to get excommunicated four times by three different popes. The most famous one was the first banishment by pope Gregor VII in 1076. Excommunication meant that the nobles of the realm were no longer bound to the oaths towards the king, and with an increasing opposition that turned out such a big problem that Heinrich prefered to travel to Canossa in northern Italy where Gregor resided, and formally humiliated himself to get accepted back into Church. The pope could not refuse because a repentant sinner was to be forgiven (and the opposing nobles suddenly found themselves oathbreakers). But the troubles didn't get away, so a few years later, Heinrich was excommunicated again. This time he went to Rome with an army, sent Gregor packing and put a pope of his choice, Clemens III, onto St.Peter's See. Clemens then crowned Heinrich as Emperor. During the ensuing schism, two more Gregorian popes excommunicated Heinrich, but he no longer cared, and even part of the German nobles had their fill of those games.

4) After Bertha's death, Heinrich married Adelheid-Praxedis of Kiev. I'm sorry to say that this marriage didn't work any better. Their mutual accusations of adultery, rape, violence, and sodomy makes the quarrels between Paul McCartney and Heather Mills look like an amicable separation. 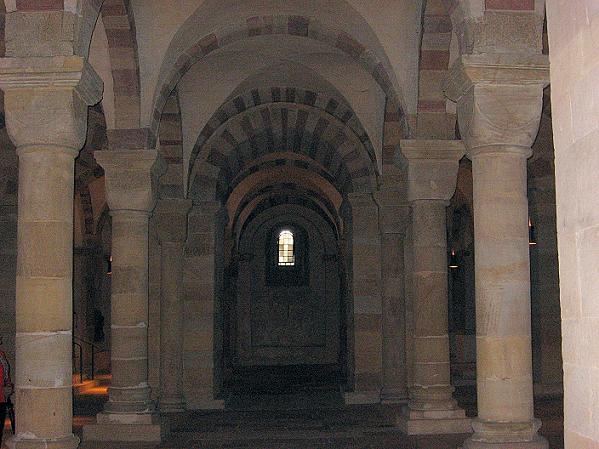 Speyer Cathedral, crypt
5) Since northern Italy was part of the Holy Roman Empire, Heinrich could not stand idly by when the schism led to military conflicts. He interfered on behalf of Pope Clemens, but then got stuck in Italy - in the surroundings of Verona - because Mathilde of Tuscany blocked the Alpine passes against him. The fun part of this is that Mathilde was married to Welf V of Bavaria, the son of that Welf whom Heinrich gave the duchy of Bavaria after he took it away from Otto of Northeim. Otto was dead by then, or he might have thought something along the lines of neiner, neiner. It took Heinrich three years until he managed to negotiate his way home.

6) Heinrich had not much luck in his sons, either. Both plotted to send him into early retirement and take over his job. Konrad was the first to join the party of the Gregorian popes, Saxon nobles and whoever else thought Heinrich sucked, but the affair ended in nothing and Konrad died early. During that time, Heinrich had his younger son, another Heinrich, proclamied co-regent under the condition that he promised not to plot against daddy. Ever. But young Heinrich did, and more successfully than his older brother. In 1105, he took his father prisoner and forced him to abdicate. Heinrich IV died soon thereafter. 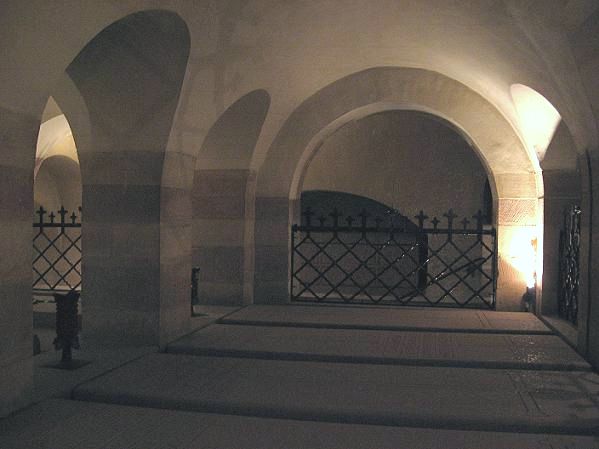 Speyer Cathedral, some tombs of Mediaeval German emperors.
7) Heinrich was first buried in the place of his death, in Liège. But since he was still excommunicated, the church was put under interdict. The body was transfered to Speyer, the traditonal burial place of the German emperors, whereof the Speyer Cathedral was put under interdict as well and the sarcophagus had to be buried outside the sacred ground. Heinrich V finally got the pope to lift the ban in 1111, and Heinrich IV could be properly put to rest in the Speyer Cathedral.   ¶ January 01, 2008

Fascinating picture of Speyer cathedral crypt! As an Hispanist I thought I was looking at the Great Mosque of Córdoba for a moment: compare this image for example, the striping of the arch and the columns look like a heavier version of the same idea. But I see that it was founded in 1030, so much too late for the Ottonian links with Córdoba to be having much effect. Am I just seeing similarities where there are none?

Thankyou for the link, meanwhile, and I was interested by your response. I was having to say quite a lot about Henry IV in the last course I taught; he's a big topic in England too since Ian Robinson wrote his biography of him. There aren't many other German rulers with full-length modern scholarly biographies in English!

I wonder about the connection, too, Jonathan. I think Speyer may have imitated the palatine chapel in Aachen.
Didn't know about the Robinson biography - but I'm not working on Henry IV on an academic level or in order to make him a novel character, but just for fun. I have the Althoff biography, but I might check out Robinson to get another view.

I had hoped Richard wouldn't be able to resist a bit showcasing. *grin*

Yes me too, will play this newest meme. Looks interesting and a good way to focus on and clarify a character.

This sounds like a variant of the five facts meme that was circulating this time last year, no? I'll see what I can come up with :-)

Do I get the impression that Heinrich was, ahem, not easy to get along with?

Thank you, Wynn. It should be fun.

Lol Carla, that's the understatement of the year. I think (and so does Althoff, btw) that his childhood, the abduction and the being dragged around by people who wanted to use him did gave Heinrich a deep mistrust towards others, perticularly the high nobles and bishops with whom he was supposed to cooperate.

Wow, that Heinrich sounds like quite a character! Damn, I wish I knew more about mediaeval/German history.

Thanks for the tag!

Yes, Heinrich must have been quite a handful. He's one of the German Emperors who makes it into school canon because of the whole Canossa thing, but limiting him to his quarrels with pope Gregor doesn't do him justice by far.

Well, there were rumours he didn't really want to have sex with women, but never anyone like Edward's Piers. :)