The highlight of the exterior is the westwork. 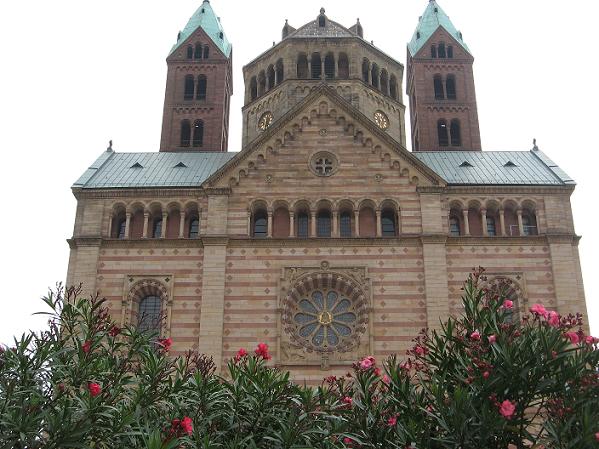 The Speyer Cathedral is one of the purest examples of the Romanesque style with a very balanced and symmetrical design. It is a triple-aised vaulted basilica, constructed 1030-1061, with some later additions, and holds the burials of several German emperors. 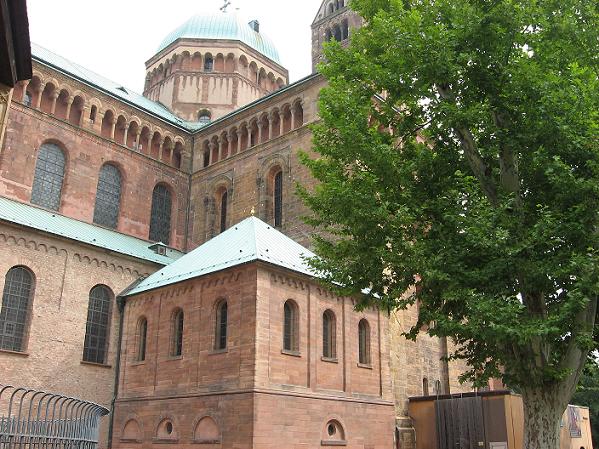 Transept and crossing tower
In 1981, the Speyer Cathedral was added to the UNESCO World Heritage list. 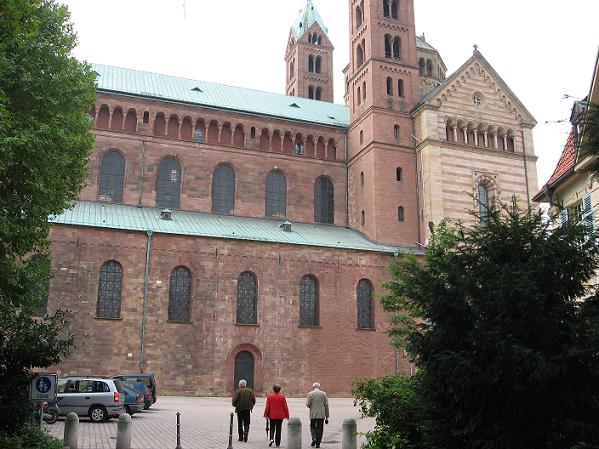 North side
Note that the aisles are lower than the main nave, a typical feature of the basilika style.
The main nave and choir belong to the second Romanesque period while the aisles and the crypt show the architecture of the first, the Konradinian stage. 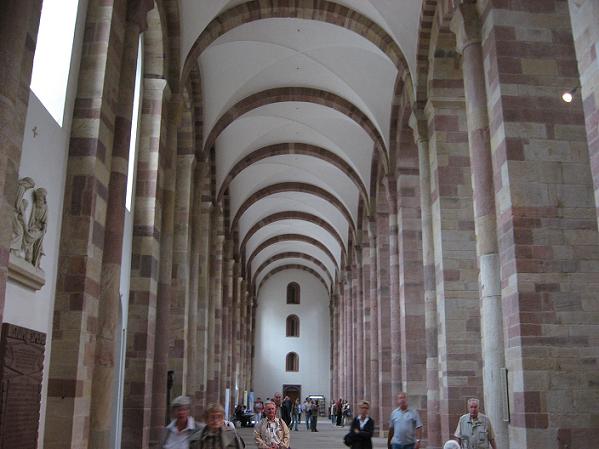 South aisle, facing west
Speyer Cathedral suffered during various wars, especially the Thirty Years War and the Palatine Succesion War (1688-1697). While the eastern part survived with little damage, the Westwerk was completely destroyed and replaced by a much simpler version in 1770. Later, some idiot in Napoleon's administration wanted to tear the entire building down and replace it with a park; luckily, the bishop of Mainz managed to stop that nonsense. The cathedral escaped the bombs of the World Wars. 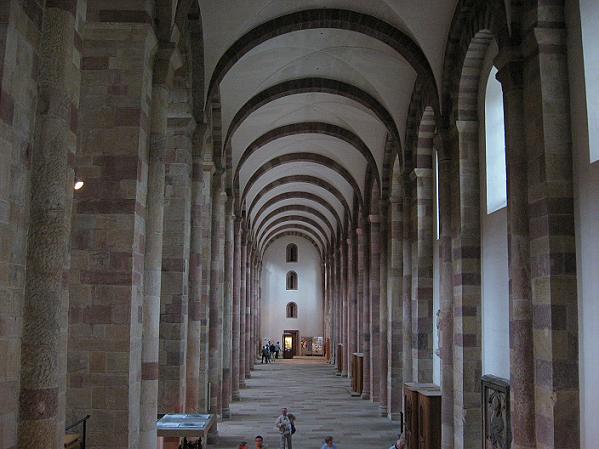 North aisle, facing west; seen from the quire;
You can see how similar both aisles are
In the 19th century, the cathedral interior was richly decorated with pseudo-historical, so called Nazarenian paintings which were duly ereased during a renovation 1957 (fortunately; there's a picture in the guide book: lots of gold and kitsch). By then, the cathedral was valued for its burials of Mediaeval Emperors. One of the better changes in the 19th century was the re-erection of the two-towered Westwerk. 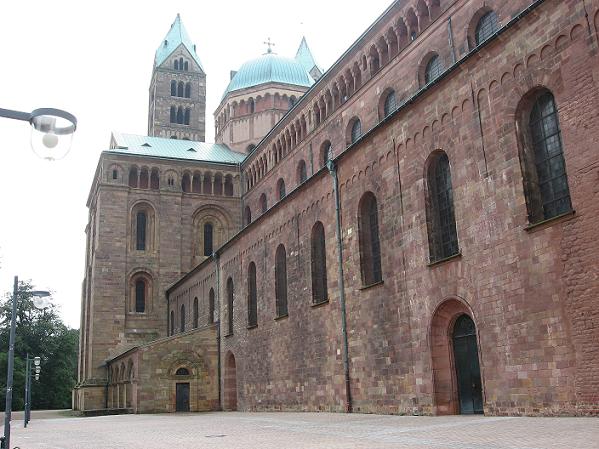 Speyer Cathedral, seen from the north facing east
Another major renovation 1984/85 got rid of more later additons and reestablished as much as possible of the Romanesque building. The latest change (1996) was the banishment of market stalls outside the church, and the reconstruction of the narthex tower of the Westwerk. The tomb vault of the Imperial burials was opened to the public. 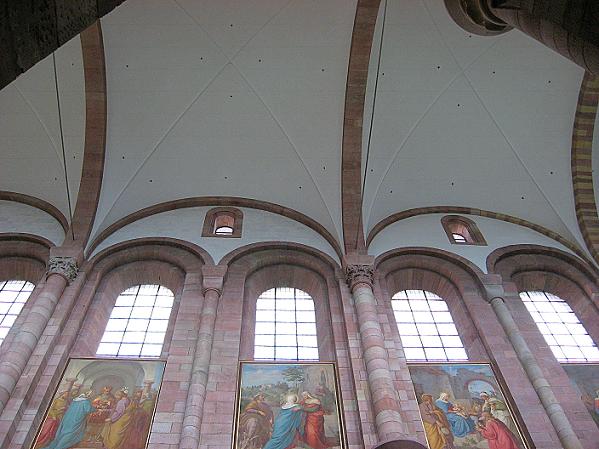 Main nave
(It reminds a bit of the Aula Palatina in Trier,
esp. considering the fact the latter had murals in Roman times.)
The walls are structured by double arched windows and frescoes. The murals are not original, but there have been paintings in the Middle Ages. The architect Heinrich Hübsch used old paintings and tried to come as close to the original as possible - much better than the previous Baroque version. 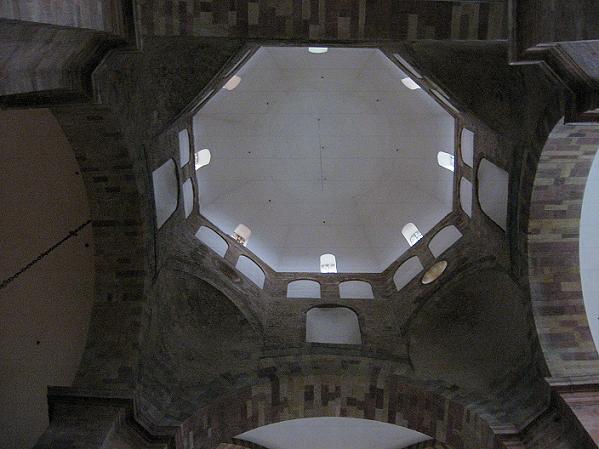 Crossing dome
I took the photo for the effect; I'm experimenting more these days. The angle doesn't show how high the crossing dome is - one of these days I'll look up the measurements for Constance. *grin* 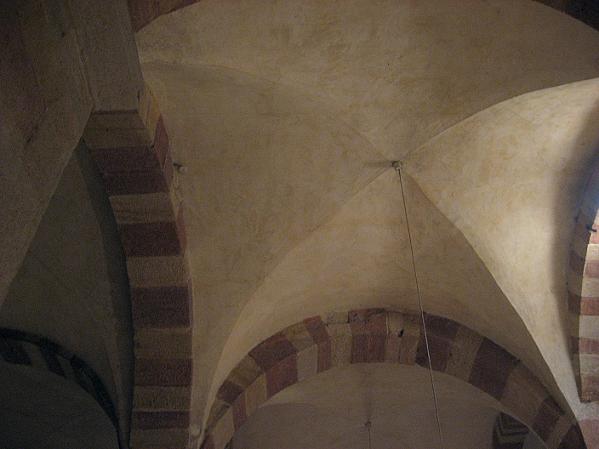 Crypt, detail of the ceiling
The crypt, one of the largest in a Medieaval church, never suffered destruction and thus represents one of the finest examples of the early Romanesque style. I'll get back to it in another post. A good example of Romanesque gross grain vaults with perfectly semi-circle arcs. A bit dark, unfortunately; the light in the crypt was very Mediaeval.
¶ February 25, 2008

Comments:
So, this Cathedral went through changes. I read the posts out of order. It's amazing that it missed being bombed during the World Wars. So many beautiful buildings were lost in different countries during this time.

Shelley, yes it went through changes, but a lot of the old substance still remains.