11 Feb 2008
Churches in Heiligenstadt
Heiligenstadt is a small town in Thuringia, centre of the Catholic enclave called Eichsfeld. I had been there shortly after the frontier was opened, and things have changed a lot since then. The old houses in the centre and the churches have been renovated, and the place looks really pretty.

In the Middle Ages, Heiligenstadt belonged to the archbishopric of Mainz, and archbishop Siegfried II granted Heiligenstadt the rights of a town in 1227. It is the centre of the Eichsfeld since 1540. 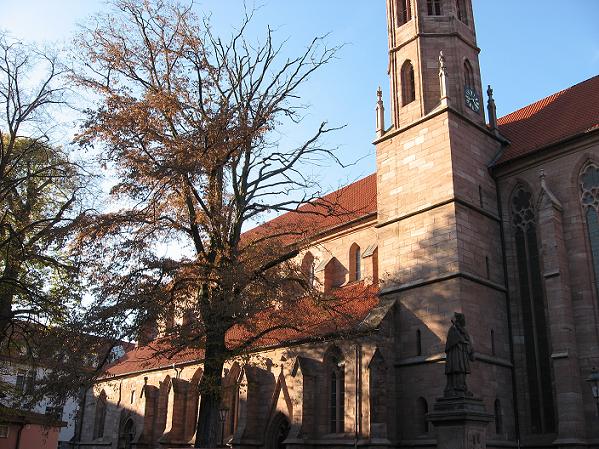 The architectural history of St. Martin in Heiligenstadt / Thuringia is a bit complicated. It is basically a Gothic church in the basilica style (the aisles are lower than the main nave), with an annexed crypt in late Romanesque style. The oldest part seems to be the choir and the main nave. One chronicle from 1276 mentions a request for donations to rebuild the old church,which obviously was in bad repair. No remains of this older building have been found so far. Another source points to the fact that the choir seems to have been finished in 1316. 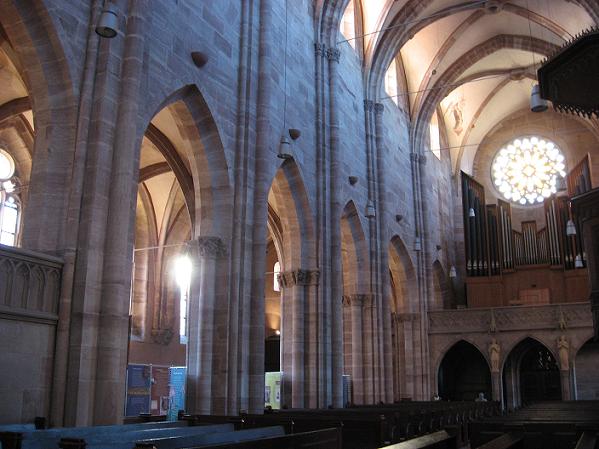 View from the choir to the south aisle
While the nave and choir are early Gothic style, the southern aisle is high Gothic, and the west facade with it's rosette window is late Gothic - in England called perpendicular or flamboyant style. But the interior of the church gives the impression of harmony, despite the long time that passed until the building was finished. 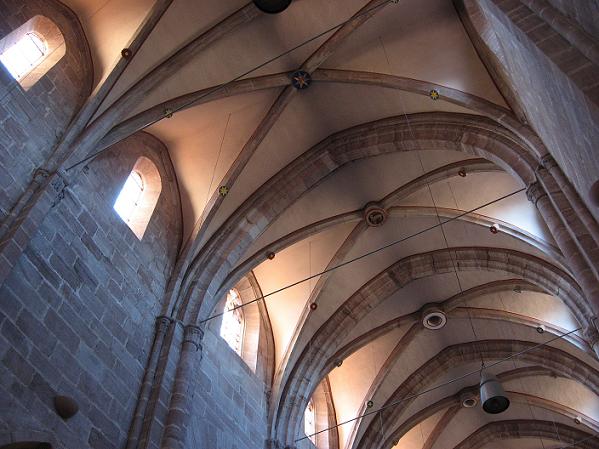 Main nave, ceiling
The arcs of the vaults are not rounded like in the Romanesque style, but pointed at the center. During the development of the Gothic style the pointed structure gets more angular and steep, abandoning the form of a true arc. 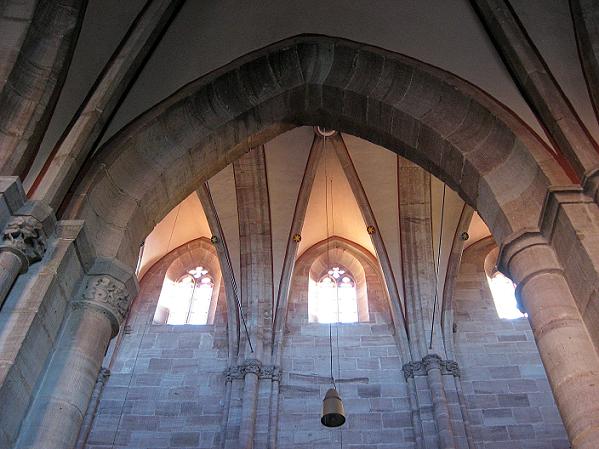 View to main nave from the north aisle.
The main nave looks higher than it is because of the unadorned walls. They are often structured by ornaments in other churches. The heavy 'bundled pillars' that divide the aisles from the main nave add to the effect. The aisles are more like rooms of their own here than in some other churches I've seen. 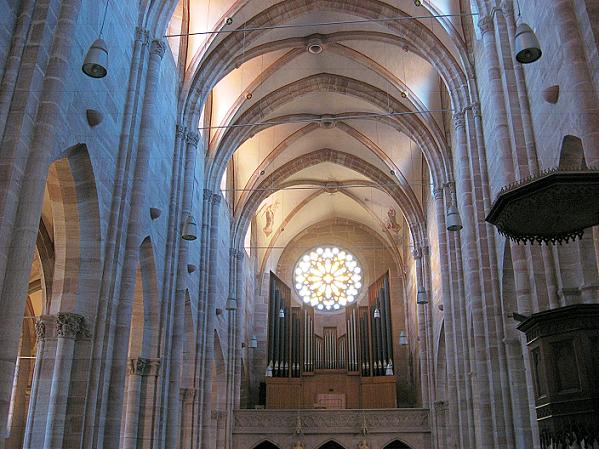 Main nave, view to the west
I aimed the camera slightly towards the ceiling so you can see the late afternoon light coming in through the clerestories while the lower part of the nave remains in twilight. It was a very peaceful atmosphere the day I visited the church. 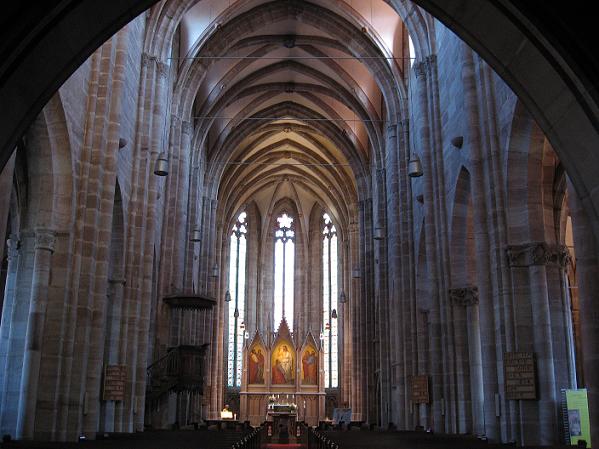 Main nave, view to the east with the choir windows
Architectonic tricks like the heavy bundled pillars and the unadorned walls lend the nave greater height. Fortunately, the changes from the Baroque times, like wall paintings, additional altars and pulpits and probably some of those gilded chubby angels had been removed as early as 1862, so the original structure is visible again. 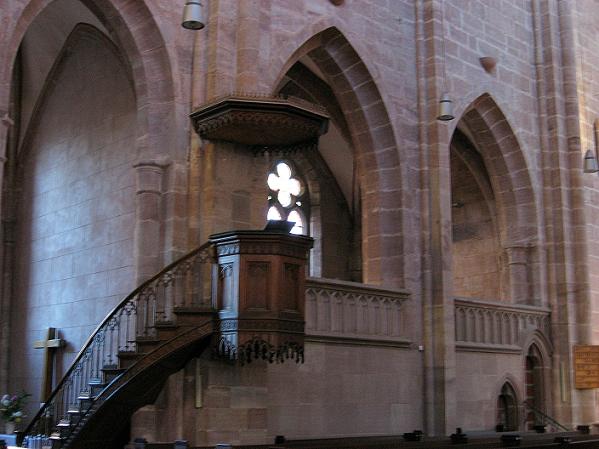 Pulpit on the north wall near the quire
Of course, the church could have been whitewashed or painted in the Middle ages as well. But 14th century frescoes would have fit better with the architecture, I'd say. I have not found any mention of traces of Medieaval colours on the walls in the guide book, so I don't think any have been found under all that Baroque stuff. I prefer the unadorned stone. 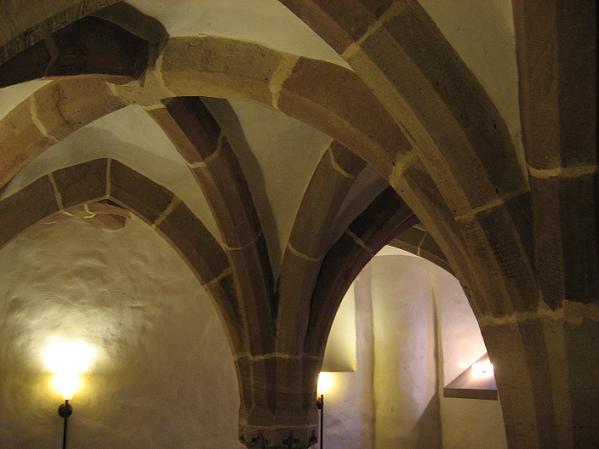 St. Martin, crypt from about 1250
The crypt must have belonged to an older church and was intergrated into the Gothic building. It is not clearly to be seen in the photos because of the angles, but this one shows an earlier stage where the rounded Romanesque style you may remember from Lippoldsberg (last picture in that post) just started to develop into the Gothic one. If you compare the vaults of the crypt with the arc on the second picture, you can see a slight difference. 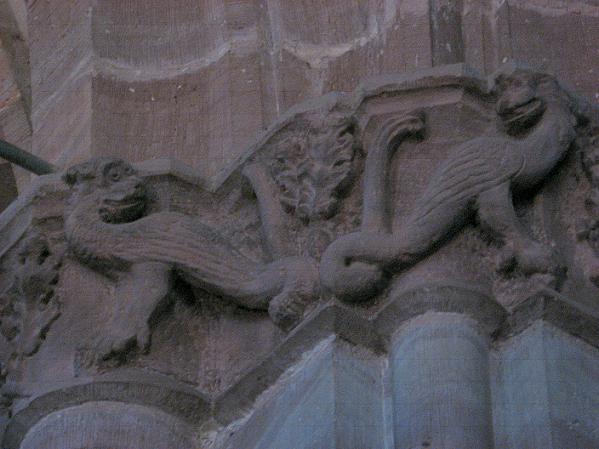 Dragon relief on a capital in the south aisle
These charming dragons with intertwining tails are part of a capital decoration. They date from 1360-70. Compared to the Italian Romanesque ornaments in Königslutter, the figures are more twisted with less regard to anatomy, leaves and other ornaments more splendid and wild, and the symmetry sometimes broken. The hunt had a symbolic meaning in the Middle ages, and so we find the motive here as well. 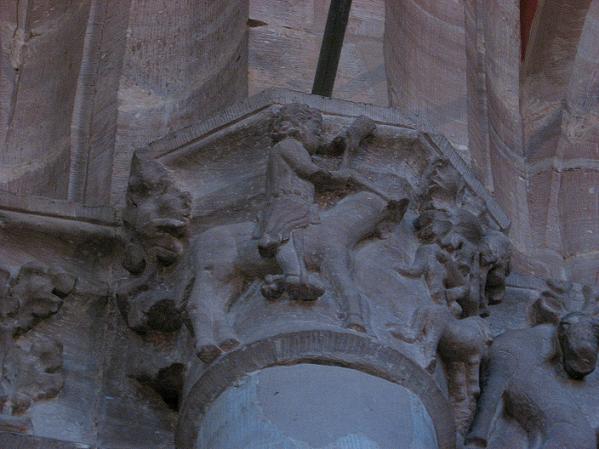 Hunting motive on a capital in the south aisle
Heiligenstadt had strong connections with the archbishopric of Mainz, which is interesting because it is a good distance east of the Rhine. The influence of the archbishops of Mainz in Saxony will tie in with the posts about our friend Otto of Northeim. For now I'll only say: men of the Church were probably worse intrigants than secular nobles. :) 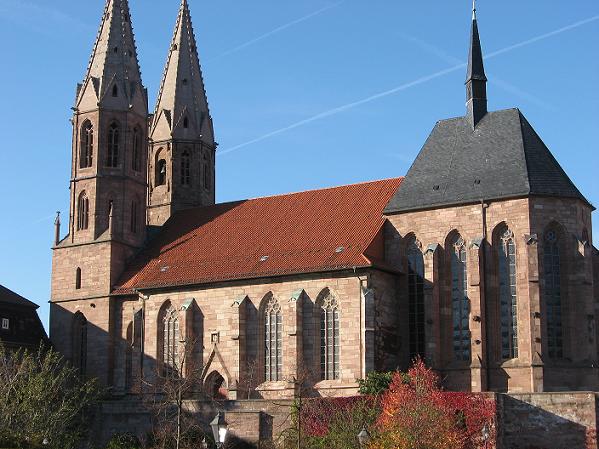 St. Mary Church, Heiligenstadt
St Mary Church is another pretty church in Heiligenstadt. The building is a three nave Gothic hall church, that means the aisles have the same height as the nave, different from the basilica type with the lower aisles which was prevalent in the Romanesque style. There is no transept. 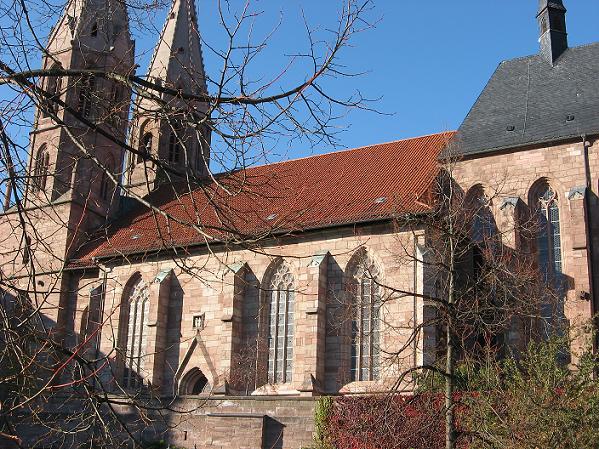 St Mary Church, south side
The oldest part of the church is the Westwerk with its two towers, erected about 1300. The naves date from the end of the 14th century, and the high choir to the east is the youngest part, built about 1420.

There must have been an older building, because a St Mary Church is mentioned in a chronicle from 1239 as the church of the town comunity. 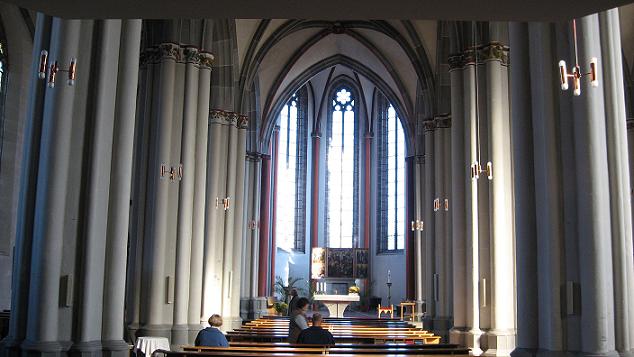 St Mary, Heiligenstadt, interior - the shot was taken with a wide angle objective
There is quite some light inside, because St. Mary is a hall church with aisles and nave the same height, so the light can come in through large windows at the aisles instead of smaller clerestories in the upper part of the nave. The white paint adds to the effect as well. The paint was added during the 1970ies restoration, based on some traces of old colours, while the 19th century neo-Gothic decorations got ereased. 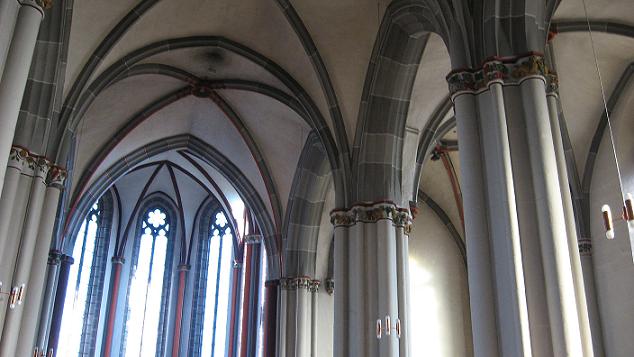 View towards the choir ceiling which is painted as well
If you look closely, you'll see that the bundled pillars are not much different from St.Martin, but to enhance the hall effect, the choir was rebuilt in the late 14th century in a larger scale and to the same height as the nave and aisles.
¶ February 11, 2008

Comments:
Gorgeous architecture. I love Gothic arches. And the
atmosphere in churches and cathedrals, even though I'm not religious. Their serenity is incredible.

Though the sheer skill of the architecture, gorgeous though it is, lets us know those clergy were fair raking in the cash. Destroys the illusion a little bit. ;)

Yep, as Goethe has his Mephistopheles say in Faust, The Church, it has a big stomach. It can well take this sin (meaning the jewels Faust gave to Gretchen) without corruption.

I'm not religious, either, but I love old churches as well.

It would be interesting to see how the colored stone looked in its day--though I think I too prefer the unadorned stone.

Beautiful. I prefer the natural stone, too.

Wonderful!
You captured the paradox of stone and spirit.

Susan,
I think colour taste in former times was more garish, probably due to the overall drabness of the common people's life (undyed wool, wattle and daub huts, earthenware dishes ...) and thus attending mass in a church with frescoes and decorations was indeed a special time of the day or week.

Thanks, Bernita. I'm always glad when I can catch more than what's visible to the eye on a photo.

I've heard it argued that church paintings worked like a sort of strip cartoon, illustrating scenes from the Bible for people who didn't have access to books and/or couldn't read.