20 Mar 2008
The Architecture of York Minster
You can imagine that it isn't easy to capture pictures of the outside of York Minster that do the magnificient building even a shade of justice. But I tried. 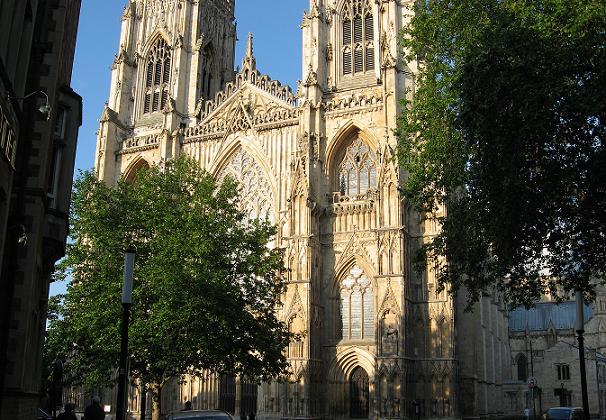 Processions in the Middle ages would have entered in the west and passed the length of the building, but today, the south transept gate with the rosette window serves as main entrance. 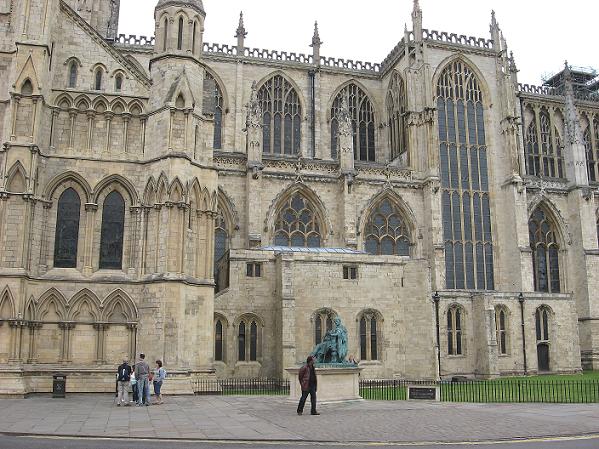 East nave
The east nave shows an additional, shorter transept; that's the place where the quire is located inside. 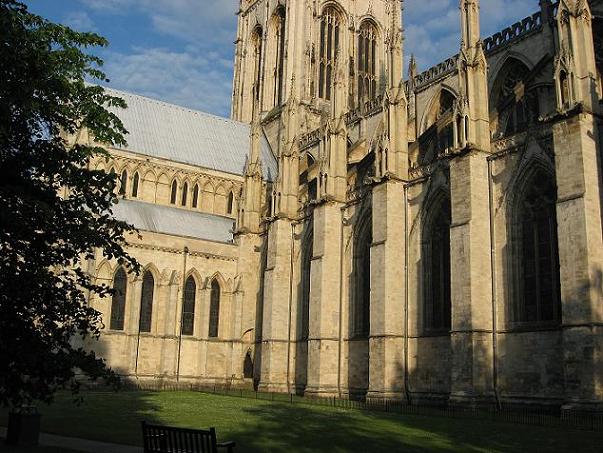 Crossing tower
Part of the main tower situated atop the crossing, seen from the west in the evening sun. 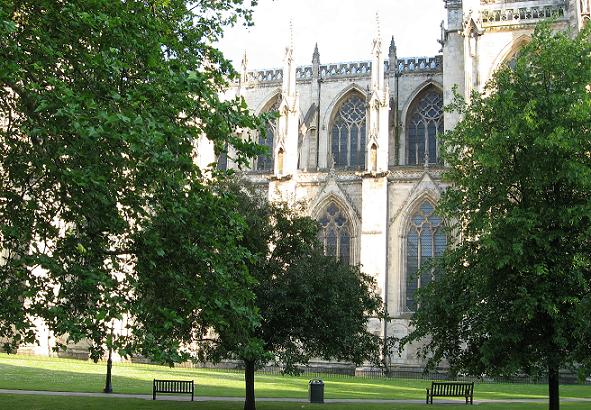 West nave
The Minster of York is the largest Gothic cathedral north of the Alps. Its ground plan is a bit different from the German churches I've visited. Their structure usually is a main nave plus side naves in either basilica or hall design, with a choir and apsis on the eastern end. Most of them have a transept that cuts the nave into a larger main and shorter choir segment, much like a cross. While the crossing sometimes has a tower, the main tower(s) are on part of the westwork. 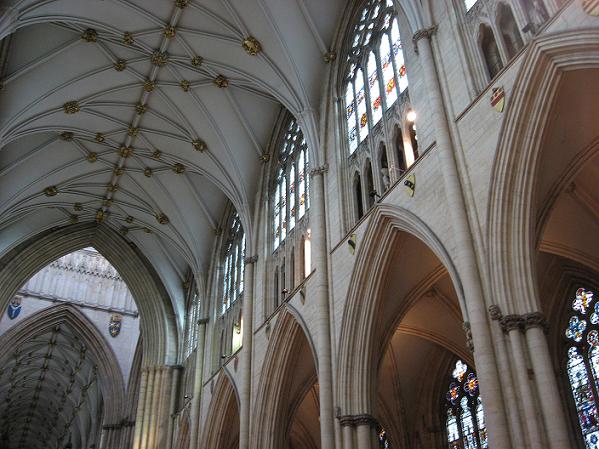 Western nave (decorated style)
York Minster, which shows several stages of Gothic architecture, has two west-east running naves of the same length (the east nave holding the quire), the western one in basilica, the eastern in hall style, cut by a transept in the middle, and the crossing tower is the largest tower of the building. 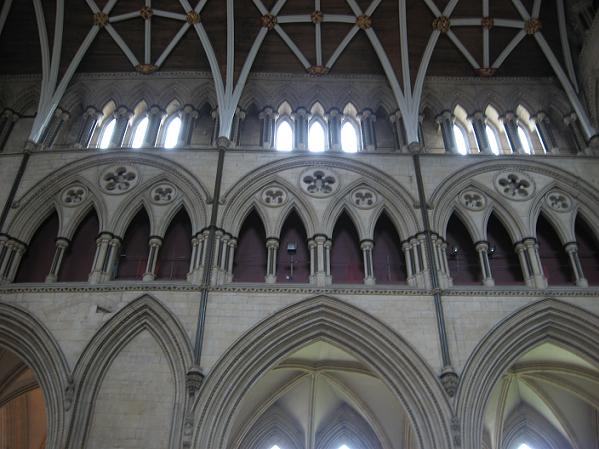 North transept (early English style)
The different stages of architecture are visible in the different parts of the minster. The transept is Early English (1220-1260) which responds to the German Frühgotik, the western nave is Decorated (12-80-1350) and the eastern nave, the youngest, Perpendicular (built 1362-1472). 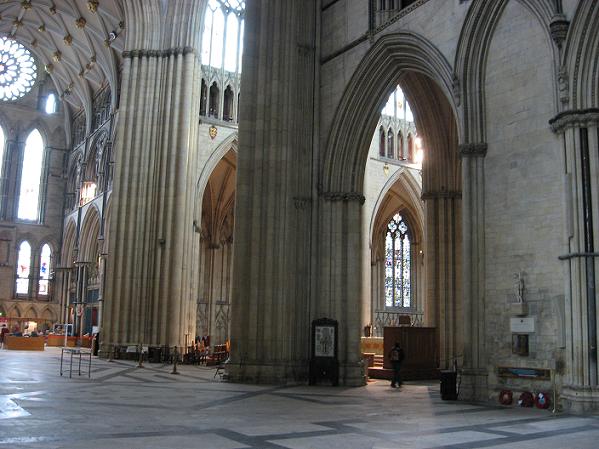 View from the crossing, facing south-west
I don't know if Katherine Kurtz visualised a particular church when she wrote the coronation scene in Deryni Rising, but I see York in that scene - with some additions like the sigils on the marble flagstones, of course. 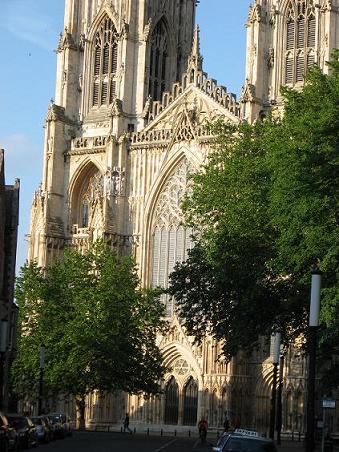 Another exterior view of the west side
As usual, older buildings preceeded the minster, but in this case the first church probably stood at a different place in York. It was built for the baptism of Edwin of Northumbria on Easter Sunday 627, who then ordered the small wooden church to be rebuilt in stone.

The stone church was enlarged over time. It survived the times of Viking settlement but was badly damaged by fire when the Normans conquered the city in 1069. Poor Normans, nobody really wanted them around, and York aka Jorvik had enough of the Nord-men since they sent Erik Bloodaxe packing in 954. But the Normans stayed, and eventually archbishop Thomas of Bayeux built a new church in 1080 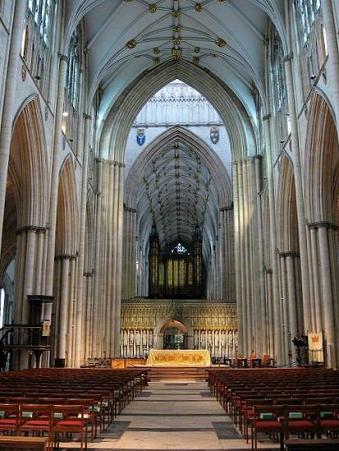 View towards the quire
During the mid twelfth century the cathedral was enlarged, and in 1215, the transepts were added under the reign of archbishop Walter Gray. His successor extended the western nave which was completed as late as 1360. The quire was completed in 1405, the central tower replaced after it had collapsed, and as last step, the western towers were erected between 1433 - 1472. Thus it took about 250 years to build the Minster we know today. 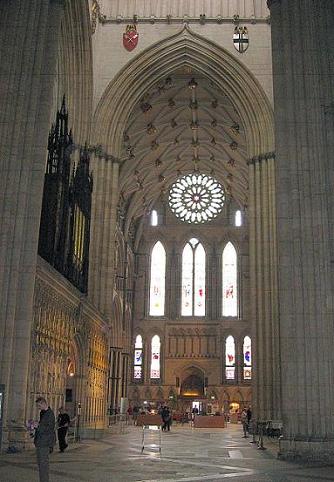 View towards the south entrance and the rosette window
After that, York Minster has changed but little. In 1984, a fire caused by lightning destroyed part of the south transept which has been restored. Renovations are going on on a regular basis since the 1970ies, and it was in course of the ongoing renovations that the remains of the preatorium of the Roman fort have been found under the minster.
¶ March 20, 2008

Comments:
Really nice photos, Gabriele. York Minster is so big it's hard to fit in a viewfinder.

I just read her trilogy not long ago - and yes, it looks Just like I'd imagine the cathedral in the book!
Glorious building!!

What a gorgeous building. Your second photo reminds me a lot of the throne room of one of the castles in my old fantasy piece. It just needs a few more banners, and the throne where the altar is...

These are the best photos of York Minster I've ever seen. They really show its uplifting grandeur. Same with your photos of German cathedrals. Have a (virtual) wee dram of Laphroaig on me!

Thank you, Shelley. Yes, the minster was a challenge to photograph; after that, even Speyer cathedral seemed esay.

Sam, I wonder if she had a real cathedral in mind.

Kirsten, Fantasy buildings tend to come out on the big side, don't they. Just look at the Wall in GRR Martin's A Song of Ice and Fire, and compare it with poor little Hadrian's Wall. :)

Thank you very much, Sarah. And cheers! :)

I've never been to York Minster (yet), but wow, what a fantastic place! Great photos. And I hope you get to Gwynedd - it's one of my favorite places, especially the native Welsh castles :-)

Thank, Lady D. York is worth a visit.
The Gwynedd I mentioned is a fictive Kingdom in Katherine Kurtz' Deryni novels, but I'd like to see the real place as well. :)

What a beautiful building! It makes me realize that the one drawback to living in California is that we don't have much in the way of history. You're so lucky!

Meghan, I would not want to live outside Europe for the world. I'd miss the history too much.

Nice shack. Be nice looking when they get it finished. The outside is all niches without statues.
When I was there, they didn't let me take photographs unless I paid some ridiculous amount of money for a sticker to put on my camera. I decided that the postcards were better anyway, more professional. But then....I am not as good a photographer as you. I tried to capture the grandeur of Wells, the majesty of Yorkminster, and the frou-frou complexity of Westiminster, and failed every time.

Travel MUST be a priority for anyone, and ESPECIALLY for anyone who fancies themselves a writer, otherwise the writing sometimes come across as parochial and too clever by half. But that being said, some imaginations are so big that the Collosseum becomes the tip of the tower of babel, Hadrian's wall becomes 20 feet high and impregnable (and finished!), and Jerusalem sheds its dirty slime and its Via Delarosa becomes a magical place, and when you go there, the reality really bites!

I can't tell you how much I am enjoying those pictures Gabriele, and your commentary is spot on.

They don't charge for photographing in York Minster any longer, but I've come across that in other places. Sometimes it helps to be a woman with a pretty smile. :)

Well, the Hadrian's Wall was never impregnable, it only made it more difficult for the tribes to attack. But there were several instances when they did work together to a degree that they managed to break through - or climb over. But in the long run, the Romans always kicked them back.