4 Mar 2008
Squirrels and a Tower
That little guy is up to no good, I'm sure. If it's not covering up for Constance's gnomes, it's squirreling away a plot. Or the bones of a Roman. After all, I found the fluffy tailed critter near the Roman multiangular tower. 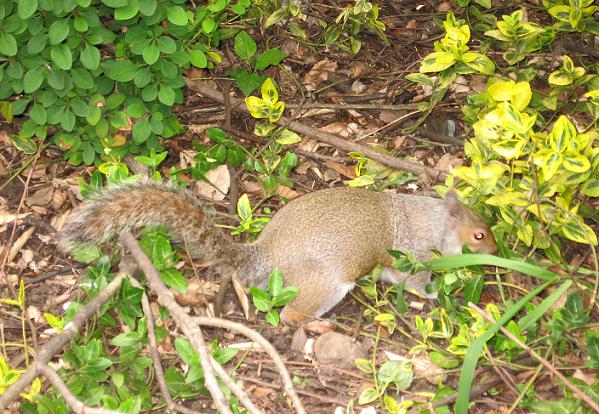 Grey squirrel in the Museum Gardens

Eboracum was built as legionary fort - that is, larger than the auxiliary forts at the Hadrian's Wall and the Limes - in 70 AD. A town soon developed around the fort and was protected by a wall. The Roman walls formed the basis of the Mediaeval town defenses. 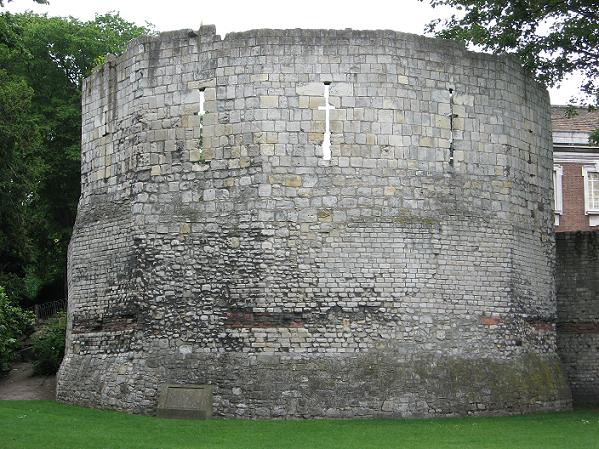 Roman multiangular tower
The multiangular tower was erected during the time the Emperor Septimius Severus spent in York in 209-211 AD. Severus strengthened the walls and added a number of towers. One can't blame him; he had a lot of troubles with the tribes.

The tower that once stood in the west corner of the fortress has ten sides and rises to 30ft. The upper part with the different stones and archer slits is Mediaeval, but the lower rows of stones are Roman. 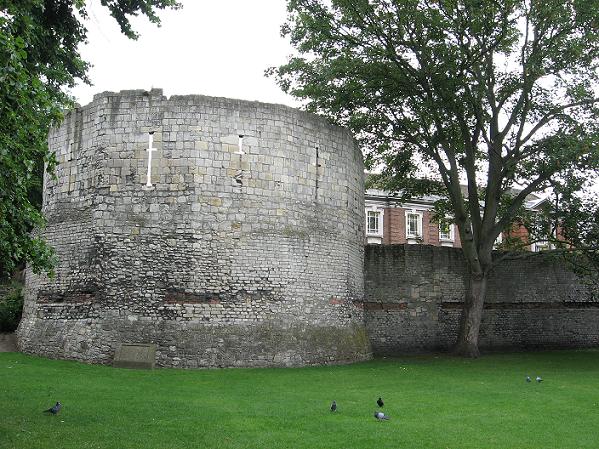 Another shot of the tower
It kept the tribes out, but not the Danes in 867. The Danes restored the walls and towers and added another layer of finds to the York soil some of which can be seen in the Jorvik Museum. During the Middle Ages, the town walls were fortified several times, and gates added, like Monk Bar Gate.

More would be left of the town walls if not part of them had been dismantled in 1800. Which proves that George II had less power than some of his Mediaeval predecessors who'd have put the heads of the members of that Let's Tear Them Walls Down They Cost Money-coporation on spikes to display on the walls. 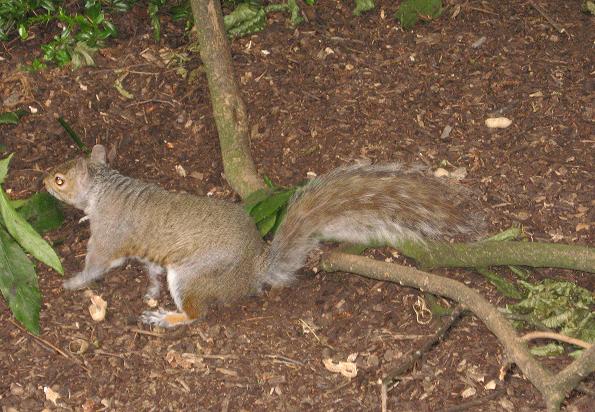 Look, squirrel brought a friend. Notice the gleeful grin - he's just hidden a plot about Septimius Severus and his dysfunctional sons, plus assorted other characters and a battle or two. I bet the wee rascal has a red squirreled friend or two in Germany. But whatever comes out of it; the idea is shelved for now.  ¶ March 04, 2008

Comments:
You're so lucky you get to see all of these great things built by the Romans! Having never been to Europe I can only imagine how great it must be to turn a corner and come across something 2000 (or more) years old.

I could have sworn I saw one of his white furred cousins in the mountains of North Carolina this winter. I've gotta go back to England, so much I missed the first time. :)

York. Gotta love a place that calls the roads "gates", that calls gates "bars" and of course they call bars "pubs". A group of four streets with the same name that surround a park is called a "circle", even though it is clearly square, and a laneway is called a "snickett". (onamatapea...you can hear the snickett snickett snicket of your hobnails as you walk them.) Of course, it is only called a snickett if it is paved. The locals use a maze of "ginnels", essentially little laneways in and around the houses, to "ginnel" around because of course you can't use the roads...they are too crowded!

Did you find out the real name for "Grape Lane" yet?

Cute squirrels :-) You have to hand it to the Roman stonemasons, they built to last. The medieval builders seem to have just added their bit to the top of the Roman stonework.

Doesn't York's Grape Lane get a mention in Sharon Penman's Sunne in Splendour?

"Let's Tear Them Walls Down They Cost Money-coporation on spikes to display on the walls."
I'm all for pike-heading, barbarian that I am.

Hey, gnomes would never stoop to using squirrels for spies. Too squirrelly. The pigeons, now, I would keep an eye on them...

"York. Gotta love a place that calls the roads "gates", that calls gates "bars" and of course they call bars "pubs". A group of four streets with the same name that surround a park is called a "circle", even though it is clearly square..."

I think I would love it there. *g* Since nothing usually makes sense to me anyway, I'd feel right at home. Lost!

Meghan, yes, it's nice to live surrounded by history. I would not feel at home in a country that didn't offer me that.

Ann, even living in a county doesn't give you the time to see everything. There are still places in Germany where I haven't been.

Lol Bill, those Yorkists are weird. It probably was all the fault of those pesky Woodvilles. :)

Carla, they did. There are places our friend Aelius Rufus would feel more at home than Segedunum, but I picked that because there a lot has changed. Maybe I should send him to Trier to make up for the shock. :)

Lol, Constance, you need to get a gnome trained as guide, then.

Loved the pictures! (And you're absolutely right about those Woodvilles. :)

I do feel the lack of being surrounded by history where I live. On the other hand, my 7-year-old house is almost historical given all the ones that have gone up since then.

Both those squirrels have evil looking eyes. They're definitely up to mischief.

Susan, old houses may be nice to look at, but they have disadvantages when living in them. I lived in one from 1921 for some years, and the high ceilings made heating costs soar.

Shelley, demon plot squirrels of doom is what they are. :)