1 Apr 2008
Aelius Rufus Does a Meme
I'll have to do something evil to Sam and Wynn who tagged me for a meme, lol. Since I'm tired of the things, I've asked Aelius Rufus to do it for me this time.

Four Jobs I've Had
I've had only one: soldier in the second Raetian cohors equitata. Maybe I'll get promoted to decurio some day.

Four Movies I could Watch Over and Over
Movies? You mean those theatre performances on a curtain Merlinus spoke about? There are some I'd like to see because I would get a good laugh out of them: Gladiator, King Arthur, The Last Legion.

Four People Who Email me Regularly
Don't know about email, but I do write to my father and he sometimes writes back. He can write you know, he's been in the Roman army for 25 years and got promoted to first decurio a few years before his retirement.

Four Shows That I Watch
Shows? You mean those mini theatre thingies you can watch in your insula? I've heard there is one about Roma that may be interesting, involving a lot of juicy scandals during the time of Caesar and the deified Augustus. 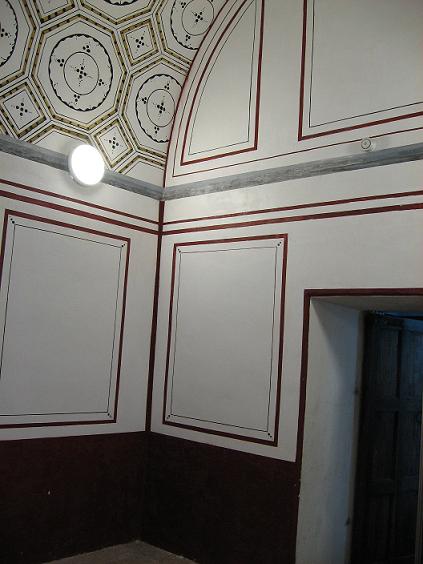 (Left: Another mural detail from the baths in Sege-dunum / Wallsend)

Four Places You'd Like to Be Right Now?
Back at our farm in the Raetian Alpes. Or have another trip to the future with Merlinus. Definitely not standing sentinel at the main gate in Arcataunum. It's raining. Again.

Four Favourite Foods
I like honey cakes with raisins, goat cheese with pepper and honey, fish in an egg and herb crust, and venison stew, though we get the latter way too seldom.

Four Places I Have Visited
Besides my 'home' fort in Germania and Mogunt-iacum, I've been to Britannia and seen the Wall and some places along it. There is talk that I may get a commission with the troops in Isca Silurnum in Britannia for a few months. It could be interesting if those Silures don't start another rebellion just then. I'd like to see Roma, but I think that'll have to wait until retirement.

Four Events I'm Looking Forward to This Year
The Saturnalia, and the games with the garrisons of some other Limes forts. And hopefully we'll get a new praefectus castrorum this year; he can't be worse than the one we have right now. Oh, and I'm looking forward to the day Tullius Ferrarius will finally get caught with his grubby paws in the money chest of our burial funds.

I'm supposed to tag five people, whatever that means. Hm, if I could get Merlinus to do it, that would be fun. Is there anyone who knows where those druid guys hang out when they're not time traveling?

Comments:
Ha ha! I've done those for my characters before, because I'm tired of doing memes about myself, too. Except I put my characters into the modern US and answered them that way. It was pretty funny what they liked watching and listening to. One of them even has an electric guitar. O-kay...

The food sounds good, and the last event is hilarious! :-P

Ya know, I think I saw Merlinus at the tavern last night. Drinking some beer and eating a really big cheeseburger. I hear he got mugged by a gang of plotbunnies on his way home. :)

Lol Jen, that could be a fun exercise, too. I wonder if my charioteer Ciaran would prefer Ferrari or Mercedes these days. ;)

Cheeseburger?! Oh well, as long as he doesn't ask for garum sauce to go with it ....
The plotbunnies are his fault, he shouldn't grin at them like that.

Well, all the druids I'm acquainted with tend to hang out in the woods after dark, finding ways to mess with the heads of my Roman MCs.

...they promise me there's a plot purpose to it all.

I wouldn't recommend Aelius seek them out alone. They like to sacrifice characters to the dark god of the plotbunnies. They say they have everything under control, but I think all those mistletoe potions are beginning to take their toll...

I have to agree about the food. Those honey cakes sound like just the thing.

Tell me, Kirsten. There's one in Eagle of the Sea who definitely had more mistletoe wine than is good for him. And now he wants to become Calgacus' chief advisor.

Shelley, I had some Roman food in Trier. It's a bit unusual with the combination of herbs and spices, but quite yummy.

Neat, Gabriele.
Liked the food too.

I've been tagged for this one as well. Great idea to get one of your characters to do it for you though. I think I'll do the same.

Fun idea! Bravo! Rufus sounds very informed about movies - Merlinus that time-traveling magician talks too much when he's had too much spiced wine!
:-D

Lol Sam, Merlinus likes to show off when he's in his cups. Better don't believe everything he tells. ;)

Hmm, I may have to try this with my characters. I might learn something new!

I've made a few Roman recipes for reenactment. I draw the line at garum. Won't make it, won't eat it, no way, no how. *g* I don't like fish under the best circumstances, let alone with some mileage on it...

Garum is just fishy ketchup. You can pour it over anything. :)

Though the Romans had no fries.

Great one! I've been missing these character memes!

By the way, I have some druids illegally camped at the end of my garden by my fishpond - or are they garden gnomes? - anyway - you're welcome to them!

Lady D, in case it's gnomes, ask Constance. She is the one who knows about the little buggers. In case of druids, a fence of bones and skulls should keep them out. :)

Constance, well you probably can pour ketchup over ice cream. ;)

I'd like to point out, just because you CAN doesn't mean you SHOULD. :) Besides, where would I put my chocolate syrup then??

Grilled gnome with ketchup? Doesn't sound quite yummy, in case I can get them filleted. Too many bones, else. ;)

gnomes are probably stringy, too. Not to mention that eerie feeling of your dinner staring back up at you from the plate... and plotting chocolate covered revenge.

(Word verif: xytaxubr! The magical word gnomes shout as they storm the grill to rescue their basted uncle elmer...

Lol, the word verification gets creative sometimes, but without it the spambots would take over, and I'd sure prefer the gnomes to those.