9 Apr 2008
And order you to have made a good and strong gaol
In June 1330, William Melton Archbishop of York wrote the following letter to one Thomas Fox in Hexham:

‘William, by the Grace of God, Archbishop of York, to our beloved in Christ, Thomas Fox our receiver in Hexhamshire, greeting. We wish and order you to have made a good and strong gaol, in which our prisoners can be securely held and guarded and the expenses incurred in the building of this we will allow out of your account.’ (Borthwick Institute, Reg. 9A f.45, quote found on the official website of the Gaol)

The result can be seen here. 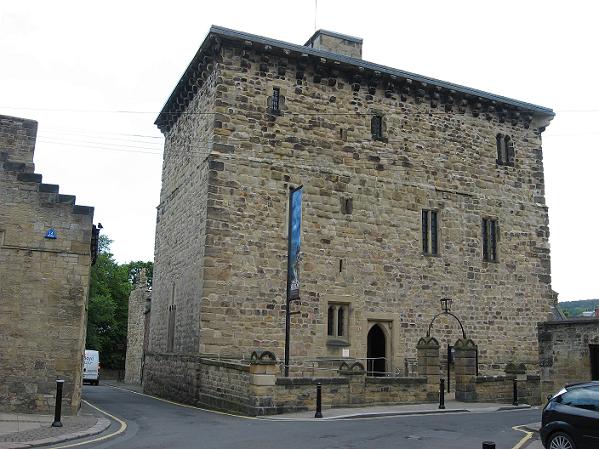 Hexham Gaol was the first purpose-built prison in England. Before, prisons were rooms adapted from other buildings (I've mentioned prisoners were for example kept in Carlisle Castle, either the gatehouse or the keep).

The Archbishop of York ruled over Hexhamshire through his bailiff and other officials. Looks like it was an unruly place that he thought a decent prison was neccessary. Already in 1332 he wanted additional equipment for the gaol. His prisoners must have been Scots to have caused to much trouble. *grin*

‘William, by the Grace of God, Archbishop of York to our beloved master Robert de Bridelington, Steward of our lands, greeting. We wish and order you to repair our gaol at Hexham and to provide shackles, manacles, fetters and other items necessary to the repair of the gaol and the guarding of the prisoners. Wherefore we appoint John de Cawood, barber, bearer of these letters, sergeant of our manor and town of Hexham and keeper of the gaol. And we wish that you will allow the said John for his salary and expenses as was automany the sum of two pence a day.’ (Borthwick Institute, Reg. 9B. F.541)

So William got the lot chained up. Probably in the cellar where you can today see the dungeon by going down in a glass elevator. The chains and manacles are still there, plus some straw on the ground. Not very comfortable. The other three storeys were used for less troublesome, or more noble prisoners who demanded a somewhat better treatment, and as guardroom.

The gaol has been in use as such over the centuries and came to some fame during the time of the Border Reivers in the 16th century. They were basically a belligerent mix of robbers, feuding clans and guerrilla warriors along the Scottish / English border. I admit I don't know much about the Reivers besides what I saw in the exhibitions in Hexham and the Tullie House in Carlisle. Considering the high costs and bad exchange rates, I could not buy every book I wanted and had to forego getting one about the Reivers.

Those were very troubled times and the gaol used a lot. Though it wasn't that secure; there have been several escapes, either because of bribed guards or help from outside. One of the most famous was the one of Robert More in 1538. He was a priest who got on the wrong side of our friend Henry of the Many Wives who had just sacked the wealth of the Catholic Church. More was suspected to be a spy for the Scots - who were Catholics and in league with France - and incarcerated in Hexham Gaol. For some reason, maybe an outbreak of plague, the responsible officials were somewhere else, the guards went dining, and the gaol was promptly broken into by a 'band of outlaws', a feat that didn't prove difficult because the locks were rusty and none of the prisoners in irons. So More and a bunch of others took a night walk and forgot to return. The blame was laid on the Reivers, particularly because among the escapees were an Armstrong and two Dodd, notorious Reiver clans.

I don't know what Archbishop William would have said about that. 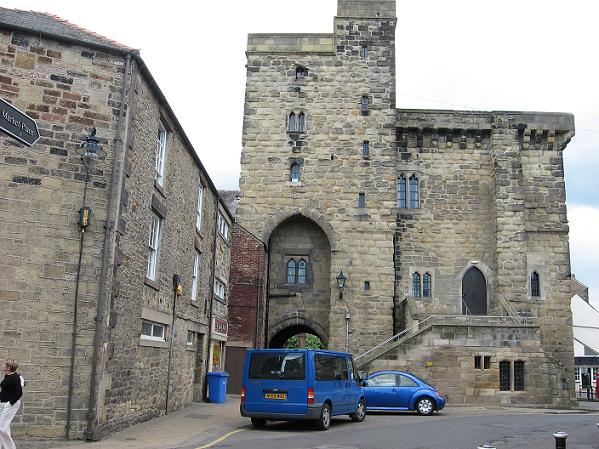 Moot Hall with gatehouse tower
The gaol was in use as prison until 1820 and then used for different functions until restoration began in 1973, and the building was made into a tourist attraction with a museum about the Reivers and exhibitions in the upper storeys.

Opposite the gaol stands the moot hall, a combination of the old bailiff's hall and a gatehouse tower which was added about 1400 as result of the constant threat by the Scottish armies. At first, the bailiff of the Archbishop of York held court in the hall, and later it was used as town hall for Hexham. Today, it is a place for art exhibitions.  ¶ April 09, 2008

Comments:
Cool, and nice photoes. I was in Hexham last year but didn't have time to do more of a tour than the abbey. Seems like I missed a fair bit! "First purpose-built gaol" is a fine honour for any town to claim isn't it? :-)

Thank you, Jarrett. I've seen the abbey as well; there's a post about it I wrote before I 'met' your blog. :)

I have more pics of the abbey, but the next posts will deal with German history for a change.

Interesting post! I'm a big fan of William Melton (and I've mentioned him on my blog today too - he's probably never been so popular. ;)

Yeah, I saw it. Now you only need to write about that unfortunate de Harcla guy and we're going to channel each other with every second post or so. :)

Wow, what a gaol!

Melton actually owned the land on which I live now - the village of Hucclecote - but there are no gaols here so we were obviously a more peaceful and law-abiding lot!

Susan, as long as the locks and bars are in good condition. :)

Lady D, now that's fun, to live on land owned by someone from a historical period you specialise in.