14 Apr 2008
Romanesque Murals in Vernawahlshausen
I've mentioned that some villages in Germany have churches of great age and sometimes unexpected beauty. One of these can be found in a village called Vernawahlshausen (not only Wales has long names), built in early Romanesque style about 1100. It's a simple, rectangular building with no aisles. The half timbered tower was added in 1744. 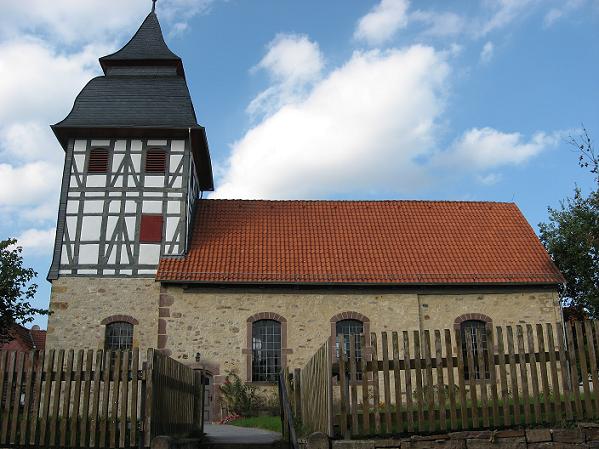 The eastern part dates back to about 1100. It now holds the altar, but originally it was a choir with gross grain vault but no apse. There may have been an even older building, a chapel dedicated to St. Margarethe built by monks from Corvey, one of the great German monastic centres which had its roots in the Cluny tradition. 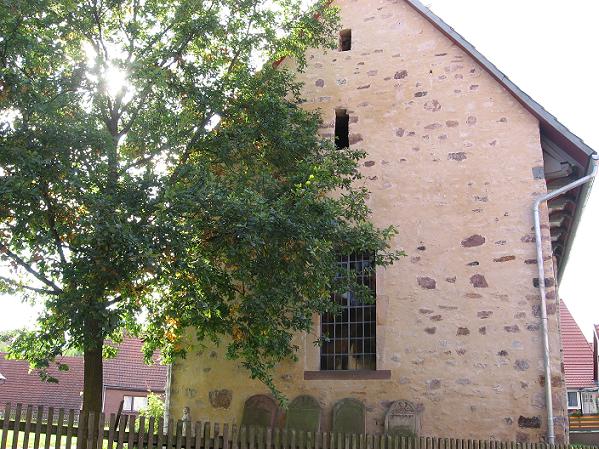 East wall; the oldest part of the building.
The church belonged to the Dukes of Braunschweig until 1296, then went to the Abbey of Lippoldsberg; and after the reformation in 1538, the patronship came to the landgraves of Hessen. 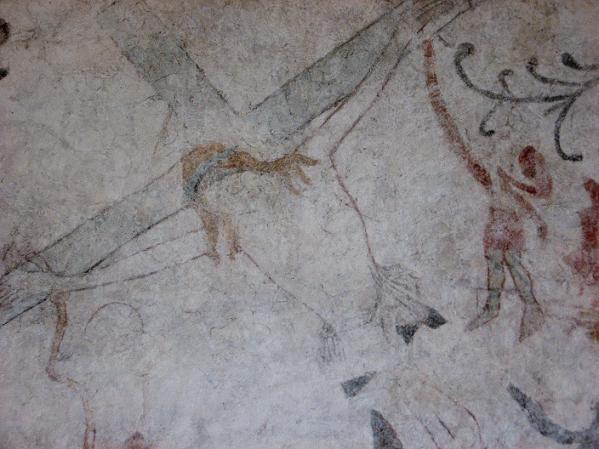 Descent from the Cross, Romanesque mural
When restoration work was done in 1955, some Gothic and Romanesque mural paintings were discovered which the Landgrave Moritz of Hessen, a stout Calvinist, had covered with a layer of white paint in the 17th century. 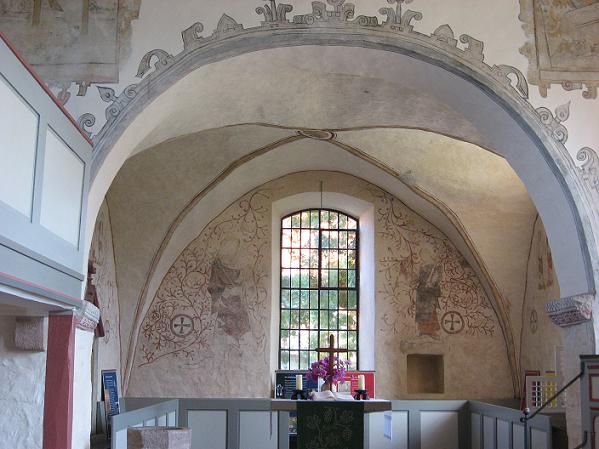 View into the altar room with the rediscovered murals
Fresco style murals can also be found in the nearby church of Bursfelde Abbey. (Edited 2016: Some of those have been refreshed; I took some new photos of them.) 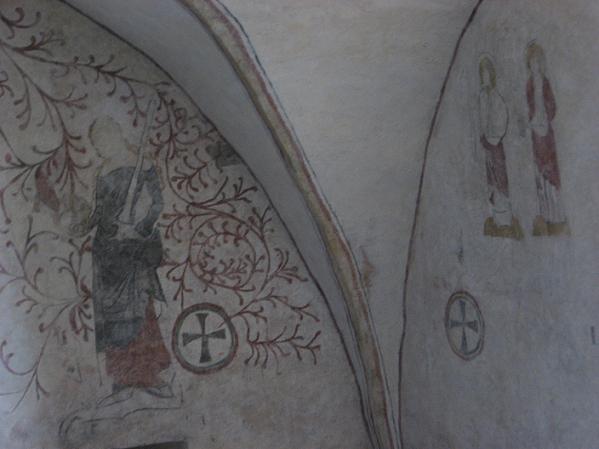 Closeup of some Romanesque murals:
in the centre the archangel Michael, to the right two apostles
In 1589, the nave was expanded, and thereafter either a traveling painter, or a more or less talented guy from the village added some paintings on the sides of the gallery. Whoever did the job might have benefitted from some lessons in human anatomy. The snake looks pretty good, though. 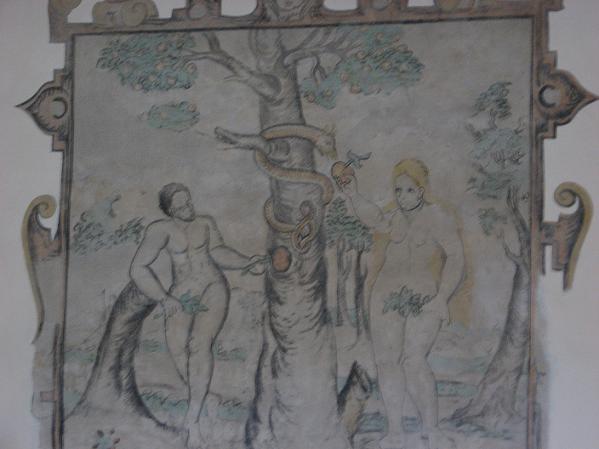 Adam and Eve, Rennaissance painting
The vicar at that time - and as rumor has it, his wife in particular - thought his parishioners should not be exposed to such sinful paintings. Yes, you can see Eva's boobies. The offending pictures were painted over with white colour as well and have been rediscovered in 1955, together with the Romanesque murals in the choir.  ¶ April 14, 2008

Comments:
This blog is rated M for Mature! :p

Yes, the old blue law exception, “but it’s in the Bible.”

Churches, especially before the printing press told a story with the murals and artwork. Are the murals left just stand alone out of context or is it a more complete set?

Lucky that they were still recoverable under the whitewash :-)

Interesting that people were still painting church murals in the 1580s when printed vernacular Bibles and literacy were becoming more widespread. I had a vague idea that the rise of literacy and printing meant murals went out of fashion because people no longer needed them, being more able to read the text for themselves. But perhaps prudery had at least as much to do with it - the Bible is full of eye-popping stuff :-)

Hank, the murals are incomplete because not all details survived time and whitewashing, but there may have been something like Passion and Ascension.

Carla, maybe it they still did it because it looks pretty - when the anatomy isn't off. ;) What I found interesting is that the chuch was protestant at that time, and the Protestants weren't so fond of decoration.

I can just imagine some of the reactions to the Adam and Eve mural. It's likely that the whitewash saved the mural from further damage. The snake was very realistic. :)

The murals are charming.

Shelley, it would be even more fun without the fig leaves. :)

They are, Bernita. The Romanesque mural may have been of brighter colour originally, but the faded shades are more elegant.