16 Apr 2008
Vows and Secret Meetings - The History of Lippoldsberg Abbey, part 1
As usual, there had been an older building on the site of Lippoldsberg Abbey. Some time between 1051-56, archbishop Luitpold (Lippold) of Mainz founded Lippoldsberg and had the first wooden chapel built. I've mentioned before that the possesions of the archbishop of Mainz stretched from the Rhine all the way into Thuringia, and the Weser was one station on the way there, with a ford near the future Lippoldsberg. Luitpold bought the land from the monastery at Corvey, probably to ensure an unhindered passage on his 'own' lands all the way to Erfurt in Thuringia (today the county capital). 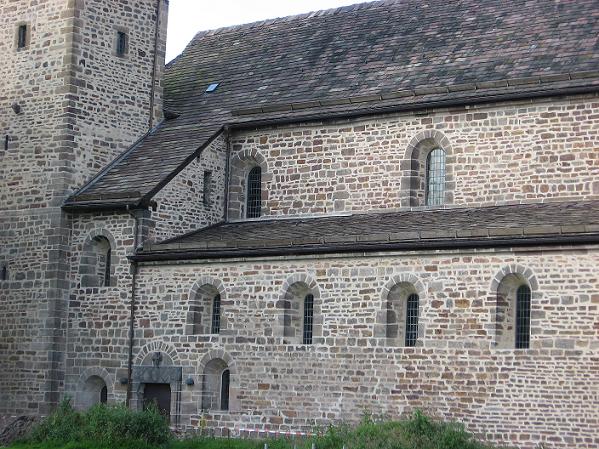 Lippoldsberg Church, view from the south, detail of the angle at the west tower

His successor Siegfried got deeply embroiled in the investiture controversy, the contest between the Emperor (notably Heinrich IV) and pope Gregory VII about the appointment of church officials and the overall role of the Church in relation to the secular power. A quarrel that found its way to England as well where Heinrich's namesake Henry I had his share of troubles with the Gregorian papacy. 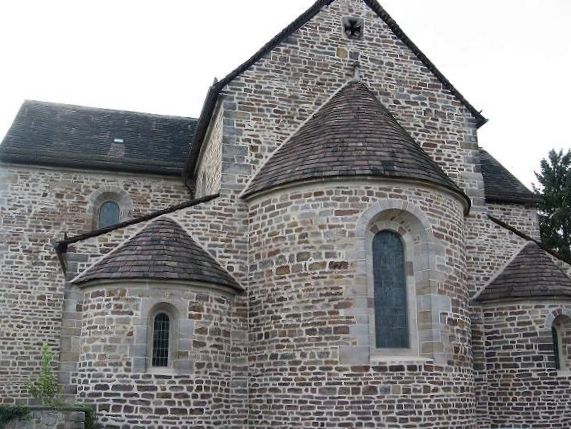 Choir with triple apse attached to nave and aisles, and transept behind
Archbishop Siegfried I of Mainz - who also was a prince of the realm - changed sides several time during the conflict, and managed to get excommunicated in the process (can we say oops?). He obviously did say 'oops, soory', because some time later we find him back in grace and member of the alliance against Heinrich IV. It didn't do Siegfried much good though, because he was taken prisoner by Heinrich in 1178 and spent the next four years in captivity.

The Chronicon of the Prioress Margaretha from 1151 mentions that Siegfried vowed to build a stone church in Lippoldsberg upon his release. He'd gotten better in keeping promises, because a new church, dedicated to St. George, was indeed built in 1082; some remains of foundations have been discovered during restoration work in 1966. The church got a nice amount of land and tithes as well. View from the north side
In 1089, a lady's chapterhouse or nunnery was established. We can't be sure which one, though there are some arguments in favour of a chapterhouse. The difference between those and a nunnery was that the women, which were usually daughters and widows of noble birth, didn't take permanent vows so they could leave and marry if familiy politics required it. But as long as they lived in the monastery, they vowed chastity and obedience, and kept vigils the same way nuns did.

The Chronicon, based on fake chartes for this event, mentions an obscure Betto as founder, but it was most probably archbishop Ruthard of Mainz. Another charte dating between 1099 and 1101, the Oath of the Lippoldsberg Nuns, has been proven genuine. In this document the 25 nuns vow to live according to the Benedictine rules of Hirsau. It is signed not only by archbishop Ruthard, the abbess and the nuns, but also by a number of other leading ecclesiastic and secular princes. This is particularly interesting because the whole lot is known to have been opposed to Heinrich IV. There are no other documents about the meeting, but it was surely about more than witnessing a few nuns taking a vow of chastity. 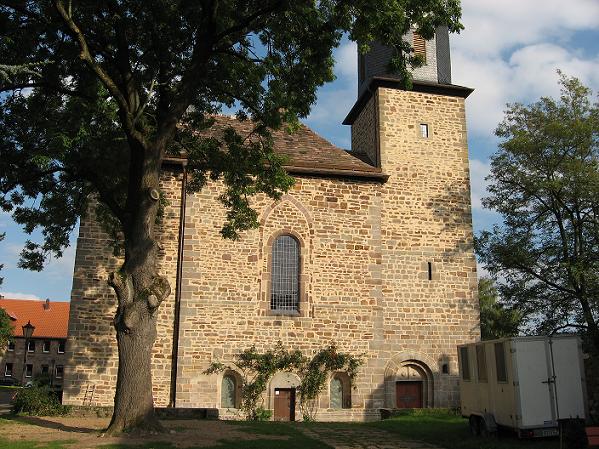 West side with tower
Considering the fact that Bursfelde Abbey is only a few miles away, and the strong connections of Heinrich of Northeim with that place, one may wonder if the Count of Northeim was present and if he really had turned to the side of Heinrich IV or played double like his dad did on occasion. I'd like to get a list of the people who signed that document. ;)

Whatever plot against the Emperor - of the many he faced - was cooked up there, the event brought Lippoldsberg Abbey into the spotlight for a moment. After that, the place sank into obscurity until 1138.

Sources: The guide booklet about the history of Lippoldsberg Abbey Church and the official website.

Comments:
As usual, beautiful pictures. What I really love about your site is you don't just throw the pictures up and say "here are some pictures of ..." - you provide so much information about the places in the pictures. In addition to looking at the wonderful pictures you take, I enjoy reading all of the interesting information.

Thank you, Daphne.
There are some many interesting stories in history, and I like to share some of them.

I'm trying to picture the poor sods who had to build all those churches. That's a lot of stone to lift and place...

Gorgeous stone buildings, and fascinating history - as usual!!
A Chapter house sounds rather like an all girls' finishing school, lol.

Constance, they had some sort of cranes and pulleys. But yes, it was still a lot of heavy work.

Hehe, Siegfried surely knew where to find his advantage. And he never got punished for that kidnapping plot earlier in his career, either.

Sam, there is a working Chapter house at Fischbeck abbey. The ladies living there are way past school girl age, but make for excellent guides throught the church. And boy, did the one we met know lots of gossip all the way down to the Middle Ages.

Lovely photos! I'm so glad I didn't live in those times. It must have been horrid being a female with no powers. I think I'd cause chaos if I time-travelled.

Oh, being the abbess of an important nunnery held a lot of power, and there were some female regents in Mediaeval Germany, and female artisans in towns were not unusual. But yes, the overall position of women was no fun.

You'd likely have run into trouble for writing naughty stories, though. :-)