11 May 2008
Fallen Splendour, Forgotten Greatness
St Mary's Abbey in York once was the one of the wealthiest monasteries in England and the abbot among the most powerful clergymen of his days. The abbey was built in 1088 and consecrated to the Benedictine rule, though of course, later changes and additions were made; most of what is left looks Gothic (Early English period) to me rather than Norman, except the heavy bundled pillar in the crossing that reminds me of the Norman part of Hexham Abbey. 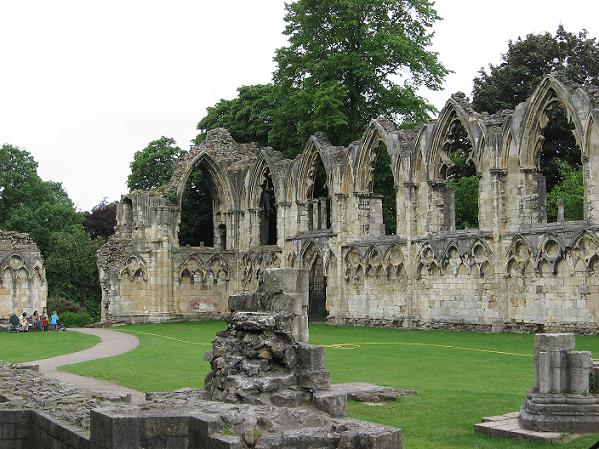 St.Mary's Abbey, remains of the nave

The Gothic parts would fit with the time the wall encircling the abbey was erected which dates to 1260. The walls proved useful several times when the abbey and the city of York quarreled about taxes and land ownership. Somehow these things always tended to come to blows in the Middle Ages. 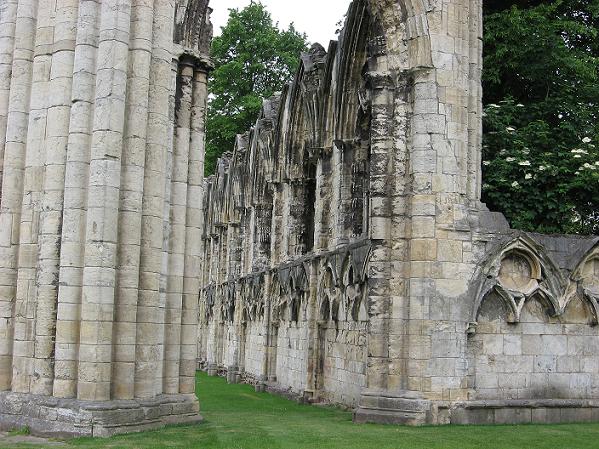 Crossing and transept, to the left a bundled pillar of surprising size
Today only some ruins in the Museum Gardens remain, but you can still sense some of the splendour in the withered stones. The estate of the monastery once occupied the entire area of the Museum Gardens. What is left are parts of the nave, the crossing and transept, and the cloister. 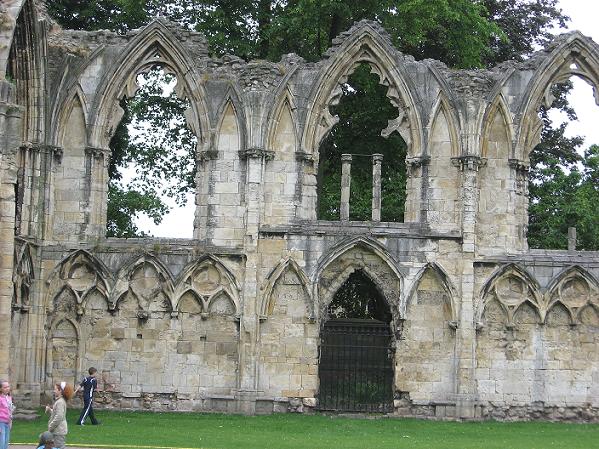 South entrance to the main nave
The decline of the abbey began when King Henry VIII banned all monasteries in England in 1530. The buildings were converted into a palace for the king when he visited York. Over time, the abbey with outbuildings and church fell into ruins until the Yorkshire Philosophical Society excavated them in the 1820ies and made efforts to preserve the remains.   ¶ May 11, 2008

Comments:
It looks better with grass and trees than it would enclosed... IMHO. But I'm weird that way. Outdoor worship, commune with nature and all.

Beautiful ruins. They do look quite gothic.

" the splendour in the withered stones"
Well and exactly put.

Lol Constance, since in Wyoming the only thing to use as backdrop for old stones would be tumbleweeds, I can understand you prefer trees. :)

Thanky you, Shelley and Bernita.

Superb, I must visit this some day.

Lovely pics, Gabriele! I'm hoping to visit York again sometime over the next few months - I haven't been there for a few years, and I have withdrawal symptoms. ;)