24 Jun 2008
Dungeons (No Dragons)
A typical Mediaeval castle needs a typical dungeon, dark, wet, full of rats, shackles dangling from the walls, and maybe even equipped with a rack. All the medieaval-based Fantasy novels have them, after all. *grin*

There are indeed dungeons in some Welsh castles, or rooms that could be used as such. Though noble prisoners kept for ransom were not held under such unfavourable conditions. But when captivity was intended as punishment, even a title may not have saved you from moldy straw and rats. 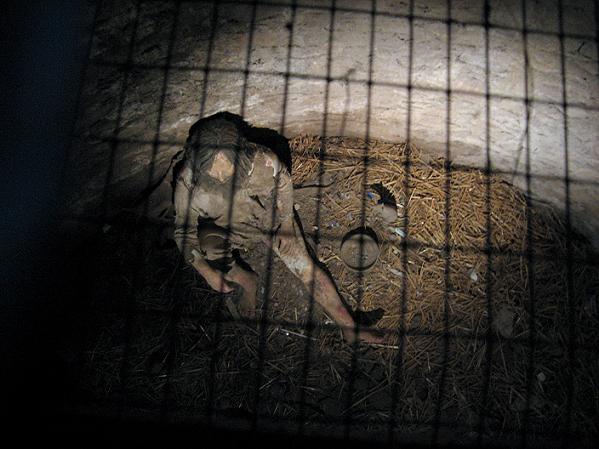 Pembroke Castle has a very fine example of a gaol built into a tower, with only one small slit in the eastern wall to let a glimpse of light in. The oubliette can only be reached through a trap door in the floor of the upper room, and it's the only angle to get a pic as well.

If you look closely, you can see a little rat. It's dinner time. :) 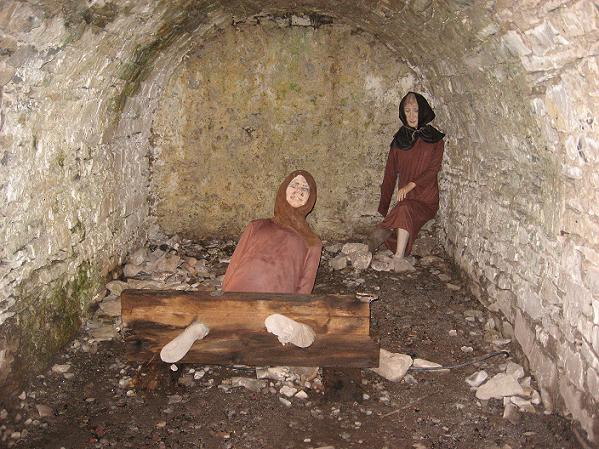 Somewhat larger but no more comfortable is the dungeon in Manorbier Castle. If you end up with your legs in the stocks and hands tied behind your back, you'll be in for all sort of aches and your back will not love you. Don't think it was so well lit; I had to use a flash or you'd not have seen anything.

German castles have dungeons, too, and some are catered to the tourists by suitable decorations as well. No wax figures this time, but a nice rack - albeit someone should do something about the un-scary dust layer - and some shackles. 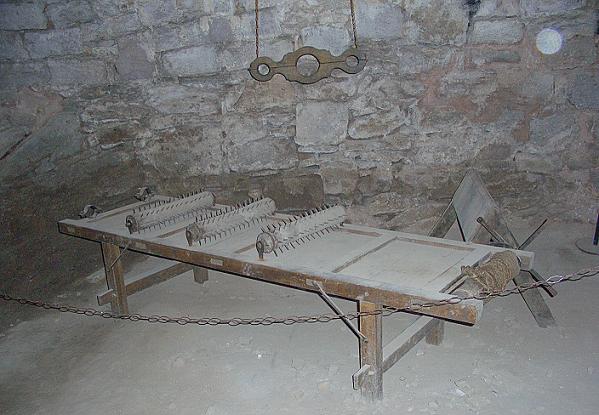 This fun display is in the Hanstein Castle, mentioned several times on my blog. Though we don't know if there was indeed not only a dungeon but a torture chamber as well. The sources don't mention one, as far as I know. Not that one needs a lot of sophisticated equipment to torture a prisoner.

Comments:
Humans. We're SO good at being nasty to each other. I did tour some torture museum when I was in Germany many many years ago. I think it was in Rothenburg. It was fascinating in a sick and perverted way. :)

That last picture is terrifying! Eegads!

That oubliette in Pembroke looks truly horrible. Reminds me of the story about Maude de Braose and her son being starved to death by King John - that wasn't at Pembroke, was it?

They probably did the torturing in a more convenient location.

Carla:I think Maude and her son were starved to death at Corfe.

Gabriele: Is it me or do the feet in the stocks the middle picture look in a rather impossible position!!! Maybe the poor soul had been tortured first!

Warwick castle's got quite a well-equipped dungeon too but I think it's been done for the tourists. The dungeon with the worst atmosphere that I've ever walked into, though, is at Goodrich castle though. Even my daughter won't go in there even though it's an empty room.

Meghan, the dust spoils the effect a bit. Blood stains would have been more appropriate. :)

Carla, not Maud, but I think there was one noble prisoner kept in the Pembroke oubliette, but I can't find the name.

Bernita, obviously Mediaeval people were less picky about surroundings, most torture chambers are in the gaol towers.

Lady D, true, the feet look sorta off. The Spanish boot, maybe? *evil grin* His face does look contorted with pain, after all.

That rack looks horrid. I didn't think much of the rat in the first one either. ;) I think I would have been on my best behavior!

Lol, your best behaviour didn't always help when the queen took a lover and tried to eliminate the king and all those who worked for him. Ask Hugh Despenser.

Sure looks like a nice spot for a picknick... Eugh!

I always thought that oubliette was a much better term than dungeon for those places.


But should one of your characters gets to reside in one, I'm sure the plot bunnies will remember. Fiction has some advantages.

I paid my 5 Euros to see the Amnesty International touring exhibit at the Inquisitor's Palace in Valetta. (Thats in Malta) The impliments were not nearly so scary as the original books they had there, open to various illustrated pages, detailing in perfect detail exactly how many turns of a thumbscrew and for how long, and how it was to be applied, and for what. It seemed to be an attempt to "dignify by codification".
Torture for women seemed to take an inordinate amount (80% or so) of careful thought and space in the books.
I wonder if the modern CIA has a manual on waterboarding, how long it can be used, and for what purposes, and if 200 years from now, the latest incarnation of Amnesty International will have those manuals on display as well!

Agh, the thought of all those dark dungeons gives me the shudders!

There seems to be some dispute about where Maud de Braose and her son were starved to death - either Corfe or Windsor.

Celede, I would mind the cobwebs more than the rack. :)

Hank, it depends on how mean I want to be to my characters. I could pull a GRR Martin on them. Mwuahaha

Such charming little places. The dark, enclosed spaces alone would be more than enough for me. (shudders)

Mind you, a bit of character torture never hurt anyone. ;)

As long as they don't visit you in the night, demanding more screen time and less torture. :)

Ah - the oubliette!
How awful. I can just imagine (and shudder) about being in a dungeon.
Just goes to show how barbaric man is.

Many people have the idea that a medieval dungeon was placed somewhere in the depths of the castle, well below ground, when in reality, a tower often served as a location to hold prisoners. And you're right about the conditions: they were not so unfavorable to noble prisoners being held for ransom; after all, it doesn't do you any good if you're prisoner dies while under your watch.

Steven,
it depends a bit on the structure of the castle. Most Norman ones had their dungeon in a tower, but in case of the Hanstein, it was hewn into the bedrock. It probably depends on the space avaliable, and the hilltop castles in Germany have less of it.

The photos of the dungeons and torture instruments is a reminder of the human's ability to render another into submission, or as a pervse declaration of "look what will happen to you if..."

Otherwise very interesting history recollections. You've provided me with all sorts of creative thoughts for my new writing projects.

It's probably a bad sign that also the dungeons provide me with some mean ideas what to do to my characters. ;)

Well these give me the shivers, especially the oubliette. Such a lovely word for such a terrible, nightmarish place! d:

French words do that.

Faire l'amour sounds prettier than 'having sex', too. :)

Gabriele, thanks for clarifying. I haven't studied German castle construction nearly as much as English and French castle architecture. Most sources I've read about the way English and French castles were constructed point to towers being used as dungeons. Of course, I haven't had the wonderful opportunity like you've had to actually visit them. It makes sense, though, that some castles would have to use what space is available.

Steven, it would not have made a difference to the prisoner either way. ;) The escape attempts and rare successful esacapes always happened through the door, either by bribing the guards, fighting or whatever other idea someone would come up with. Breaking through walls (which would not have been possible in a bedrock dungeon) only happened in Chateau d'If, as far as I remember. *wink*