22 Jun 2008
Lost Kingdoms and Sunken Realms
I found some Welsh legends of sunken kingdoms. Considering the fact the country has a long stretch of coast with heavy tides, it should not come as suprise that such legends arose as result of floods. Moreover, the Welsh share a Celtic culture with the Bretons where such a legend is famous as well, that of Kêr Ys (Kêr/Caer, meaning fortress or stronghold).

Cantre'r Gwaelod is a legendary kingdom said to have occupied a tract of fertile land northwest of Aberystwyth, todays Cardigan Bay. Its capital was Caer Wyddno, seat of the ruler Gwyddno Garanhir, who in some legends is connected with Taliesin as grandfather or foster father.
Like Kêr Ys, the kingdom was protected from the sea by floodgates. One day the keeper of the sluice gates was drunk and failed to close them, with the result that the sea flooded the land. Some versions name the keeper as Seithenyn, and there is a story about him having been distracted by a woman, Mererid, who kept the keys to the sluices. Or maybe it was a fae responsible for the mess.
Gwyddno also held a landlocked portion of his kingdom to which he was able to flee, like King Gradlon of Kêr Ys. He was later called King of Ceredigion. The church bells of Cantre'r Gwaelod are said to ring out in times of danger, a legend shared with Vineta, a sunken city in the Baltic Sea. 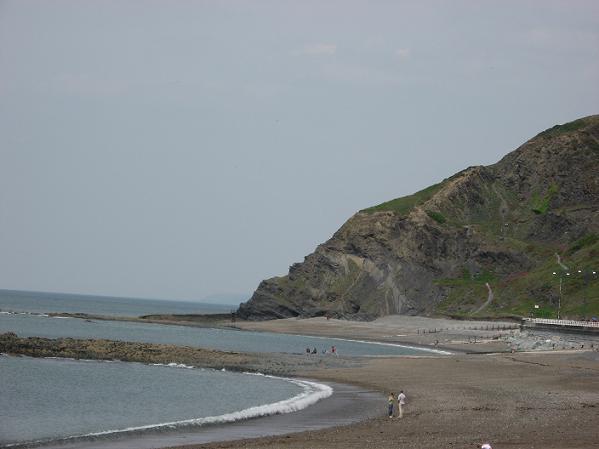 The coast of Aberystwyth

Llys Helig was the palace of Prince Helig ap Glannawg who is said to have lived in the 6th century, and whose sons are connected with the establishment of several churches in the area. Helig owned an area of land between Llandudno and Conwy which was later inundated by the sea. Like Vineta's shadows in clear water, it is said that the remains of Llys Helig can be seen at low tides,
Some versions of the legend tell that the flood was the result of revenge because Helig's daughter Gwendud was unfaithful in love. In another version her lover Tathal treacherously murdered a Scottish chieftain to gain a gold torque and her hand, and the victim swore vengeance.  ¶ June 22, 2008

Comments:
One of the best series of children's books ever written is The Dark is Rising by Susan Cooper (one book of which was made into an appalling film). A large part of that story focuses on Cantre'r Gwaelod, Taliesin and the Welsh arthurian connection. Well worth a read!

(you can find them here on Amazon)

Or event here on Amazon. Sorry, my cut and paste failed.

I can hear the surf in that photo, Gabriele, and the sea birds crying.

Thanks Ian, I'll check if I can find it on Amazon.de for little money. I'm wary about children's books, since I never read them even as child. :)

Thank you, Bernita. The photos bring back memories.

There's also a lost kingdom legend about Bala Lake (Llyn Tegid). Would be interesting to look up the geology of the Welsh coast and see if there's any evidence of a sudden change in sea level or catastrophic storms. I have a vague idea that Ireland was connected by a land bridge shortly after the last Ice Age, but I haven't got a reference so I don't know if it's true. If it is, you can see how inundation stories could easily arise.
I haven't read The Dark is Rising, having also missed it as a child, but so many people have recommended it that I'm trying to get a copy.

There was a general rise in sea levels at the end of the ice age, and the myths are all over the place, from the flood in the Bible and the Gilgamesh epos to Tartessos at the Spanish coast up to Wales. Old memories combined with the experience of heavy tides could have worked to create such myths. An even the non-tidal Baltic sea that harbours Vineta has claimed land on occasion.

The interesting thing is that so many of the myths came to life in the Middle Ages and usually date back only a few centuries (some mythic king living at the time of the Romans, etc). I wonder if there were some particularly severe weather incidents that stretched from Spain to Poland at some point.

I've always been fascinated by tales of sunken kingdoms. You've just given me a couple more to investigate. d:)) (Oh, love the photo! You just know in moonlight in the deep well of the night gleaming towers rise from the surf.)

"And all the coasts and seaward regions of the western world suffered great change and ruin in that time; for the seas invaded the lands, and shores foundered, and ancient isles were drowned, and new isles were uplifted; and hills crumbled and rivers were turned into strange courses."

Had to root around for my copy of The Silmarillion to find that quote, but it was worth it. :) I wonder if Tolkien got some inspiration from those Welsh legends, too...

Dayya, those tales are fascinating. And while archaeological underwater research failed to locate any human-made structures (though some created by nature have been mistaken for such in the past centuries) and prove the existence of sunken palaces and cities, a writer can make them real. :)

Kirsten, I won't be surprised. After all, Tolkien filched a lot of Welsh for his languages, why not the legends as well? ;)

Interesting legends. It would be interesting to learn about the weather patterns and big storms of the time. I'm pretty sure Ireland was connected by a land bridge at one time.

Atlantis. Yuck. Hackneyed and over used pointless backstory. Might be useful for the inhabitants of Thera, but otherwise....why? So many great real historical plot bunnies why bother inventing fake places?

Though I rather like the idea of a causeway to Ireland. Hey maybe they could call it the "Giant's Causeway"?

It'll only be hackneyed if it's done badly. :)

Isn't there a kindom which rises out of Lake Constance on Midsummer's Eve?