1 Jun 2008
The Pleasantest Spot in Wales
Thus described Gerald of Wales (1146-1223) his birthplace Manorbier Castle at the coast of south Wales. I won't give it this title alone of all places I've seen, but it is surely among the prettiest sites. And since I caught a sunny day for my visit, Manorbier showed itself to advantage. 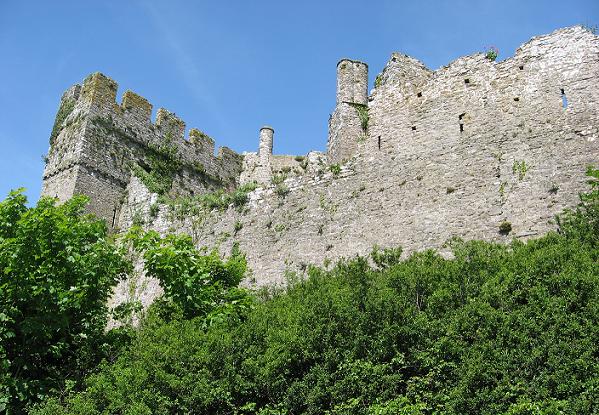 12th century Giraldus Cambrensis must have been quite a character, churchman, writer, traveler, diplomat, and a spy and outlaw at a time. But we can thank him for a fine description of Medieaval Wales. His grandfather, a Norman lord of the de Barri family, was granted the lands of Manorbier some time after 1003 and built a timber castle that was expanded in stone by his son William, Gerald's father. The castle remained in possession of the family until 1359 when it fell back to the crown.

William married a daughter of the famous Nest of Deheubarth daughter of Prince Rhys ap Tewdwr, which made Gerald a descendant of two noble houses, Norman and Welsh. Manorbier Castle, inner ward
Manorbier, though well fortified, presents a less grand impression than fe. Pembroke or Caernarfon. It reminded me more of the German castles around my hometown albeit it keeps its specific Norman features that distinguish it from our hill castles. It is more the size and the fact it has become some sort of park. The other Norman castles only have lawns in the wards but no trees and flowers which of course, adds to the enormous scale of the places, while the German castles display trees in the yards and bushes in the bailey. You may remember the foliage on my photos from the Hanstein and Plesse. The inner ward of Manorbier tops them with its abundance of flowers and greens growing in beds along the walls. 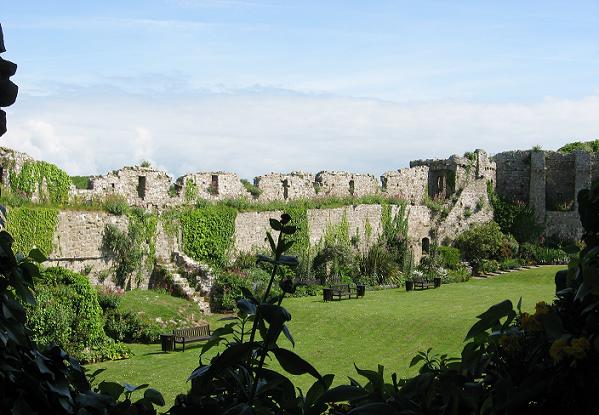 Manorbier Castle, inner ward
Another feature Manorbier has in common with 'my' castles is the hall-keep that is built directly into the inner curtain wall, like this example (second photo) from the Hanstein shows, instead of a freestanding structure typical for Norman castles. In the 1260ies a chapel was added to the inner buildings which is preserved until today, as well as the vaulted basement under the entire hall block.

In former times, Manorbier was closer to the sea that still can be seen from the windows, and had a sea gate. But the changes in geography have added a fine beach today. 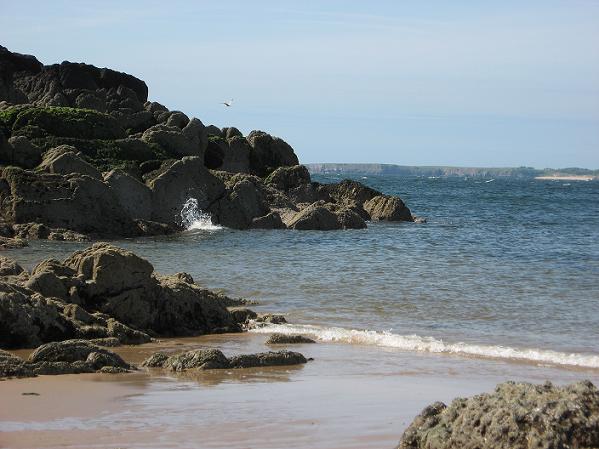 Beach near Manorbier Castle
I spent some time down there, walked through the breakers playing on the sand and enveloping the rocks with foam, sat in the warm sand and felt like during my childhood holidays at the Baltic Sea. Including the sand I kept finding in my clothes the rest of the day. Memories indeed, lol. I could not resist to bring some pretty stones and mussles, either.

Comments:
awesome pictures. Thanks so much for sharing these. I could really get into hanging around Manorbier Castle. It's a different world with the grass. Looks like a nice spot to take your paints for a day, too.

Constance, you can rent a self catering appartment and have the castle to yourself after the tourists are out for the day.

My God, that's gorgeous. There's something so evocative about overgrown ruins like that...

Beautiful pictures. I need to go back, there are so many things I didn't get to see the first time. :)

~yearn, yearn~
One could linger there forever.

Kirsten, I like me my ruins with ivy as well. :) Though I admit places like Pembroke and Caernarfon would look wrong if they attempted to be pretty instead of grand.

Ann, you never manage to see everything. I could go back to Wales tomorrow for another two weeks and not lack in places to see.

Bernita, I spent more time there than I planned. ;)

It does look like an attractive place. I could imagine writing outside in the inner ward - after the tourists of course. ;)

That does indeed look like a beautiful place to visit *makes notes*.

Although I like the way that nature combines with the ruins, I am quite surprised it hasn't been removed in the name of conservation. So... bad for the castle conservers but very, very good for photographers and romantics!

Shelley, I bet it would prove an inspiring place. I'm tempted to go back and rent that appartment for a few days. :)

Lady D, maybe they cut the green stuff back when it threatens to grow into the walls. Conservators hereabout don't seem too concerned about ivy and vines, after all.

Thanks for the wonderful photos Gabrielle - they brought back many good memories. I intend revisiting Pembrokshire before too long. I am so glad you have been enjoying your visit to Wales.
And yes, according to the Akashic Records (smile) you can safely assume that William Marshal did enjoy a few gentler moments at Pembroke - although more especially at Striguil (Chepstow).

Thanks for stopping by, Elizabeth. Yes, I had a good time.

Hehe, I'm not surprised William had a romantic streak; it fits him. :)

Too lazy to hunt for the quote now, but I remember reading that Gerald and his brothers used to play on the beach at Manorbier when they were children - the older brothers built sandcastles, and Gerald built sand-cathedrals!