1 Sept 2008
A Curious Cellar
All that travelling around not only gives me plotbunnies, I also have tons of old material I haven't posted yet, and there's always new stuff adding up. So today we'll go back to that Roman villa rustica in Wachenheim I presented last summer.

One of the most interesting features of the Wachenheim villa is the cellar which has been preserved in its original height - probably got filled with rubbish and mud and was missed by the stone filching farmers. With a size of 11.90 x 3.90 metres (46.50 square for those who, like me, suck at maths) it is one of the largest in the Roman settled lands along the Rhine. 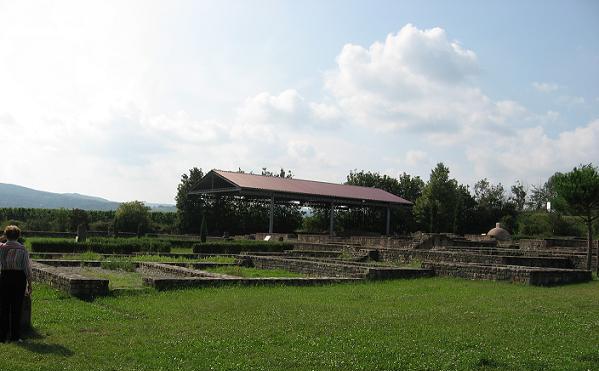 View towards the remains of the villa, the roofed area is the cellar

Light came in from six air shafts on the west wall, albeit not very much. The walls had been whitewashed and were decorated with red painted, artificial joints. The Romans liked even their cellars pretty. The three niches in the north wall also date from this first period.

It has been assumed those may have been places for the images of Mithras and his helpers, and the cellar was used as mithraeum, but the usual stone benches on the sides are missing. On the other side, if the cellar was only used as storage room, why build three niches, one large and two smaller ones, that don't look very useful for putting things in other than statues or such. Wooden shelves would have been of more use. 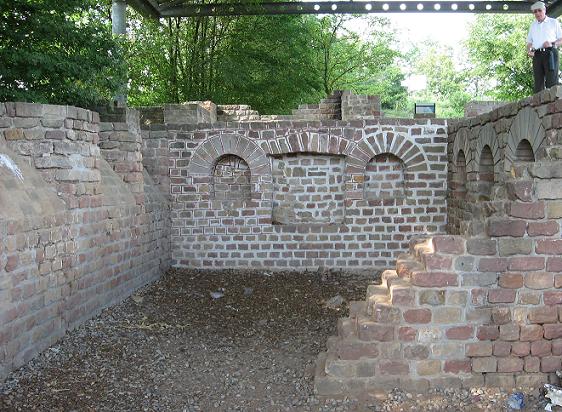 View towards the north wall niches (the air shafts can be seen on the left)
In the 3rd century, the cellar was rebuilt. The eastern wall which today has seven niches as mysterious as the three on the north side was remade, and the cellar was divided into two compartments by a wall.

While the southern room could still be accessed by the stone stairs hiding behind the bush on the photo below, the 'inner' room would have been entered by a wooden staircase from inside the villa. Maybe it was then the room was used as mithraeum; the benches could well have been made of wood and not stone. I've not found out by which arguments the three niches in the north wall are ascribed the first building period, while the east wall ones belong to the second. 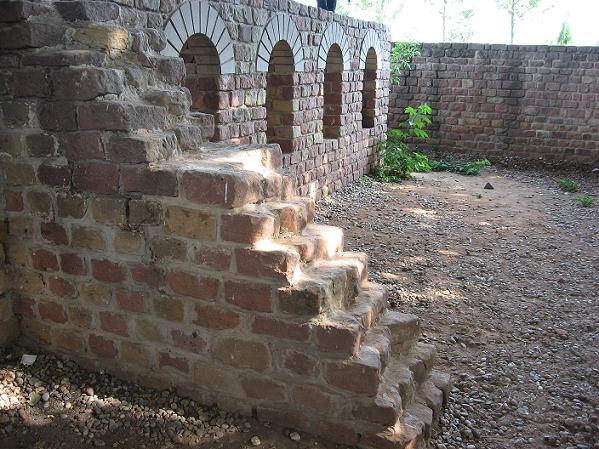 View towards the south, on the right side the niches, in the foreground the dividing wall
In the 4th century, the inner room was filled up and covered with a platform for a furnace room (praefurnium), that way the warm bath (tepidarium) changed into a hot bath (caldarium). The new bath was in use until the villa was abandoned in the 6th century.

I wonder if, in case the inner room has indeed been used as mithraeum, this change in architecture came about by a change in the religion of the owners who may have become Christians and wanted to cover up the pagan place.   ¶ September 01, 2008

The niches could perhaps have (originally?) been for lamps? Just a thought...

From the look of it, the cellar does seem to have served some sort of special purpose - unless the owners were just obsessive interior designers ;-)

It is intriguing, Bernita.

Jonathan, it's an idea, but the niches in the east wall are pretty large for that - look at my father standing on top of the wall for comparison - and why would the ones in the north wall be a different size (and rather large as well). It'll remain a mystery, I suppose.

Lady D, well, that cellar surely is a lot prettier than mine. :)

That is a treasure room. The niches are repositories for pay documents and records for the garrison which occupied this spot.

The airshafts needed to be there because people worked down there, and there needed to be a place to let the smoke from the lamps out. I bet they are too small to let even a small child down into them on a rope!

It can't be a granary since those are always up high, with air space under them....those spaces helped keep the grain dry, and provided and a place to keep pet cats. Libraries and cultural artifacts would also be stored up above, not buried down in a cellar.

Though admittedly, its bigger than the treasure room at Corstopitum.

Considering the fact this is a villa, not a fort, I think a treasure room is very unlikely. And even the one at Chester which was a major legionary fort, is smaller. Also, the anteroom with the Imperial and legionary insignia is missing.

Oh that is so cool! I bet it was changed to accomidate the new religion. Maybe Mithra became unpopular. I can just hear the wife saying, 'You know, Clovis, we really have to do something about the basement. I mean, what if someone drops by and sees it? Let's tear out the old altar, we never use it anymore. The Roman neighbors turned Their mithraeum into a wine cellar!'
LOL

Wine-cellar AND mithraeum. That's what I'd do. ;)

Kirsten, maybe the one who built th separating wall did exactly that - wine cellar on the outside, mithraeum hidden behind an secret door. ;)

Intriguing. The niches do look as if they were intended to display something. Could it have been something other than Mithras and his helpers - other gods, or the household spirits, or something like that? That would account for the absence of stone benches. The decorative plaster and the skylights suggest it was more than a handy place to keep the coal :-), at least during part of its life. Are there similar cellars at other villas?

Carla, household gods are an option though there were usually displayed in the house, not the cellar, and in the 1st century AD they would not have been a secret. But maybe later when Christian religion gained influence, those would have been worshipped less openly.

Other cellars in the area are smaller and not decorated; at least the ones that have been found. :)