7 Sept 2008
Villa en suite
I've mentioned that the Wachenheim villa has two sets of baths, assumedly one for the family located inside the main villa, and another for the slaves and farmworkers in the outbuildings. The family bath encompassed 59 square metres, that's pretty much a two room flat today. Talk about luxury. The room behind the cellar you can see on the photo was the warm bath (changed to a hot bath in the 4th century). The original hot bath is to the right where part of the hypocaust heating has been laid open. There had been a whole system of heating tunnels and water and sewage pipes. 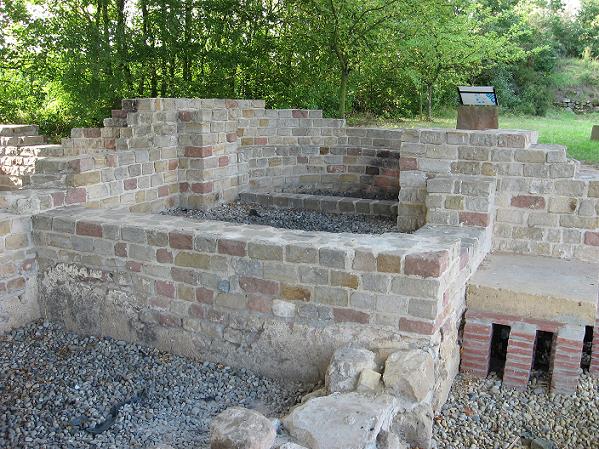 Directly outside the main building is a latrine with water flushing. Since our dear Romans were practical people, they used the used water from the second baths for toilet flushing by building the seats over the drainage pipe which was guided through an open channel under the toilets. The sewage was probably led into a brook near the villa, while the freshwater was taken from a different source. There has been a well far enough from the brook to have offered clean water. We know from Vindobona (Vienna) that a good part of it ran under the ground, especially in parts where frost may have damaged the aquaeducts (and while the Rhineland is warmer than where I live, frost in winter is not impossible). Such systems would not leave many traces today after ploughing the fields for centuries. 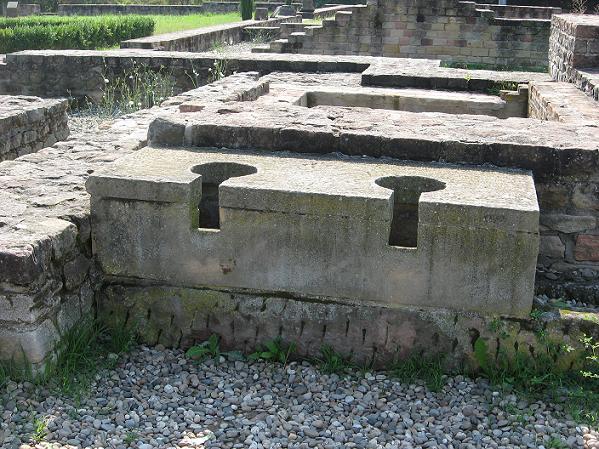 Partly reconstructed toilets, in the background part of the second baths
The toilet seats are a reconstruction. Visiting the loo was not the private matter it is today, not only in the military forts but in private households as well. Latrines often had decorated walls, but not enough traces remain of the Wachenheim villa to learn anything about frescoes and mosaics in those buildings. Public toilets also fell victim to a phenomenon today called graffiti which is not as modern as we think, but I doubt the owner of the villa would have allowed dirty jokes on the latrine walls.   ¶ September 07, 2008

Comments:
An elegant outhouse.
Stone would have been a bit frosty on the behind in winter though, so I wonder if there was a wooden overlay.

I suppose so, Bernita.

This post reminded me of the time in 1970 when I was touring Germany, I had a rude shock during the use of a county hotel bathroom that had no lock on the door. A strange man came in while I was beginning to sit. I chased him out while he protested in German. Thank goodness my understanding of the language is at a minimum or I might have given him an earful...well, actually I did, in English. Later, the desk clerk explained that it was a common practice to have a communal washroom. From then on my mother stood outside the washroom door while touring Germany and Austria.

Well, we have locks on the doors these days, and men and women always had separate rooms even in 1970ies. That man must have been a perv spying on the girls.