13 Oct 2008
The Local Nobility and Their Castles - Hardenberg Castle
I've been castle hunting again. This time I got the remains of Hardenberg Castle. It's some 15 minutes drive from where I live, but since the ruins are dangerous, you can only visit the castle on a guided tour. It was a pretty, warm Indian summer afternoon today, and I felt like visiting a castle and take a few pics. Here are some. 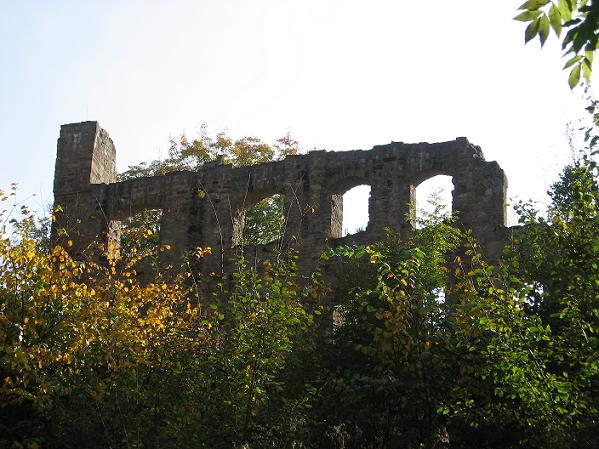 Hardenberg Castle, remains of the Vorderhaus

The land where the Hardenberg lies is old Saxon territory that was conquered by Charlemagne. It seems that soon thereafter a fortified building was erected on the sandstone promontory that overlooks the south-north route towards the Harz and one of the west-east going trade ways. The place is first mentioned by the name of Hardenberg in a charte of 1101, as belonging to the archbishop of Mainz. The castle - more a fortified house then - was held by ministeriales, administrators of a noble birth, a feudal class particular to Germany. 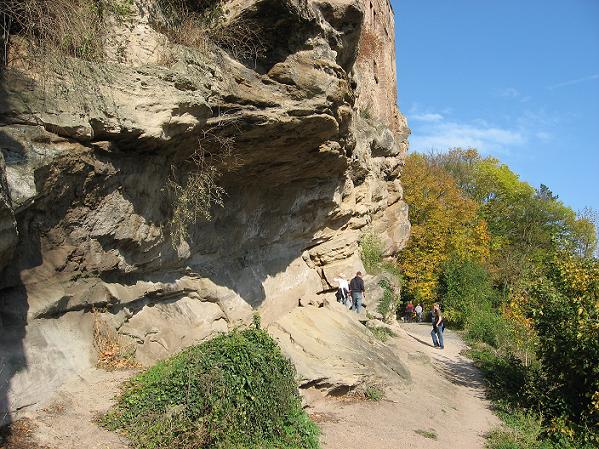 The sandstone rock promontory on which the castle stands
The lands of the archbishop of Mainz bordered to those of the Saxon dukes of Braunschweig, thus there had been a number of border skirmishes and the Hardenberg was besieged several times, but never taken. But nevertheless, the evacuations of the village people in the surroundings and the upkeep of the castle cost a lot of money, and the archbishop of Mainz got indebted to the counts of Hardenberg. In 1357 he thus granted them castle and lands as allodial possessions. 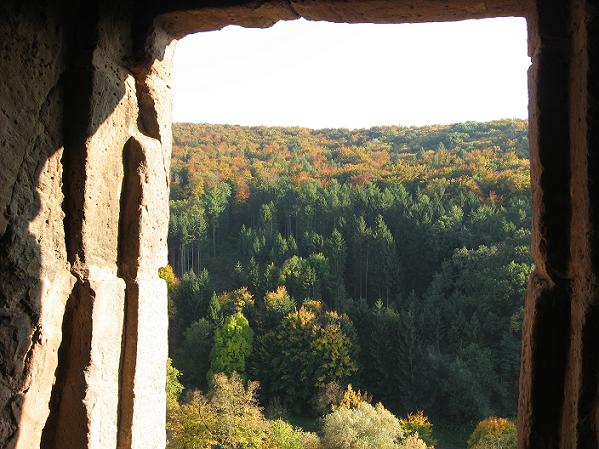 View from one of the windows
The castle was expanded over time, and at some point developed an interesting structure. Since there were two heirs in the 14th century, they divided the area where the castle stands and the surrounding lands belonging to them, and a second main hall and some outhouses were built. They came to be known as Hinterhaus (back house, the older buildings) and Vorderhaus (front house), and the two familes as 'back house' and 'front house' line. 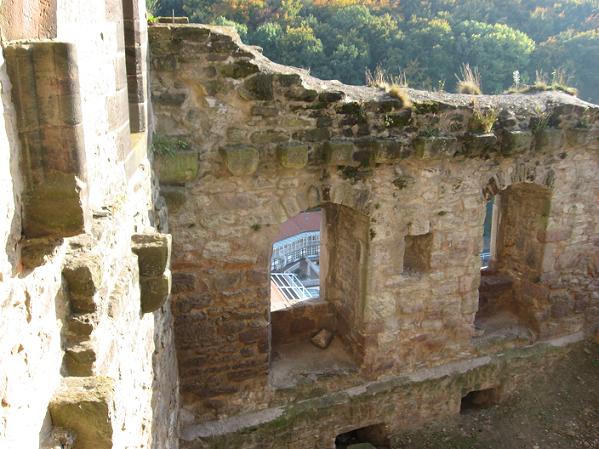 Back house main hall, seen from the tower
There are some legends about family quarrels and fights, but those are not true; on the castle ground peace was kept (the so called Burgfrieden), and the families shared the well and the gate house.

But the structure makes for an odd mix of building styles from the 12th to the 17th century. In the end it was impossible to find the first house in the tangle, the one that theoretically belonged to the archbishop of Mainz. It became an issue when the Hardenberg Counts adopted the Protestant faith, a fact the archbishop didn't like one bit. He wanted his part of the castle back by legal means, but lost the process. 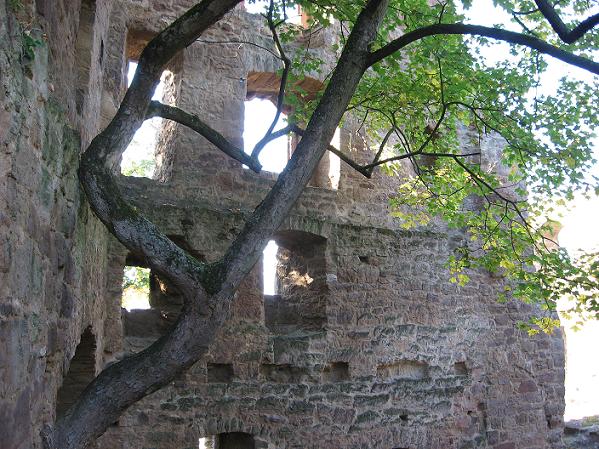 Front house main hall
At the end of the 17th century, the front house suffered severe damage during a lightning storm, and the family moved to Göttingen until a new Renaissance palace was built nearby. The family moved to that place in 1710 and their descendants still live there.

The line holding the back house died out without male issue, so the castle was abandoned and fell into ruins until some preservation took place in the 19th century. It's a picturesque place today, but dangerous to climb around. When I stepped onto the remains of a wall to get a better shot, the guide warned me to be careful or I'd end up in the trench. 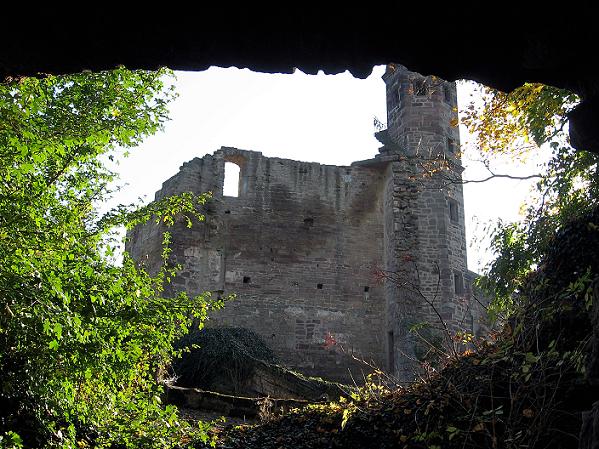 View from a front house cellar to the back house
Both castle and Renaissance palace, as well as the buildings at the foot of the hill and most of the land is still in possession of the Counts of Hardenberg. They've opened the park to the public, built a destillery and a luxury hotel plus restaurant in the estate houses, a golf place on some of their land, and host riding tournaments and other events.

The Hardenberg liquors are very good, too, and you can buy them in the distillery. *grin*  ¶ October 13, 2008

All of these castles have such wonderful views! It would be lovely to wake up to that every morning!

You do realize I'm extremely jealous, don't you? *g*

Lady D, you'd not only wake up to a great view but also to cold wind, and on bad days, rain puddles on the floorboards. :)

What, and give up all this nothing???

I'm picking my jaw up over here in California. I thought it was an American term and I never thought I would see it written by someone from Europe.

Linda, I use the term because the German one, Altweibersommer (Old Women's summer; because of the spider threads in the air) doesn't work for American readers. :)

And yes, many Germans know the term Indian Summer and use it when they refer to that time in the US or Canada.

Spectacular view over the woods from the window, with the leaves just starting to turn.

That's a neat solution to the inheritance problem :-) Did they do the same with the land?

Yes, they did. Took care both families got an equal share of good and not so good land as well.

Wow! I wish I lived near something that interesting! Amazing as usual.

Thank you, Meghan and Hank.