8 Oct 2008
Some Medicine Fun For Writers
One of the members of Forward Motion, a writer's site I frequent, is a IR nurse and knows a lot about medicine. I've discussed third degree burns with her (Thorgil can thank her if he survives and it's realistic), and torture (Roderic will probably not thank her, lol) in the FM chat. Since I'm not the only one to pester her about all things medical, she started a blog where you can learn about the symptoms of the plague, how to have a character die of tetanus, breastfeeding and lots of other interesting stuff. It's called Muse Medicine, and Arizela will add more articles to it. Be warned, though, it has pictures, and some are not pretty.

It reminded me that I have some fun things to share in my photo archive as well. 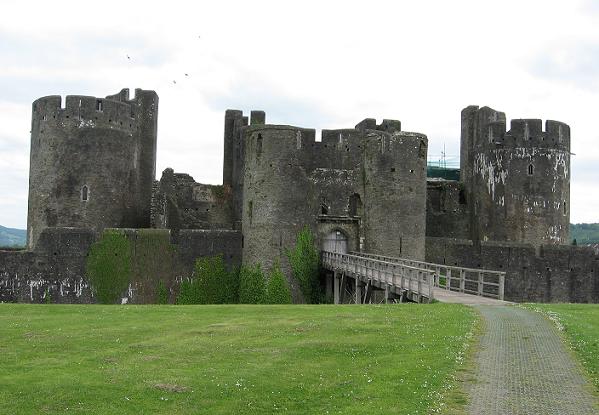 Another view of Caerphilly Castle

As I already mentioned, the day I visited Caerphilly Castle there were fencing demonstrations, archers and musketeers in the yard, but entertainment was also going on in the great hall. The time was Civil War, not really Medieaval, but it was very interesting. Too bad I forgot to grab a flyer of the reenactment group. 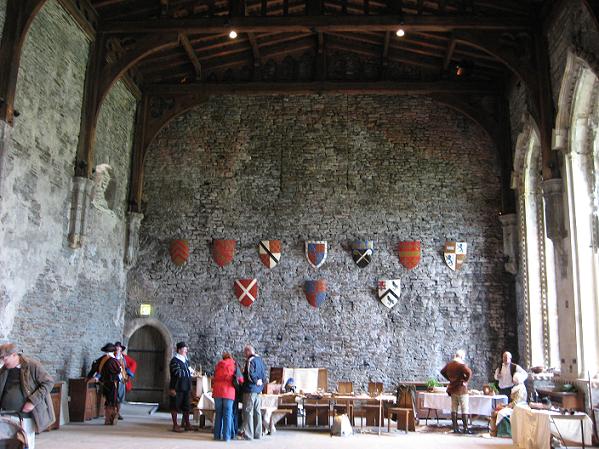 The Great Hall, interior
One lady made butter (tasted yummy), another showed how to card and spin wool, a third made soaps and scented lotions, to name some examples. One of the guys was a surgeon, and he brought some tools of his trade. Ouwie. 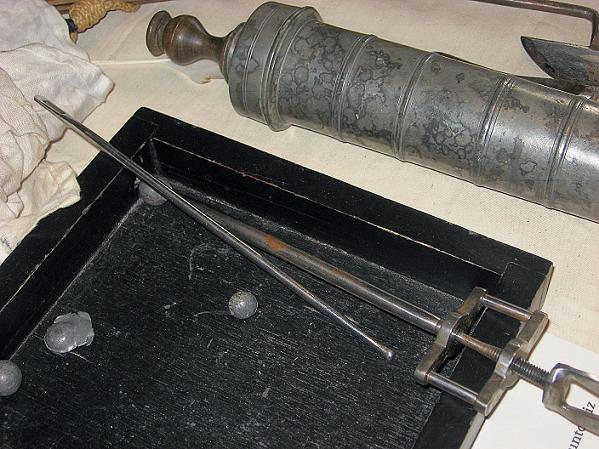 The omnipresent enema syringe, and bullet removal tongs
In the foreground are tongs for removing bullets from a wound. The surgeon would first poke around with the lancet and when he found the bullet, he'd insert the tong which worked a bit like a reverse screw driver. The bullet was caught and drawn into the metal stick and dragged out that way. No aneasthesia in sight except for filling the victim up with wine or stronger spirits. Mwuhaha. Chance that the wound channel would get infected was pretty strong. 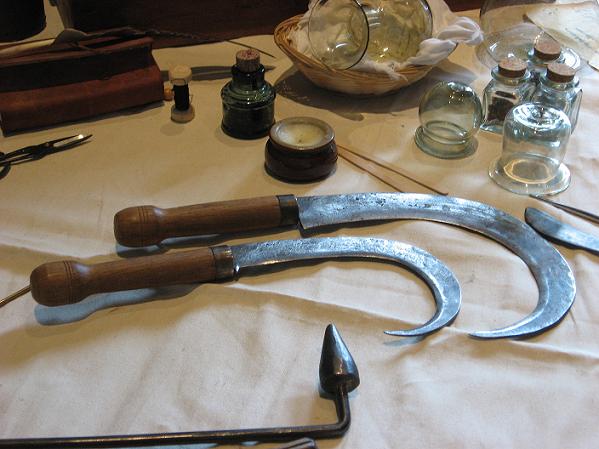 Amputation knives
Amputations were common since often severe infection or gangrena would set it, and in case a limb was afflicted, cutting it off was a chance to save the patient's life. For some reason, the survival rate of an amputation was a bit higher. The knives were used to cut through skin and muscle down to the bone. 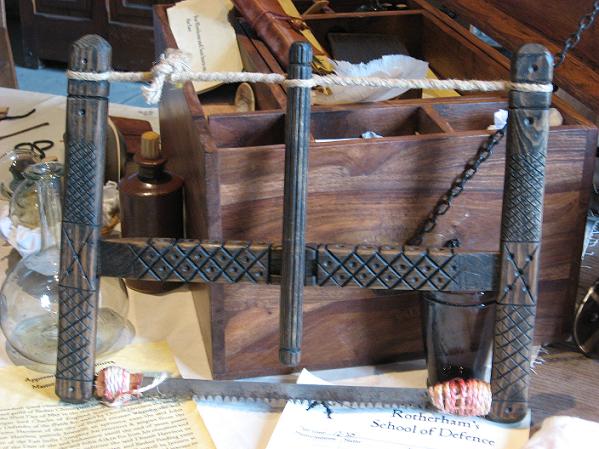 Bone saw
The really nasty part. Sawing through a bone hurts worse than hell, as anyone who'd had a broken bone can attest (I can't *knocks on wood* and I don't want to try; my love for research has its limits, lol).

So I rewrote the end of the innibränna scene to give the treatment of Thorgil more realism, and all scenes with Roderic after the torture in the dungeon of the Avodrite have been rewritten, taking into account he's left with several stiff fingers from the thumb screws and problems with his left shoulder due to the strappado. Which makes for a lot of fun if he tries to use a sword. Evil, me? Nooo.   ¶ October 08, 2008

That bone saw looks pretty mean. Oh, it's so going to suck for Aelius when he comes to have his foot taken off. Ouch...

I started shuddering when I saw the knives but the bone saw really made me go, "ew!"
I really enjoy the displays they have for making things. It helps keep the old arts alive. We used to make butter when we were kids. We had a hand butterchurn. I remember having a sore arm before the cream turned to butter!
Thanks for the link.

Wonderful pictures :)
I love medieval castles and I hope someday to visit more of them. For now my travels were limited in this particular field.
I hope to see more of them ;)

Hey, that's my castle! At least..my dad used to play in there when he was a kid and I have often visited it. My dad lived just up the hill from the castle on Windsor St. I still have cousins living nearby.

Shelley, the old stuff is interesting, isn't it? Very usuful for a writer of historical fiction, too.

Hi Dark Wolf,
thanks for visiting my blog and your kind word. I'm glad I can help my readers travel back into the past a bit. :)

Wynn,
no wonder you became a writer of historical fiction, with such a family background.

Love the pictures of Caerphilly! Hopefully I should be able to go and see the place for myself before Xmas! I can see a Despenser shield on the wall too :-)

And thanks for the blog link - it sounds really interesting. I have a rather morbid interest in illnesses etc - although not in actually having them, I hasten to add!

That shield's been put there especially for you. :)

Ari's blog is great. She can't post that much because she's very busy working as nurse, but there will be articles about PTSD and field amputation soon, and I'm sure she has more goodies in store. ;)

Those instruments look tortuous, though not as bad as those found in dungeons.

Thanks for posting these to provide further insight into writing about the past.