4 Dec 2008
Aberystwyth Impressions
Aberystwyth was a flyby visit on my way from Pembroke to Caernarfon, though should I ever come to Wales again, I'd like to spend more time there than two hours. It's a lively place because of the many students, but less hectic than Bangor with its connection to the train line to Manchester. James from the Sir Benfro blog (that's not a title, but Welsh for shire, btw.) gave me a qick tour to the promenade and the castle remains. 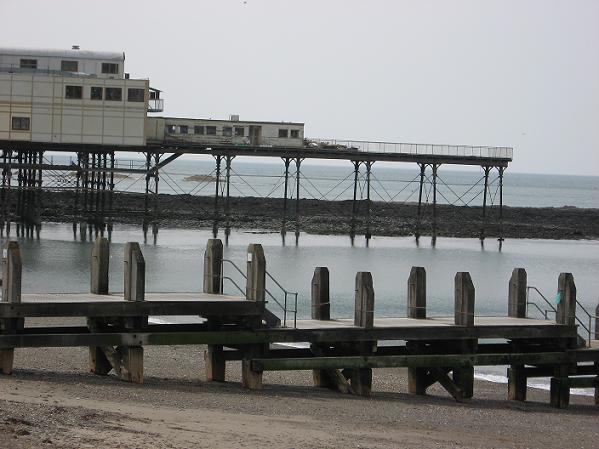 View to the Pier at low tide

The pier had once been 900 feet long, but only about 300 remain today after the sea reclaimed parts of it. The sea tends to do that; Ceredigion Bay is also the location of the legendary Cantre'r Gwaelod, one of the sunken cities that line the coasts - its legends are related to Kêr Ys in Brittany.

The history of Aberystwyth goes back to the 4th century BC when Iron Age settlers fortified the hilltop called Pen Dinas. The remains of that large hillfort can still be seen. Albeit the Romans had been in the area (there's a stretch of arrow straight road the way I came that stands out among the winding Welsh tracks, and James told me that a few remains of a smaller Roman fortress can be found near where he lives) there is no trace they ever tried to establish a Roman fort on the site. 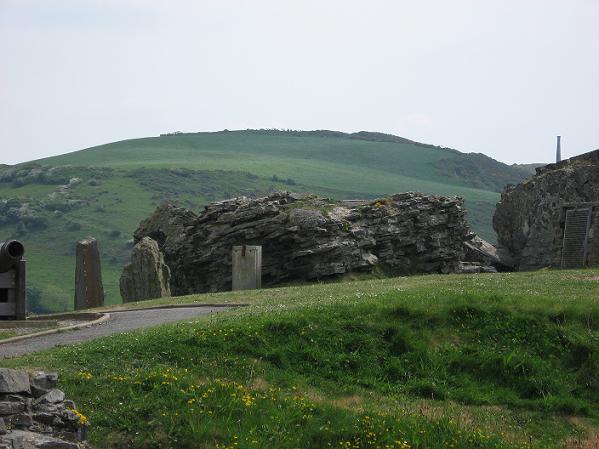 Pen Dinas, seen from the castle
To the far right is a slender pillar; a monument erected in 1852 to honour the Duke of Wellington's victory at Waterloo, paid by public funding. It's interesting to see what people in the 19th century were willing to support financially - we got the misplaced Hermann (Arminius) monument much the same way. Try that today and you'll get laughed at.

In the foreground are some of the stones that form a bardic circle of 13 standing stones symbolising the 13 old counties, pre the 1974 reform. The castle ruins have become a park today, a change Edward II might have liked better than his father. 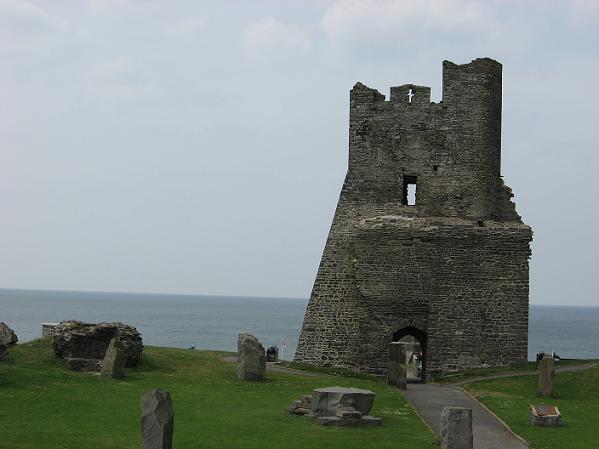 Aberystwyth Castle, one of the towers
But it was not Edward I who started the castle building at Aberystwyth, it was one of the Gilbert de Clares who erected an earthen and timber ringwork castle down at the river Ystwyth in the 12th century.

In the early 13th century, after he ousted the de Clares and other Norman chaps, Llywelyn ap Iorweth 'the Great' decided a hill by the sea was a better place for a castle than a valley and built the first one in the present spot. Makes one wonder why he didn't chose Pen Dinas, either. Like so many castle at the time, the one of Aberystwyth changed hands several times after Llywelyn's death as the Norman/Welsh wars moved to and fro. 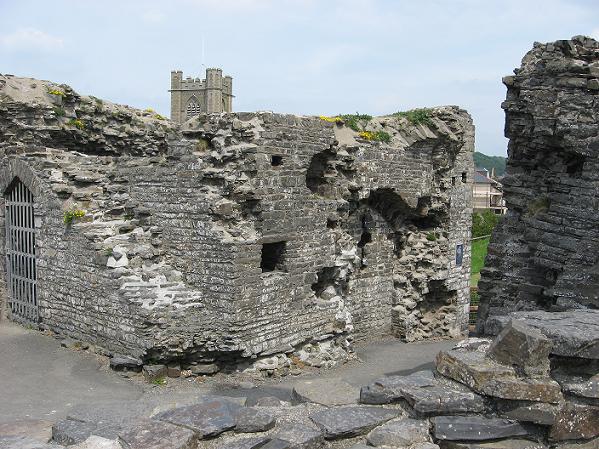 Aberystwyth Castle, remains of the inner bailey and hall
Edward I was the one who got really serious about the castle thing once he conquered the Welsh, and turned Aberystwyth castle into a structure as formidable as Caernarfon or Conwy. Our friend Master James was the official overseer though he soon left his associate Master Giles of St. George in charge and returned to north Wales. The modernising of Aberystwyth castle according to the standards of 1294 cost 'only' some 4,300 pounds.

The reason the castle is damaged much worse than Ed's other biggies lies in the fact that the sea is only a few yards away, and on a bad day not even that. Add to that the gales and torrents of a typical Welsh day, and even stone and mortar will crumble within time. The castle was beginning to succomb to decay as early as 1343, and the Civil War saw the end of it. 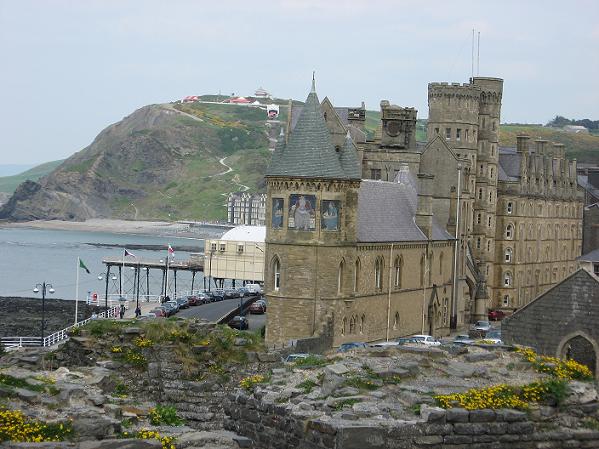 Old College with Constitution Hill in the background
What we got here is not a castle or cathedral, though it looks a bit like a mix of both, but the Castle Hotel, built 1872. It soon went bancrupt and was bought by the University College of Wales. It still houses some departments of the university, besides the newer locations at Penglais Campus and Llanbadarn Campus. The students surely got a pretty place to work in, but I wonder how often they'll find the Atlantic in the cellar. Let's hope they at least have a functioning central heating, something the Llywelyns, Owains, Henrys and Edwards will have sorely missed. Maybe that's the reason the Romans stayed away from the rain- and windswept Ceredigion Bay.

Comments:
I worked in Lynton, North Devon, for a while back in the mid nineties, and we could see Wales across the Bristol Channel. There was a local saying: "If you can see Wales, it's going to rain; if you can't see Wales, it's already raining." Given the climate in that part of the world it's amazing that any C12 stonework is still standing at all.

But how lovely the countryside is, and how much history crammed into such a small space!

Lo Satima, that's so true. Though I've been lucky when traveling in the UK so far, I got more good than bad weather days every time.

Aberystwyth and the surrounding countryside is, indeed, worth a longer visit. I spent many happy childhood holidays in those parts.

One of my dreams is visiting UK. Especially Scotland, but I will definitely not neglect England, Wales or Northern Ireland.
Thank you for this lovely presentation :)

Lol Lady D, the list of places to visit or revisit grows in no relation to my finances. ;)

Plan for a long trip, Dark Wolf. I had two weeks for Wales and didn't cover a third of what I'd have liked to see.

Do many hill forts get re-used as the sites of medieval castles? I haven't ever looked into this but I have the impression that most didn't; you get occupation in the Iron Age and sometimes again in the post-Roman period, but then they seem to be mostly left to themselves. I've heard it argued that Iron Age and post-Roman had similar (or at least, not dissimilar) subsistence economies, so they tended to use the same sites, whereas the Roman and later medieval periods shared a greater influence of trade and commerce and tended to use a different set of sites. I doubt the distinction was absolute but it may have a point.

It's an interesting thesis which I should look into. Though there are exceptions, Eildon Hill for example was used by the Romans (Trimontium). I got the impression they built their frontier forts according to Roman defense patterns but the ones that supported a foray into the land (Scotland or Wales) were set up more randomly, so why not use an already existing site? I don't know much about the Iron Age patterns in southern Britain which was completely conquered, so maybe there are different developments again. One surely was the rise of the country estate villas.

Wonderful tour of the castles and intriguing history, Gabriele.

Thank you for your wonderful comments on Shelley Munro's website today.

I must visit there. I'm hoping to get back to Wales next summer.
And pretty soon, when I finish Shadow of the Lion, I will resume work on my Celtic novel so a visit here might be very inspiring.

Wynn, you definitely should visit Wales again for inspiration. The Scottish westcoast is a good place, too.

Another great trip through both past and present. I can see how the weather plays a big part in the decay of the Welsh buidlings. I remember Wales being really green, although I think we managed to luck out and get sunshine during our visit many years ago. I'd love to return one day.

Shelley, most of Britain is very green from what I've seen so far.

Though if the summers here keep getting so rainy Germany will soon be a competition for greenness. :)

A great write-up Gabriele. It seems you learned more about Aberystwyth in your short visit than I've found out in nine years!

And it's always your own town you don't know much about; I should be better informed about Göttingen than I am, but there's always time to do it some day .... ;)

Having been a student at Aber for three years, it's lovely to see some pictures of it again (even though I only officially left in June...) Aberystwyth is one of those towns that you never stop being fond of. And it is a great place to be a student, especially when the sun is out; but I can certainly testify to the power of the sea against stone. On at least one occasion after a storm some slabs from the sea wall had been torn out.

Hi Rich, welcome to my blog.

I had the traveller's luck; the days was warm and hazy, and you could feel the presence of the sun. :)