23 Mar 2009
An Unfortunate Emperor
Here is the first of the posts about Otto IV in honour of the 800 year anniversary of his coronation as Holy German Emperor.

Some pictures of the Harzburg where Otto died in 1218 will illustrate this post. The Harzburg is a hilltop castle, one of the few that could have competed with the Norman whoppers once. Today not much is left, but a few featuers have been reconstruced to give an impression of its former splendour.

The castle had been built by Heinrich IV, was destroyed during his wars with the Saxon nobles and rebuilt in the 12th century when it was an Imperial possession. Later it fell to the Welfen family. 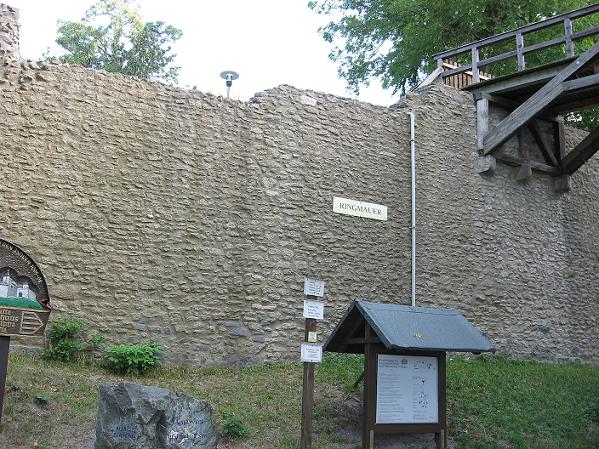 Otto was born in 1175 or 1176 as third son of Henrich the Lion (1133 - 1195) and Mathilda, daughter of Henry II of England and Eleanor of Aquitaine. When the emperor Friedrich Barbarossa exiled Heinrich in 1183, the family spent the time in exile with their English relations, first in Normandy and later in England. Little is known how life among the most dysfunctional family in Europe turned out for them, except that Richard Lionheart took an interest in his nephew Otto and made sure the boy got the best education his time could offer. Otto not only learned the knightly and military ways, but also benefitted from the Plantagenets' interest in literature, arts and music. 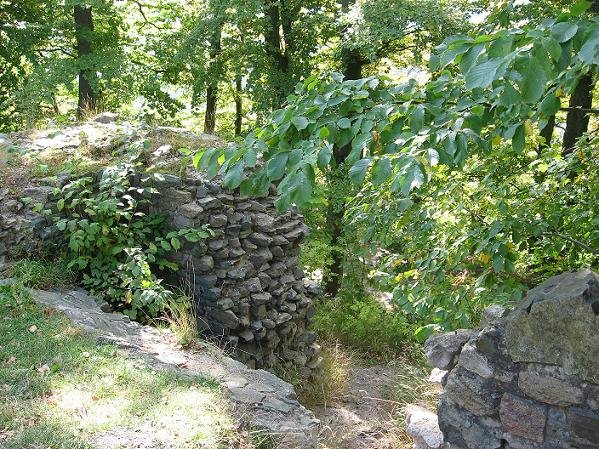 Remains of the lower gate of the Ostburg (Eastern Castle)
When Heinrich the Lion got pardoned and his allodial possessions of Braunschweig and Lüneburg were returned to him in 1185, the family went back to Germany, except for Otto who stayed at the English court. Richard, crowned king in 1189 and childless, wanted to make Otto his heir, but his attempts to endear him to the English barons by creating him Earl of York did not work out, and nor did a planned marriage with the Scottish royal heiress Margaretha. Imagine Otto had become king after Richard - in addition to the many Henrys/Heinrichs we'd have to deal with a second bunch of Ottos as well. *grin*

In the end Richard had to be content to give him the Poitou as fief and make Otto Duke of Aquitaine in 1196. Not a bad position for a third son - his oldest brother, another Heinrich, would inherit the Welfen possessions. 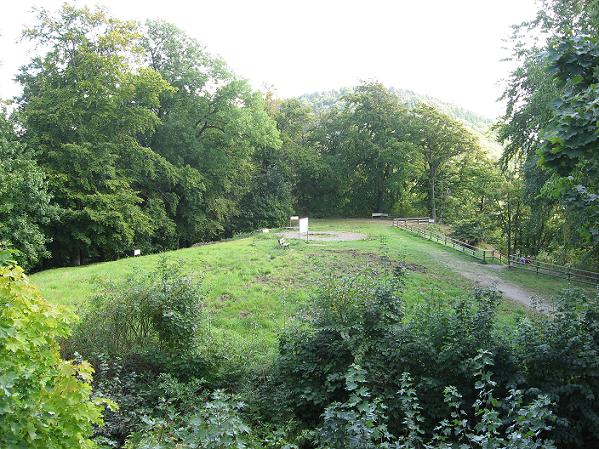 View from Otto's Tower across the remains of the Ostburg
When Richard was released from captivity in 1194, Otto was one of the hostages who stood in for him until the rest of the ransom was paid, and later fought at Richard's side in the war against the King of France.

Emperor Heinrich died in 1197. With Richard's support, Otto got himself elected King of Germany, but so did Barbarossa's youngest son, Philipp of Swabia. Philipp had the regal insignia, but the coronation was done by the wrong bishop in the wrong place. Otto had the right bishop and place (and the support of the pope), but no insignia.

The two men fought for power for the next ten years. Otto's brother Heinrich took example from the dysfunctional Plantagenet relations and changed sides a few times. 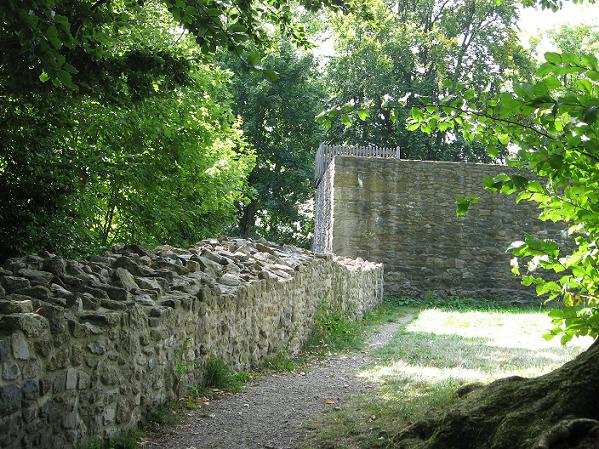 View towards the partly reconstruced Otto's Tower in the Westburg (Western Castle)
But when it finally looked like an agreement between both kings could be reached, and Philipp offered Otto his daughter Beatrix in marriage, he was assassinated by the Count of Wittelsbach. The count had been betrothed to Beatrix, so jealousy has been assumed as motiv - though, considering the fact the girl was only ten, it doesn't seem very probable. Offended honour and/or a larger conspiracy is a more likely reason, imho.

After Philipp's death, Otto IV became King of Germany, and in 1209 was anointed Emperor of the Holy Roman Empire by pope Innocent III. 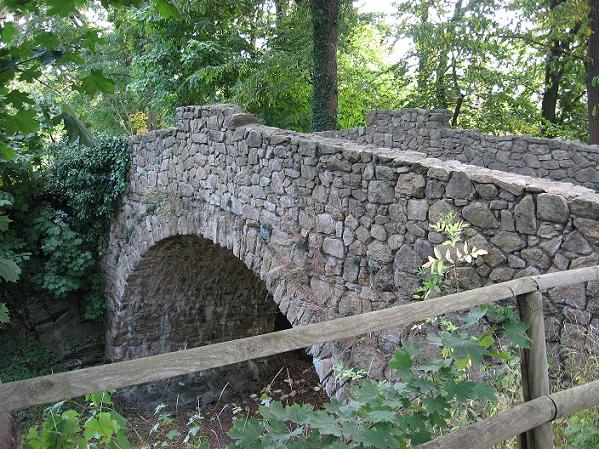 Bridge spanning the dike between Ostburg and Westburg
But trouble began anew when Otto turned his attention towards Sicily where Barbarossa's grandson Friedrich II had reached adulthood and faced an opposition of Sicilian nobles against the German House of Staufen. Otto supported those nobles who'd obviously have prefered a mostly absent Welfen ruler to a very present Staufen one. Pope Innocent didn't want to see Sicily and Germany united in one hand again, considered Otto an oathbreaker (Otto had previously promised to not contest papal supremacy in Italy) and excommunicated him. Why Innocent then allowed Friedrich to claim the German kingship is beyond me, because a united kingdom of Germany and Sicily is exactly what he got that way.

Friedrich received the support of most of the nobles and the free towns in southern Germany, the traditional Staufen territory. Otto's excommunication may also have played a role. Thus Friedrich was crowned King of Germany in 1212, and we're back to the situation of 1198-1209, only with Otto IV still being emperor. 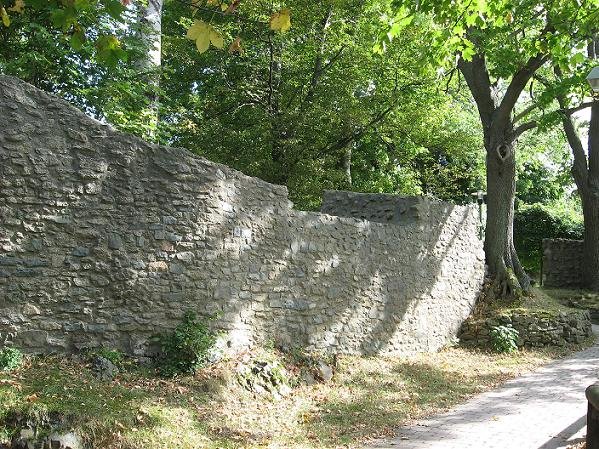 Westburg, curtain wall
Luck began to abandon Otto. His wife Beatrix died only a few weeks after their wedding in 1212, thus ending his family ties to the House Staufen and any hope of an heir who might have united both lines.

In 1214, the armies of the allies of Philippe August of France and Friedrich II fought against the hosts of the English king John Lackland (aka John Battle Shirker, because he was absent) and Otto IV, and defeated them in the battle of Bouvines. The outcome weakened John's position towards the barons and he had to accept the Magna Charta, but the situation was worse for Otto. In the years to follow his last allies abandoned him and he died, politically isolated, on the Harzburg in 1218, probably from a digestive disease. His remains are buried in St.Blasius Cathedral in Braunschweig.

Comments:
What an interesting post! I knew Otto was the nephew of Richard and King John, but didn't know much about him. Otto becoming king of England is a great 'what if'!

Oh yes, there's a plotbunny lurking. After all, my Fantasy NiP is based on the historical 12th century, esp. the time of Henry II, Heinrich the Lion, Emperor Barbarossa, King William and the whole merry bunch of rebels and dysfunctional family members. :)

It sounds to me as if they all had to keep their wits about them just to play all the power games. It can't have been easy being a King or any sort of ruler during those times.

Shelley, being member of a royal family in the Middle Ages was no fun, I take it. Though I wonder if it's more fun for the Prince of Wales or Victoria of Sweden today. ;)

Intresting post! Can you do one about Birger Jarl? Kidding. I have the history books :) Plus a really good novel about him!

I feel a really depressing tragedy just waiting to flow from my pen.

Married young, died without giving the Emperor an heir. Oh...one can see the winds of destiny whipping his hat off!

Thanks, booklover. I'm afraid I don't know much about Birger Jarl off my head, not enough for a post anyway. ;)
Do you mean the novel by Jan Guillou?

Stag, one anti-Otto source speculates the girl might have committed suicide, but since that was a capital sin for Christian, I think it says more about the chronic than the facts. ;)

What an interesting story Otto's life makes, especially considering his ties to Richard and John. I bet John was not too happy, either at the prospect of Richard making Otto his heir!

I don't know about a new Richard biography, but there is a recent book about John and Richard called Lackland and Lionheart by FJ McLynn: http://www.amazon.co.uk/Lionheart-Lackland-King-Richard-Conquest/dp/071269417X/ref=sr_1_2?ie=UTF8&s=books&qid=1238079558&sr=8-2. I don't know if that's any good.

By the way, all those Heinrichs...!

Lady D, several German emperors would make good novel or biography material. But while there are several good books about Heinrich the Lion, poor Otto is rather neglected.

Btw, my grandfathers were named Heinrich and Otto - those names remained popular until about WW2. :)

I second all the comments above - what an interesting post! I wonder what John thought about the connection between Richard I and Otto! Limitless material for conspiracy theories here :-)

Thank you, Carla. I bet Johnny wasn't too happy about the competition, but on the other hand, he must have trusted Otto enough to lead both the German and English troops at Bouvines, or he would not have stayed at home.

I really appreciate these posts and photos, Gabriele, as they fill in the gaps in my memory from history in school (such a long time ago). You will be mentioned in my acknowledgements for my second manuscript novel as supplying historical information.

A quite belated comment, after scrolling through all the gorgeous pictures. I notice with amusement the year in which he began his stay in exile with Henry II. Presumably he'd have been with the family for Christmas ...

Lol, that would have been quite an addition to the party. And probably some talk about Richard and Otto. ;)

John trust somebody? More likely it fit his purpose not to go - he avoided many battles - and how many influential continental or Other rulers or "names" could he count on? Lucky for him Otto's loyalty could be counted on. Not so John's, and obviously did Otto more harm than good.

Gloria, that is well possible. One may wonder what might have happened if John had put a bit more effort into that battle and he and Otto had won. Maybe a Welfen line on the German and Roman throne?

Gabriele, first time at your post. I love this article and the pictures. I specialize in the 12th Century life of Eleanor of Aquitaine. Kasia sent me, and she's always right.