28 Apr 2009
The Palatine Seat and Monastery of Pöhlde
Or what is left of them, which is not much. Pöhlde is a sleepy village today, especially on a warm Easter sunday afternoon, but it once played an important role in history as one ofthe palatine seats of the German emperors. Today only a few foundations of those old buildings are left, and a 17th century church with some pretty Renaissance wood paintings showing Biblical themes. The interior has been renovated last year to protect the wood from water damage. 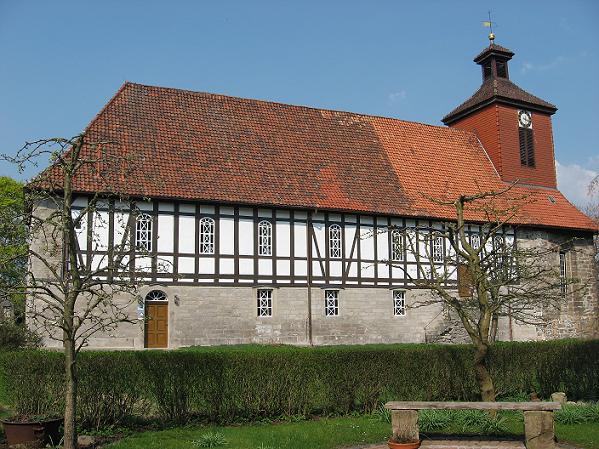 Pöhlde Church, seen from the west

Pöhlde is first mentioned as Polithi in a charte dating from 927 in which Heinrich I 'the Fowler' (919-936) gave the palatine seat, at that time more or less a country estate, to his wife Mathilde. She lived there as widow and gifted parts of the land to the Church to have a monastery built. Her son Otto I granted the monastery of Pöhlde a number of priviledges; and it developed into an important and rich one with territorial possessions and tithing rights spreading as far Frisia. The palatine seat at Pöhlde became the so called Weihnachtspfalz of the Ottonian emperors, the place where family and court would meet during Christmas. 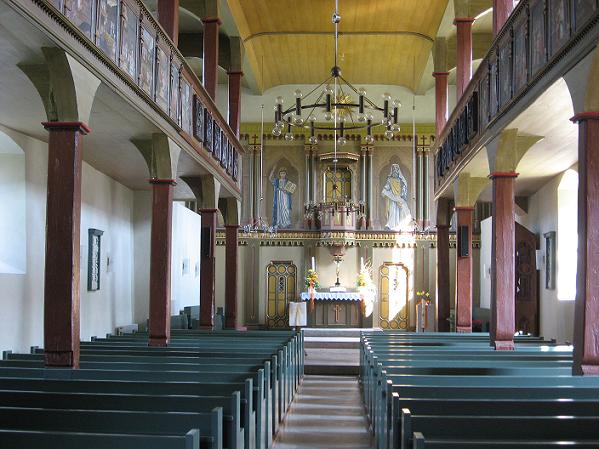 Pöhlde Church, interior
Not all events having taken place in Pöhlde were peaceful. In 1002, Siegfried and Benno of Northeim and Heinrich and Udo of Katlenburg (another small town between Göttingen and the Harz) killed Ekkehard Duke of Thuringia who spent a night in Pöhlde castle. He claimed a right to the throne, and the men might have hoped to be rewarded by Heinrich II for that rather cowardly murder. They were mistaken, though, and instead lost their titles and land. It took several years until Benno of Northeim became reconciled with the king and regained his rank as count and his possessions. He was the father of Otto of Northeim whom my readers may remember from some posts. 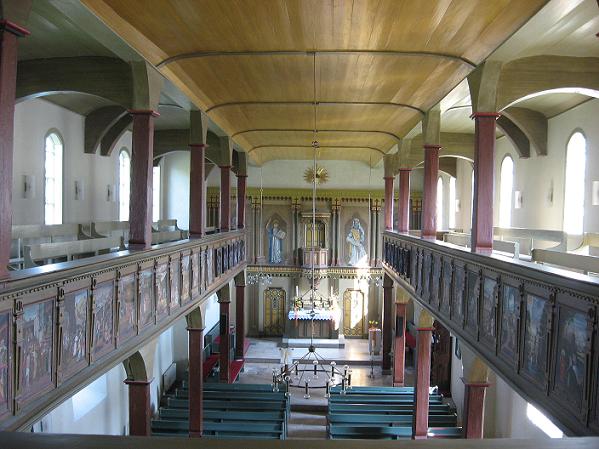 View from the gallery
The Romanesque church was destroyed by a fire in 1200 and re-erected in the Gothic style. Both church and monastery were damaged during the peasant war (Bauernkrieg) in 1525, and shortly thereafter the Reformation was introduced to Pöhlde. During the Thirty Years War the church was destroyed and a new, smaller one construced on the foundations of the main nave (1668). Parts of the former aisles and the cloister have been discovered during excavations. It once must have been a pretty large church. 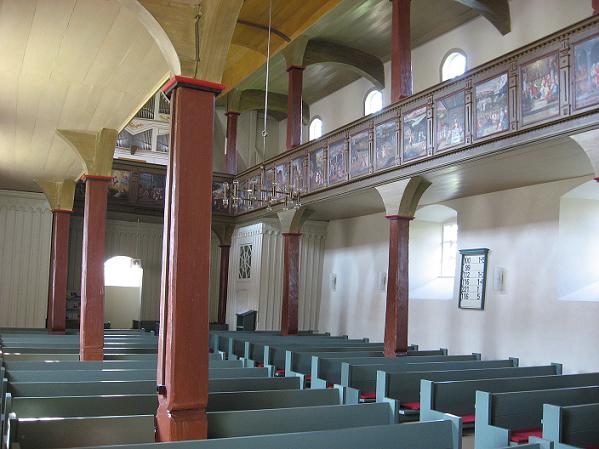 Closeup of the gallery balustrade with some of the paintings
The remains of the palatine seat had been excavated as well in 1964-70. It lies north of the church and once encompassed an area of about 1700 square metres with 12 buildings with stone foundations (there may have been more buildings without those), including a great hall which dates back to the 10th century. A passageway connected the palatine seat with the church. The foundations have been covered again to preserve them, and today the village priest has his garden there. I doubt the roots will do the old stones any good. It would have made more sense to add a bit mortar to keep the remaining walls from tumbling further and display them to the public. But that's more expensive. ;) 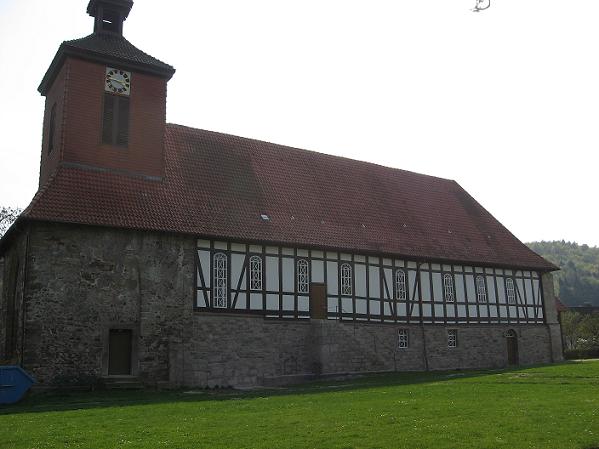 The chuch seen from the east - the side where the cloister had been
Below the remains of the palatine seat older finds have been made, mostly dating to the younger Iron Age and Imperial Rome which prove a long tradition of settlements in that spot. The Roman items sound intriguing in the light of the new finds in the area - were they more than just a few traded goods?

There is no plan of the excavated palatine buildings in the guidebook (which is but a leaflet anyway), but it confirms the finds of Tilleda: Those 10th century palatine seats were divided into several buildings, mostly timber or wattle and daub on stone foundations, and encomprised a great hall; the whole area was surrounded by earthen walls and palisades.  ¶ April 28, 2009

Great photos, and thank you.

So very lovely. Thank you so much for sharing!

Great photos. That is a cute little Church.

My google reader won't let me in and now I have to travel the old way.

My Opa grew up here, and I've visited twice to see family. It's a beautiful village.