13 Oct 2009
Europe's Largest Quadriga
The quadriga atop the Brandenburg Gate in Berlin may be the most famous, but the one on the portico of the palace in Braunschweig is the largest in Europe. The present one has been standing there but a year, but its history goes further back.

The neo-Classicistic facade is in fact hiding a modern shopping mall. Of course, the shopping centre is larger than the former palace, but the modern part with its glass facades is so well integrated that you don't see it when approaching the palace from the direction of the castle square. 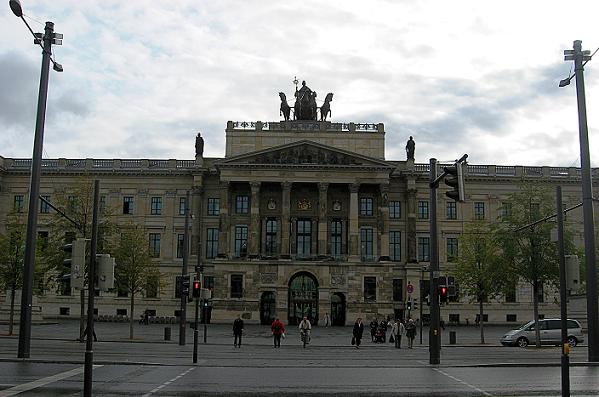 Front of the Palace in Braunschweig, with the quadriga on top

The original palace, residency of Duke Wilhelm of Braunschweig-Lüneburg, had been built in 1833-41 to the plans of Carl Theodor Ottmer. The quadriga was part of the original plans but was left out - together with other expensive statues and colonnades - because the duke wanted to save money.

In 1856 Duke Wilhelm celebrated 25 years of government, and the citizens of Braunschweig gifted him with the quadriga. Sculpturer Ernst Rietschel from Dresden designed the model; the quadriga was then crafted in copper repoussé technique by Georg Ferdinand Howaldt, a coppersmith from Braunschweig. 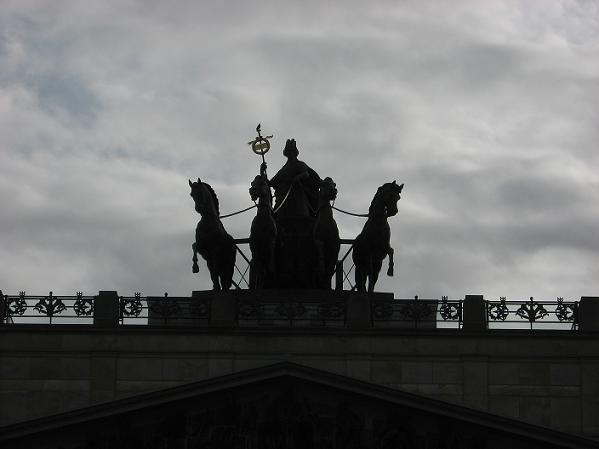 Closeup against the sky
A fire destroyed part of the palace in 1865, and the quadriga became its victim as well except for the head of the charioteer - or charioteeress, the allegoric town goddess of Braunschweig, Brunonia. Howaldt made a second, somewhat smaller version that was installed on the restored palace portico where it remained until the end´of WW2.

Much of Braunschweig itself and parts of the palace were destroyed by bombs during the war, but the quadriga survived only to fall victim to metal thieves after the war - copper was much sought after. The remains of the destroyed palace were further dismantled and for many years a park marked the fomer residency of the Dukes of Braunschweig-Lüneburg; a line of the House Welfen and thus related to the Import Kings of England George I - III. 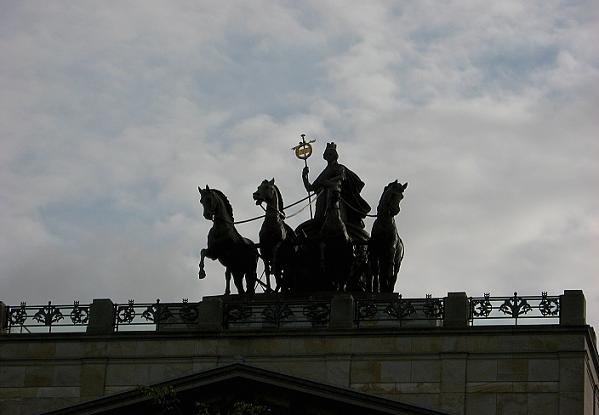 Seen from the side, with a furtive ray of sunshine tinting the bronze golden
During the last years, the palace has been reconstructed using old plans and photos, as well as about 600 original pieces salvaged from the WW2 debris. The mall hiding behind the palace facade opened in 2007, and in October 2008 the new quadriga was installed on the portico. It is based on the original 1:3 gypsum model by Ernst Rietschel which still stands in the Albertinum in Dresden (a sculpture museum), but this time it was made of silicium bronze which is cheaper than copper. Duke Wilhelm of Braunschweig-Lüneburg wasn't the only one who had to look at his budget. Though they did go back to the larger version. 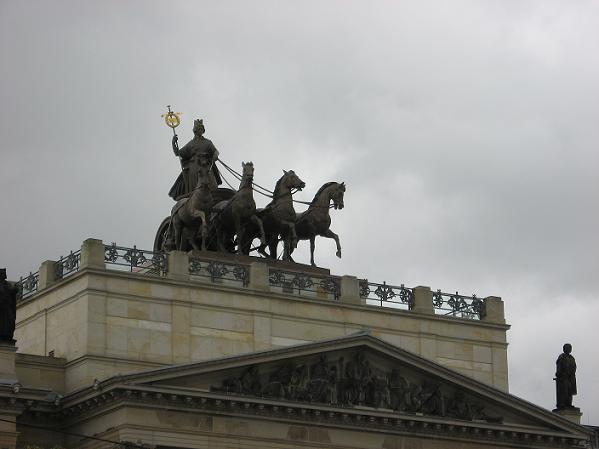 Seen from the other side, with a good view of Brunonia
The entire group is about 9 metres high, 9.5 m long, 7.5 m wide, and weighs 25.8 tons. Brunonia alone stands at 5.30 metres; her head was modeled after the original that had been saved from the fire in 1865. The bronze has its original, red golden colour now but it will develop the typical green patina over time.

The platform on which the quadriga stands can be visited at certain times, but that's an endeavour for sunnier weather than we had.   ¶ October 13, 2009

Comments:
That really is something, I miss not seeing this sort of history living in Australia. I think it is the history that I miss most. Thanks for sharing this.
Le loup.

You're welcome, Loup, and thank you for your kind words.

Carla, I definitely plan to go up on that platform and have a close look some day.

I wish we had a building tall enough to put something like that on. *g* I think a chariot would look dashing out here in the periphery.

Constance, just put it in the middle of the prairie. :)

It does, Alianore. People in the 19th century really liked their statues big. ;)

I've never heard the word 'quadriga' before so thanks for teaching me something I didn't know :-). And it's a spectacular piece of artistry!

That's pretty cool. I ask one thing out of ignorance and add another which is trivia and you may know: firstly, is Brunonia there wearing a mural crown? It looks as if she is in which case she's presumably a type of Tyche? Secondly, I just read the other day something that I did not know, that Lüneburg is allegedly so named for a Slav people called the Linones whose language survived in Poland until the seventeenth century, but whose only historical appearance anyone seems to know of is a losing match against Charlemagne's armies in 812 or so. There can't be many places to find so much passing reference to thoughtworlds separated by thousands of years and miles than in commemorative art, don't you think?

Lady D, the word goes back to the old Romans. :) They used quadrigas for chariot races and triumphal parades.

Jonathan, Brunonia is wearing a mural crown indeed, resembling the old town walls of Braunschweig, I guess, since she's the allegorical goddess of the town.

I have not heard that story about Lüneburg, but it's not impossible. The whole area was settled by Slavic tribes in the Middle ages that got pushed further east as the German kings/emperors expanded their posessions. Heinrich the Lion fought the Wendes and Abodrite (or Obodrite) for years, a war that was considered a full fledged crusade by the pope. The ducal house of Mecklenburg traces its ancestry back to the very King Pribislaw whom Heinrich finally forced to become his vasall, and it still gives the county of Mecklenburg-Vorpommern at the Baltic Sea its name. There are still Slavic minorities in that area that keep their languages alive - the best known is Sorbic that celebrates some sort of revival these days because of the modern media.

What little I could find seems to indicate that the Linones got swallowed politically into the Wends as far as those fighting them or converting them were concerned, so that makes sense. None of these names really mean anything biological, just as with Franks, Lombards, etc.

The mural crown—I guess you know this!—is a lot older than this, it's the way that Tyche is represented on ancient Greek coins, each city having their own version of her, so this is a very old tradition being used here, older than the quadriga (which is only, y'know, Roman :-) )...

I have always liked the equestrian statues in Germany and other countries in Europe. Thanks for history behind them.

It looks a bit like the one in Venice.

Jonathan, I assume you're right, those people often got swallowed, esp. with the settlement politics of German kings and nobles who often pushed Christianizing by bringing in people from other areas to live among those heathens. Heinrich the Lion did a lot of that in Mecklenburg, and Charlemagne forced several Saxon settlements to migrate to places where he could better control them. Such things lead to a loss of identity within a few generations.

Thank you, Barbara and Stag.