26 Mar 2010
Sea Gulls
Almost a week without a new post? Oopsie. *grin* Well, here’s a lazy one; just some more photos of sea gulls. Because they are fun. 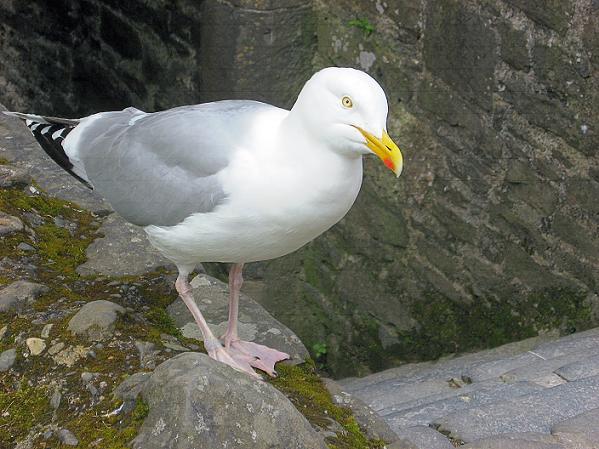 Thou shall not pass!

Though I bet, contrary to Gandalf, this guy would have been bribable. Found him perching beside a staircase in Conwy Castle. 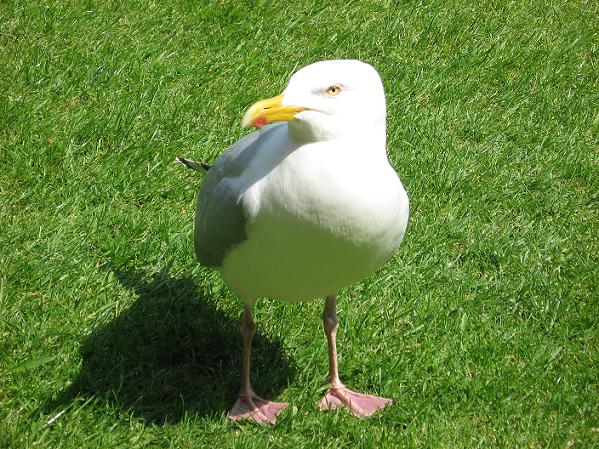 I want a cookie
What do you say, I should eat fish? Cookies are so much yummier.

That one pestered me in Beaumaris Castle when I had a little tea and cookie break, and didn’t want any arguments about healthy gulll food. Some gulls were not shy, but they never allowed a human close enough to touch them. 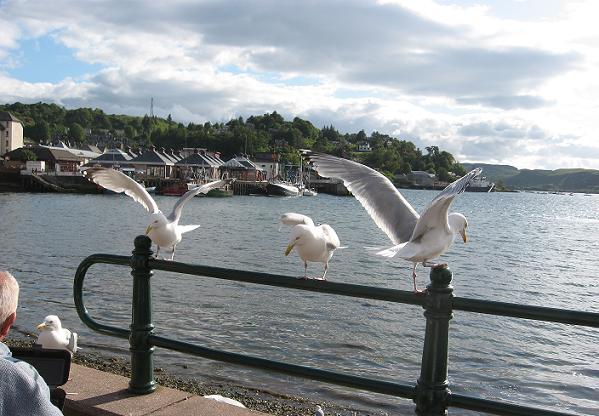 Gull acrobatics
Hey, I was first! No, I was, cheater! You're so mean to me, I'm not gonna talk to you again; ever.

Gulls sorting out who's where in the food line. This lovely photo with the evening sun sparkling on the water is from the harbour in Oban. Too bad the picture doesn't come with sound; those gulls made quite a ruckus. 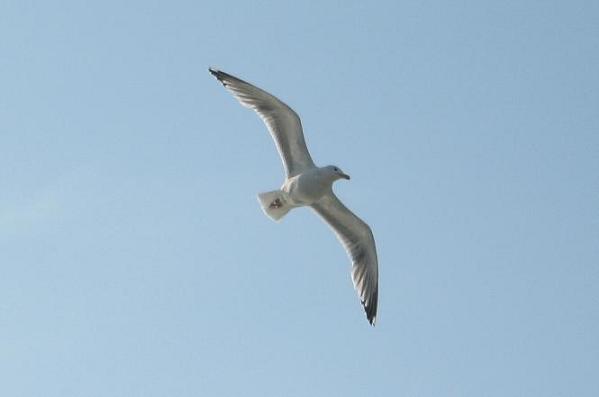 Beauty in the sky
Gulls are really elegant birds when flying. I took this shot on the ferry to Mull. There were several gulls whirling around in hope of flying cookie crumbs. Which they duly got.  ¶ March 26, 2010

Comments:
Heehee, funnily enough I also have pics of greedy gulls at Beaumaris who were very interested in my biccies. :-)

Hehe - loved those. Seagulls are so funny - just as long as they don't steal your chips! I always think of the seaguls in the film Finding Nemo: 'Mine! Mine! Mine! MIne!'

Must be a local breed, Kathryn. :)

Jules, they do squabble about food a lot - not the best table manners, for sure.

Well do I remember, when staying with Scottish relatives in my youth, taking my bike the ten miles or so across the relevant peninsula to the local lifeboat station, which is a busy but little tourist and fishing port (including one tiny boat named "This Way Up" which I adored immediately). Being naïf about such things, when a seagull (a herring gull with a wicked and intimidating bill) approached me to try and scam some of my sandwich, I threw him or her a crust. At which point, rather than grab, he or she took four or five paces back, threw his or head up and basically yodelled "sucker!" to the assembled seagull population, or at least that's what I guess it meant as they arrived in numbers shortly afterwards, and by the time I had finished my lunch I had about twenty around me, all shouting and looking as if they were wondering who should be first to try rushing me. I quite like gulls; but I'm careful of them...

Lol, that must have been an organised robber gang.

Pretty gulls! I love the pictures! Ha, you have been a mere week without a post? It has been much longer for me. Monsire Kai is not pleased with me. But I did say I might be sporadic. ;P

Handsome photos of handsome birds! Herring gulls are great at posing for a camera - they don't seem to be the least bit afraid of anything.

Like tenthmedieval, I like gulls but am wary of them. Those beaks look like they could do quite some damage if they decided to try demanding chips with menaces.

Carla, I'm careful around them. And I never started feeding gulls; I can imagine where that would end. ;)

Lol yes, that's the translation of gull speech - or should that be gull screech? :)

I am fond of gulls.
These are excellent shots, Gabriele. I hope you will investigate the possibility of selling your photos commercially as an earlier poster suggested.

Thank you, Bernita. I've actually sold a few albeit I do not actively pursue that venue.