17 Apr 2010
The Gospels of Heinrich the Lion
The Evangeliar Heinrichs des Löwen may be somewhat less well known than the Book of Kells, but it's more expensive. And very pretty, too. The book is kept in a safe in the Herzog August Library in Wolfenbüttel (near Braunschweig) and is only shown to the public on rare occasions. But facsimiles are displayed in several places connected with Heinrich and/or the manuscript, fe. in the cathedral in Braunschweig and the parish church in Helmarshausen. Thus I've collected some photos last year. 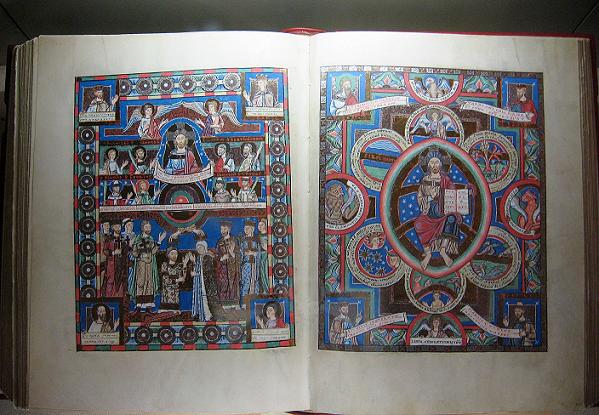 Double page displayed in the cathedral in Braunschweig

The Gospels with their 50 miniatures had been commissioned by Duke Heinrich as donation for the St.Blasius Cathedral in Braunschweig, in particular the altar dedicated to Virgin Mary. The book was crafted in the Benedictine Abbey of Helmarshausen, one of the rich Mediaeval abbeys along the Weser (I've mentioned the abbeys of Bursfelde and Lippoldsberg in several posts, but not much remains of the buildings in Helmarshausen). Construction of the cathedral in Braunschweig started in 1173, the altar of Virgin Mary was consecrated in 1188. Thus, and because historians never agree on something, we get two possible dates for the Gospels: 1173-75 or 1188. 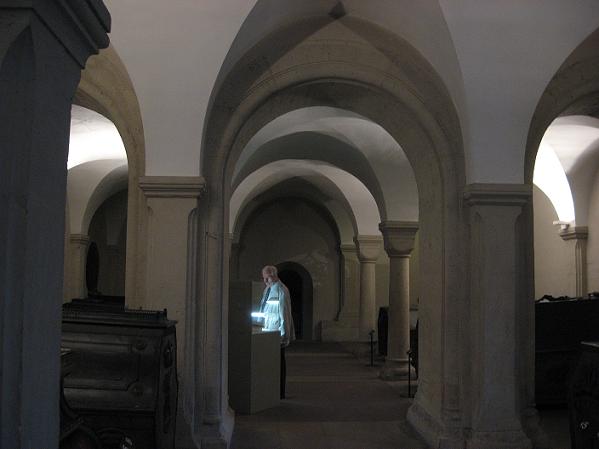 St.Blasius Cathedral in Braunschweig; the crypt,
with my father standing in the glow of the illuminated Gospels facsimile
The Gospels of Heinrich the Lion became a private possession of the Welfen family in 1866, who transfered the manuscript to Austria where it disappeared during the world wars. It popped up again as an anonymous delivery to Sotheby's in London in 1983. After it had been confirmed to be genuine, the German government, the counties of Lower Saxony and Bavaria (once Heinrich's dukedoms), the Prussian Cultural Heritage Foundation, and a number of private donators threw together a truckload of money and bought the book at an auction for 32.5 million D-Mark (£ 8,140,000, more worth in 1985 than today). Only Bill Gates spent more on a manuscript when he bought Leonardo da Vinci's so called Codex Hammer in 1994. 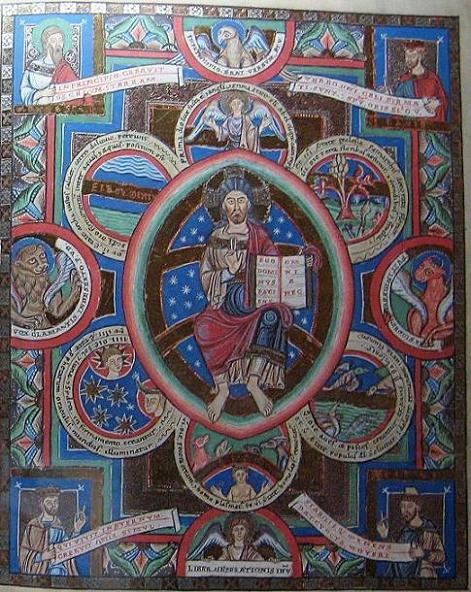 The Creation
The facsimiles are quite expensive as well and kept under glass which makes photographing a bit tricky, but I managed some unblurred shots.

When I saw the original I was amazed how well preserved the mansucript is. The facsimile versions don't tamper with the colours; all that gold, silver, purple and indigo is so bright and clear - in fact, the gold is somewhat duller in the facsimile version. A few letters have faded, but that's about it.

The Gospels of Heinrich the Lion contain 266 pages with the text of the four gospels, decorated with 50 full page miniatures, and further embellished with some 1500 smaller and 84 larger initials laid out in purple, gold and silver ink. It is one of the finest examples of Mediaeval manuscripts and counts as one of the most important works of Romanesque book illumination. The book was displayed in an exhibition in Braunschweig in 1986, so I had the rare chance to see the original. 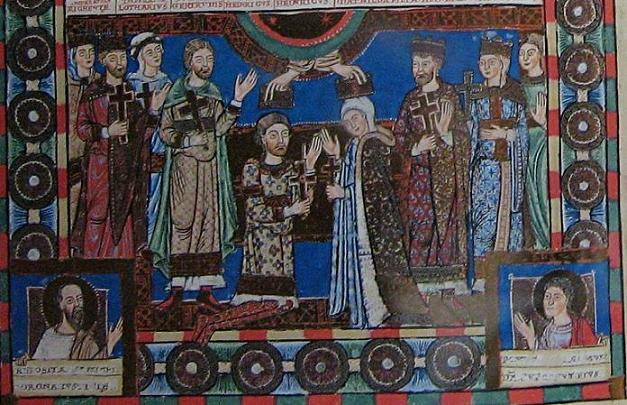 The Coronation, closeup (cfr. first picture, lower left)
One of the most famous illuminations is the Coronation. It shows Heinrich the Lion kneeling in the centre, behind him stand his father Heinrich the Proud, his mother Gertrude, and her parents, Emperor Lothar of Süpplingenburg and Richenza of Northeim. Mathilde is accompanied by her father, King Henry II of England and his mother Maud (Mathilde). There is another 'unidentified person' on her side, but Henry didn't bring the rest of his dysfunctional family along which I find quite telling. Both Heinrich and Mathilde are richly dressed and hold golden crucifixes. The crowns which Jesus presents to them are probably to be interpreted as crowns of eternal life, not of some worldly rule, which is confirmed by the text in the banners. 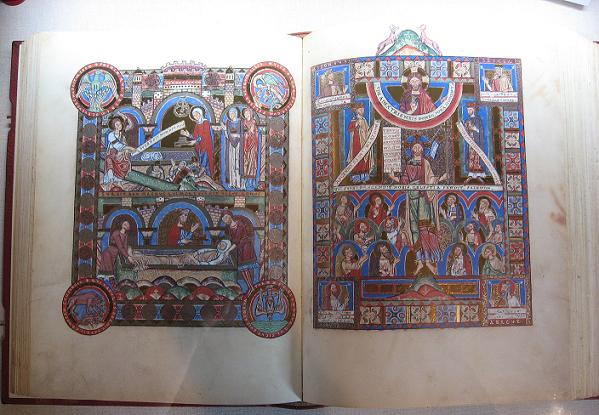 Another double page, displayed in the parish church of Helmarshausen
Heinrich was never crowned, but one may wonder if there is not a political subtext to the picture, a claim to the position of emperor - Heinrich's claim was as good as Friedrich Barbarossa's in whose favour he had stepped down (in exchange for Saxony and Bavaria). If we assume the earlier date for the manuscript, it would fall into the time when Heinrich's conflict with Emperor Barbarossa started, while the latter date would be after Heinrich's first exile, thus in a time when he had lost most of his power and was less likely to have any ambitions towards a crown. Though Barbarossa never trusted Heinrich; when he went on crusade (where he died), he sent Heinrich back to England. The omission of Eleanor and any of King Henry's sons points to a time when that family had broken apart for good. 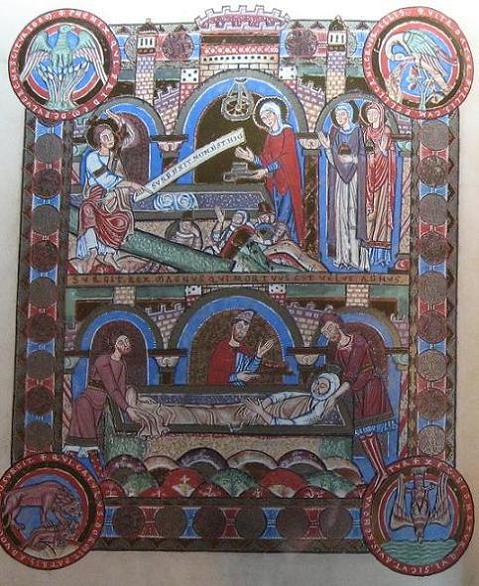 The Burial of Jesus
We can't say for sure, and a double meaning may well have been intended. The Gospels stand in a tradition of religious foundations to gain bonus points towards a place in Heaven, and it's clearly stated in the Dedication picture and text that Heinrich and Mathilde dedicated this 'gold-gleaming book' to Christus in hope of eternal life.

Mathilde's love for books extended to the vernacular - she comissioned the German translation of the Chanson de Roland. In that she was a worthy daughter of Eleanor of Aquitaine. 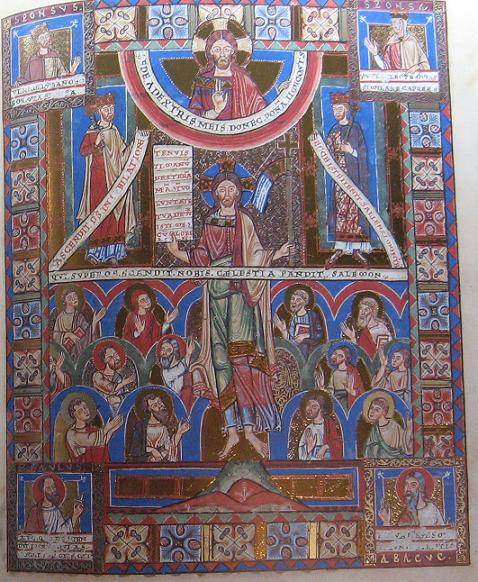 Christ's Ascension
The codex stands in a tradition of book illumination that had its first peak at the time of Charlemagne. But also the Ottonian emperors comissioned some beautiful manuscripts (pity that photographing wasn't allowed in the Magdeburg exhibition I visited some years ago).

Another interesting aspect is the fact that we know the name of the artist: a monk Heriman who names himself at the end of the Dedication poem. Abbot Konrad II had ordered him, Heriman, to create that codex which was comissioned by Duke Heinrich. It is very unusual for that time for an artist to identify himself. There were a few writers who added their name, beginning with the mysterious Turold who wrote the Chanson de Roland, to Jehan Bodel, Chretien de Troyes and others, but it was even less common for artists like manuscript illuminators. Though one can't blame Heriman for being proud of his creation. 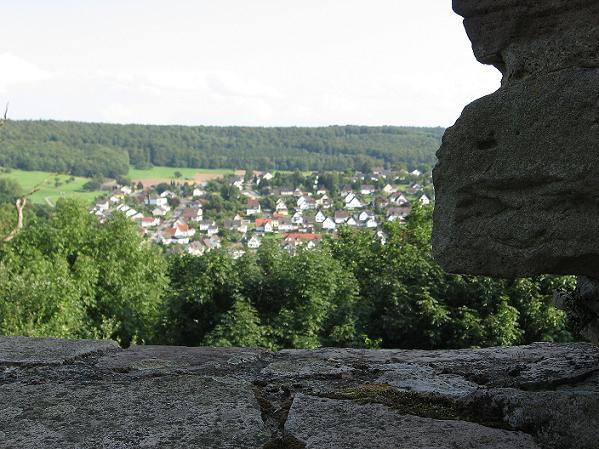 Helmarshausen, seen from Krukenburg Castle
Helmarshausen is now part of the larger town of Bad Karlshafen. Landgrave Carl of Hessia wanted to establish an efficient and competitive textile industry and in 1685 invited Huguenot refugees from France to settle in Helmarshausen to help him in the endeavour. They built what later was to become Karlshafen (Carl's Harbour), a well structured town centered around a harbour. You can still see that the town was planned at the drawing board and didn't grow out of older settlements like many other places. 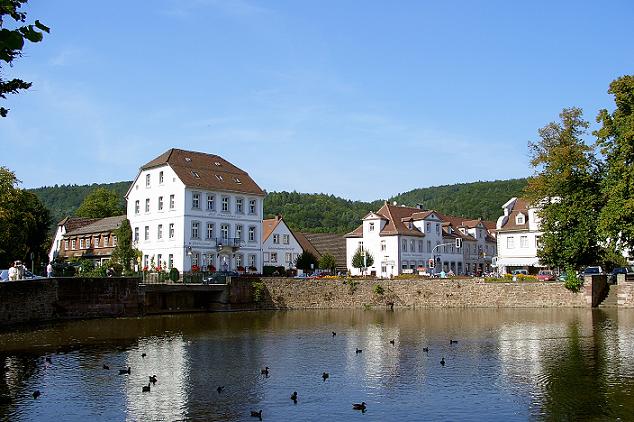 Karlshafen, Old Harbour
The harbour that gave the town access to the Weser river and the North Sea, was one of Landgrave Carl's favouite ideas because it offered him a chance to avoid the tolls of Münden, a town belonging to the House of Brunswick-Hannover. The harbour, built in 1713, is no longer in use but still graces the town with a nice water scenery.   ¶ April 17, 2010

Comments:
Wow - that is really beautiful. Thanks for sharing your pictures!

Your picture is thousand times better.

Wow, how gorgeous! Thanks for sharing these pics, Gabriele! I wonder what on earth happened to it when it disappeared between the world wars until 1983.

Thank you, Daphne and Kathryn.

Hank, thanks for the link. I finally found out what the last picture from the codex shows - Christ's ascension.
I have to keep the moderation on; some troll sent me pics of ... erm, excited penises.

Heriman had every right to be proud of his creation. What a truly amazing manuscript. Thank you very much for posting your pictures!
There ought to be a story in the manuscript's disappearance and reappearance - sort of Dan Brown crossed with Indiana Jones...

Yes, you are right. Thats a definite pretty thing all right!

It funny...I use this book as a lesson plan for my classes on medieval fencing! But it is in Medieval German, and I don't think even you could make heads or tails of the written parts! But the illustrations speak louder than words.

Exquisite!
Love the picture of your father among the weight of shadows too.

I puzzle about this `artists don't identify themselves' bit. It's not common in tenth- or eleventh-century France and Germany, no, or even England, but I can easily find you some identified ones in Spain. It's part of this 'discovery of the individual' bit where something that was actually a passing phase gets taken to be definitive for the whole of the past. I'm pretty sure the Romans had a concept of the self, for example.

So Heriman was perhaps unusual, but we could see that already because the painting is so gorgeous. Thankyou for posting the pictures, and sorry to use it as a stance to deliver a pet rant from, but, you know pet rants, they need walking a lot.

I love illuminated manuscripts. Beautiful work, thanks for featuring it. :)

Jonathan,
don't worry about ranting about something that matters to you. I perhaps made it sound even more rare than it was, but I've read my share of essays about the Chanson de Roland and how unusual those last lines mentioning Turold are - and who Turold was in the first place. ;)
There is definetly a trend for names to appear more frequently in the 12/13th centuries, but since we know the writers of several works from the time of Charlemagne, it was nothing totally new, either.
The Romans are a different matter; they always signed their books and statues. :) They didn't create them for the praise of God, either. I suppose that's the main reason for not putting yourself forth as artist in the Middle Ages; it was the aim that mattered, not the craft. It's somewhat telling, I think, that many examples of known authors come from vernacular texts or texts with worldy content, like the pseudo-Turpin chroniclce, or maybe even Einhardt's Vita Karoli Magni. So for an illuminator of a gospel book to mention himself is a bit more unusual than for an author to do so. Heribert also mentions not only his own name, but the one of his abbot, Konrad, as well who ordered him to do the work. Though since that name dropping happens in the Dedication where it is said that Duke Heinrich had this book made for the honour of God and the Holy Virgin, it does look a bit sneaky. :)

Sorry...there was supposed to be a link in the word "this" on my above post. Without the link, the post seems to refer to The Gospels of Heinrich the Lion, instead of another lovely contemporary book which I use for my classes.
Sorry for the confusion.

The link, which I thought your readers might like as well as the lovely Gospel pictures was this one.

There. All spelled out!!