26 May 2010
A Rainy Rhine Cruise
The Rhine between Koblenz (the ancient Confluentes, where the Moselle confluences into the Rhine) and Mainz (where the Main river joins up with his big brother) is considered the most scenic. Because of the mountains, the river could not be straightened like it was done in other places to make naval transport easier; only some of the riffs and sandbanks that made travel on this part of the Rhine dangerous in Roman and Medieaval times have been eliminated, albeit the sandbanks are an ongoing problem that has to be dealt with regularly. 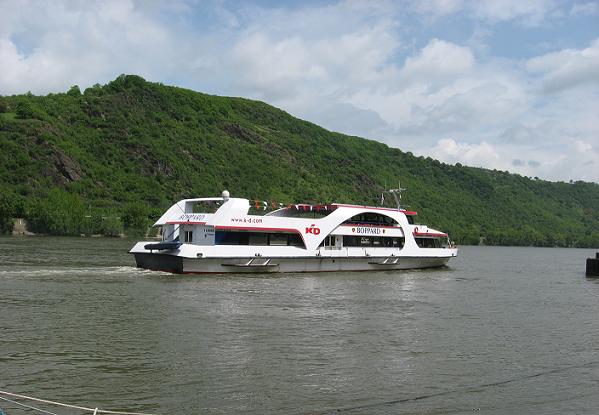 One of the cruise ships

There are a number of cruise ships that travel this part of the Rhine. I picked one from Boppard somewhat upriver of Koblenz to Bingen near Mainz; a trip that took four hours (it's some 25 minutes by train). The fleet is called Köln-Düsseldorfer which is a bit of a joke, because the towns of Köln and Düsseldorf (both further north) are old rivals. There were not many people onboard due to the bad weather. 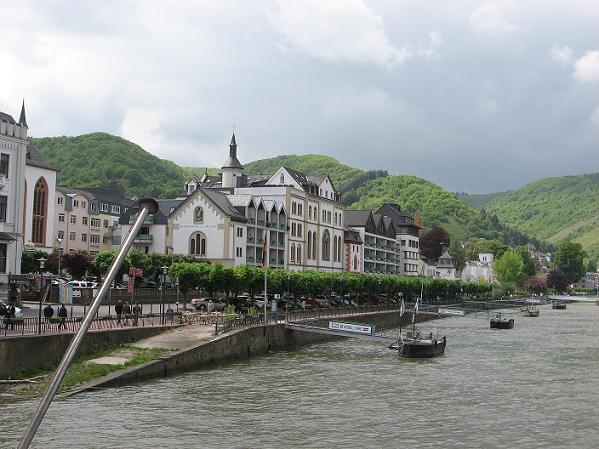 Leaving Boppard
Boppard is a pretty little town like so many along that part of the river - there's no space to develop into big, ugly cities. Most of them have a long history dating back to Medieaval or Roman times and some, like Boppard, are even older.

There's a bit of sunshine, but you can see the dark clouds ominously gathering over the mountains. 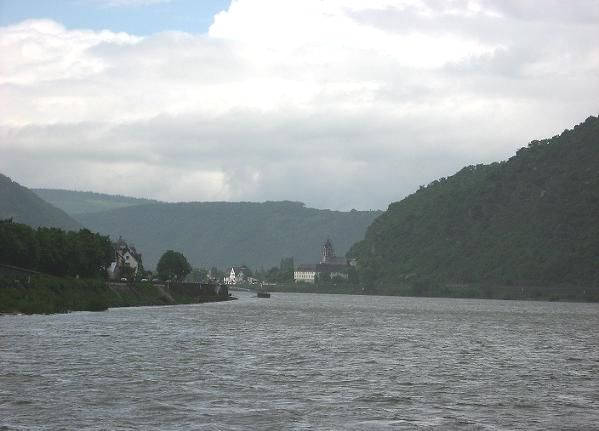 Dark waters and dark sky
It didn't take long for the rain to pour down, and it more or less stalked us - I suppose bad weather uses river valleys as highways. Photographing became a challenge because of the light, or lack thereof, and the rain that made the pics blurry. It can be a veil indeed. The few tourists on the upper deck vanished downstairs, but I ordered a hot tea and held out until St.Goar to take photos. But it was too cold to stay outside the entire 4 hours, so during the later part of the journey I only went up for special sights. 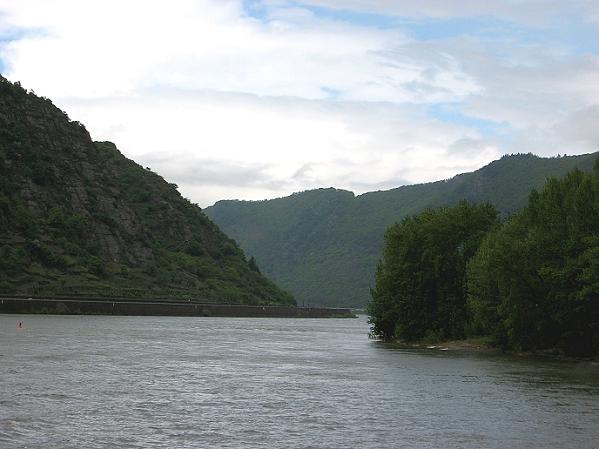 A meandering river
In former times, the Rhine meandered like that from its origins in Switzerland to the North Sea; it's the Rhine the Romans knew. Today it has been straightened where possible, leaving old bends as lakes in some places (the Altrheinarme), while they were filled up in others. Part of the flood problems is caused by those changes. 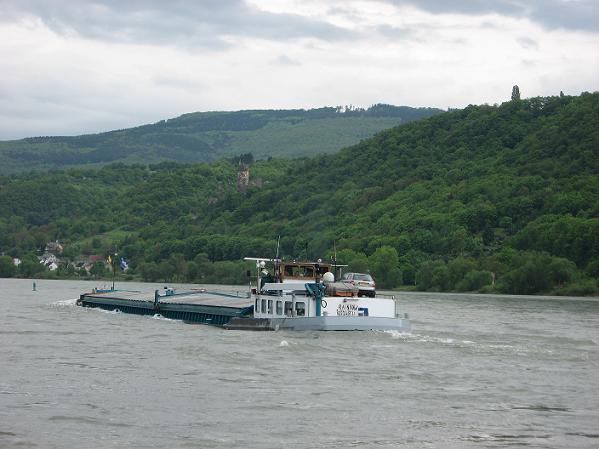 A cargo vessel
The Rhine is an important shipping route and the transport ships are long, unwieldy things with houses at one end where the shipper and his family live. Complete with curtains and potted plants in the windows, and a car parking on the upper deck. 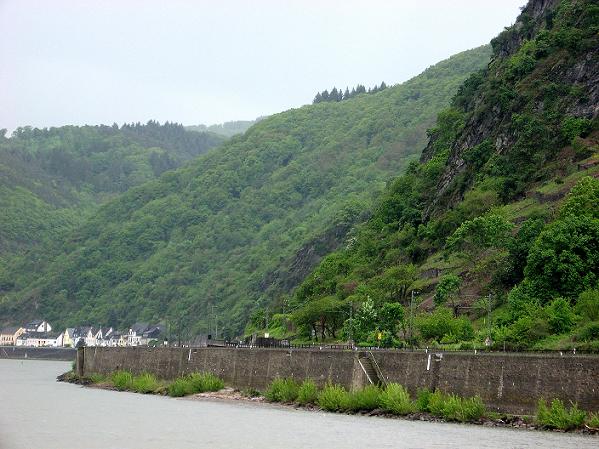 Amnis viridissime ripas
When the sky lit up a bit one could see how green those mountains are, covered with woods and vineyards. A 'river of the greenest shores' indeed, even though Ausonius said that about the Moselle. I remembered his poem I came to know when I visited Trier at the Moselle back in 2006.

I wonder if any Roman ever waxed poetic about the Rhine. It was mostly a frontier for them, and an unruly one at that. 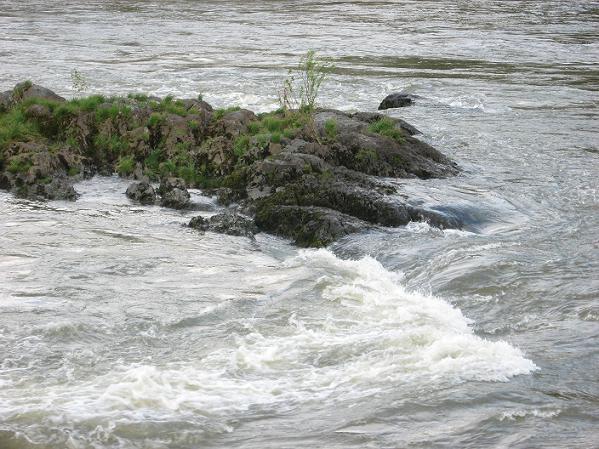 Shoals and currents
I mentioned that the most dangerous rocks have been blasted and currents diverted, like the (in)famous Binger Loch, but there are still a few left outside the fairway. I would not recommend to cross the Rhine by swimming, and not only because of all the ships. There are whirls that can suck you in and you'll find yourself on the ground, playing with the Daughters of the Rhine to Wagner's music. 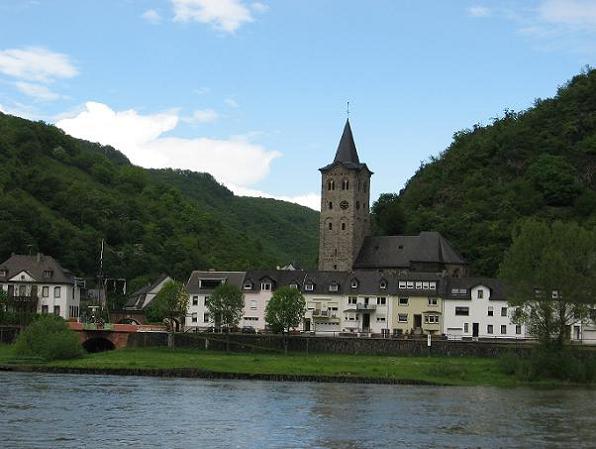 A glimpse of sunshine
That's how the tour may look on sunny days. Though there's a flip side to it; I'm sure the ship would have been full of tourists.

The mountains along the Rhine are littered with castles; some genuinely old ones, but most of them have been altered in the 18th and 19th centuries, and a few even built only then. They look more like Victorian (now with Extra! turrets and oriels) versions than Medieaval German castles. But I took a series of photos from the ship, so there will be a castle post. 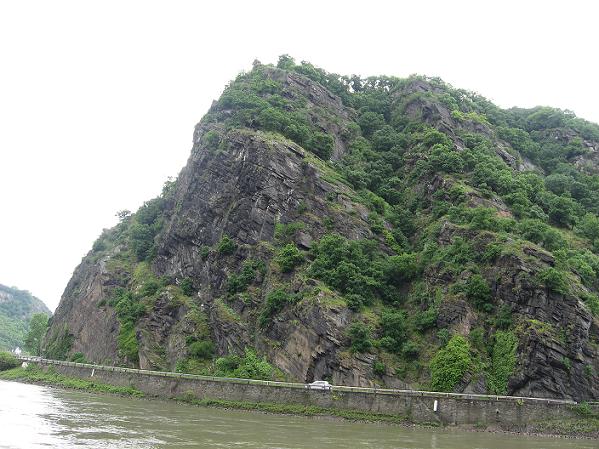 Lorelei
The bend in the river here was one of the dangerous spots of old. And not only that; there sat a beautiful maid on the top of that mountain, combing her long, blond hair and singing enticing songs, so the sailors would only look up to her and not care about the right course, and they'd end up in the currents and whorls and drown together with their boats. The maid is called Lorelei and can still be spotted sometimes today. Though obviously not during bad weather. There's a song about the legend that was played on the ship as it passed. Safely. 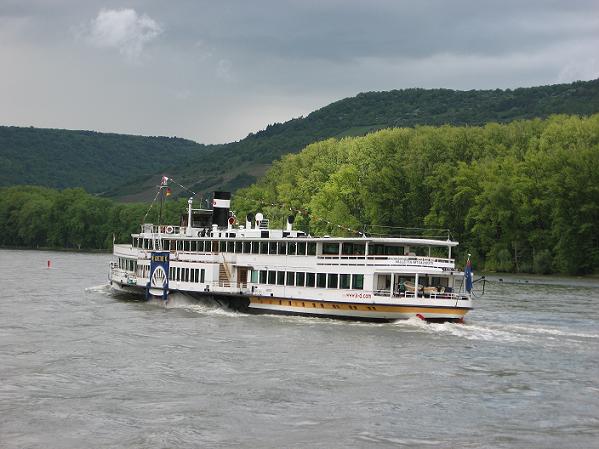 A paddle steamer
Most of the ships of the fleets that offer Rhine cruises are modern, but there are also more nostalgic ones around, like this paddle steamer. Not quite the Mississippi tour, but still nice. Some of the larger ships offer cabins for a longer journey, including a luxury variant with lots of gold, mahoganny, and velvet. 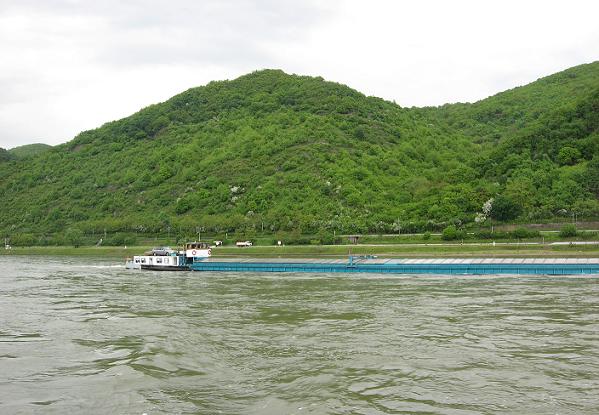 Another transport barge
I didn't catch the entire barge, there are some metres missing at the bow. Except for the cabin part, they are very low profile though sometimes the cargo is higher than the railing, with the covers remaining open. 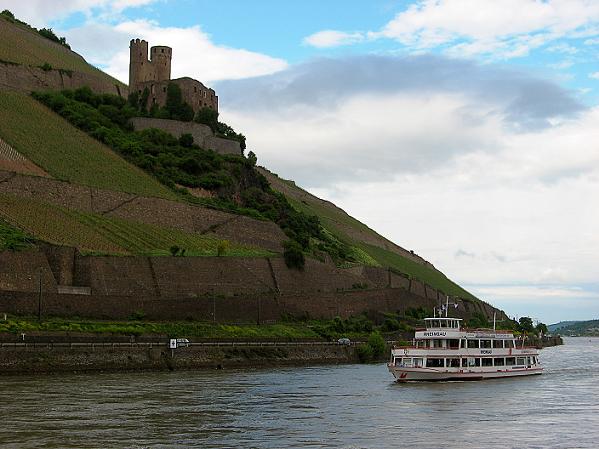 Another cruise ship
Another of the cruise ships going downstream. In the background is one of the many castles along the Rhine, Ehrenfels, framed by vineyards. There's even a bit of blue sky. In a way, it's the archetypical Rhine picture.  ¶ May 26, 2010

Comments:
It looks wonderfully green and romantic, and the dark ominous clouds just add to the drama. Great photos.

Maybe some Romans were attracted to the landscape because it was a dangerous frontier and because it was 'other' and inhabited by strange and alien peoples. A little like the British and French writers who romanticised the desert, maybe?

Well, Ausonius certainly liked the green, something that is probably more rare in most of Italy in summer, but he wrote at a time when nearby Trier had become a provincial capital and pretty Roman.

It could be that some soldiers got used to living in an 'alien' country; a good number of veterans would take land in the agri decumantes near the Rhine, for one because they got more land for their retirement money than they'd have been able to purchase in Italy. But I think they also had created a life for themselves, had children with local women, friends, got used to the weather and the local food and all that, esp. if they had been stationed at the Rhine for a longer time. It was pretty much the same along the Hadrian's Wall.

Stag, you can find both here easily. :)

Less romantic than Ausonius, but on the recurring theme of blood and water is this quote from Sextus Propertius

There's unfortunately some truth to it.

I'm doing some catch up here, but the post and the photos bring back my old memories of taking a tour down the Rhine. The boats are more modern than the ones I saw in 1970. However, the buildings and scenery have remained basically the same. wonderful.