22 Sept 2010
Baudobriga - A 4th Century Roman Fort
Today the place is called Boppard, one of the charming little towns that nest on the flat stripe between mountains and river in the Middle Rhine Valley. There had been a Celtic settlement not far from the modern town when Caesar conquered Gaul and reached the Rhine in 55 BC. The Roman settlement - a vicus - dates to the time of the Emperor Claudius (41-54 AD) who consolidated the road network and built additional forts at the Rhine. 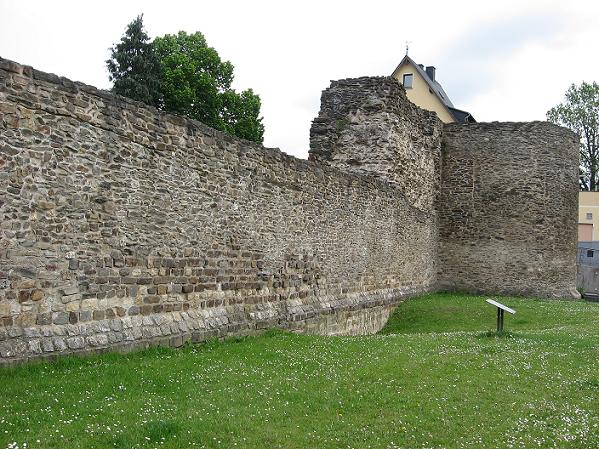 Remains of the 4th century Roman wall in Boppard

The settlement is mentioned in several sources in the 2nd and 3rd centuries (fe. in the Tabula Peutingeriana, a Medieaval copy of a Roman map). During that time the Limes ran somewhat north-west of the Rhine in this area and added a greater feeling of security to the settlements bordering the river. The Limes extended deeper into Germania further south-east, near Wiesbaden, and then along the Taunus and Odenwald forests down to the Danube. During that time, Baudobriga probably was a peaceful community that benefitted from the trade on the Rhine and the Roman road along it, as well as the connection to the hinterland in Gaul. Most of the buildings were half timbered houses with stone foundations and cellars. 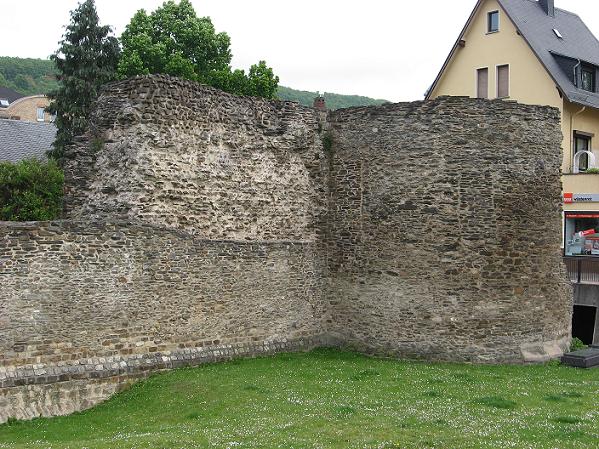 Roman wall and remains of a tower
But in 260 AD, the Limes was abandoned because of the increasing German incursions. Once they made it through the border fortifications, there was no way to stop those big bad Germans from getting deep into Roman territory until one of the legions could be alerted (and the nearest one was in Moguntiacum). In the long run, even the Rhine would not keep the Germans out, but the Romans didn't want to give up a province so easily (the agri decumantes between Rhine and Limes was another matter and less fraught politically).

The emperor Julian, after having dealt with two ursupers (Roman officers of German origins, to add insult to injury), fortified the Rhine line with a new set of forts in 355 AD, among them Baudobriga. The fort was built at some distance from the vicus but took the old name with it. 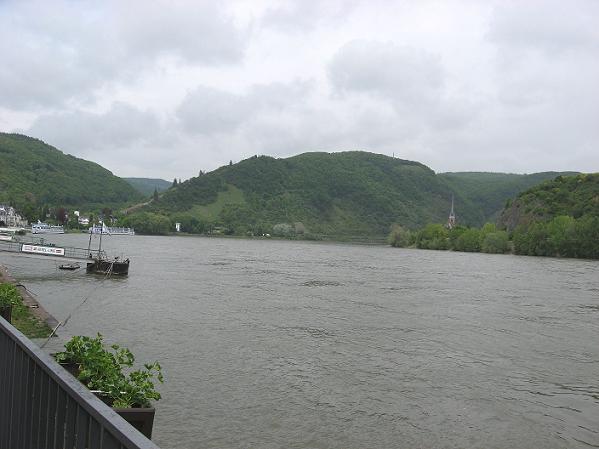 The Rhine at Boppard
In 406, the Roman troops were called back to protect Italy. The next time Boppard appears in the sources (634) it has become a Merovingian a royal seat and administration centre of the so-called Realm of Boppard (Bopparder Reich). Since no finds dating to past the time of the fort have been made in the place of the old vicus, one can assume that the settlement moved closer to the fort and occupied the fort itself after it had been abandoned by the garrison. 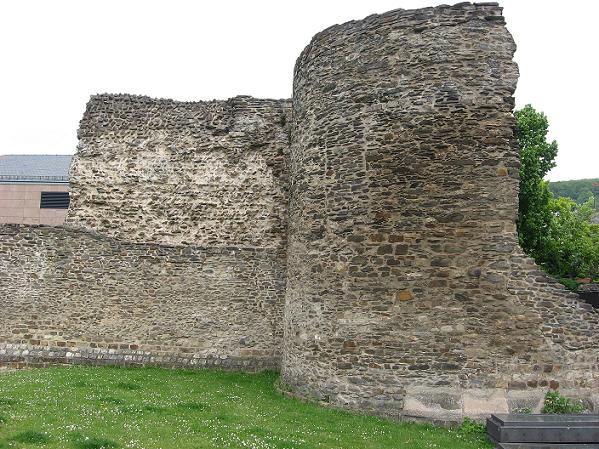 Another shot of wall and tower
Boppard has the best preserved Roman fortress walls in Germany. A section of 55 metres of the fortress walls is still visible today, rising up to impressive 9 metres. The fort walls once enclosed a space of 308 x 154 metres (4.6 hectares). The walls had 28 towers of a horseshoe floor plan with the round part jutting outside the walls, and at least two gates on the road that runs along the Rhine and right through the fort (it's still the main road of the old town today), though one can assume there were gates on the north and south sides as well. What remains of the wall today is the kernel of concrete and stone mix, the outer stones have disappeared, as usual. The walls were 3 metres deep and additionaly secured by trenches, except on the river side where the wall was only 2 metres deep and had no trench. 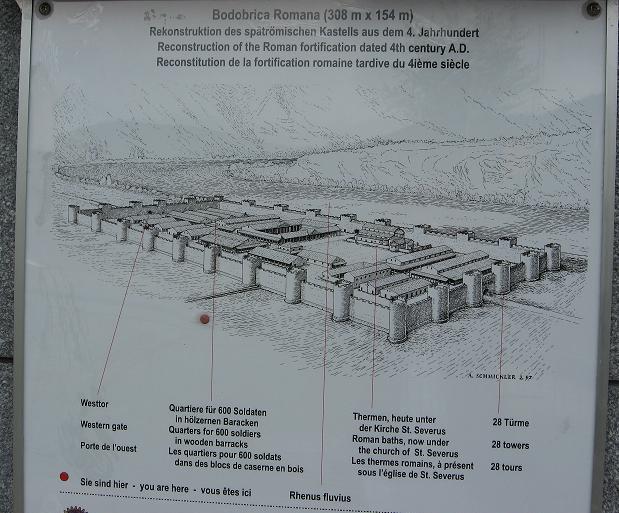 Sketch of the fort layout
Since the fort has been inhabited continually, little is known about the interior buildings during Roman times. The model sketch shows the usual barracks, granaries and a principia - Roman forts followed a pattern and it's not difficult to guess what goes where, but the 4th century fortresses were slightly different. For example, this one had the baths inside the fortifications.

The baths were discovered during renovation work on St.Severus Church in the 1960ies, together with an early Christian church from the 6th century. 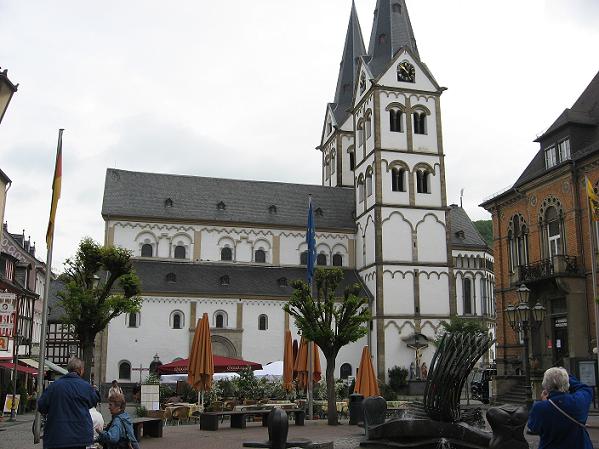 St.Severus Church
The northern fort wall was integrated into the bath building; it formed one side of the basilica or training hall. The baths encompassed an area of 50 x 35 metres. Some time after the fort was abandoned by the garrison, the civilians cut down the wall between the basilica and the apsidal-shaped adjacent room and by that got a one nave church with a choir apsis that had a floor level slightly higher than the nave. Four rooms on the south side once belonging to the baths, may have been used as sacristy and for storage. The fort wall continued to be one of the walls of the church.

An interesting feature of the 6th century church was a keyhole shaped ambo, an elevated platform from which the gospel was read. It extended from the choir into the nave. The feature disappeared from the Western churches to be replaced by the pulpit, but it's common in Eastern churches. 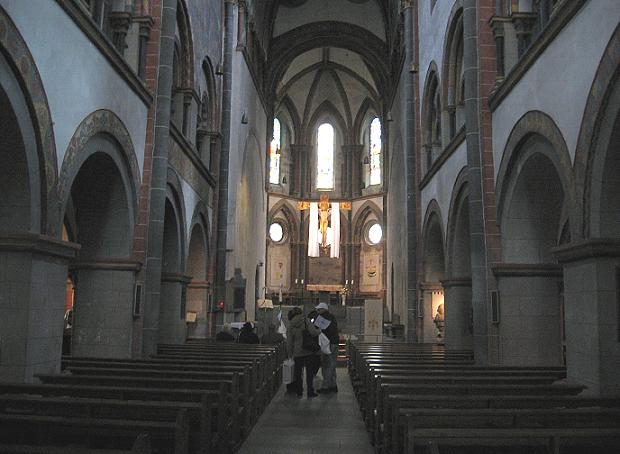 St.Severus Church, interior
A new church was built in the 8th century, and another one in the 12/13th centuries; that is the one we can see today. I don't know if remains of the fort wall can still be found in the wall that separates the naves of the Romanesque church but it's possible. Old floor plans often were expanded but not entirely abandoned when new churches were built in the place of older ones. There are remains of a Roman wall in the cathedral in Trier, for example. 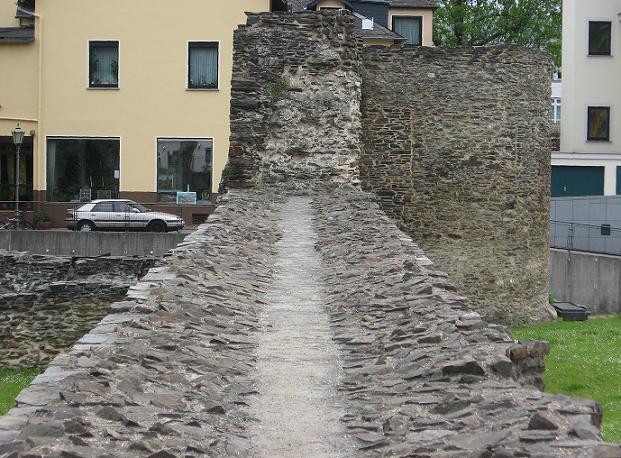 A walk on the wall
The excavations of the bath foundations were documented in photos (there is a fine example of remains of a hypocaust heating and the tubuli that heated the walls), but the floor had to be closed up again because the St.Severus Church is still in use. The past is hiding under our feet - the street level of Baudobriga was lower than the one of Boppard. But where some walls remain, you can still stand in awe of the massive fortifications and grand halls the Romans built. No wonder they inspired later architects.  ¶ September 22, 2010

Comments:
I love that church! I've been through Boppard, ages ago, but we didn't have time to stop and look around. Looks like I missed a heck of a lot. :-(

Really interesting post, Gabrielle. The scale of the defences shows just how tough a job they had holding the frontier lands. It's made me hanker to read Eagle in the Snow again

Those are very impressive walls! Thank you for posting.
What does the name Baudobriga mean?

Kathryn, it's a pretty church. Next time you better stop in Boppard - the important sites (Roman wall, St.Severus, another church, the market square with some pretty houses) are all close to each other.

Doug, yes it really got bad in 4th century. The German tribes merged into larger groups, there was the migration pressure from the east, and the Roman army was stretched out along too many borders. Add to that the inner troubles and the increasing amount of - not always reliable - mercenaries in the army, and you get a mess. :) Heh, I should reread Eagle in the Snow myself.

Carla, the name is Celtic but I don't know what it means. It's not mentioned in the booklet and websites about (Roman) Boppard.

Yet another fascinating post :) It's interesting how people always make the most of abandoned buildings - either recycling the stonework or the buildings themselves- in this case actually including the walls in the church.

Because I'm cursed with curiosity I just had to look - according to Adrian Room's "Placenames of the World ", "Baudobriga" means 'Bouduos's fortified place", but who Bouduos was I can't tell you!

Bouduos probably was the name of some Celtic prince / warlord then. At least the name sounds more Celtic than Germanic, and the majority of the tribes on that side of the Rhine were Celtic (albeit not all of them; the Treveri at the Moselle were a mixed Celto-Germanic one, for example).

I've just come across an alternative meaning for Baudobriga. As it's also possible that there was a Celtic chieftain named Bouduos whose name derived from the Gallic word for victory, and hills naturally lent themselves to becoming fortified places, I guess AdrIan Room's version may not necessarily be wrong.

There are some Celtic burial mounds on the hills above Boppard and the Hunsrück Forest. One of those has been excavated in the 1930ies and brought to light some pretty Celtic shinies (bracelets, rings and such) and a Celtic chariot that are now in a museum in Berlin. Whoever was buried there must have been a chieftain or prince.

There is an ancient road over the Hunsrück hills, and there were settlements as well, but oddly, no fortified Celtic seat of a chieftain like we find in southern Germany, though there were some rich leaders around.

The first Roman settlement with the name of Baudobriga was situated in the niche that's formed by the valley between the hills in the background of this pic. Since there were ways that connected the high road with the river, it's possible there already was a Celtic settlement on the shore, but the name can also have been derived from a hill settlement.

Hill of Victory - well, two rival Celtic chieftains at war and one won? :) Could well be. The problem is we know so little about the Celts pre-Caesar, except for their cultur represented in burials.

That was interesting. Thanks for including the sketch, helps me visualize. Love the photo from atop the wall, does my little engineer heart good. :)

We do know much more about the Celts post-Caesar, but of course, thanks to Caesar's operations, there were a lot less of them to know about! I've seen numbers mentioned (not sure how accurate) like one million Celts killed and another million injured and enslaved following Caesar's campaigns.

Excellent post and information. I wish I'd been able to spend more time there. I got a few photos of the town, though they're perhaps not as interesting as yours:

I have been in Boppard this year...I wish I had known this information before...thank you very much, quite interesting!