2 Sept 2010
Where the Roman Stones Went
Some of them at least. The abandoned Colonia Ulpia Traiana served as quarry for the new town that developed near it. Obviously there were still some good stones left in the 16th century which made it into the walls of this beautiful house. 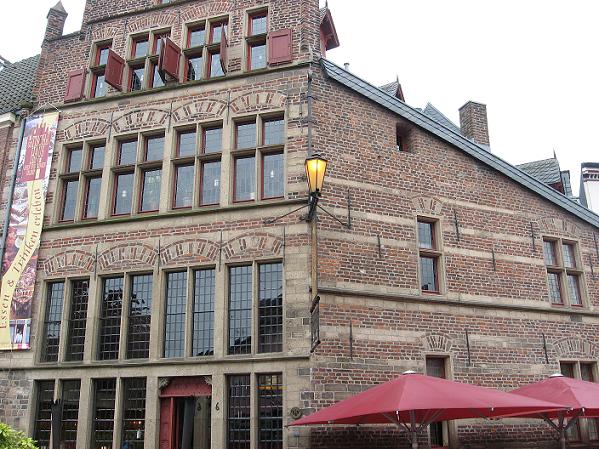 The Gothic House in Xanten

The Gothic House (Gotisches Haus) is one of several old houses in Xanten that have survived, and surely the most impressive of them. The red brick stones are a local product, but the the greyish tuff stone has been identified as Roman. 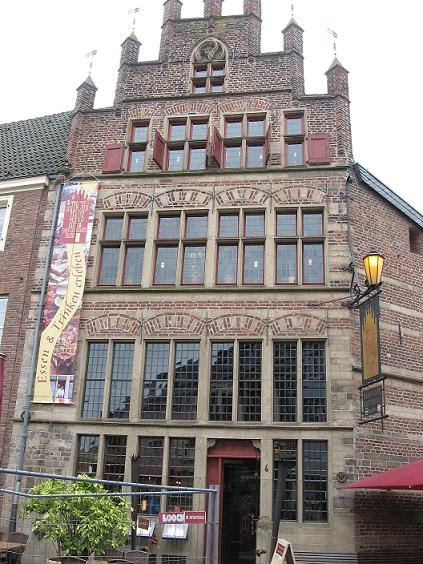 The 'show side' facing the market square presents a fine crow stepped gable - those decorated gables were a way to display your wealth in the late Middle Ages. Another show off are the large windows. Of course, they are modern windows now - the 16th century would have had crown glass windows - but the sizes are the original ones which meant lot of glass, and glass was expensive. You can see that most of the grey tuff stones have been worked into the front side as well becasue they, too, were considered more valuable than bricks. I wonder if the rights of using the CUT remains as quarry were limited to certain groups of people, like the Church and wealthy citizens.

Not only the walls, but also the timber girders and beams as well as the roof construction inside the building are the original ones. The timber can be dated to 1540, but else I could not find much information about the builder, a wealthy merchant, and later owners of the house.

The Gothic House hosts a nice, atmospheric café and restaurant today, which is the reason I didn't take any photos of the interior. I felt it would have been bad style to move around and take pics, thereby disturbing the other guests. The rooms have been restored according to old plans so the interior layout is more or less 16th century (except for the kitchen, I suppose *grin*).  ¶ September 02, 2010

Comments:
What a resource we have in you!

That is amazing - stones from Roman buildings incorporated into a house from the 16th century. I wonder how many other houses from that era did that? and how many times I've walked past them?

Anerje, it happened a lot. That's the reason so few remains of Roman buildings are left, not that they crumbled (they didn't). There are stones from the Hadrian's Wall in the abbey church in Hexham in and no one know how many old farm houses in the area, the stone seats of the arena in Trier made it into a church there, the cathedral in Worms was built over the forum basilica and some Roman stones made it through all the renovations and rebuildings - to name just some examples. The same thing happened pretty much everywhere the Romans erected stone buildings. When things survive, like the Constantine Basilica in Trier, then because they were actally in use post-Roman times (it became a church).

The other way how remains vanish is by a rise of the surface level over time. Places like York or Mainz are 50-100 cm above the Roman street level. They found the remains of an Isis temple in Mainz when they dug the cellar for a shopping mall.

Very handsome building. Is it possible to tell whether the Roman stones had been previously used in an earlier post-Roman building before finding their way into this house?

Wow, what a neat looking building. Can't blame our ancestors for recycling now, can we? :)

Carla, I could not find much information about the house but it's well possible the Roman stones had been used in other buildings previously.

Constance, yeah, but it would still be nice to find some more intact Roman buildings. ;)

Quite coincidentally I read just today that Siegfried (of Nibelungenlief fame) came from Xanten. He has a fascinating link with the Roman fort: A converted Roman soldier had been executed on the Calvary Hill around which the present town grew. The soldier's Christian name is St Victor (Sieg) and as a converted soldier he advocated peace (Fried). So claims a letter in the TLS dd 9 July 2010 [I'm always behind in my reading of the TLS].
All good wishes, Judith

Thank you, Judith. I mentioned that Siegfried is from Xanten in an earlier post, but the connection between him and St.Victor is new to me.

Makes more sense than the 'Siegfried is Arminius' these that's been spread on TV here.