12 Oct 2010
Yet More Castles and Churches
Because we have plenty of both and you keep saying you aren't getting tired of them. So here we go with a fresh batch (only the short version for today).

I found the castles in the south-eastern Harz foothills in ex-East Germany. Castle touring is healthy because the parking lots are always at the bottom of the mountain and you'll have to hike up to the summit where some count or lord built the thing. 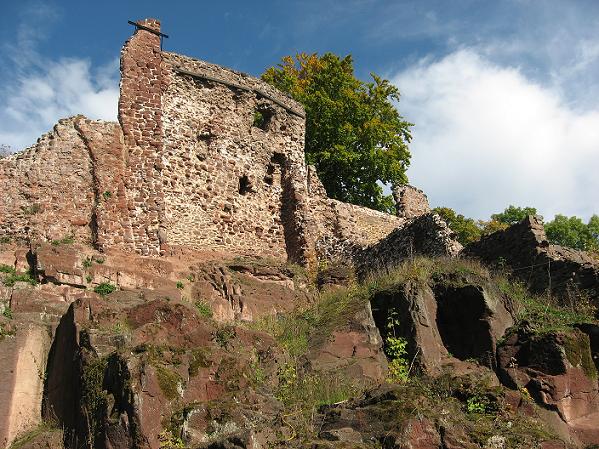 Hohnstein Castle, the palas building on a rock

Hohnstein Castle dates back to about 1120, assumeldy founded by Count Konrad of Sangershausen, nephew of the Landgrave of Thuringia. Konrad's heirs increased their influence in the southern Harz area, acquiring more and more land. Hohnstein became their main seat. But divided heritages split the Hohnstein family into several branches and led to a decline in power. Like most Medieaval (and modern) families, they started quarreling among each other, with Hohnstein Castle being the target. It was conquered in 1412 and fell to an ally outside the Hohnstein family. 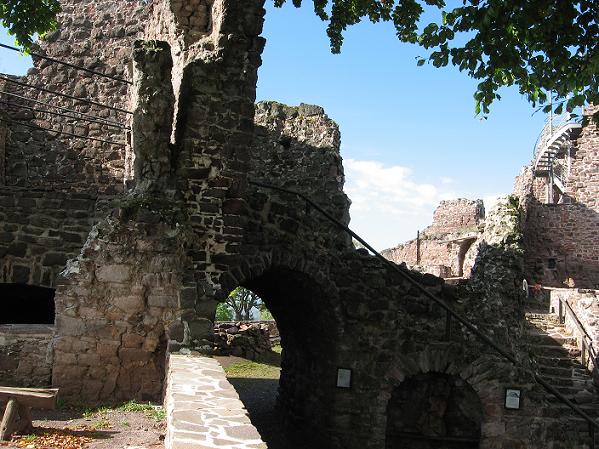 A veritable maze - remains of Hohnstein Castle
The Hohnstein family died out in 1593 and the castle came to the Count of Stolberg who modernised the defenses and rebuilt the main palas in the Renaissance style. At that time Hohnstein was one of the largest castles in the Harz. Like so many castles it suffered during the Thirty Years War and other wars and was left as a ruin. After the reunion, the remains have been repaired so it's safe to visit the castle today.

The pretty red colour is caused by the porphyry used in building the castle. The rocks beneath it are porphyry as well. The next castle just a few miles from Hohnstein used the same sort of stone. 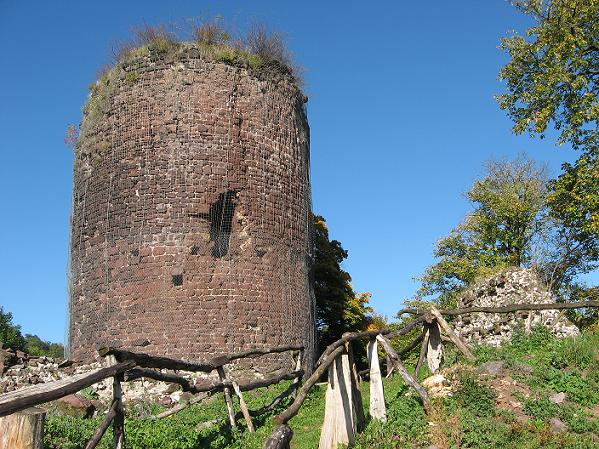 Castle Ebersburg, the keep
The Ebersburg was built by Hermann I Landgrave of Thuringia between 1180 - 1191. There was a time of splendour in the late 12th / early 13th century, but in the following centuries the castle saw different owners, several times as result of a feud, until the Ebersburg fell into decline in the 16th century. The remains are upkept by the Society for 'lebendiges Mittelalter' (a German variant of the SCA) but there's a lot of work to be done to prevent the ruins from detoriating further - the keep is impressive but tries to imitate the Tower of Pisa. 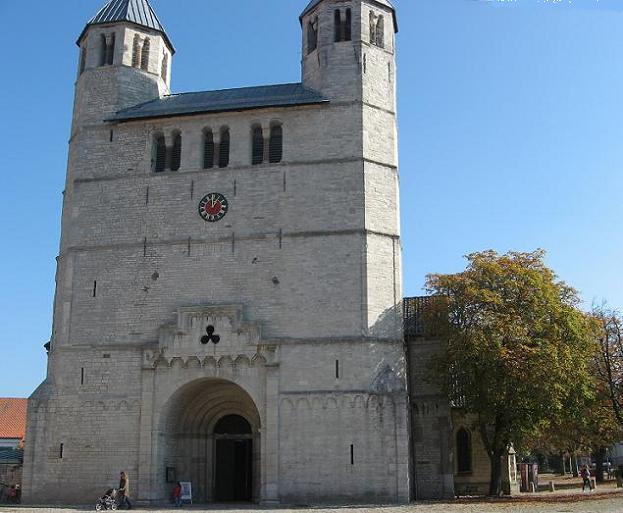 Chapter Church Bad Gandersheim, the westwork
The Chapter of Gandersheim, a town in the Leine valley on the western side of the Harz, was founded by the Saxon duke Liudolf in 852. It soon developed into an important institution, first as family chapter of the Liudolfing family; since the 13th century as 'free chapter of the realm'. Gandersheim became an important town and was frequently visited by the emperors of the Ottonian and Salian dynasties. 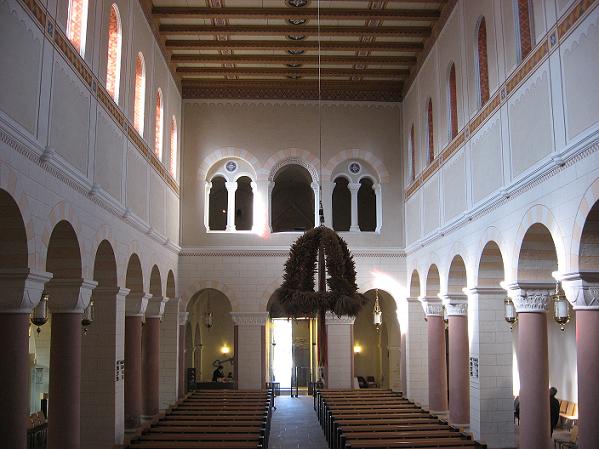 Chapter Church, view to the abbess' lodge in the westwork
The church is pure Romanesque style (except for the Gothic annexes along the outside of the naves), dating to 1100 - 1168 when it was consecrated. It's a basilica with transepts and a single apse at the eastern end. The so-called Sächsischer Stützenwechsel (Saxon alternating support - one column, two pillars) separates the naves; the main nave has a flat ceiling, the side naves a cross grain vault. The most impressive feature is the westwork with its two towers and the connecting two storey block. 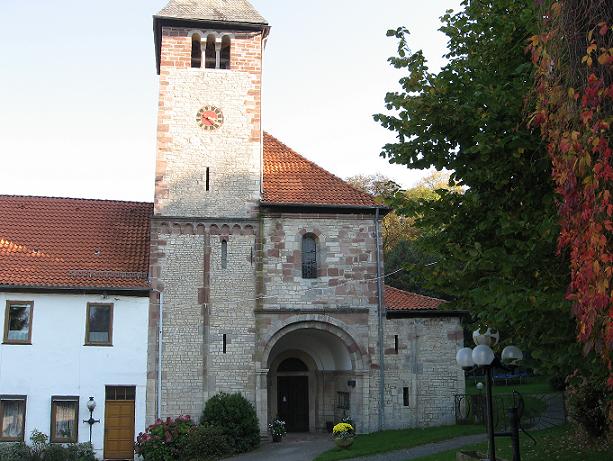 Romanesque church in Clus
The monastery in Clus is the little brother of the church in Gandersheim, founded by the Gandersheim abbess Agnes, a niece of the Emperor Heinrich IV. The church is mostly Romanesque as well (1127 - 1159), except for the Gothic choir from 1485. The westwork lost its southern tower which had been in bad repair. The monastery was abandoned during the reformation in 1596; the buildings that once belonged to the monastery today house a pony farm. 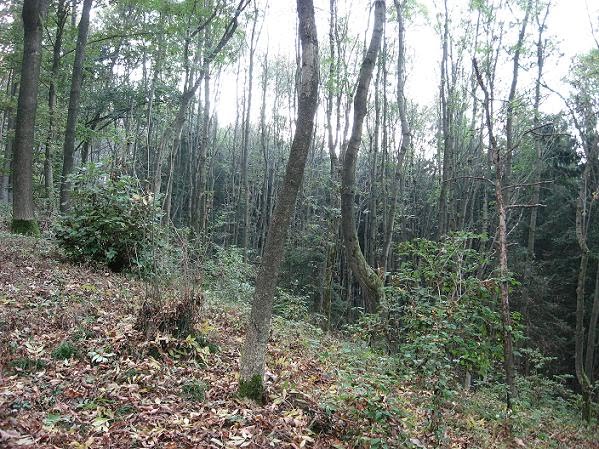 Forest at the Harzhorn
On the way back we made a little detour to the Harzhorn near Kalefeld where the 3rd century Roman battlefield is located. You can't see much without a guided tour because the archaeologists try to cover their traces due to the problems with illegal diggers. So it was more a nice walk along the slope the Romans tried to climb while the Germans shot pointy things from above. What got stuck in the soft earth of the slope were the Roman pointy things, though. So far about 1800 pieces have been found (weapons, coins, a horse skeleton and more). I'll get back to that one.  ¶ October 12, 2010

Comments:
Hey Gabriele,
I was wondering if you were interested in doing a small NaNo-inspired run with us again this year? Details are here: http://www.jeritalleedawson.com/blog/?p=1260
Would love to see you there! Newcomers welcome!
Jeri

in my opinion, you can never really have enough Castles and Churches.. or unique stone based architectural constructions in general.

Gabrielle, I actually found a copy of The Bastard Prince! Do you still need a copy? Let me know and I'll send it to you.

That's good to hear, Lagomorph Rex. ;) Because you will find plenty of those here.

Ann, you're still hunting for that book? That's extremely kind of you, but I found a set of French translations of the Camber novels some time ago. Dunno why the English ones are no longer in print when the French are. Publishing is weird, sometimes.

The chapter sounds almost like a sort of exclusive boarding school. Did it develop from a religious order?

If I remember right, Gandersheim was founded as a Benedictine nunnery, but wasn't very strongly ascetic and so was relaxed into a canonry before very long. It was quite old-fashioned in a way, in as much it was largely a holding pen and finishing school for noble daughters. None of which stopped it being a fairly serious intellectual environment, as the name Hrotsvitha will testify.

I haven't looked any of this up, am going purely from memory and now expect Gabriele to come along and correct me :-)

It's yours if you change your mind. :)

BTW, did you get my question via e-mail? If not, I'll send it some other way.

Kathryn, yes it's a big castle and enough of it remains to give you a good image of its size.

Carla, exclusive boarding school is a good description. It took the religious orders as example, but never was one itself. Though I suppose the dfference between nuns and canonesses in the Middle Ages was not so great, with religious feelings being so strong and all-encompassing.

Jonathan, the chapter never was a nunnery, but it was first housed in nearby Brunshausen which after the move of the ladies to Gandersheim became a genuine Benedictine nunnery and later a monastery (there was a second nunnery in Clus). Yes, nunnteries and womens' chapters could become centres of learning as well as any monastery, and the climate in Gandersheim in particular seems to have been very intellectual. Abbesses could hold considerable political influence, and so did some queens.

Lay, oops, I had to fish that out of my overimaginative spam folder. :) Can't come up with anything right now; I need to get the grey matter working a bit.

OK. No need to hurry. Seems like I'm not going to get to the ending (where I need the phrase) that quickly anyway, and there are several other people I'm poking so chances are good that one of them is going to find something before I finish the story.