23 Feb 2011
Chapter Church Fredelsloh - Another Romanesque Church at the Weser
After all those Roman posts, it's time for some Romanesque architecture again and I got a pretty church in spring sunshine for you.

Fredelsloh is a village not far from Göttingen. There had been an important chapter in the Middle Ages, belonging to the famous Weser abbeys I have mentioned several times. Fredelsloh isn't situated directly at the river like the other abbeys and chapters but it belongs in the same historical context.

Like Lippoldsberg Abbey, Fredelsloh was founded by an archbishop of Mainz, Adalbert I, in 1132. The abbey lies in the north-western outskirts of the fomer archdiocese and was intended as chapter following the Augustine rules. Fredelsloh gained importance very fast thanks to donations and privileges from popes, emperors and great feudal lords. Soon (I could not find an exact date) a ladies' chapter was added and some 150 people would meet during the liturgy of hours. 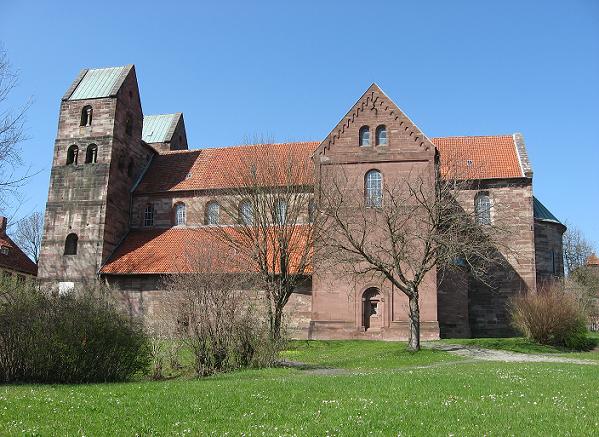 The Romanesque church in Fredelsloh, seen from the south

The counts of Dassel acted as reeves of the abbey (until 1322 when the family died out in the male line). During the feud between Welfen and Staufen, Fredelsloh managed to play both parties and get the best out of the situation. The provost Bertram was liege of the archbishop of Mainz who sided with the Welfen, while one of the chapter members, Johannes of Dassel, supported the Staufen. I'd have liked to sit in at the chapter meetings during the years of the fallout between Friedrich Barbarossa and Heinrich the Lion. I can imagine they were quite lively.

But Fredelsloh lost its importance as pawn after Duke Heinrich's exile, and material support ceased. Since the ground was clay and didn't support much agriculture, the abbey had problems to keep up its standard on a self supporting level, and the men left the chapter. The canonesses took to trading the pottery made of the clay (pottery is still done in Fredelsloh).

The Welfen family managed to rise again after the fall of Heinrich and the unhappy emperorship of his son Otto and regained much of its former lands, among them the grounds around the Weser on which Fredelsloh is situated. But the abbey had declined to a minor provincial monastery in the 14th century. 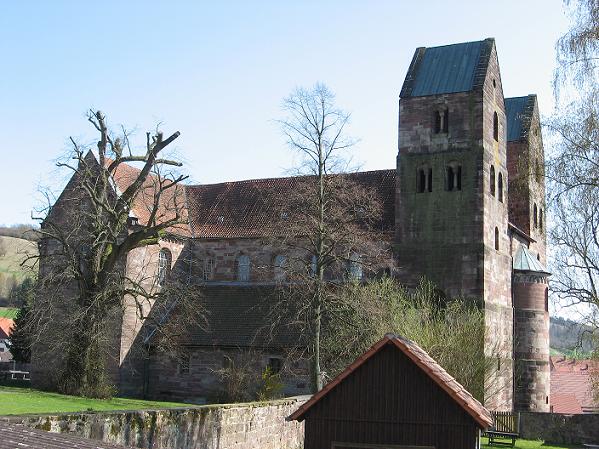 The church seen from the north
A big fire in 1290 destroyed most of the convent buildings and damaged the church. The pope gave some money for repair but not all buildings seem to have been reerected. Two years later a murder happened in the monastery but due to lack of a Cadfael it was never solved. Though the provost paid the relatives of the victim a lot of money (some sort of weregild). To keep them silent?

The Lutherian Reformation was introduced in Fredelsloh in 1542. Duchess Elisabeth of Calenberg-Göttingen sent Antonius Corvinus to the canonesses who told him they were fine with the Reformation but he should please, not introduce too many new rules because they were old and could not cope. A Reformation Lite, so to speak. But somehow the chapter still managed to hold on until 1652 when the last canoness left the place.

The church served as granary for several generations and survived while the other buildings fell into ruins. Today the church and land belong to the Klosterkammer Hannover which paid for a renovation of the church that restored the Romanesque layout and interior (1968-73). It's used as parish church. 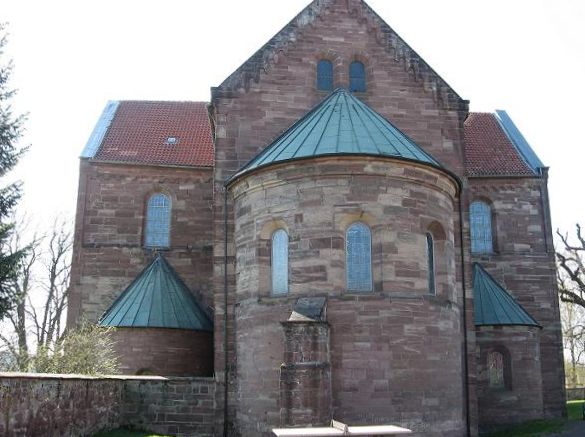 The choir from the outside
The St.Blasius and Mary Church in Fredelsloh is an example of pure 12th century Romanesque architecture. The floor plan is cross shaped with a main nave and two side naves, transepts, a three-apsidal choir on the east side and a westwork with two towers. The main nave has double the width and height of the side naves which are also lower, which makes the church a basilica.

The decoration is very sparse, nothing like most of the Romanseque cathedrals at the Rhine (for example Mainz). There's a plinth running along the foundatins and tiny blind arcades directly under the roof - you can see them best on the apsis of the westwork (photo below). But this austere style is typical for several of the Weser abbeys; Lippoldsberg fe. has even less decorative elements on the exterior. 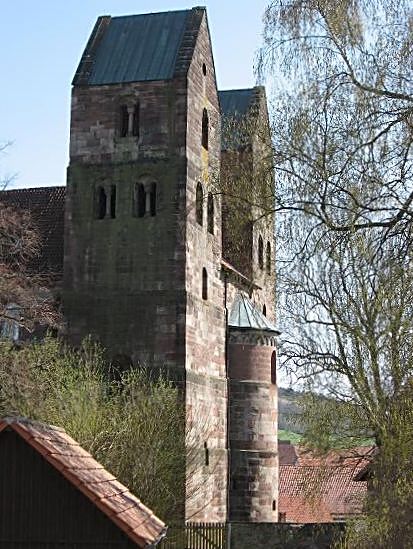 I already mentioned that Fredelsloh Abbey was a mixed chapter for both men and women. Of course, the genders needed to be kept apart and that included not only separate living quarters but also two different entrances to the church because services and the liturgy of the hours would be held together. The men entered the church by the south gate (their living quarters were south of the church).

The canonesses' quarters lay to the west, and they got a separate entrance from the westwork. The architect added a tower with a winding staircase and a small gate at the bottom so the ladies could access the nuns' quire on the second floor of the westwork. From the outside the tower is visible as apsis. Another cool aspect is the double row of steps around the spindle; the space between them was said to have been used as hiding place for valuables. The entire feature is unique for Fredelsloh..

The matroneum of the westwork has three storeys with an arcade system that narrowed in relation of 4:3:2; the nuns' quire took up the middle storey while the uppermost one was a 'blind' storey only serving to increase the impression of harmony. Most other Saxon westworks only have two galleries.

Unfortunately, this part of the church can only be seen from the outside today because there had been problems with the statics (sinking ground) and an additional wall that distributed the pressure away from the pillars of the main nave had to be erected about 200 years ago. Nowadays the eastern part of the church is sufficiently large for the parish and the interior of the westwork is locked off for visitors. It's also the reason I took few photos of the interior; that wall kept getting in the way. 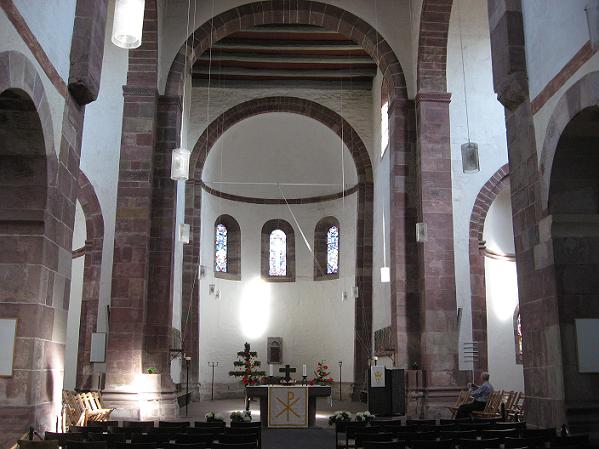 Interior with view to the choir
The defining feature of Romanesque architecture is symmetry. Starting point for a church was the crossing: its side length served as scale for the rest of the building. The whole building thus gives the impression of great harmony in contrast to the disorderly world outside the church, an antimony between the House of God and chaos as seen by people in the Middle Ages. Like the outside of the church, the interior was sparsely decorated as well.

The arcades separating the naves originally were supported by alternating columns and pillars (simple Stützenwechsel; the other version is the double or Lower Saxon one with one column and two pillars - it's interesting that it wasn't used here because geographically Fredelsloh belongs to the area where that was the fashion) but after the fire in 1290, the columns were replaced with pillars

Comments:
This looks like a real mix of buildings to me - I wouldn't say it looks like a church actually from the outside. beautiful inside though.

Btw, I visited the Tower of London again last weekend - I can't keep away - and the Beefeater whose tour I went on spoke about how the White Tower has been cleaned - it does look much better. He said they had found some stone with Roman inscriptions on - thus showing he Normans used stones previously used under the Roman occupation. Re-cycling even then :>

Anerje, it's one building. Romanesque churches look like that. You got the westwork with the two towers, the naves (main nave in the middle, lower side naves), the transept wings, and the apsidal choirs on both the main and the side naves to the east. Some churches have an additonal tower over the crossing, usually shorter than the west towers, and late Romanesque / early Gothic chuches may also have towers on the east side.

I learned that layout as preschool kid from my late mother who was very interested in historical architecture. :)

I love Romanesque churches. A refreshing (if plain!) change from Gothic froth. :)

Wow, what an incredible place.

Lovely photographs. Especially the interior picture, with the plain lines and the contrast between the stonework and the white plaster.

"...they were fine with the Reformation but he should please, not introduce too many new rules because they were old and could not cope" That's rather sweet - I hope he complied with their request.

Constance, the 'Gothic froth' is a bit less decorated in Germany than the perpendicular style in the UK and France.

Thank you, Katrhyn and Carla.

Carla, the guidebook doesn't say anything about Corvinus' reaction, but yes, it is rather sweet.

That looks kike an interesting building.