24 Aug 2011
Fancy Some Cold Water? - The Lonau Fall near Herzberg / Harz
Well, I don't think my British readers fancy any more cold water than they already got, but we have some very hot days in Germany, and the heat wave in the US seems to be still strong. Since the litte trip I did last Saturday included a waterfall (besides a cave and limestone rock formations), I'll share some photos with you. 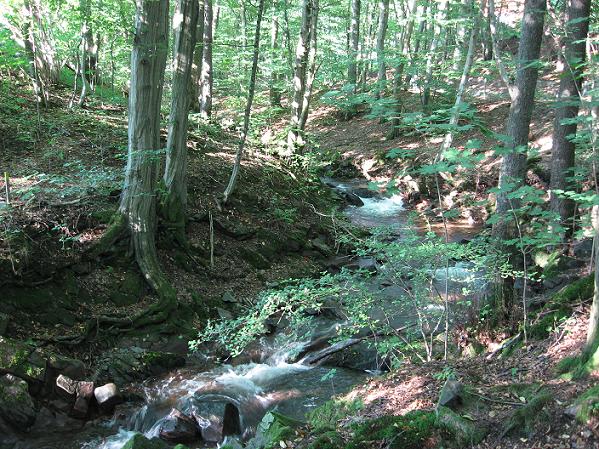 Lonau river in the forest

The Lonau Fall is the only natural waterfall in the western Harz and a nice view even in summer. I've seen when the snow in the Harz mountains had just melted, and during such periods it is truly impressive. But the summer pics are interesting, too.

The Lonau river cascades 10 metres down a narrow ravine to confluence with the Sieber river about 100 metres further south. The most prominent feature of the surrounding landscape is a hornbeam forest with some moss-grown greywacke boulders. 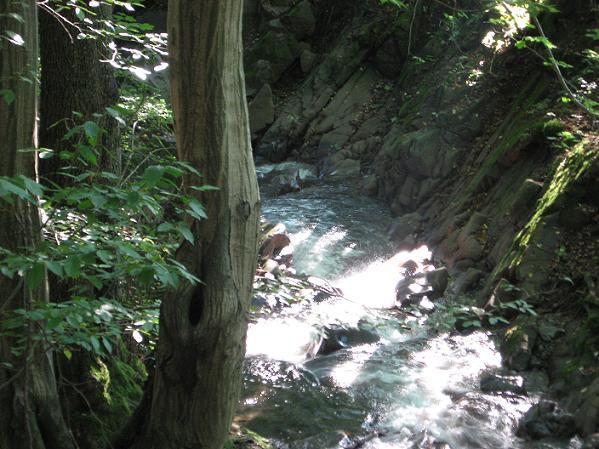 Foaming over stones
Waterfalls are a sign for a disruption in the relief of a river, and a good chance to study the geological history of a landscape. The time that interests us here is the quartenary ice age, the the last 500,000 years of our history. Yeah, this goes a bit further back than the Romans. Those millenia were defined by cycles of moderate, wet climates (like today) and dry, cold climates with permafrost, usually refered to as Ice Ages. Though the area in question was never covered by ice, therefore we speak about glacial periods or glaciations; the warmer times are called interglacials. The last glacial period ended 15,000 years ago. Today we live in an interglacial, the Holocene epoch.

The difference between greywacke and the softer limestone caused the beds of the rivers Lonau and Sieber to develop differently. The Lonau makes her way over the hard greywacke while the Sieber had to deal with the much softer limestone and over time carved its bed ten metres deep into the rock. Both rock layers meet at the Lonau waterfall.

Greywacke is a hard sandstone that developed during the Palaeozoic Era ( 542-251 million years ago). The clastic sedi-mentary rock is usually found - among other geological formations - at the bases of mountain areas that once had been deep sea ground. While greywacke is composed mostly of the eroded grains of other stones like quartz, feldspar (crystallised magma) and flint that baked together in a layer of clay and hardened over millenia, the limestone that also can be found in the area is a sedimentary rock composed of organic fragments like coral or foraminifera and thus also former sea ground.

Limestone is soluble to water, and over time the water and weak acids from the overlaying soil enlarged the cracks and fissures in the limestone by dissolving the calcium carbonate. The result is a karst landscape with oddly shaped rocks and caves (one such cave is not far from the Lonau Fall). Another feature of karst landscapes is the lack of visible groundwater, that is, there are no rivers and wells. The water drains through the soil into the porous stone until it meets a layer of hader rock - such water reservoirs may reappear several miles from the original source; the Rhume Springs is a good example for that (and not far from the Lonau/Sieber confluence). 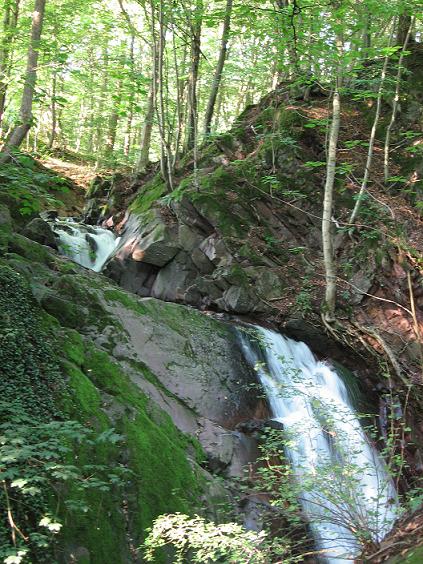 During every glacial, the rivers delved deeper into the bedrock, mostly by congelifraction: the water in rock fissures froze, thus expanded its volume and caused erosion. One can easly see how that would be a lot more efficient in limestone. During interglacials, the riverbeds partly refilled with gravel from higher regions, which in turn worked a bit like mortars.

Both rivers changed their course during the millenia. The Sieber moved closer to the Lonau and basically tapped her. One can still find a mix of Sieber and Lonau gravel in the middle terrace of the fall, dating to the Saale Glacial about 130,000 years ago. But the final touch, the further deepening of the Sieber riverbed and the waterfall with its cascades, developed during the last, the Weichsel Glacial, which ended 11,700 years ago.

The Lonau waterfall marks a geological border between the greywacke and the zechstein layer, another sedimentary rock. It can be found all the way from the east coast of England to Poland; the European Permian Basin or Zechstein Sea. The zechstein is the lowest layer of former Oceanic sediments in the Harz. It is harder than limestone but still easier to erode than greywacke.

The border between greywacke and limestone runs in such a way that the limestone extends into the Sieber valley like a tongue, but doesn't reach the Lonau which runs on the greywacke. That way the Sieber deepened its limestone bed and eroded the zechstein at the fringe of the mountains faster than the Lonau, increasing the difference in height to ten metres.

The ravine through which the Lonau gushes down was washed out of a softer black shale strata (another sea ground sedimentary rock with organic grains) within the greywacke. 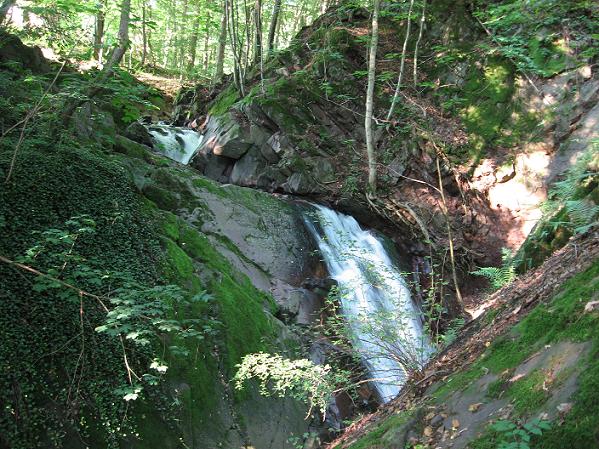 Second cascade, another view
The greywacke along the fall does not show its typical grey colour but a red tinge instead. This is caused by the so-called rotliegend (why are half of the geological terms German, lol?) a rock layer immediately below the zechstein along the borders of the Harz mountains. The colour is caused by iron that had been dissolved when the Zechstein Sea flooded the recently folded mountains 250 million years ago. 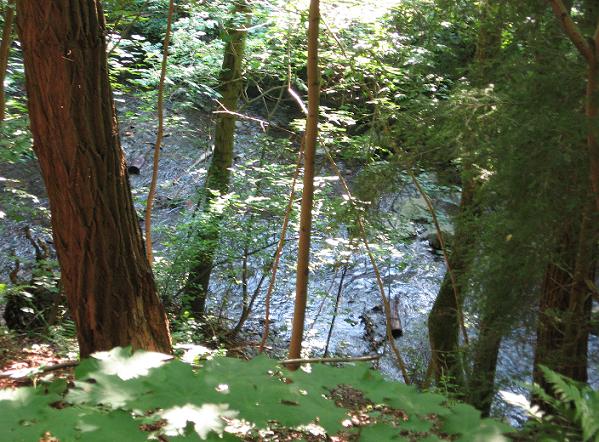 Lonau river past the falls
The Lonau fall marks the end of one of the most affluent drainage areas of the Harz. The surrounding mountains get about 1500 mm percipitation; the 70 km2 Sieber estuary has an annual average volumetric flow rate of 62 million m3 just before the fall (which makes 2 m3 every second), the Lonau estuary adds 10 miillion on 14 km2. There are great differences in the flow rate of the fall between summer and winter, from 0.04 m3 per second in June to 3.00 m3 in January.

I hope you enjoyed the little geology lesson. :)

Comments:
Beautiful pictures! Congrats on getting some summer:>

Wow! That was neat!

Your link has a lot of maps and charts.

Very informative! I learned a bunch. Pretty pictures too. :)

The two years of geology I took in high school were a great revelation. People have told me that the very stones in the earth talk to me. (a little knowledge IS a dangerous thing, but very exciting!)
It whets my appetite for more!

Louis Aggasiz spoke and wrote in German, and he was a very influential early geologist. He was in fact, the first to realize that the great glaciers in his native Switzerland created moraines which resembled moraines elsewhere. He was the first to suggest that ice ages existed.
http://en.wikipedia.org/wiki/Louis_Agassiz

His academic history is quite fascinating, and virtually a case study in cognitive dissonance...somehow reconciling creationism and polygenism with his ground breaking discoveries regarding the true age of the earth.
The great plains of the US and Canada used to be a shallow sea, named after Aggasiz. When that lake drained rather abruptly, (which it did three or four times) great waterfalls and deep canyons were carved into the landscape. Must have been exciting!

I like geology. It should have been a required course instead of an elective. However I fear the influential fundies don't like it much since it challenges their belief system, so it will remain elective.

Thank you, Anerje, Constance and Kathryn.

Hank, the site is run by some geology geeks. :)

Stag, you mean some people get scared by the idea that those stones are older than Creation? ;) I'm glad to live in Germany; at leas the fundies - the few we have - don't have a say when it comes to school subjects.

I did enjoy the geology lesson, thank you :-) Fascinating subject. If you walk in hills and mountains you can't help but wonder how they came to be there. I see Stag has already mentioned Agassiz - if you're interested in the early exploration of the Alps, including how some of the geology and glaciology was worked out, Killing Dragons by Fergus Fleming is worth a read.