20 Apr 2013
Book Tower
Fantasy author Mark Lawrence has asked the readers of his blog to post photos of book towers they created. Well, it sounded like a fun thing to do and so I started hauling Roman themed books, both fiction (easy) and non-fiction (not so easy - I've got some real monsters there; the boxed set of the 2009 Varus Exhibition catalogue weighs in at 6 kg), from the shelves in my flat and created this. 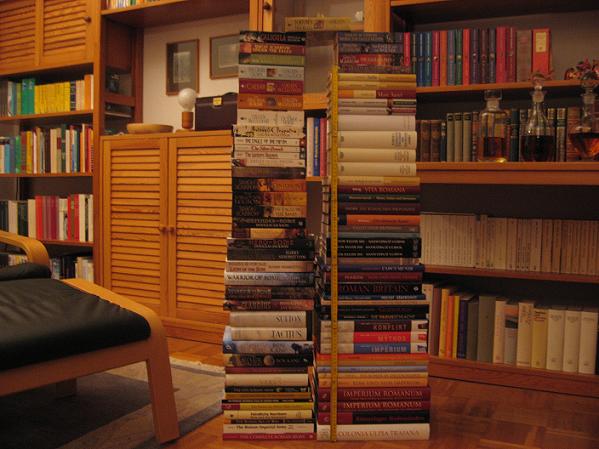 The twin towers of Roman books

Of course, after I had taken the photos and dismantled the tower, I remembered another shelf which held, among others, some German fiction about the Romans and my bilingual editions of Ovid and Vergil. Well, the whole thing looks pretty impressive anyway (the yardstick leaning against the tower shows 1 metre).

Comments:
Love your towers. I see I have a few of the same books as you. :) But not as many!

Gabriele, impressive inded! And, BTW, yo've got a very nice and cosy flat (judging by the fragment of the photo) :-) Twin towers! The construction worth the Roman engineers :-)

Kasia, yes, I think my flat is very cosy albeit a bit small for all those books I got. ;-)

Constance and Carla, and that's not counting the file folders full of essays about the Romans. And a Medieaval Tower would be even bigger, I suspect.