4 Jan 2015
Castle Plesse (Part 2) - The Lords of Plesse
I've mentioned in this post, that Bernhard of Höckelheim replaced Robert as Lord Commander of Castle Plesse in about 1150. At that time he must have held the castle as fief from the counts of Winzenburg - first from Hermann and after his death in 1152 from Hermann's nephew Otto (the son of his brother Heinrich of Assel). When Otto died without surviving offspring in 1170, the fief fell back to the bishop of Paderborn. It was then granted directly to Bernhard and his brother Gottschalk of Höckelheim. They are called 'edelfrei' which means they were of free men of noble birth and not ministeriales (1) and carried the title comes de Plesse (2) since 1183. Today they are known as Edelherrn von Plesse - Noble Lords of Plesse. 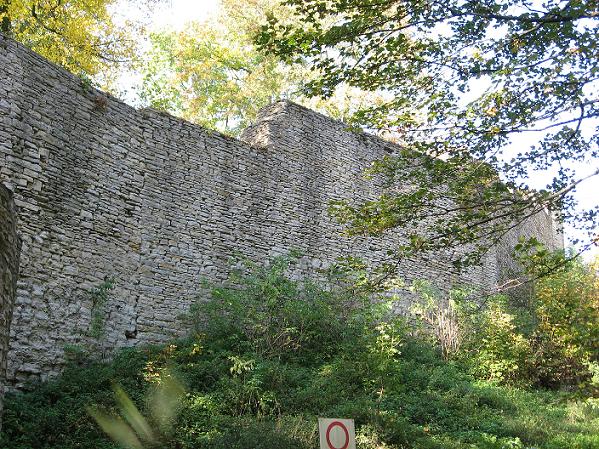 Plesse, remains of the outer wall

The Höckelheim family was probably around longer, but documentary evidence can only be traced to the father of Bernhard and Gottschalk, Helmold von Höckelheim (1079-1144). His descendants moved their main seat to Castle Plesse from which they took the name, but the family retained the Höckelheim possessions (some 20 miles south of the Plesse) where they founded a monastery in 1247. But it were the lands around the Plesse, villages that today are in the commute distance of Göttingen, like for example Bovenden and Eddigehausen, that gave the family their main income. The lords of Plesse also began to accumulate other lands in the area between Hannover and Kassel which they mostly loaned out as fiefs. Overall, they seem to have done well money-wise. 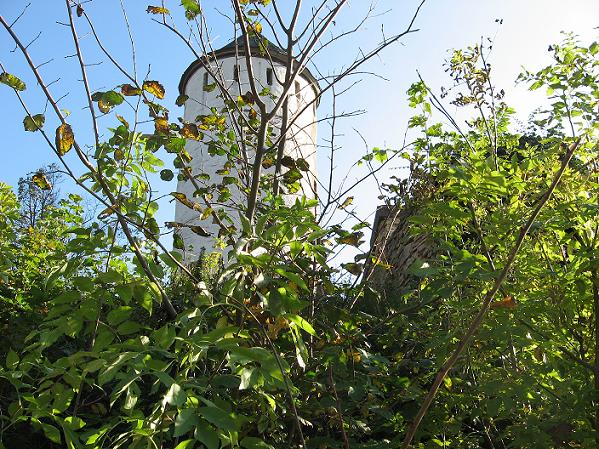 Another shot of the Little Tower
A connection with the von Plessen family in Mecklenburg is possible, but not proven; though the first of that name to appear there holds one of the main names of the family - Helmold of Plesse; he went east as vassal of Duke Heinrich the Lion some time before 1186.

Another founding candidate is a Helmold von Plesse(n) who appears in chartes in Mecklenburg 1247-1283 and was the custodian of the underaged sons of the Duke of Mecklenburg, though his geneaological relation to the Plesse family has never been firmly established. There was a connection to the east with the crusader Helmold II von Plesse (see below), and the family states the relation on their website (4). It is indeed curious that Count Gunzelin of Schwerin, of Mecklenburgian nobility, and the Lords of Plesse appear as witnesses on chartes side by side (fe. in Osterode in 1265). 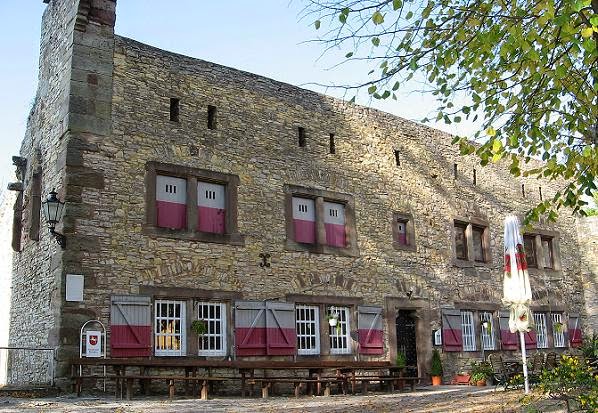 Castle Plesse, the Great Hall
Helmold II (3) of Plesse, born 1191 as son of Bernhard of Plesse and Kunigunde of Hennenberg, can first be found in the retinue of Emperor Otto IV during his official ride through the realm as king and his subsequent journey to Italy (1209).

When several bishops, among them Bernhard of Paderborn, liege of the Plesse lords, started a crusade in Livonia in 1211, Helmold of Plesse led a contingent of Livonian Brothers of the Sword and fought in what is today Latvia and Lithuania to christianise the pagan tribes there. He also witnessed chartes involving the Hansa League in Gotland and their trade in Reval (today Tallinn).

Helmold II of Plesse died in 1236, likely in the Battle of Saule (against the Samogitians, Curonians and other Baltic tribes) which was the first large scale defeat of a German order in the east. So many of the Brothers of the Sword died in the swamps that day, their grand master Volkwin of Naumburg included, that the order was disbandend and merged with the Teutonic Knights. Helmold died childless. 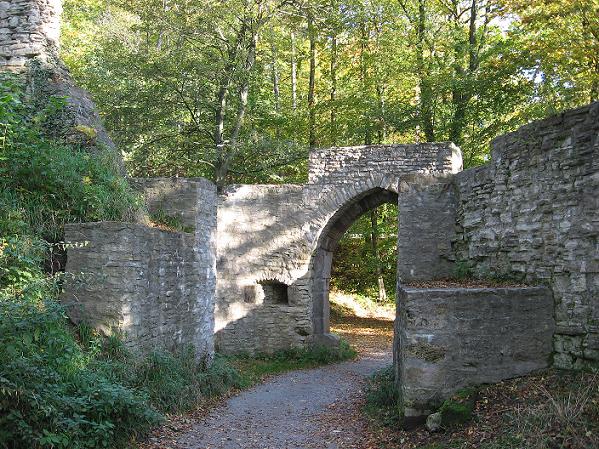 Outer gate seen from the inside
Helmold III (5) was the son of Poppo of Plesse (1209-1255 ?), a brother of Helmold II. He established the family burial in the chapel of the monastery in Höckelheim, the ancient seat of the family. We don't know where the members of the family have been buried before, likely either the chapel in castle Plesse, or the village church in Höckelheim.

Helmold had quarrels with the monasteries in Osterode and Walkenried about rights to a forest and tithes from some villages. The juridical quarrel with Walkenried about the forest dragged on for almost 20 years and left behind a bunch of documents, but the Plesse family lost it in the end.

Helmold III also signed a Contract of Support with the dukes of Braunschweig, Albrecht I and Johann I (sons of Otto the Child) in April 1258. He got 30 marks silver in order to support the dukes - who were not his lieges and thus had to grant him some other advantage. The most interesting clause is Helmold's promise, or willingness, to support the dukes even against his relatives. Since the descendants of Bernhard and Gottschalk so far had ruled their possessions in union, those precautionary agreements may point at some political disagreement within the family (esp. with Gottschalk II from the younger line). In the long run, the pro-Welfen course continued and the lords of Plesse remained in the entourage of the dukes; later in particular the Calenberg line. 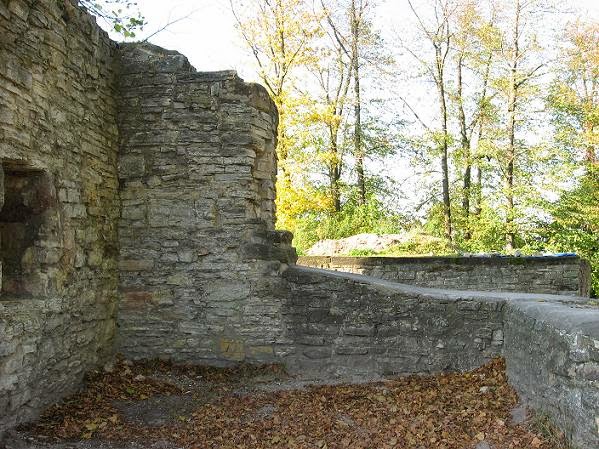 Remains of one of the buildings in the outer bailey
The son of Gottschalk and a (unnamed) wife of the Dassel family, Gottschalk II, married Benedicta of Everstein, adding another knot in the net of local family relationships I'm presenting on my blog. She was a granddaughter of Albert (Albrecht) II of Everstein who had married Richenza, cousin of the Emperor Friedrich Barbarossa; her mother was Agnes of Wittelsbach. Gottfried of Plesse thus married into the high ranking nobility.

Their son, another Gottschalk (1238-1300) bought the parts of the heritage of the older line, the descendants of Bernhard, in 1284, thus his line would become the sole heirs of castle Plesse and the surrounding lands from that time on. 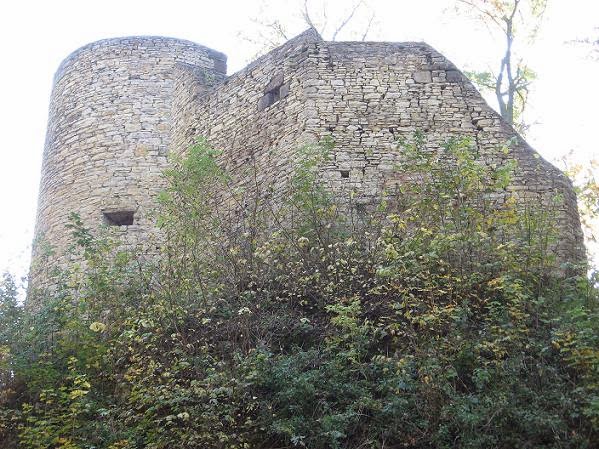 Outer curtain wall with remains of a corner tower
At some point the connection to the liegelords, the bishops of Paderborn, seemed to have become defunct, because the lords claimed the Plesse to be an allodial possession (a reichsunmittelbares Lehen). In 1447 the family - the brothers Gottschalk, Dietrich and Moritz (Maurice) - became vassals of the landgrave of Hessia for the Plesse and 'all adjoining lands and possessions belonging to it'; probably because they needed a protector in a time with increasing feuds along the borders between Hessia, Thuringia and the Welfen lands in Lower Saxony. Chosing Hessia over the prior Welfen connections also marks a considerable turn in political alliances. Paderborn didn't intervene.

The last member of the Plesse family, Dietrich IV of Plesse, died in 1571 and the fief fell back to the landgrave of Hesse-Kassel. The Mecklenburg line, if it is connected to the Lord of Plesse, survives until today.

The Plesse Lords held the castle for 400 years and lived there most of the time. Most of the structures and buildings visible today, or reconstructed according to old paintings and other sources, have been added by that family. 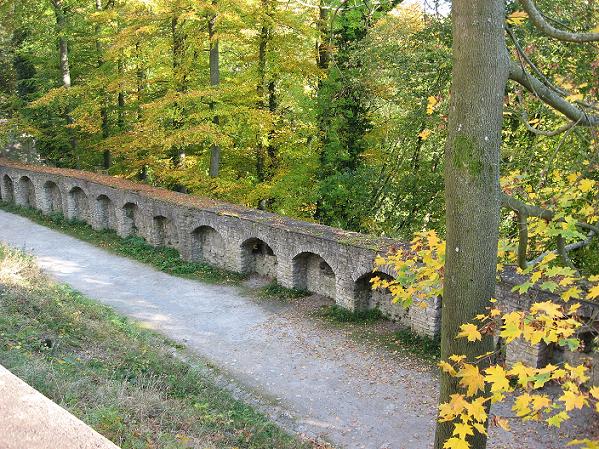 Curtain wall corridor with arcades, seen from the inner bailey
Footnotes
1) The status of the ministeriales, a group typical for the German nobility, is a tricky one. There are some discussions going on abbout their exact role and genesis. Here is a simplified version: They rose from a class of unfree people already in Merovingian times and held important offices (like steward or marshal). In Carolingian times a number of unfree men were given arms to join the heavy cavalry, or a fief to enable them to buy those arms. But compared to freeborn nobles, they had less rights. Their number and importance increased in the 12th century, where a lot of legally unfree people held fiefs and fought as knights (miles in Lartin sources). And because of that they were considered nobles as well - we have to distinguish between legal and social classes here. The king (that is, the realm), the Church, and an increasing number of great nobles had ministeriales. Ministeriales gained more rights, and some of them had more land and played a more important role than many freeborn noblemen. In the 13th century the border between freeborn nobles (Edelfreie) and ministeriales became blurred to an extent that both classes merged.
2) Latin comes was an administrative title, meaning a military commander, and is used more widely than the noble title of 'count'. Usually, the Plesse family is refered to as Edelherren - Lords of Plesse.
3) Not sure where the count as Helmold III on some websites comes from since there is only one other Helmold in the family prior to him, but the correct number is Helmold II.
4) http://www.v-plessen.de/index.html
5) He too, is misnumbered as Helmold IV.

Comments:
I want my own great hall...

And then you use that trebuchet of yours on it. No, you can get one of the broken curtain wall towers to play with. :-D

Yet another amazing castle surviving in good condition.

Agnes of Wittelsbach... Did she do anything else or spend all her earthly days in a birthing chamber? Poor thing... Her daughter and namesake was a wife of our exiled High Duke Władysław Wygnaniec [the Exiled]. Thier children were half-cousins of Barbarossa, one of them Bolesław Wysoki [the Tall] accompanied Frederick to Italy and won his fame there :-) The emperor helped him to get back his lost land in Silesia.

Kasia, it was Agnes of Waiblingen (also known as Agnes of Babenberg) who had enough children to fill two soccer teams. Agnes of Wittelsbach comes from another family; the Wittelsbach got the duchy of Bavaria after Heinrich the Lion fell into disgrace.

I meant Agnes of Waiblingen, of course :-)

In Poland it's her daughter, who we call Agnes von Babenberg. How is she called in Germnay?

I think Agnes of Waiblingen most of the time.

They should have numbered the girls, too, but no matter how many Agnes or Mathilda there were in a single family, they never get numbers, only husbands. ;-)

They definitely should have numbered them :-)