18 Dec 2016
Dowager Queens, Skirmishes, and a Bonnie Prince - The History of Doune Castle, Part 2
Doune Castle had been the favorite residence of the Duke of Albany since 1401 at latest - he wrote letters dating from Doune Castle regularly since 1401 - as well as his son Murdoch and Murdoch's wife Isabella. The place was already a fitting abode for a duke, but it was not yet complete in the 1420ies.

After the execution of the Albany Stewarts, the importance of Doune Castle declined. It became a hunting lodge while the main seat of the Stewart kings was the nearby Stirling Castle. That is the likely reason why the castle was never completed - some windows in the southern curtain wall point at intended buildings along that wall. 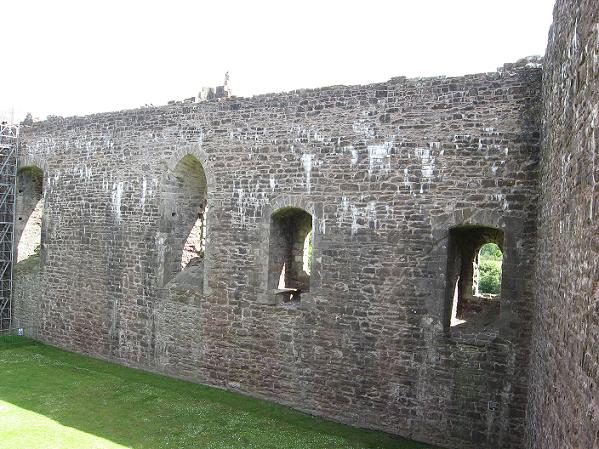 After King James I was murdered in Feburary 1437, Isabella Stewart regained most of her titles and estates, though Doune Castle remained a royal possession and the title of the Duke of Albany was later given to a son of King James II as second creation.

The death of James I left Scotland with an underage king (James II was six when his father was assassinated) and a regency again. Queen Joanna, who was wounded in the fray but escaped the murder of her husband, was more or less kept prisoner at Stirling Castle. But when he came to adulthood, James II would deal with the power greedy men who made his childhood a misery, first among them the Douglas earls. He personally killed William 8th Earl of Douglas (Feburary 1452) 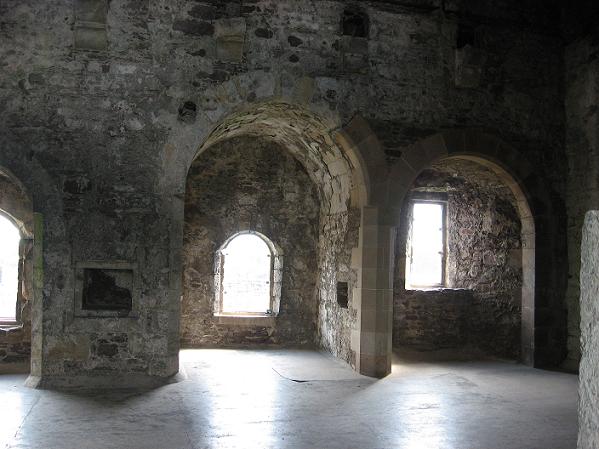 The Duchess' Chamber
James II married Mary of Guelders in 1449. He died in August 1460 during the siege of Roxburgh Castle (which was still held by the English) when a cannon exploded near him. Unfortunately, James III (* 1451) was underage as well. But Mary of Guelders proved a strong woman and partook in the regency, together with Bishop James Kennedy. Doune Castle was her dower house which she visited several times.

In England, the War of the Roses was in full fray. Mary supported the Lancastrians and gave King Henry VI and his wife Margaret of Anjou shelter when they fled to Scotland after the Battle of Towton (March 1461). But their relationship detoriated when Duke Philippe of Burgundy, Mary's great-uncle, allied himself with the Yorkist king Edward IV. Margaret went to France to seek aid there, while King Henry was hiding out in Northumberland (where he got captured in 1465).

Mary of Guelders died in December 1963, her son James III died in the battle of Sauchieburn in June 1488 against a rebel army led by his own son. His wife, Margaret of Denmark, had received Doune Castle as dower house, but she died two years before her husband. 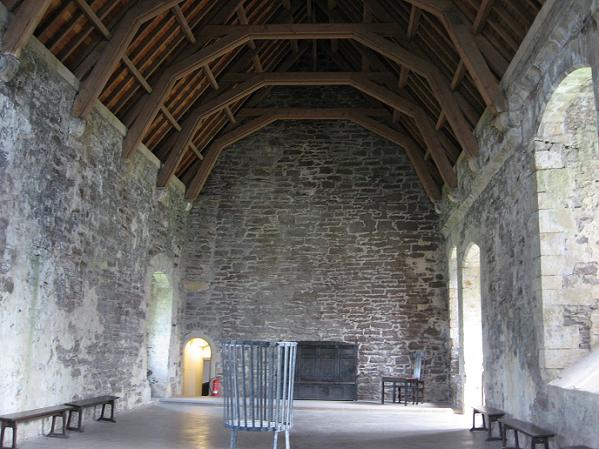 The Great Hall
James IV married Margaret Tudor, daughter of King Henry VII, first of the Tudor dynasty on the English throne. James died at the disastrous Battle of Flodden Field in 1513. Margaret survived her husband for 28 years, again receiving Doune Castle as dower house. And again the Stewart king was too young to rule - James V was born only a bit more than a year before his father's death. The usual dance of regents ensued.

Margaret remarried Archibald Douglas 6th Earl of Angus (1514), who acted as one of the regents for the king, but they had a falling out and got divorced in 1527 (James V had meanwhile become king in his own right). Margaret then married Henry Stewart 1st Lord Methven, a descandant of Murdoch of Albany. His brother became James Stewart 1st Lord of Doune. James's son, another James, would become Lord of Doune and Earl of Moray by his wife in 1570. Thus Doune Castle came into possession of the Moray earls who held it until the 20th century. 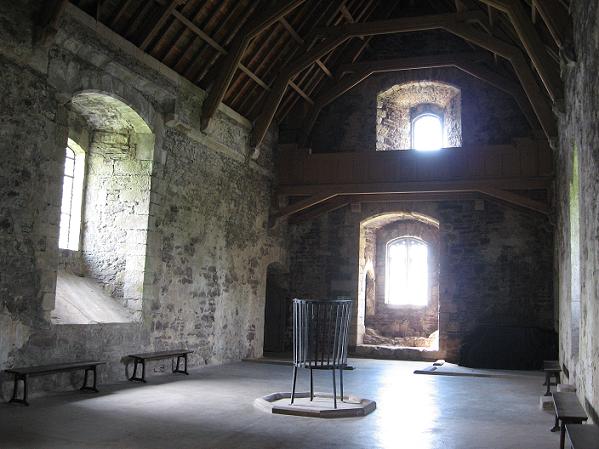 Minstrel's gallery in the great hall
Doune Castle obviously was not in best repair in the 1520ies, since its then keeper, William Edmonstoun, wrote to the dowager Queen Margaret that the castle could house her and her gentlewomen, but not the rest of her attendants. She interpreted that as refusal to fulfill his duties, and upon marriage to Henry Stewart installed James Stewart as keeper (see above).

The castle seems to have been in good enough repair for Mary Queen of Scots (reigned 1442-1567, executed 1587) to stay there several times; she occupied the suite of rooms in the kitchen tower. I won't go into details about that interesting and unfortunate woman in this post, though.

After Mary was imprisoned in England, Doune was held by the 2nd Lord Doune for the queen in 1570, but he eventually surrendered to the regent, the Earl of Lennox. The castle and its pleasant surroundings attracted the interest of the young King James VI who in 1581 spent the considerable sum of £ 300 on repairs and improvements. But when he became King of England as well in 1603, he left Scotland and royal interest in Doune Castle ceased. 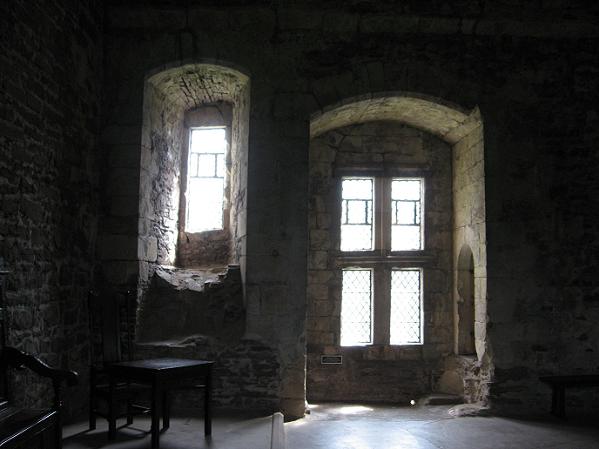 Four-light dais window in the great hall
Doune was never involved in a major military expedition, but its proximity to the more important Stirling Castle brought it into the focus of action nevertheless. During the civil war, Doune was held by the Royalist James Graham Marquess of Montrose before the battle of Kilsyth (August 1645), but after the royal army lost at Philipphaugh a month later, Montrose had to flee into exile. Another skirmish took place near the castle in 1654 when the Royalists under Sir Mungo Murray fought some Covenanter troops during the so-called Glencairn Rising which ended in a peace treaty, the Act of Pardon and Grace.

Doune was back on the royal side during the Jacobite Risings of 1715 and 1745. The castle was held by a MacGregor of Glengyle for Prince Charles Edward Stuart, better known as Bonnie Prince Charlie. It was used as prison after the victory of Falkirk in early 1746 when some 150 government 'redcoats' were held prisoner in the castle. Six of them managed to excape from the chamber above the kitchen by knotting bedsheets together and climbing out of a window. More men would have gone that way had not the sheets ruptured. Those redcoats were lucky that Doune has no nasty, damp and dark dungeon. :-) 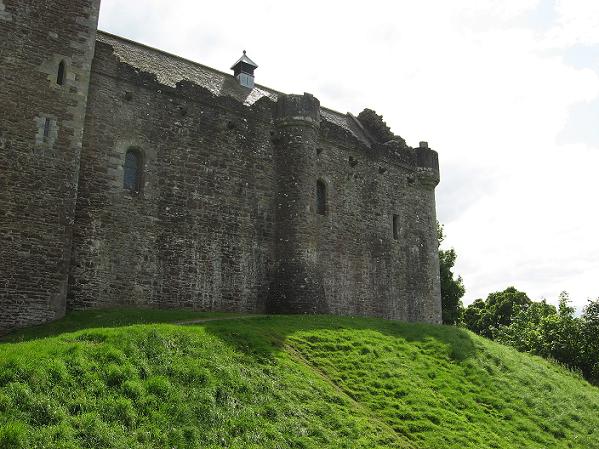 Curtain walls
Afterwards, the castle was no longer used and deteriorated. By 1800 it was a ruin without roofs. It was George Stuart, 14th Earl of Moray, who commissioned repair works in the 1850ies. The timber roofs were replaced and the wooden panelling in the Lord's Hall added, among other repairs and restorations. I could not find out whether any of the Moray earls ever used the castle since then.

It was given to the care of Historic Scotland by the 20th earl in 1984. Doune Castle is a Scheduled Ancient Monument catergory A and open to the public (when there is no filming going on).

Comments:
Gosh you managed to get an awful lot of history in that one post! Margaret Tudor seems to have led a fascinating and difficult life.

Oh yes, the Tudors and their many marriages. Until Elisabeth made up for it and never married at all. :-)