14 Apr 2017
A Virtual Tour through Mediaeval Ghent
Let us take a little tour of Ghent in Flanders, one of the largest towns in Europe in the 13th century, famous for its trade in fine cloth, member of the Hanseatic League, and a town with a lot of its old buildings intact. In short, the perfect place for me to visit. 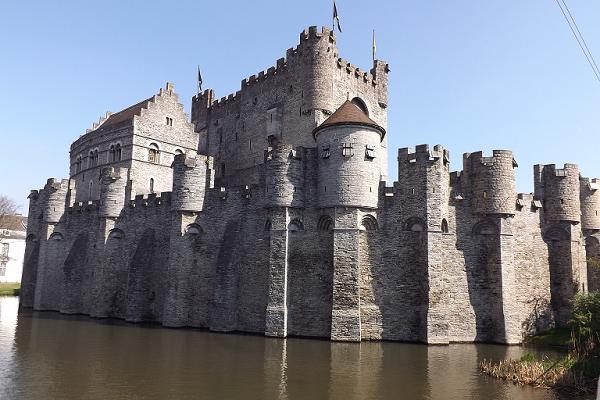 Gravensteen castle, just a few steps from my hotel

It was warm and sunny when I arrived in Ghent. And right outside the very nice hotel situated in a old town house, I found this fascinating castle, called Gravensteen (Count's Castle).

No question where to go first. :-) 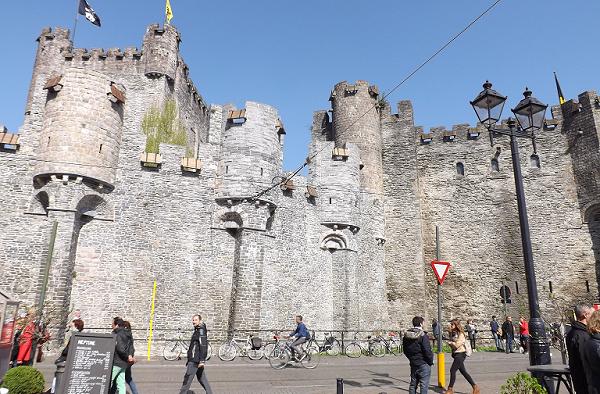 A big whopping castle in the middle of Ghent
The castle is huge and I spent quite some time exploring all the corners and rooms, inlcuding the torture chamber. Unfortunately, the historical buildings in Flanders often don't provide guidebooks like the ones I keep bringing back home from Scotland or Wales (or the more famous German sites), so I will have to hunt down some information for a longer post some later time. 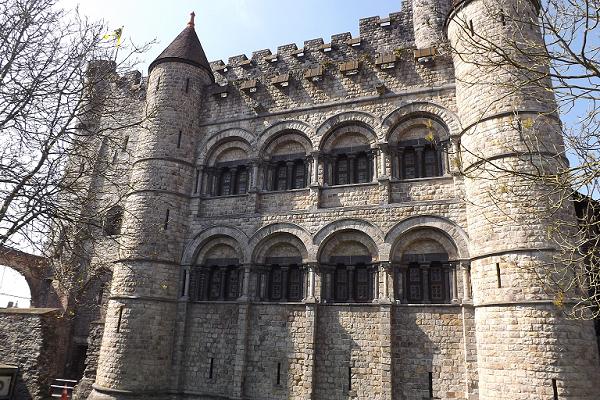 The great hall
The castle was built by the counts of Flanders in the 12th century. They lived in the place until about 1400 when they moved to the - now destroyed - Prince's Palace. The castle then served as high court of justice until the French Revolution and afterwards housed a cloth manufactury. The Gravensteen was restored to its Mediaeval look in the early 20th century. 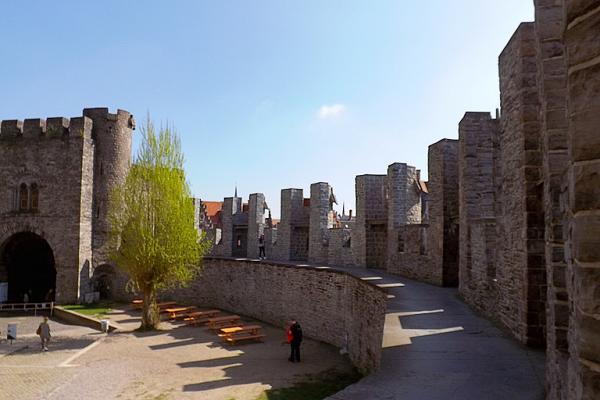 Outer curtain walls with walkway and battlements
Due to the fine weather and it being a Sunday, there were a lot of tourists around, but I could still mostly photograph around them. The place will be even more crowded in late spring and summer. There also was a knight in shining armour who posed for pictures with the kids. 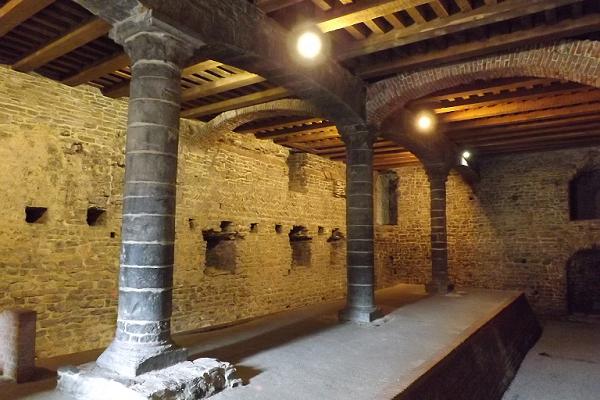 The oldest hall
The castle is dominated by the donjon turned into a great hall, surrounded a set of curtain walls with 24 watch towers. The high double gate tower reminds me a bit of the Edwardian castles in the UK. The oldest hall (photo above) is now under the ground level of the inner bailey. 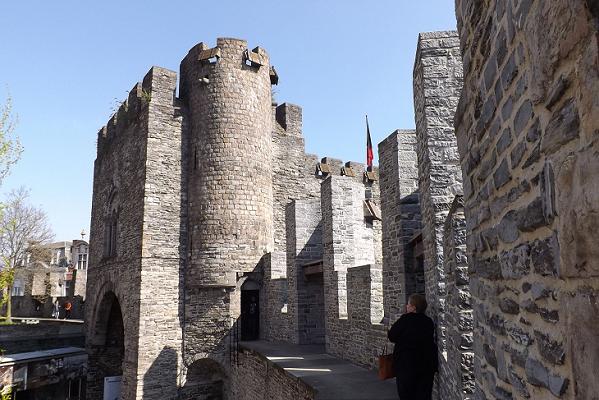 The gate tower seen from the curtain walls
When I finally left the Gravensteen I walked around in the old town, looking for pretty vistas which I found in abundance, esp. with the sun and lots of water to add to the beauty. Later I also took a tour on the canals - you can't visit either Ghent or Bruges without doing one of those. 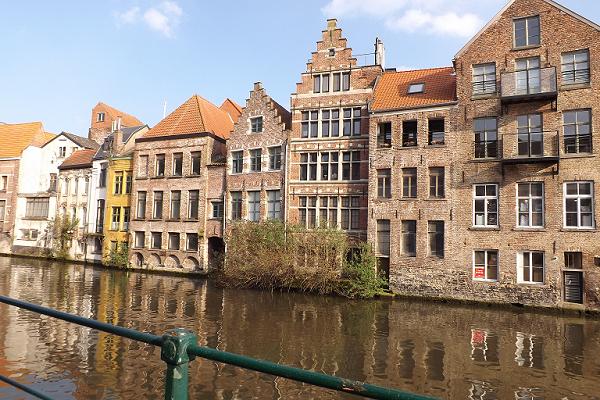 Pretty old houses at the Kornlei
Ghent lies at the confluence of the Leie (Lys) river into the Scheldt (which in turn enters the North Sea) and had been criscrossed by canals called Grachten in the Middle Ages. Many of them have been filled in or covered up in later centuries, but there are still a number of waterways around, and the town plans to open up several more. 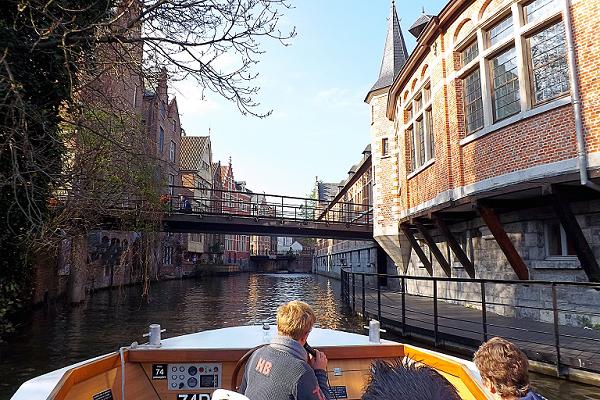 A canal tour by boat
Here is a shot from the boat. The red brick building to the right is the Fishers' Hall, a Neogothic building at the place of the old fish market. There are a lot of tourists from the French speaking part of Belgium around, so the guide gave the tour in Flemish Dutch, French and English. A fun way to pick up some Flemish. 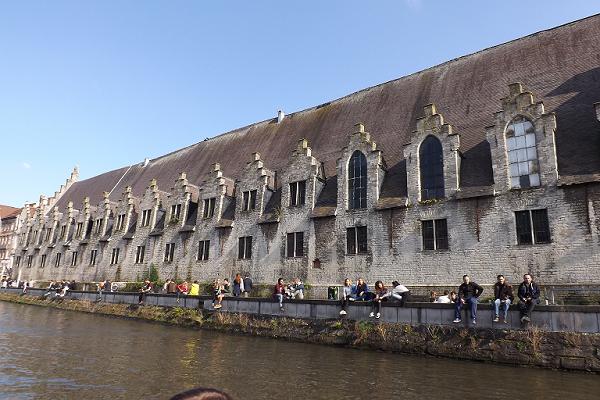 Vleeshuis - the Butchers' Hall
At the other side one can see the Butcher's Hall. The quality control of meat was very important and every butcher who wanted to sell his wares could only do so in this hall since the 15th century - the time to which the building dates. Today, local food produces are sold in the hall. 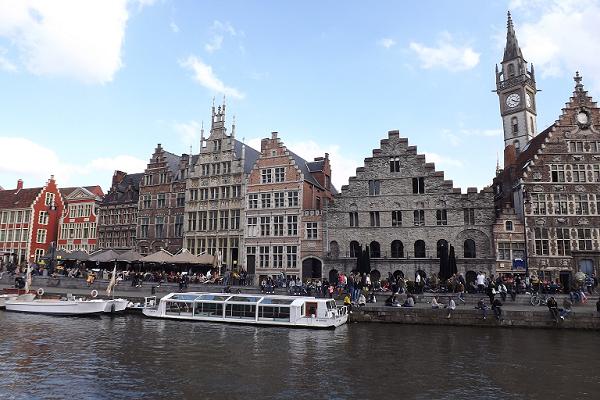 Old houses at the Graslei
And more pretty houses, either truly old, or restored. The grey stone house with the crow step gable dates to the 13th century. Graslei and the opposite Korenlei (not to be confused with the Kornlei in a photo further up) were the old town harbour. Today the quays are full of restaurants where one can sit outside in fine weather. 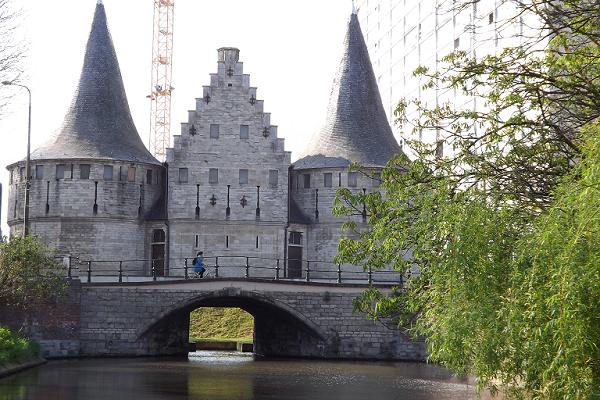 Het Rabot - the remaining city wall gate
The remaining town gate, called The Rabot, dates to the late 15th century. It is a combination of gate and sluice, situated where the river Leie crosses the town moat. The name is a corruption of the French word rabattre - shut down the beams. 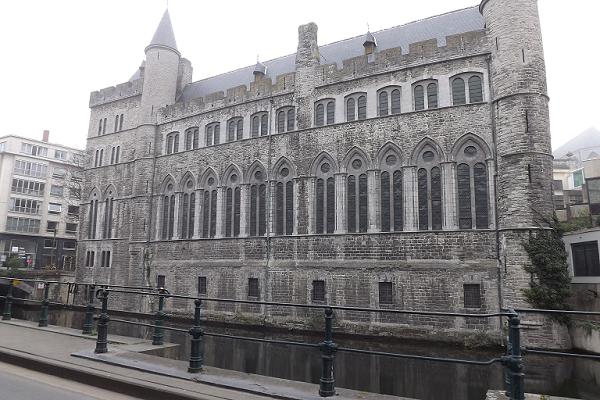 The Duivelsteen
The next morning started out misty, but the sun came out about mid day.

The fortified manor of Geraard de Duivelsteen was one of the first stone houses in Ghent. It started out as fortified house in the 13th century. The large windows were probably added by Geraard 'the Devil' in the 14th century. We don't know for sure why I got that nickname; some say that he had an unusually dark skin, others blame his alleged five marriages and mysteriously dying wives. 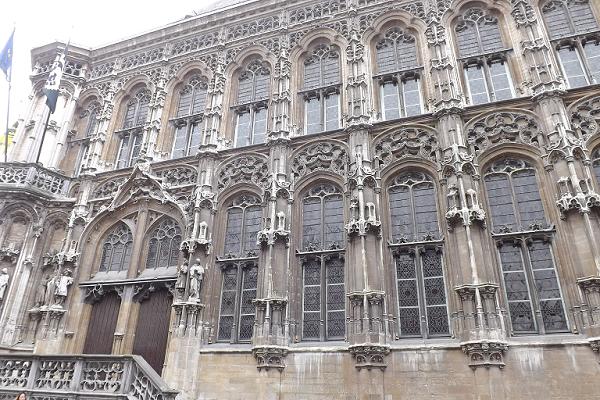 Town hall, the Gothic façade
The town hall is a work of several centuries, as its façades show: the older one is flamboyant Gothic, the younger one Renaissance style. The Gothic part was begun in 1518 to grand plans, but only part of the house was eventually built and most of the niches in the façade don't hold any statues as was intended. When construction was continued, the style had changed and the other side got a Renaissance design. 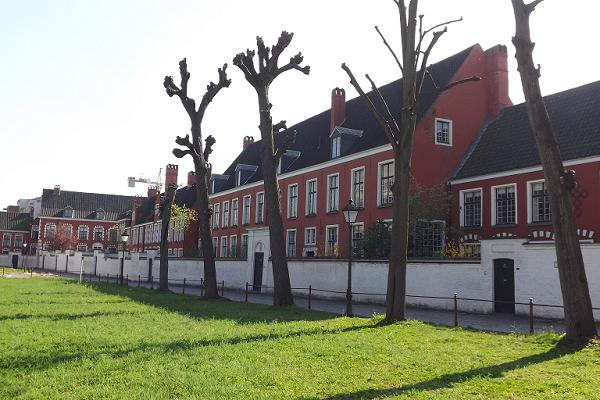 The 13th century Ter Hoyen béguinage
The eldest of the three béguinages in Ghent. Beguines were women who lived together in a semi-religious community without taking vows (though they remained chaste). A lot of them were widows. In the Middle Ages, béguinages were often founded by nobles to provide charity for the poor, later women had to buy themselves in. Béguinages are typical for Flanders and the Netherlands where they were in use until the last century. 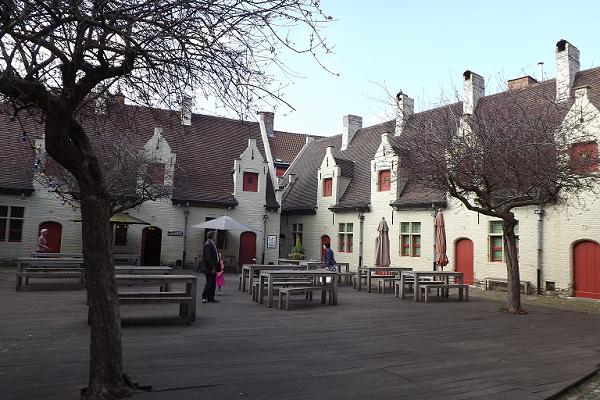 Yard in the Huis van Alijn
Huis van Alijn once was a hospital and infirmary, then an ethnological museum, and now a museum showing furniture of the 20th century. Well, I didn't care about rooms decorated in the style of the 1970ies - I had one of those myself - but the courtyard with its little pub is a lovely and quiet place to sit and have one of the famous Belgian beers. 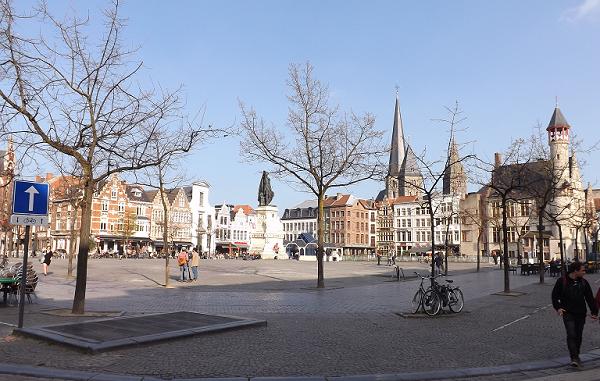 Vrijdagsmarkt
The Friday Market is the place in the Ghent that has seen a lot of history since 1199, processions and tournaments, but also revolts and bloodbaths, like the feud between the weavers and fullers in 1314. Edward III of England was given a splendid reception here in 1340, much to the displeasure of the King of France. 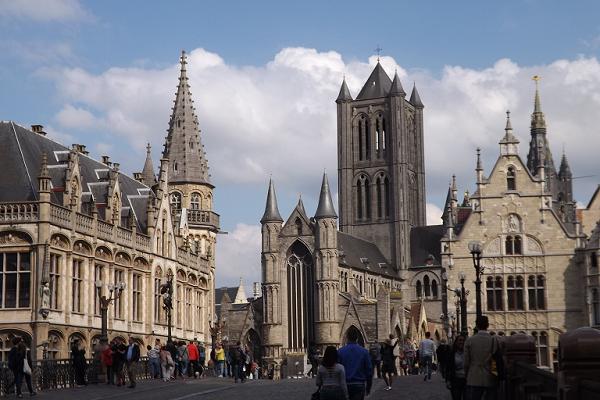 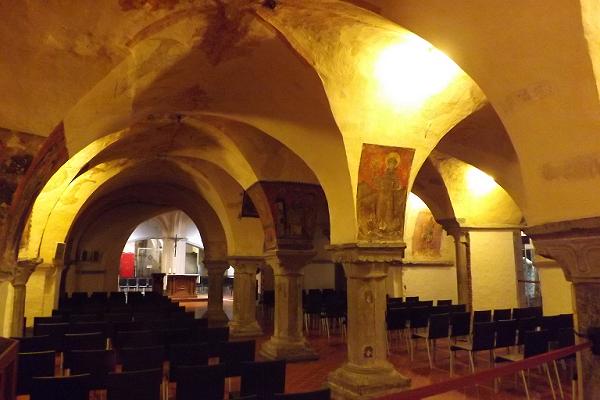 St.Bavo cathedral, the Romanesque crypt
The most famous church is St.Bavo Cathedral. The building is mostly 16th century Brabantian Gothic, but the crypt is Romanesque, remains of an older church beneath it. The famous Ghent Altar of van Eyck is displayed in the cathedral, but no photos of that one, sorry. Absolutely verboten. 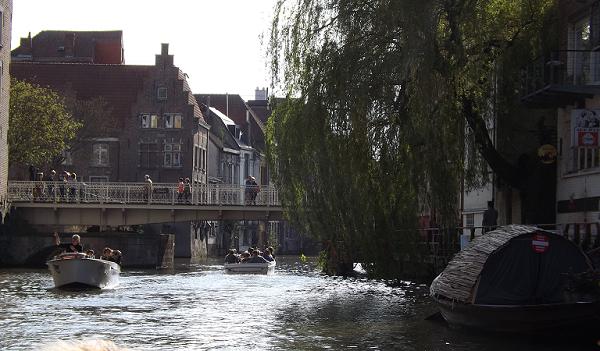 The canals of Ghent
Let us return to the cathedral and the Bavo Square in front of its westwork. The place is framed on the other side by another building with a tall tower, the belfry of the Cloth Merchants' Guild Hall (Lakenhal).

A tale of two towers:
Right: belfry of the Cloth Merchants' Hall; left: tower of St.Bavo cathedral
There was a competition going on between the rich merchants and the Church who could build the higher tower. Today, the belfry of the Cloth Merchants' Guild Hall and the main tower of St. Bavo Cathedral dominate the skyline of Gent's old town. The third, the tower of St.Nicolai Church, isn't quite as high. The belfry is 91 metres high, the cathedral tower 89. The merchants won. 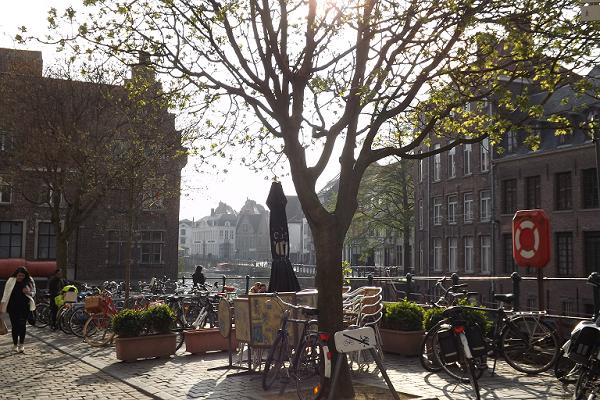 Evening in the Patershol quarter
In the 19th century, the Patershol was a poor workmen's quarter and fell into decline when most of the industry left the town, but in the last 20something years the houses have been renovated, and today it is a very nice place.

Posts about Bruges and the other places I've visited (Antwerp and Tongeren) are linked here.   ¶ April 14, 2017

Comments:
What a beautiful place! And to find somewhere to stay right by that castle - what a bonus!

Anerje, Ghent - and Bruges - are definitely worth a visit.