9 Jul 2017
From Castle to Convention Centre - Castle Scharfenstein in the Eichsfeld
We can thank Pope Benedict XVI for most of the repairs of castle Scharfenstein near Leinefelde-Worbis (1), and the surprisingly comfortable road leading to it.

The castle sits on a promontory of a musselkalk plateau near the twin town of Leinefelde-Worbis in the Eichsfeld, a Catholic enclave in the overall Protestant county of Thuringia and a small part of southern Lower Saxony (2). And that is why the pope came here in 2011. 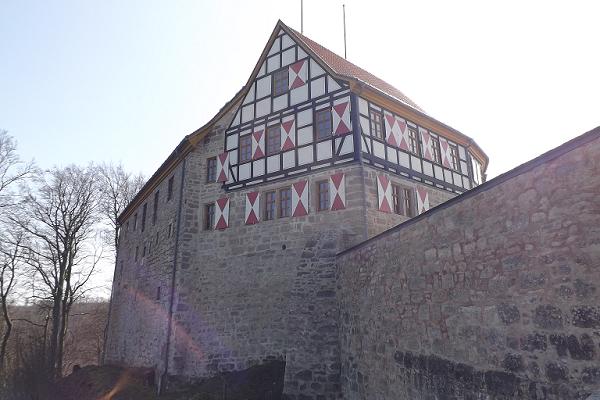 Castle Scharfenstein, view to the inner bailey with the great hall

Like so many castles in the former GDR, the Scharfenstein had first been used as state holiday site for families and later fell into decline; it was pretty much abandoned in the 1980ies. After the reunion, no one wanted to take the financial burden until the community of Leinefelde-Worbis bought the ruins in 2002. The visit of Pope Benedict gave a real boost to the renovation work, since it was planned for him to hold a public mass there. The event was later moved to nearby Etzelsbach Chapel, but the road, the newly renovated great hall and the rooms in the former stables and other outhouses remained. 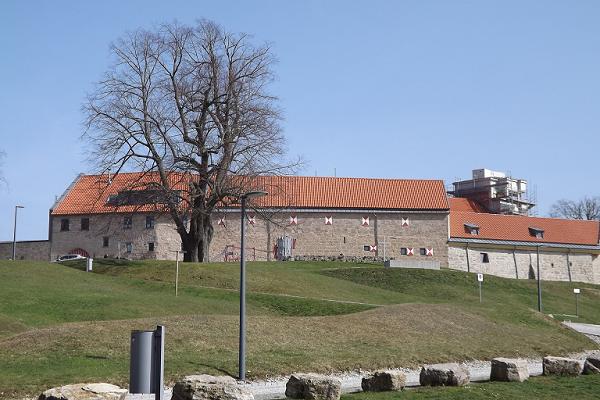 View to the castle, with the keep in construction to the right
The castle probably dates to the second half of the 12th century; a Godehard of Scharfenstein is mentioned as witness in several chartes since 1161. The castle itself is first mentioned in 1209.

There must have been some feudal problems between the lords of Scharfenstein and the landgrave of Thuringia, because Landgrave Ludwig III conquered the castle in 1219 during a feud with the archbishop Siegfried II of Eppstein of Mainz; a feud which had been caused by the strife between the emperor Otto IV and Friedrich II of Staufen. 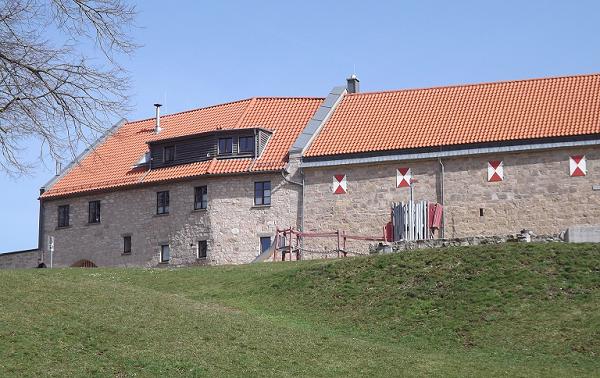 The outer bailey seen from the outside
The castle then went to the family of Gleichenstein (sometimes also called 'of Gleichen') who must have been vassals to the landgraves of Thuringia. In 1287, Heinrich the Illustrious pawned out the 'castrum Scharphenstein' to the archbishop of Mainz. His successor Albrecht II ('the Degenerate' - he of the ongoing money problems) sold the castle to Mainz together with some other possessions a few years later (1294). This was the beginning of the Eichsfeld, an enclave of the archbishopric of Mainz in Thuringia. The lords of Gleichenstein seem to have kept the castle as fief for some time. 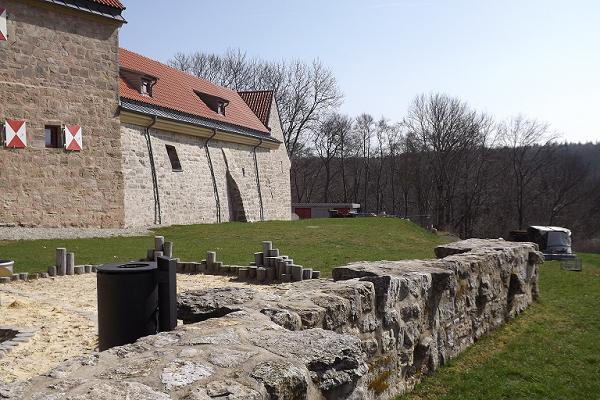 Remains of the outer curtain walls in the foreground
The castle must have been much larger than today at the beginning of the 14th century. But it burned down in 1431, due to a lightning strike. At that time, the Scharfenstein was held by the Wintzingerode family who rebuilt the castle, but in smaller scale. The Wintzingerode - the family still exists today - had large possessions in the Eichsfeld (3). 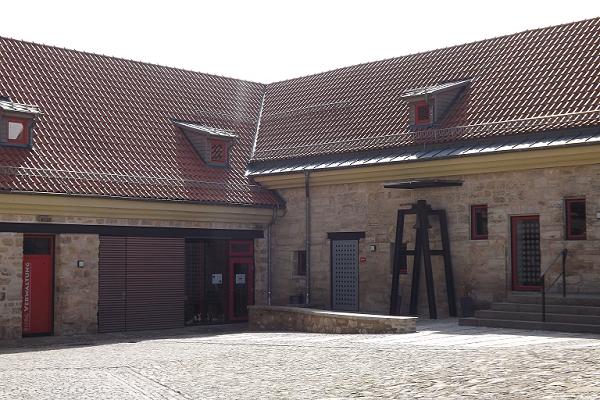 The outer bailey with convention rooms and a chapel
Next time the castle comes into the focus of the local history was during the Reformation. The former Cistercian munk Heinrich Pfeiffer, a follower of Luther's reformation, found shelter on the Scharfenstein in 1521. But he joined the more radical and anti-nobility preacher Thomas Müntzer who led a peasants' army in revolt against not only the Catholic Church but against the nobility as well. Many castles in Thuringia fell prey to the peasants and went up in flames; Pfeiffer led his men to castle Scharfenstein and destroyed it (1525). So much for gratitude. 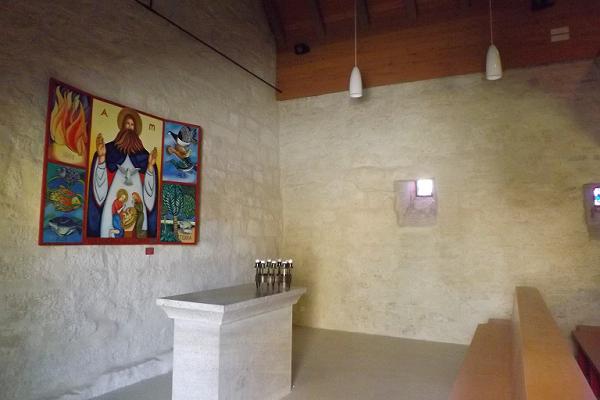 Interior of the chapel
The peasant revolt was put down and the leaders executed. Friedrich of Wintzingerode rebuilt the castle in 1532. Friedrich was a Protestant and at the time held the castle as pawn from the Catholic archbishop of Mainz. Who probably was not happy about that. The archbishop was looking around for money to redeem the pawn and kick that Protestant guy out. He succeeded in 1587, during the Counter-Reformation, and regained the Catholic foothold in the Thuringian Eichsfeld. 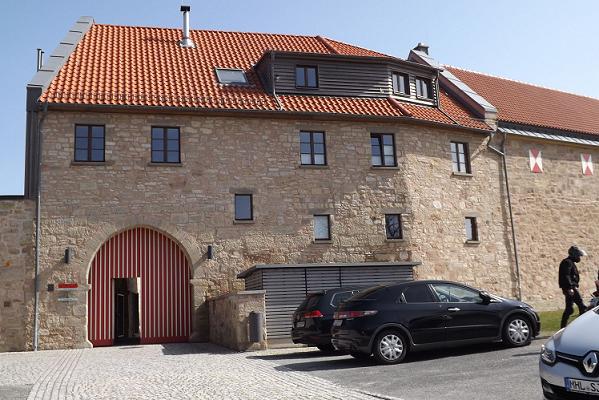 The gate house
The Eichsfeld came to Prussia in 1802, and the Scharfenstein was turned into a royal domain. But it was not one of the most important places; the crumbling granary and keep were demolished instead of reapaired in 1864. A few years later the castle - or what was left of it; basically the great hall - became the lodge of the district forester. It served in that function until 1956. (Not so different from the fate of another Eichsfeld castle, the Altenstein) 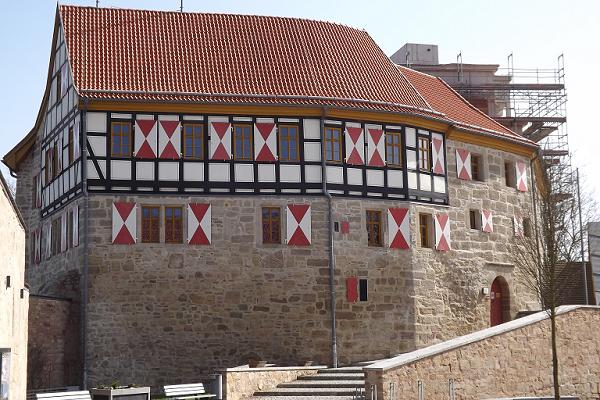 The great hall in the inner bailey
The Wintzingerode still had some interest in the castle. In 1905, Baron Wilhelm Chlothar of Wintzingerode tried to rebuy the Scharfenstein from Prussia, but his offer was turned down. Well, maybe he counted himself lucky a few years later when most of the outbuildings of the castle were destroyed in a fire (1909). I wonder if the forester kept sending letters about the bad repair of his lodge to the revenue of Prussia like his colleage from the Altenstein did to the revenue of Hessia. 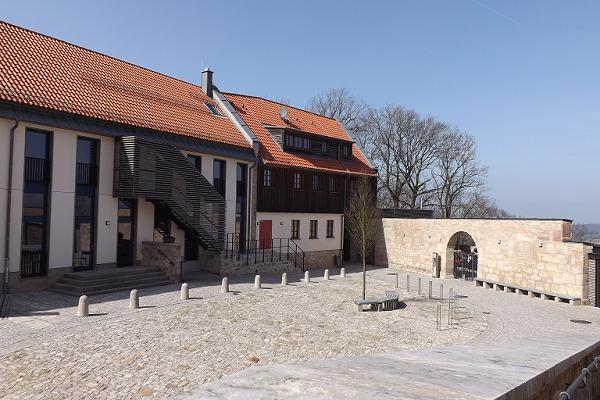 Another view of the yard, towards the gate house and the former granary
Today, excavation and restoration work is still going on. One feature-in-constuction is a modern tower with glass walls at the site of the former keep. One can discuss the addition of modern elements in a Mediaeval castle (instead of restoring the old buildings), but since the place is intended as convention centre, the modern elements may work. After all, the community has to get some money out of the expenses it put into the castle.

There is a restaurant at the site of the former granary, with a terrace that offers a good view. 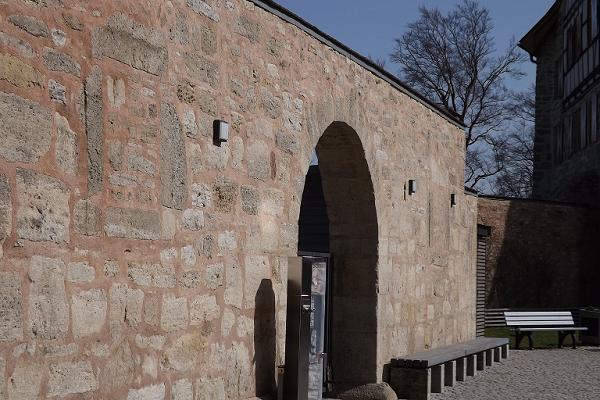 Former wall of the granary, with the gate now leading to a terrace
Footnotes
1) There are two more castles called Scharfenstein, one in the Middle Rhine Valley and one in the Ore Mountains near Chemnitz in Saxony.
2) Which leads to the fun fact that Thuringia gets the Catholic holidays which Lower Saxony does not get; and twice a year all the Thuringian Eichsfeld comes to Göttingen for shopping..
3) They lost most of it during the GDR-expropriations, but got returned some of their land and the castle Bodenstein after the reunion.
¶ July 09, 2017

Comments:
It looks fantastic! I can totally understand unease at adding modern facilities instead of restoring the old ruins, but the fact it had been left to decay because no-one wanted to take responsibility shows that sometimes strategies need to be changed to ensure survival. It's all in keeping with the original castle and helps it's survival.