21 May 2018
Pretty Houses and a Famous Minster – A Virtual Tour through Strasbourg
Strasbourg is a pretty town and even prettier in sunshine. But since I visited the place on a sunny Sunday in late April, there were more tourists than in Bruges. It was almost impossible to get photos without people standing in front of the vistas. 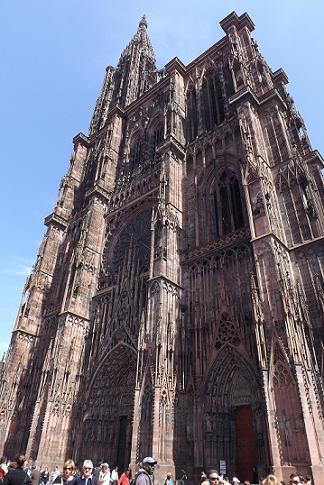 The Minster in Strasbourg, westwork

Strasbourg is best known for the famous Minster (Cathedral of Our Lady). Its construction began in the 12th century, but it would take until 1439 to finish the building - and only the north tower was erected to its intended hight of 142 metres. At that time, the Minster of Strasbourg was the tallest building in the known world, surpassing the pyramids of Gizeh. 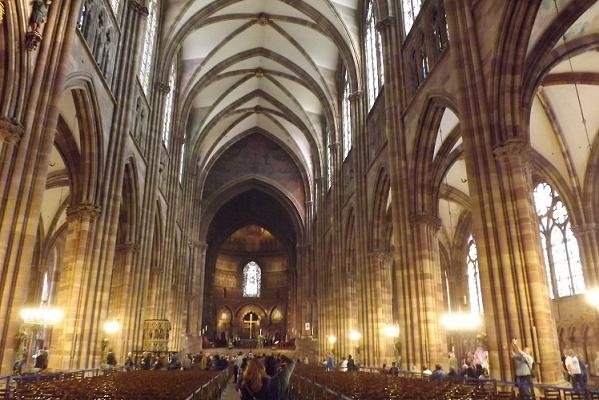 The Minster, interior
You see what I said about people? On Sundays, the times when tourists can visit the interior are limited due to the religious activities going on in the church, and then they stream in all at once. I had planned to arrive at Saturday early afternoon to avoid this problem, but a strike in France obliged me to spend five hours on trains instead of the two hours I had planned, therefore I arrived in the evening. 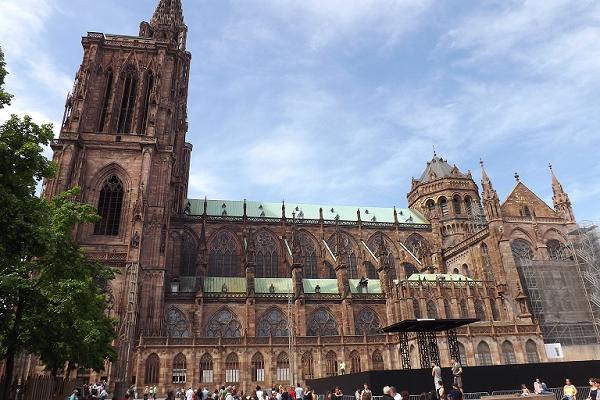 The Minster, exterior
Although the construction began at a time when the Romanesque style was still prevalent, the Minster today looks like a purely Gothic building, and a splendind one at that. Particulary the westwork of red sandstone (see above) with its statues and ornaments is stunning. 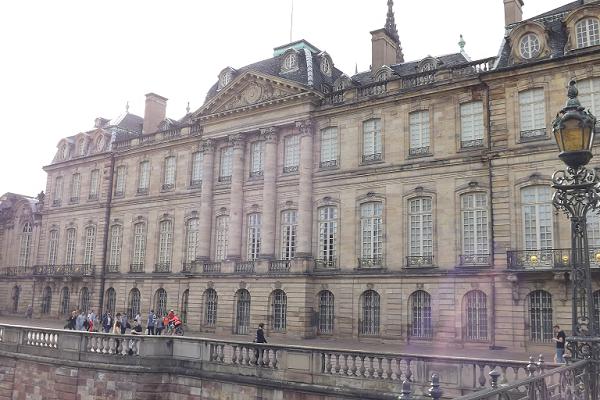 Palais Rohan, the river side
The Palais Rohan directly behind the minster was commissioned by a cardinal, member of the House Rohan . It was finished in 1742, a fine example of Baroque architecture. Today it houses several musuems, among them the Musée Archaéologique. 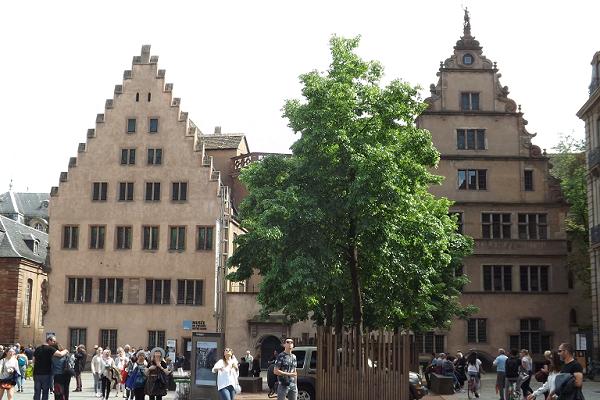 The Frauenwerksmuseum
The Musée de l'Œvre Notre Dame dates to the 13th century - with 17th century extensions - and hosts the Museum of the History of Arts. The double-gabled building also is the seat of the cathedral workshop since the Middle Ages (from whence the name 'Work of Our Lady'). 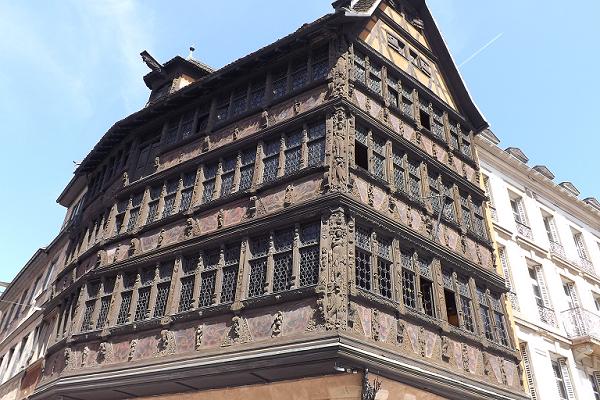 The Maison Kammerzell
The House Kammerzell at the place in front of the minster is the finest timbered house in Strasbourg. It was built in 1427 and altered in 1589; the most spendid example of late Gothic secular timber architecture in the former Holy Roman Empire. The facade displays carving of mythological and Biblical figures.

The photo shows the timbered upper floors; the basic storey is made of stone, but there were those ugly stalls that sell tourist kitch in front of it. 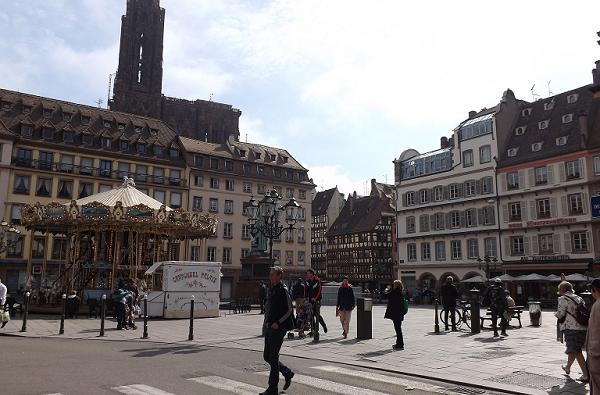 The Place Gutenberg
The Gutenberg Place is named after the famous printer who lived in Strasbourg 1434 - 1444. It is framed mostly by Renaissance buildings, among them the former town hall. The Gutenberg statue dates to the 19th century. 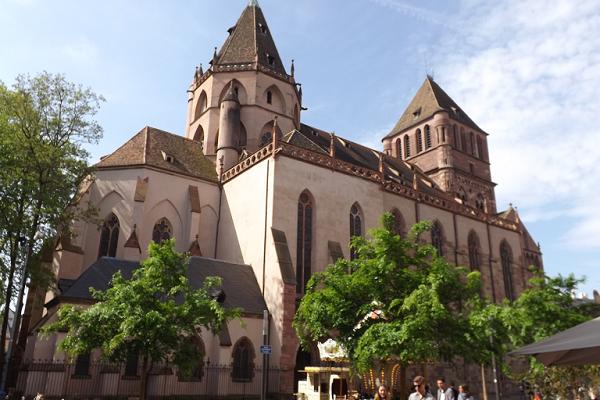 Strasbourg has more than one church, of course. St.Thomas' Church took several centuries to complete (1196 - 1526). The five-naved hall church shows a mix of Romanesque and Gothic elements. It proved much quieter and a lot less tourist-y than the minster. 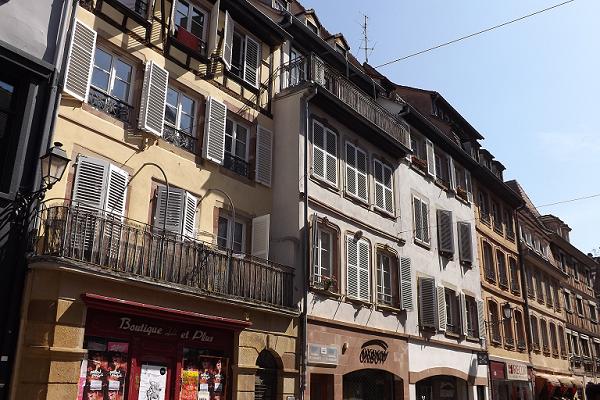 Mediterranean flair - houses in the Grand Rue
The Grand Rue is the main street of the old town. It already was the main road of the Roman fort at the site. Most of the houses we can admire today were built by artisans and craftsmen in the 16th to 18th centuries. 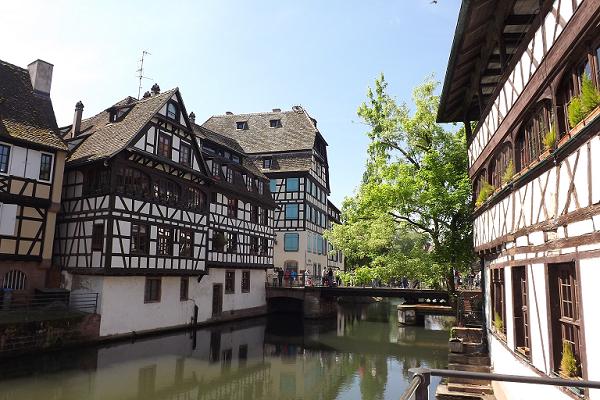 Half-timbered houses in Petite France
Petite France - Little France - is the name of the quarter which in Mediaeval times housed the workshops and living places of tanners, butchers, fishermen and other smelly and less savoury occupations. Later it became the site of brothels and cheap pubs. The name 'Little France' comes from the French disease (syphilis) which could easily be contacted there. 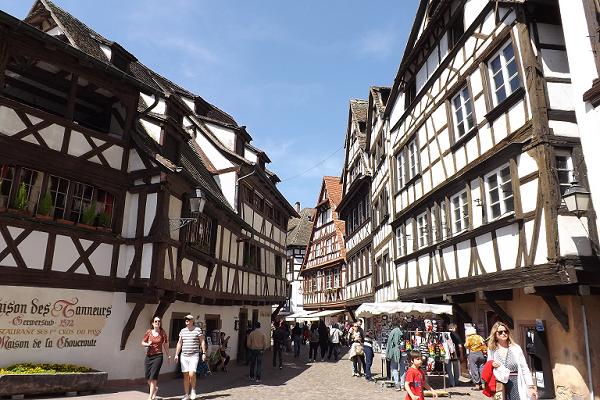 The Tanners' Street in Petite France
Nowadays the pretty half-timbered houses in the typical style of the Rhineland, dating mostly to the 16th and 17th centuries, have been renovated, and the Petite France has become one of the tourist attractions of Strasbourg. There are a lot of small winstubs (wine houses) and gift shops. 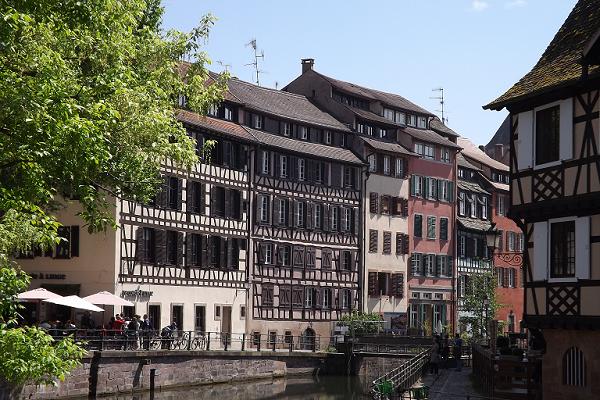 More pretty houses in Petite France
The old town of Strasbourg is located on a isle between two branches of the river Ill shortly before it confluences into the Rhine. The Roman fort was located on the island, later the Mediaeval town developed at the site which is known as Grande Île. The entire 'Grand Island' was granted UNESCO World Heritage status in 1988. 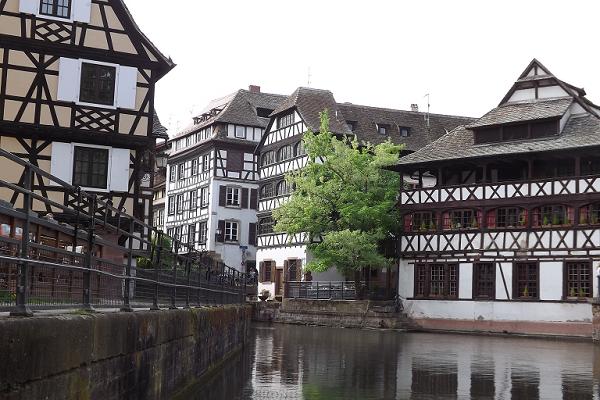 Petite France seen from the boat

With so much water about, boat tours around the Grand Island and the river Ill leading to the European Quarter are offered on a regular schedule. In fact, they are so popular that it is best to book a few hours in advance. On a sunny evening, such a tour is a lovely way to explore the town. 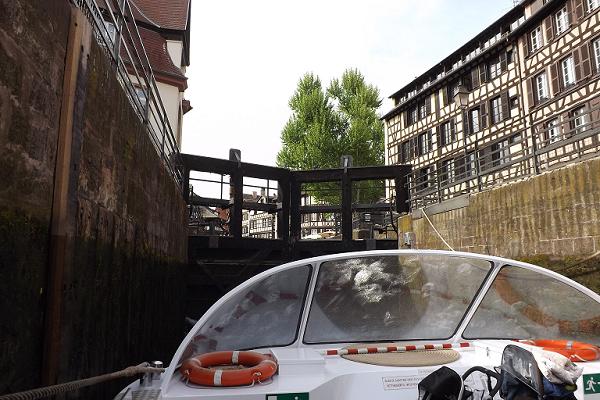 The navigation lock
With the construction of the Barrage Vauban, the Vauban Dam (photos see below) in 1690, the water level changed and made a navigation lock neccesary. Its passage is part of the boat tour. 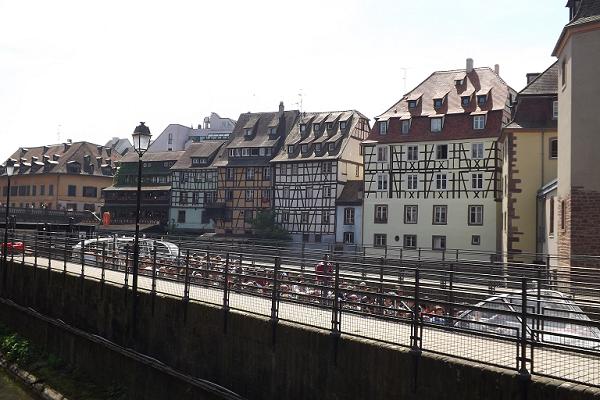 More pretty houses, this time at the lock
The lock is situated in the French quarter. You can see the boat coming up in the foreground, and some more lovely half-timbered houses in the background. 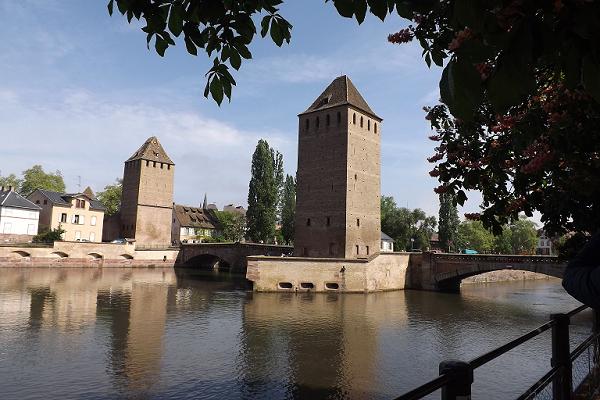 The Ponts Couverts
Most famous among the many bridges connecting the Grand Island with the rest of the town are the Ponts Couverts, once bridges covered by roofs as shelter for bowmen. They are part of the 13th century town fortifications. The four towers that protected the bridges are still intact, but the roofs of the bridges have been removed in the 18th century. 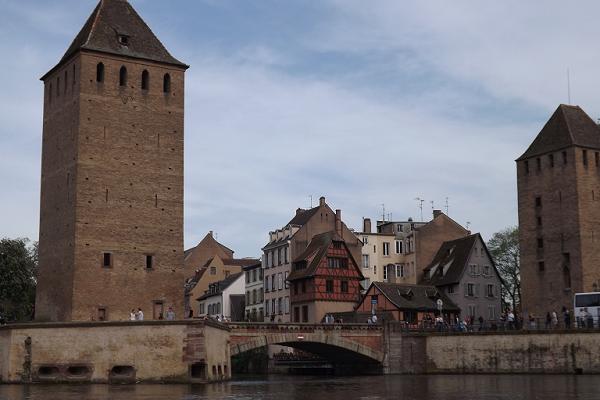 Ponts Couverts, seen from the boat
A system of sluices and timber screens under the bridges allowed a controlled flooding of parts of the town in case of defense. Later, the Vauban fortifications would take over the main line of defense. 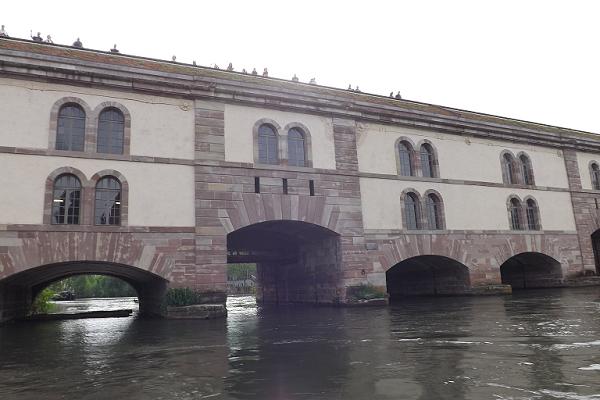 The Barrage Vauban, seen from the boat

The Vauban Dam worked pretty much the same way as the Ponts Couverts; it could be closed by shutters under the archs to rise the water level, which meant that the Petite France would be partly flooded - one would sacrify a poor quater to defend the more important areas around the minster and the Place Kléber. 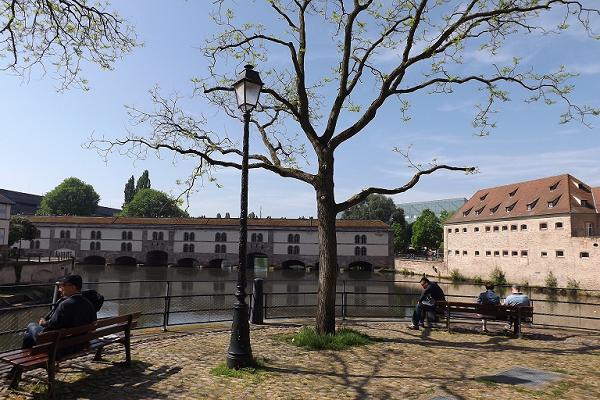 The Vauban fortifications
The dam is named after the famous French general and military engineer Sébastien Le Prestre de Vauban (1633 - 1707). His most importat works - more than 150 in all - were constructed during the reign of King Louis XIV and included town or sea fortifications in Luxembourg, Calais, La Rochelle and Arras. Vauban became Marshal of France in 1703, aged 70. 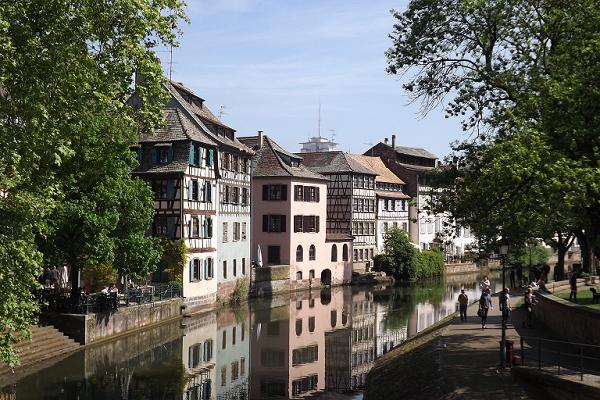 Pretty houses at the Ponts Couverts
The morning sun, the fresh green of spring, and those nice old houses in half-timbered style or coloured roughcast make for lovely photos. I picked just a few out of some 250 I took in Strasbourg for this post. 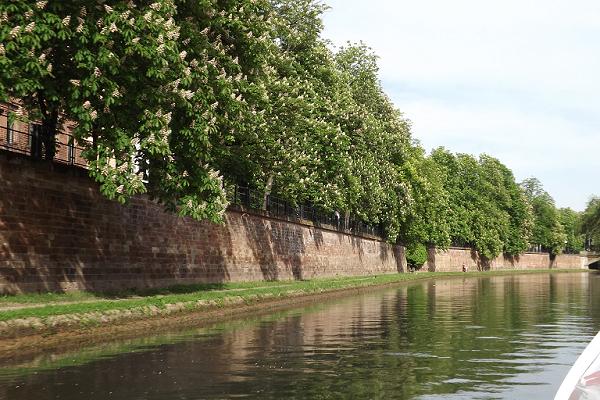 Chestnut trees in bloom along the Ill
The boat tour includes a turn to the European Quarter, else I would not have bothered to walk out there and look at lots of glass. The passage on the Ill along the chestnut alley is really lovely in spring. 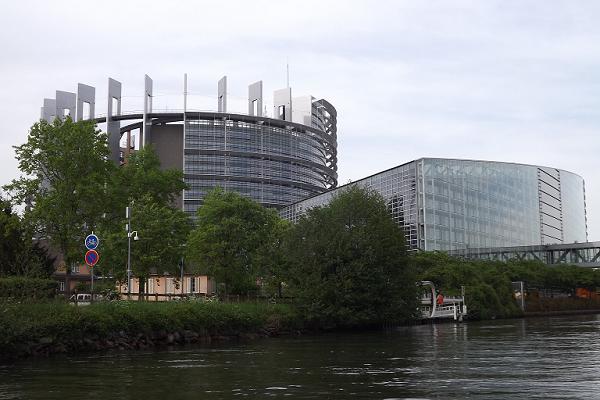 European Parliament
Strasbourg is one of the official seats of the European Parliament. The building dates to 1999 and includes more than a thousand offices, 18 great halls, restaurants, hairdressers and lots of other amenities. During the session weeks, a whole trek of politicians, bureaucrats and administration members travels from Brussels to Strasbourg, including a score of trucks full of files. 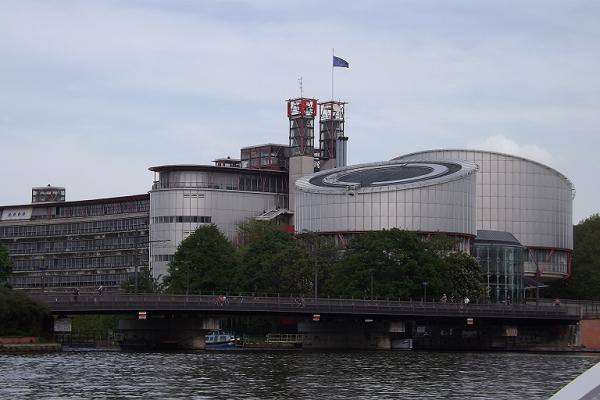 European Court of Human Rights
The aluminium complex (1994) of the European Court of Rights is supposed to look like the scales of justice from above. The angle from the river gives an idea of that though it is not perfect. The main court room covers 860 square metres with 260 seats; there are ten more courts and meeting rooms. 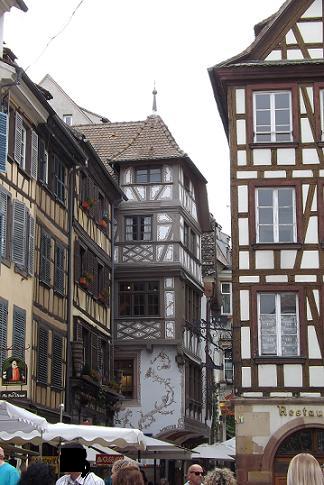 Pretty houses behind the Minster
Those typical Rhineland style half-timbered houses, often with pretty decorations, can be found the in the quarter around the minster as well. My hotel was in that street, but impossible to photograph because the street is so narrow.  ¶ May 21, 2018