4 Aug 2007
Hexham Abbey
Besides Roman remains I also visited some Medieaval sites in Northumberland, among them Hexham Abbey. Here as well as in Carlisle Abbey and York Minster, I met with kind, helpful and well informed staff members who took their time to satisfy my curiosity. 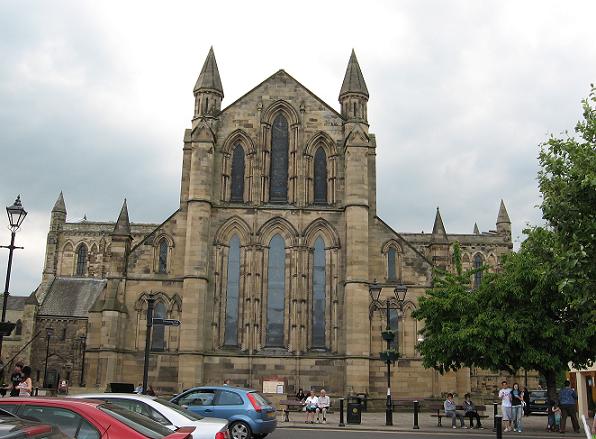 Hexham Abbey, seen from the east

The first church on the site dates back to 672. That year Queen Ethelreda (Aethilthryth - how's that for a name, lol) made a grant of land to Wilfrid, Bishop of York. A few years later Wilfrid got on the wrong side of King Ecgfrith, left England for some years and upon his return was imprisoned for a time. It was no easy job being a bishop then, it seems.

Wilfrid built a Benedictine abbey on the site of the present church. Attempts to reconstruct it from the traces of foundations show that it must have been a pretty impressive building: the long nave slightly narrower than the present one, with aisles on both sides (the basilika style I mentioned in my post about Bursfelde Abbey). Wilfrid's biographer, one Stephen, waxed rather poetic about the church

"...with its crypts of wonderfully dressed stone and the manifold building above ground, supported by various columns and many side aisles, and adorned with walls of notable length and height ..." (text copied from a leaflet I got in the abbey).

The stones were mostly filched from the nearby Roman buildings of Coria settlement (Corbridge), and some give their origins away. More about that in another post.

Today only the crypt remains of the original building. 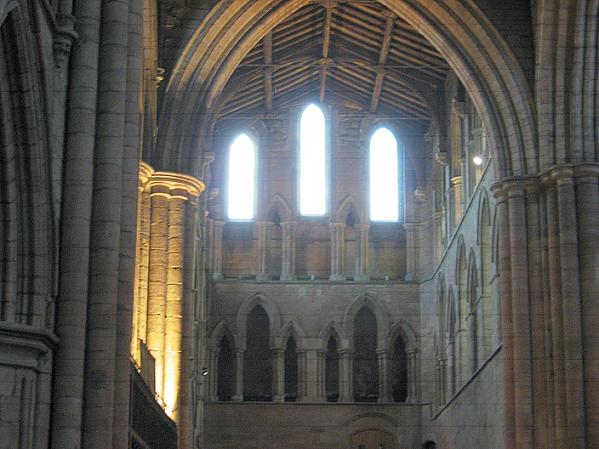 Hexham Abbey interior, upper part of the south transept
The passegeway in the middle led from the former dormitory into the church
In Norman times, Wilfrid’s abbey was replaced by an Augustinian priory. The church one can see today is mainly that building of about 1170-1250, in the Early English style, a variant of the Gothic style (what would be Frühgotik in Germany). The choir and the north and south transepts date from this period. 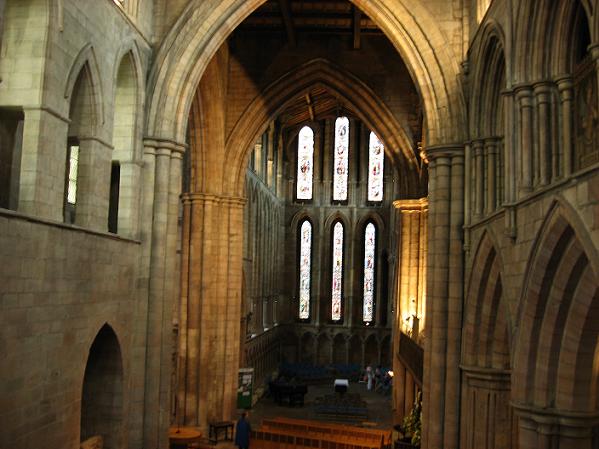 North transept, seen from the passageway in the south transept
Since the church had seen damage over times and part of the east nave had collapsed, the east end was rebuilt in 1860. Other parts of the abbey were rebuilt during the time of Canon Edwin Sidney Savage (1898-1919). His project involved re-building the nave, whose walls incorporate some of the earlier church and the restoration of the choir.

Since the Dissolution of the Monasteries in 1537 the abbey has been the parish church of Hexham and remains so until today.  ¶ August 04, 2007

Comments:
Great pictures, and a very helpful explanation. Thanks for sharing.

I rather think Wilfrid's quarrel with King Ecgfrid was six of one and half a dozen of the other, like Becket and Henry II. But Wilfrid had a better press officer :-)

Carla,
according to the short biography of Wilfrid in that leaflet, his relationship with Ecgfrith must have been something like the Taylor/Burton one, lol. I have to resist the temptation to research things I don't need for my novels (and catch new plotbunnies in the process) but if you have some interesting info about Wilfrid, how about a post in your blog to which I can link? :)

Great info & pics. Thanks! Not mt time period, but interesting all the same.

Do you have one of the Santuary?

Thanks, Constance,
I live to educate, lol.

Hank,
since the church is still in use, the sanctuary isn't open for public.

Great photos. I always wonder how long it took them to build the churches and cathedrals. They're so big and awe-inspiring, especially when you're inside them.

'Above ground"
Interesting - does it mean extensive crypts and cellars below?

OK, I shall look up my notes on St Wilfred when I get the chance. I may be some time :-)

Shelley,
it varied, but building a church often was the task for an entire generation.

Carla,
you have notes? That sounds promising. :)

Lovely photos, Gabriele. I visited the abbey a few years ago - it's a great place.

Aethilthryth: now there's a name to conjure with. ;)

It is - I spend quite some time there. Did you manage to see the crypt?

No, unfortunately not - it was rather a rushed trip, as we only had a short time before our train left. Oh well...one day, I'll go back.