23 Jul 2008
The Local Nobility and Their Castles - Adelebsen Keep
A rather unknown local castle just a few miles from Göttingen is Adelebsen. the only remaining Medieaval structure is the oddly shaped keep - Bergfried in German - the rest of the castle has been rebuilt into a Baroque palace. But the keep is quite impressive. 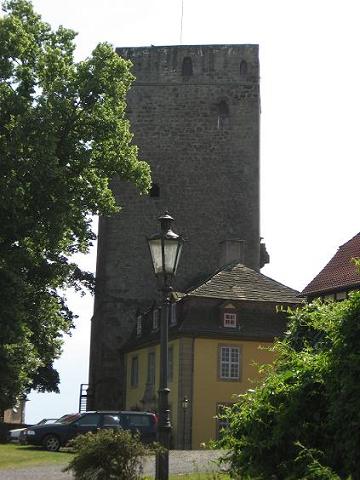 In 990, Emperor Otto III gave the land of Ethelleveshusen, situated on a military way (Heerstrasse), to his sister Sophie. Such places on the main roads were important at a time where the royal court still traveled around, and where troops often had to move at fast speed. The whole system culminated in the King's Highway (Königsweg or via regia) that runs all the way from the Rhine to the Baltic Sea and was king's land, no matter who possessed the fiefs along it, while the military ways tolled to the lord who held the land. He had to care for the upkeep in return. The King's Way still exists as hiking way.

A sandstone promontory rises above Adelebsen which is suited for a castle, and in 1234 the Lords of Wichbike moved from their old land that they held since at least 1111, to Adelebsen and built a castle there. They called themselves Lords of Adelebsen since 1295. Since the land belonged to the Emperor's sister, the fief likely was held directly from the king; a nice catch for a minor lord. 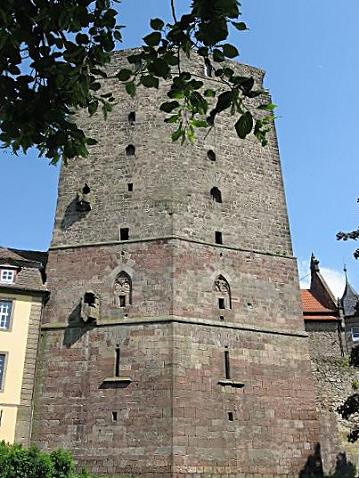 The oldest part of the castle is the keep, 38.75 metres high, pentangular in the lower part and six-sided in the upper part - it looks a bit twisted from certain angles. The walls are up to 4.30 metres thick and the main entrance 4 metres above ground. There had been 9 floors, but today the tower is empty inside with only a wooden staircase that leads to the roof running along the walls. But the keep is only open on special days so I haven't been inside yet. I don't really feel like climbing those open stairs, though the view of the surrounding landscape should be great. 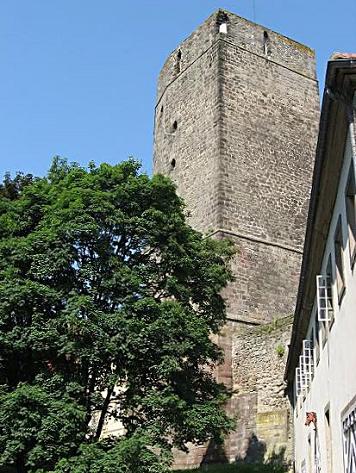 The keep is one of the most impressive in Germany. The rest of the castle was mostly built in the 14th century as well but partly destroyed in 1466, during one of the many feuds between kings and nobles in Germany, and further during the Thirty Years War. In 1650, the castle was rebuilt in a more 'modern' style; and was changed into a Baroque palace in 1740; the trench between inner and outer bailey was then filled up. Several outbuildings were added, like a Hunter's Lodge and a Chamberlain's Office (Rentei, the yellow building in the first pic).

In 1947 the last Lord of Adelebsen gave part of his fortune to a foundation to ensure the castle, both the palace plus outbuildings and the Mediaeval keep, would remain in good condition. Yeah, it's not that much fun to inherit a drafty old tower with rotten floors even if it's been a family possession for 800 years. :)

Already plotting my siege. :) **Note to self** I think we're gonna need a bigger trebuchet...

Great pics! It certainly is an impressive tower - I wouldn't have wanted to mess with whoever was inside it!

I love towers, but they must have been dark inside.

Nice place to get a good night's sleep. Have to leave it to accomplish anything though.

By "anything", I assume toll collecting, bandit hunting, ruling people, invader repelling. I assume there is a back way out?

Constance, in the Middle Ages there was a trench as well. You'll have to fill that up ere you can bring that trebuchet close. :)

Lady D, I bet Edward would still have sneaked out and tried to make his way to another castle, like the Hardenburg. :p

Bernita, I think they were. But it times when glass was still rate, larger windows would have let a lot of wind in - not to mention they make for nices targets once Constance gets that trebuchet of hers into position. :)

Gabrielle, I'm afraid I've tagged you. See if the mood takes you :-)

I bet Edward would still have sneaked out and tried to make his way to another castle, like the Hardenburg.

Alianore, Ed's not such a complicated character. ;)

Great photos, Gabriele! I'm getting plotbunnies just from looking at that thing - and it's not even my favoured era!

It's so unfair. You have so much history around you. The only think historical around here is...well, I can't think of anything off the top of my head. :/

Meghan, I could not live in a country without so much history around. I need it to breathe. ;)

"I bet Edward would still have sneaked out and tried to make his way to another castle, like the Hardenburg. :p"

Especially if Piers or Hughy were there ;-)

Yeah, those three were not exactly military men. Brave surely, but no tacticians or strategists. ;)

Hehe, my tower is bigger than you tower.

I bet something like this was behind all that castle building, besides the military necessity. Those were men, after all. ;)