6 Nov 2009
Soaring Spires - More About Castle Hanstein
Here are some more photos of a castle I visited in 2007, the charming ruins of Castle Hanstein, situated on a cliff high above the Werra river. 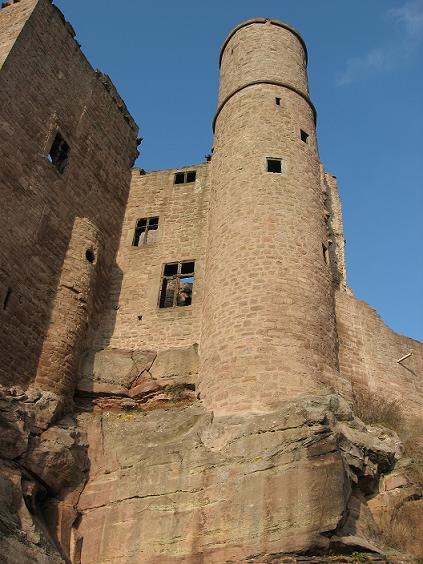 I had mentioned that the Hanstein first appeared in historical documents when the chronicler Lambert of Hersfeld notes that it belonged to Otto of Northeim but was destroyed by the Emperor Heinrich IV during their feud. But Otto obviously didn't lose the property as such and must have rebuilt the castle when he made peace with Heinrich, because it was part of the dowry his granddaughter Richenza brought into her marriage with Lothar of Süpplingenburg. Later it came into possession of their grandson, Heinrich 'the Lion' Duke of Saxony. 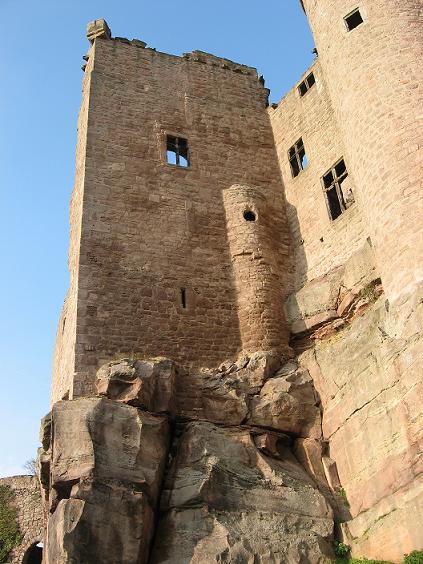 The castle did not play a significant role during the war between Heinrich of Saxony and the Emperor Friedrich Barbarossa, and we don't know Boppo's fate. When Heinrich returned from his exile in England in 1185, he was given back his allodial possessions around Braunschweig and Lüne-burg, but not the duchy of Bavaria and the lands he had held from Friedrich as vassal. Since the Hanstein was part of the inheritance of his oldest son, Heinrich Count Palatine of the Rhine, it must have been an allodial property. During a division of the allodial possessions of the House Welfen in 1202, the castle came to Heinrich the Lion's youngest son, Otto IV.

The next part of the history of the Hanstein involves the archdiocese of Mainz which held lands all over the place, even in Thuringia (the Eichsfeld) far away from the Rhine. Archbishop Siegfried of Mainz was interested in getting his hands on a castle that protected a Werra ford on the way to his possessions farther east. Otto IV, who faced a lot of opposition on his way to become Holy Roman Emperor, needed a favour and thus agreed to give the Hanstein to Siegfried (1209). 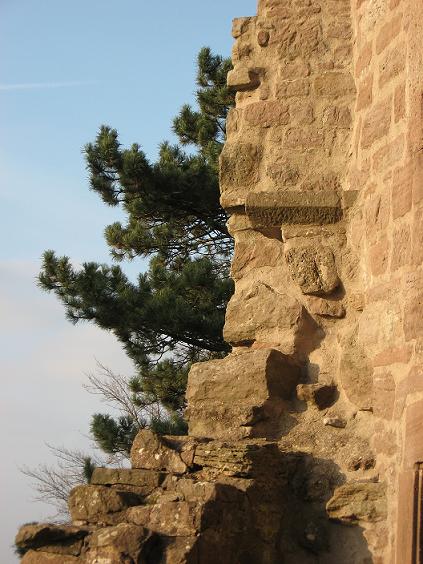 The next time the Hanstein appears a chronicle is 1236 when a vassal of the archbishop of Mainz, one Hethenricus of Hanstein (spelled Hanenstene) is mentioned. His family came from Apolda and was in a feudal relationship to Mainz since at least 1150 when they appeared as bailiffs of lands in the Eichsfeld. The now held the fief of Hanstein and took their name from the place. I don't think they are related to the above mentioned Boppo Count of Hanstein because the archbishop would have prefered to install one of his own vassals in the castle.

A sidenote: The Eichsfeld is still a Catholic enclave in lands that nowadays are mostly Protestant. They get some extra holidays which they spent on shopping tours in the surrounding Protestant towns. I've already mentioned the Eichsfeld in a post about Heiligenstadt, another of those pretty, little German towns with some old churches.

The photos show part of the inner bailey and the palas, sitting on a bedrock cliff. And a somewhat blurry fir tree swaying in the wind.

Comments:
Wow, that's some history - and a pretty impressive tower on that castle too! I wouldn't like to try climbing it!

Those are impressive heights attached to the towers. I'm dizzy just sitting here.

Thank you, Lady D and Barbara. Yes, those towers and the curtain wall are quite impressive.

That's an amazing castle - the way it almost seems to grow out of the cliffs like that. Great photos.

Carla, it's one of the differences between German and Norman Castles. The German ones are built into the surroundings (think of the examples where they use natural grottos) while the Normans plopped most of theirs down where they wanted them and got everything out of the way, lol. Except for Chepstow which makes use of a cliff over the Wye the way the Hanstein does.

Wow, those are great pics of a great castle! The second one especially is giving me vertigo. :)

Maaaan! Do I ever like those cross shaped mullions!

And whats with that cute little detail, the vertical shaft with the unspecified opening (window?) at the top thats tucked into the corner on the middle picture? Looks vaguely like a privy, but it doesn't seem to drain anywhere. A spiral staircase perhaps?

Stag, it is a privy. They didn't have a drain in the Middle Ages; the ahem, shit plopped right down into the moat, or in this case just down the rock.

Wow, looks like someone got to destructing it before I did. *g* Would hate to have been the engineer on that one. Not fond of building over sheer drop offs - we lose more workers that way! *g*

Lol Constance, yep, you and your trebuchets are to late for this one - and difficult to get into range in the first place. You'd need rockets for those towers.