2 Nov 2008
Normanstein Castle
Another castle in former east Germany I had on my list. The name has nothing to do with the Normans, though, and it's not in the scale of your average Norman castle. But it's pretty, and because of more thorough restoration work in the 19th century, more of it has been preserved than with some other castle remains I've visited. 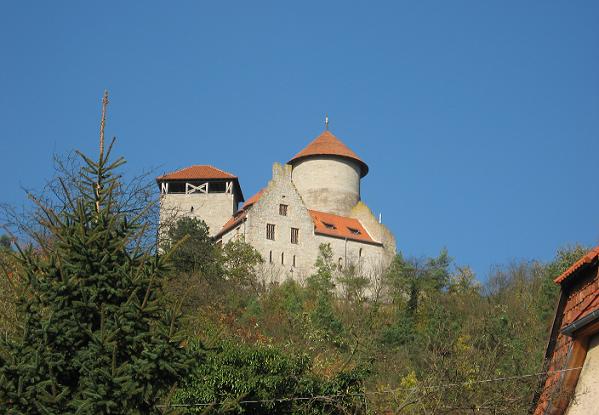 The Romanesque castle, situated above the Werra river to protect the fords and town of Treffurt, dates back to the 11th century. The keep and the two defense towers stand close together in the inner yard; later an outer bailey was added, protected by a wall and trench system. 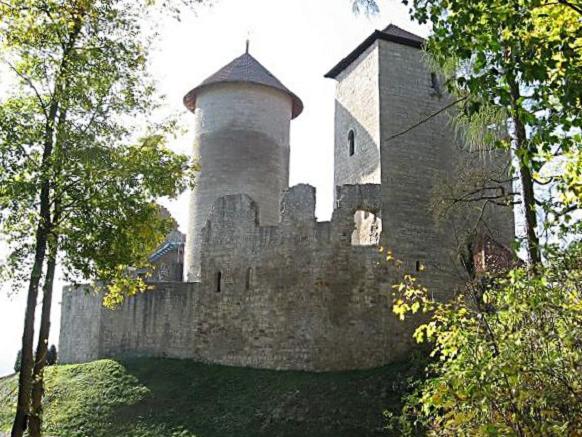 View from the former outer bailey
The Knights of Treffurt were vassals of the landgraves of Thuringia, but in the 14th century their power increased to a point where they were considered a danger by some counts and high ranking clerics. In 1336, the united hosts of Thuringia, Hessia and Mainz managed to finally defeat them. The castle was divided between the victors who governed the town of Treffurt from there. 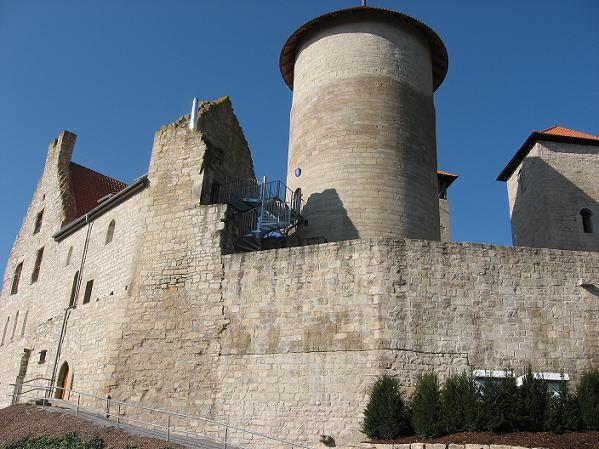 Inner curtain walls
In the 16th century, more modern seats were built for the magistrates, and the castle fell into decline except for round tower which was used as prison. But that way the castle was not altered into a fortress or Baroque palace like it happened with some other places (Regenstein, Adelebsen). In 1894 the castle was bought by Gustav Döring who restored the crumbling towers and established a restaurant in the former crypt. 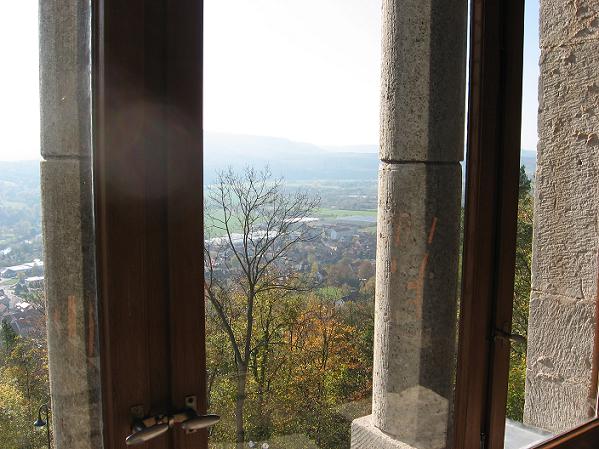 View to the Werra vale from a window of the keep
During the time of the German division the castle served as youth hostel. Since 1996 renovations were going on big style to preserve the ruins as well as the reconstructed parts. Those measures have been finished in September 2008, and so I got to visit a sparkly new castle, lol. There is a restaurant again today, not in the crypt but the former main house.  ¶ November 02, 2008

Comments:
I think Romanesque is my favorite style just because it's plain and matter of fact. Of course I don't like a lot of architectural styles after 1200, so that's not saying much. :P

I would have loved to have visited the retaurant in the crypt - I wonder what sort of food was served?'Dead and Butter pudding?''Bone Casserole?' 'Skull shaped blancmange?'

Loved the pictures. I visit your site daily. As you know, I'm a Canadian novelist writing medieval novels so your pictures serve as inspiration for my work. It's the next best thing to being there. You're blog is the best

Constance, I like Romanesque best, too, though some of the great Gothic churches are a spectacular sight.

Lol, Lady . During GDR times it was bland Konsum food, I'd say. The nice stuff was only for the big bosses. :)

Thank you very much, Mirella. I find it a lot easier to write about places I've actually seen, so I can only guess how difficult it must be for you.
Btw, I have a place connected with Heinrich the Fowler close by, and it's on my list to revisit as soon as there's a nice, sunny autumn day.

What a gorgeous view. I found the idea of an early restaurant interesting, but I suppose people got tired of cooking in those days, too. ;)

Great pictures. And on the last several posts to.

Gabriele - what's the origin of the name Normanstein? Is it derived from something like 'north men', albeit a different set of north men than the ones who gave us Normandy, or is it something completely different?

Thank you, Shelley and Hank.

Lol, Carla. I couldn't find out anything about the origins of the name. The town, Treffurt, goes back to Tri(s)ford (Three Fords) because of the Werra crossings it protected.