5 Jan 2009
Autumn at the Werra / Weser
Autumn is my favourite season, and it has truly arrived here. Not only with the flame coloured leaves and melancholical mists, but also with storms and rain, and the first hoarfrosts.

The Werra, linguistically the same as the Weser (the Roman Visurgis), is another of those typical German rivers surrounded by mountains and fertile plains where the valley widens. It runs through Thuringia and northern Hessia, the ancient land of the Chatti. Like most German rivers, its main direction is south to north to either the Baltic or the North Sea (the Werra / Weser runs into the North Sea). 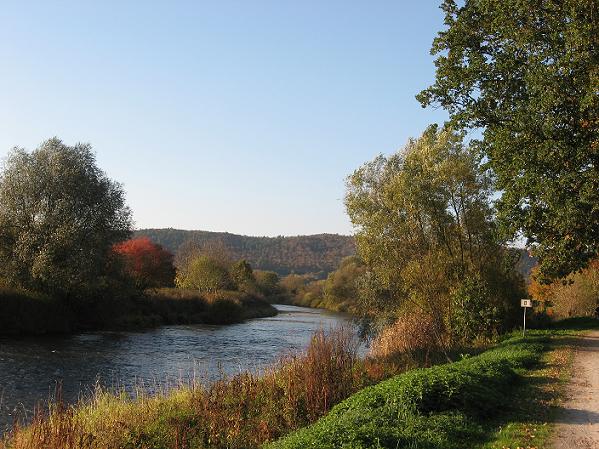 Werra river in the autumn sun

It is an area rich in history as well, all the way back to the Roman camp in Hedemünden close to where the Werra confluences with the Fulda and is then called Weser. 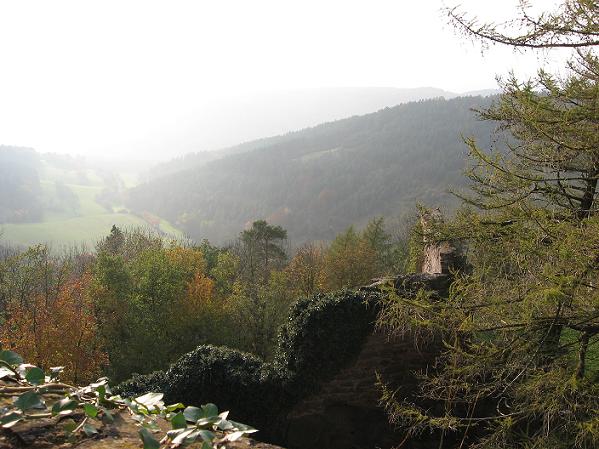 View from the Hanstein
A view from Hanstein Castle overlooking the Werra. I love the warm colours and the soft haze that veils the distant views, the promise of winter in the crisp air. It's a time of melancholy and poems, of breathing more slowly and deeply, of being aware of time. 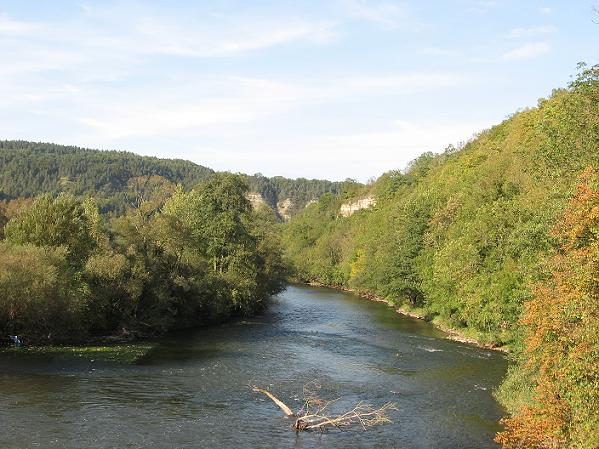 Werra river with limestone cliffs
The dramatic cliffs in the background are shellbearing limestone, carved out by the river during thousands of years. 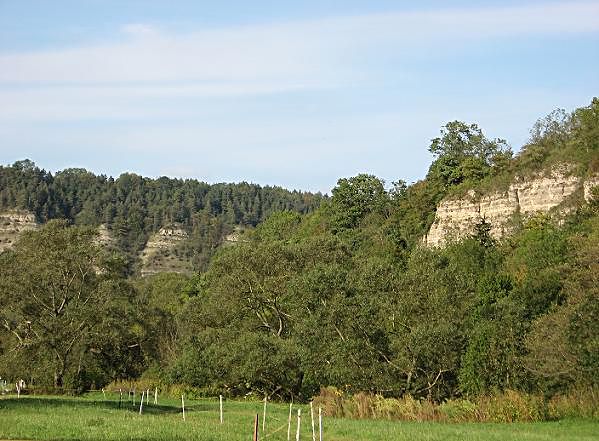 Another view of the cliffs
The place is called 'Werra's Knee', a bend in the river near town and castle Creuzburg (another castle connected with the landgraves of Thuringia - and another one on my increasing list of Posts to Write If I Can Find the Time). 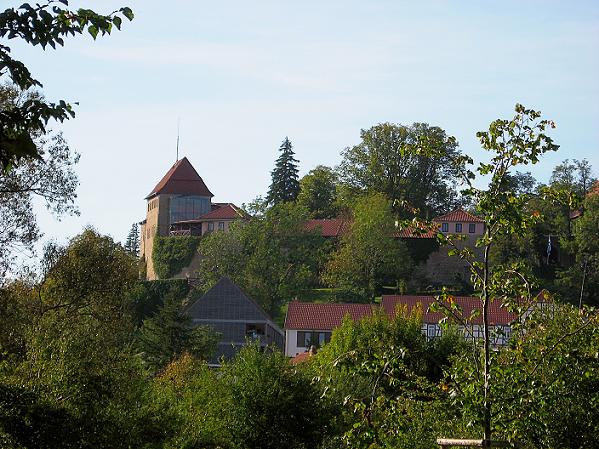 Creuzburg Castle in the evening sun
The Creuzburg is an intact (partly reconstructed, of course) castle that today houses a hotel and restaurant. It has a different atmosphere than those splendid ruins so abundant in Germany, but at least it survived by being in use over time. 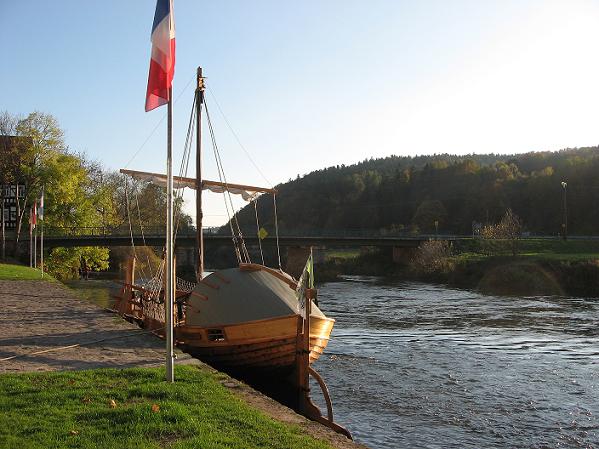 A reconstructed Medieaval boat on the Werra
We came across this reconstructed merchant vessel in the Schlagd, the old harbour of Wanfried. The Schlagd of Wanfried was a change harbour where goods from the ships were loaded upon pack animals and wagons for further transportation. 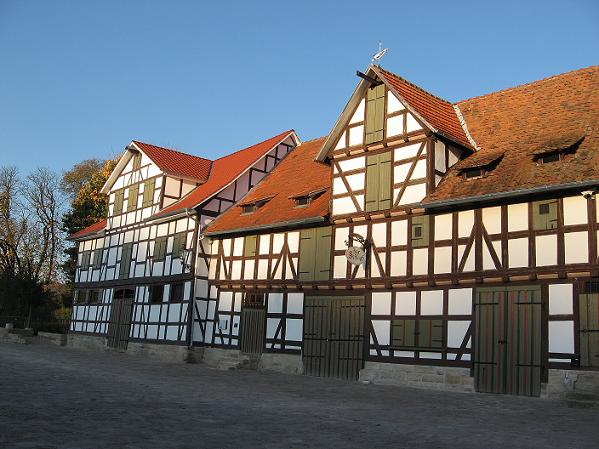 Old guest house at the Schlagd in Wanfried
Today a nice little town on the border between Hessia and Thuringia, Wanfried was involved in several feuds in the Midde Ages. 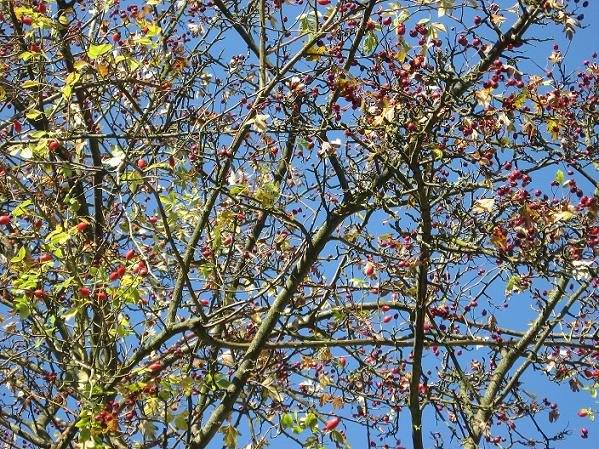 Hawthorne
The photos below are from the part of the river known as Weser, after it confluences with the Fulda in Hannoversch-Münden. 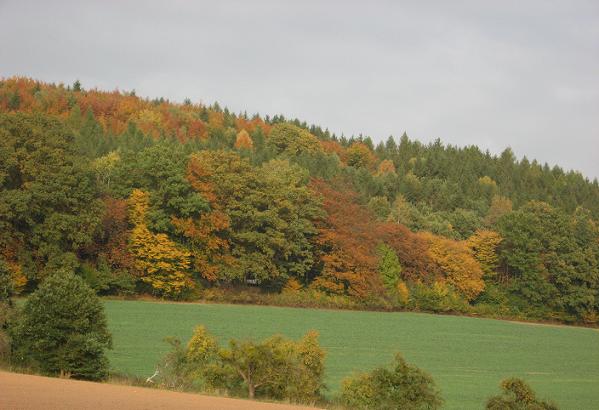 Meadows and woods at the Weser
The fields are plown, the winter wheat starting to sprout. Red and yellow leaves rustle in a breeze still warm with memories of summer. 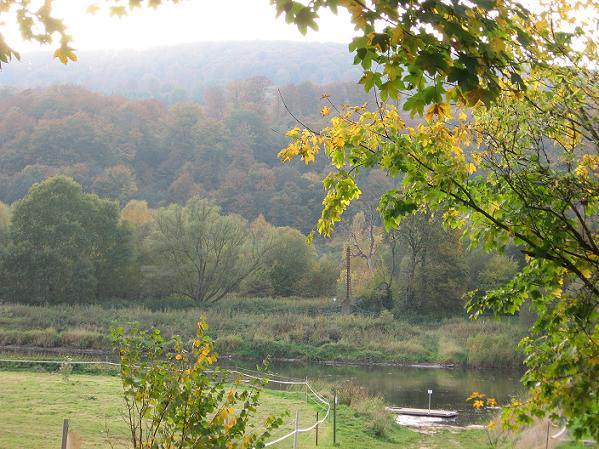 An old orchard
Grazings and orchards down at the river, woodcovered mountains, haze-veiled, rising behind. 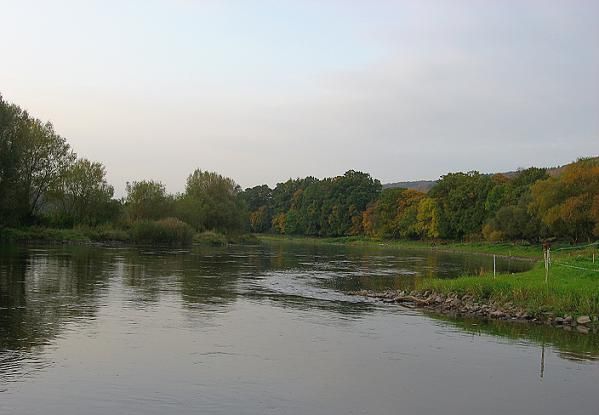 Sunset
I love to just sit and watch the dark waters flow by and the sun vanish behind the hills. And I think maybe Arminius has sat here as well, finding a moment of peace. 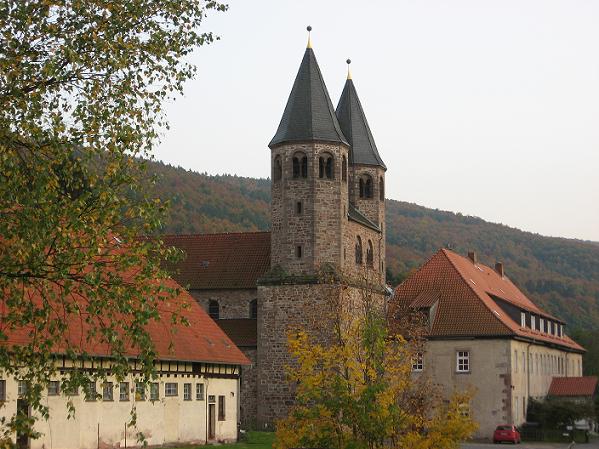 Westwork of Bursfelde Abbey
Traces of the past: the the west towers of the Romanesque abbey church in Bursfelde, surrounded by some former abbey buildings. 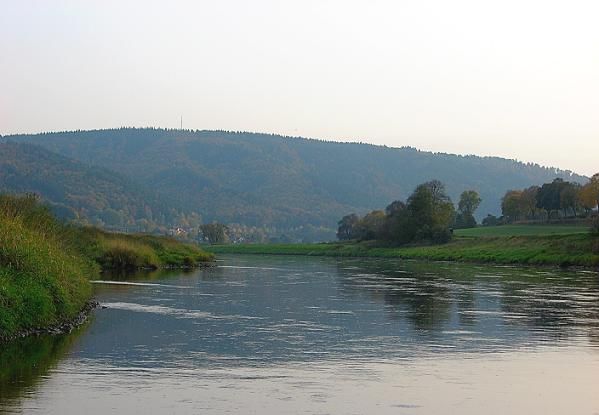 A river of history and myth
The leaves begin to turn yellow and red, and on a hazy day, a golden shimmer lies over the woods. We've had the first autumn gale that sent the leaves dancing and the crows swirling towards the town with angry croaks. Mists veil the valleys in the morning, and the air smells of wet leaves and coming frost. 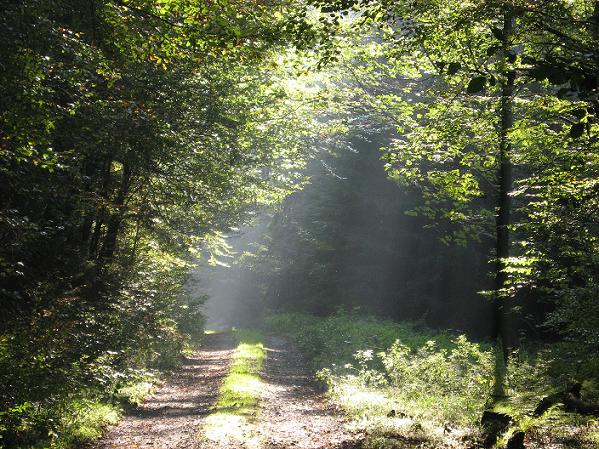 Woods at the Weser
It is my favourite time of the year. Somehow I always wax a lot more poetic when describing fall than spring. Maybe it's the gentle melancholy of this time that responds to my mood, the muted light and warm colours. 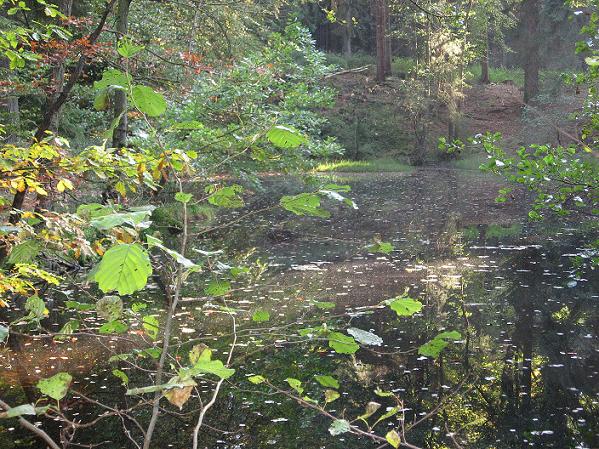 A hidden lake
Of course there are other days, too, days of what one website called Varus weather. Torrential rains and icy blasts that make the ground slippery and bend the branches. Days where you want to stay inside with a cup of hot tea and listen to the rain drops singing on the window panes  ¶ January 05, 2009

Comments:
So far my travel plans include a trip to Orlando and hopefully a trip to Washington DC, so there might be castles in my future (does Cinderella's castle count?). I might be able to get you a copy of the Bastard Prince- but I found out that Katherine Kurtz won't be at MarsCon this year (I was going to try and get it signed for you). Are there any other of her books you need?

Wow, a river that you can't just step over. *g* I'm impressed. I need to come visit some day and get my tree/water/ruins fix. :) Love the reconstructed boat.

Tire of cathedrals and castles and beautiful scenery? Never! Keep those lovely pics coming, Gabriele. You live in a beautfiul part of the world and you take great photos!

Ann, thank you for still thinking about that book. To have it signed would have been nice, but I'll be glad if I can get it at all. Thank you very much.

Constance, you should. Maybe you can officially introduce Corgies to Germany (there are a few, actually, but it's not a widely spread race here) and call it a business trip.

Thank you, Satima and Dark Wolf.

And no, I will never get tired of castles and cathedrals either ;-)

Sick of castles and cathedrals? In a word, no. I love autumn. The photos are lovely.

Lovely photos, and no, I don't get tired of castles and cathedrals :-)
The reconstructed merchant ship looks interesting. Is the river too small to be navigable above Wanfried, or was there another reason why goods changed to land transport there?

Thanks, Shelley and Carla.

Carla, as far as I know the river could not be used by the larger, deepgoing cogs from Wanfried. Another reason, I think, is that some goods needed to be transported along the west-east route from there and no longer on the river. Whatever, the place was important enough for tax income in the later Middle Ages that the landgrave of Thuringia and the landgrave of Hessen-Kassel were at each others' throats about the possession of Wanfried more than once. :)

I never tire of castles and cathedrals. Do you have a sub-list of your posts on Cistercian cathedrals? I'm into that part of my manuscript that needs a bit more description of the churches and their innards.

What a great blog!

I have been looking all over for a photo of a medieval riverboat, preferably from the Weser valley.

Can you tell me from what century the original of the boat you saw in Wanfried might be?