17 Dec 2010
Exhibits from the Cathedral Museum Mainz: Choir Screen Figures
The Cathedral Museum (Bischöfliches Dom- und Diözesanmusem) in Mainz presents a number of beautiful Mediaeval works of art, among them a set of reliefs that once belonged to the choir screen. Choir screens (German: Lettner) are a feature of Gothic church architecture which separated the the area with the main altar from the naves and the congregation. They were elaborately wrought of iron or carved of wood or stone.

The screen in the cathedral of Mainz had been removed in the 17th century (where that feature was no longer felt appropriate) but parts of it were integrated elsewhere in the church which underwent a number of changes and repair / rebuilding during times. In the end, the remains of the choir screen made it into the museum. 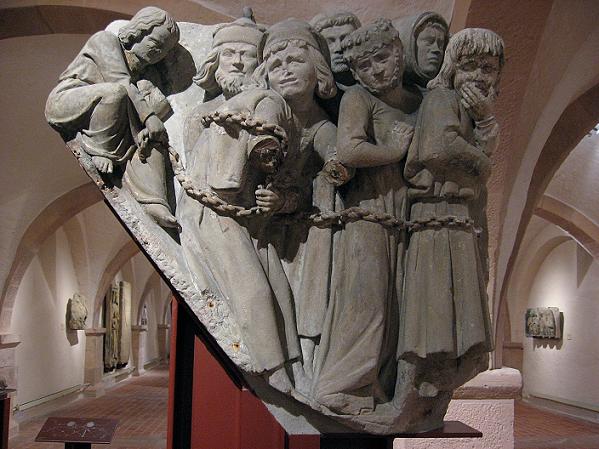 Choir screen, Passage of the Damned

The screen is a work of the Master of Naumburg. His name is not known, but he is regarded as one of the most important artists of the 13th century. He supposedly was educated in France and worked in Amiens and Reims, and since about 1230-1239 in Mainz where he created the choir screen. He then moved to work on the cathedral in Naumburg where several of the figures he created for the choir of the cathedral can still be seen. 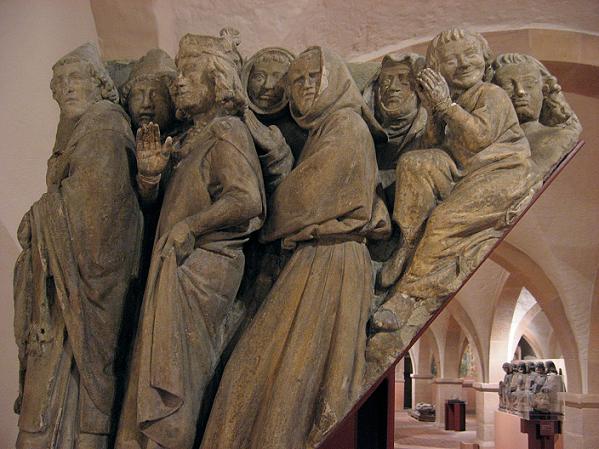 Choir screen, Passage of the Blessed
The Passages of the Damned and the Blessed are part of a Last Judgement scene. The damned are dragged to hell on a chain to the left of Jesus (the Jesus figure is missing) while the blessed go to heaven at his right side. The presentation of the blessed follows the estates of the realm with the pope and a bishop (in the background) first, followed by a crowned emperor, monks and nuns, and a smiling boy who stands for the innocent children Jesus called to him. 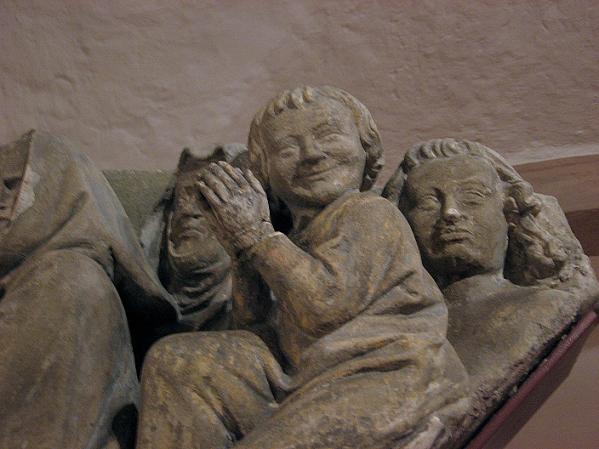 Passage of the Blessed, closeup
Though at close look I suspect that boy wasn't so innocent. His smile is rather smug, more like, 'heh, I always teased my younger brother, grabbed the cat by its tail and filched apples from neighbour's orchard, and I still made it, neiner, neiner.' Makes you wonder if the Master of Naumburg had kids. :) One of the custodians told me the smiling boy is the most popular postcard and poster motive the museum sells.   ¶ December 17, 2010

Comments:
Yes, I agree - I don't think he looks that innocent either! :>

He does look very pleased with himself :-)

Doesn't he? I suspect he still has a stolen apple in his pocket. :)