7 Feb 2011
The Riddle of the Negau Helmet B
The helmet below is considerably older, predating even the Montefortino. It's an Etruscan design from 500-450 BC called Vetulonic or Negau helmet. These helmets are made of bronze, with a comb-shaped ridge across the skull and a protruding rim with a groove right above the rim. They were no longer worn in battle since about 300 BC though. The term 'Negau helmet' goes back to a depot find of 26 such helmets in Negau (today Ženjak in Slovenia) that was discovered in 1811. The proposed time of the helmets' burial is 55-50 BC, some 35 years before the territory was conquered by the Romans.

The 23 remaining helmets can be found in museums all over the world. Several of them have inscriptions on the rim. Now, inscriptions aren't that rare; we got a number of examples from Roman helmets, mostly owner names, numbers of the legion and cohort to classify a helmet as army issue, unspectacular things like that.

Most of the Negau inscriptions were added to the helmets at a later time, assumedly in the 2nd century BC or even later, about 50 BC, and are written in a Celtic language, using a northern Etruscan alphabet. The area where the helmets were found, part of the later Roman province Noricum, was settled by Celtic and Celticised Illyrian tribes in the 2nd century BC, and Etruscan alphabets were still in use then. There are more finds of Celtic texts written in Etruscan alphabets from that time in the Alpes and the Balkans. 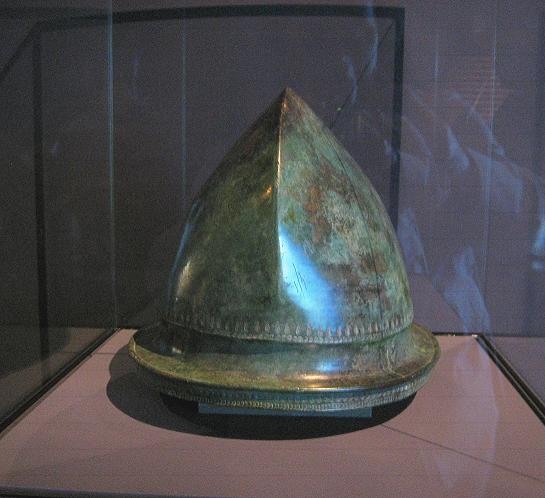 Helmet from the Negau find with Germanic inscription
(Exhibition Imperium in Haltern 2010; loan from the Kunsthistorisches Museum Vienna)

But one helmet, classified as Negau B and today in possession of the Kunsthistorisches Museum Vienna, has a Germanic inscription, also in Etruscan letters. That one's puzzled historians and linguists since 1811 and it's still doing so. The fact that the letters are Etruscan and not Runes is today undisputed (though some similarities between both make the Etruscan alphabets a possible candidate for one of the sources of the Runes). The letters read.
harigastiteiva
The first part most researchers agree on; it's a Germanic name before the first sound shift took place: *Harigasti(z). It consists of two parts: hari (= army, host; the word can be found in Old Norse herjan - to make war, to plunder, hernað - warfare; or in German Heer - army) and gasti(z) (= guest). The name lives on in Hergest and similar forms.

The second part is more tricky. A widely if not unanimously accepted interpretation has been presented by Tom Markey in 2001 (1). He reads it as *teiwa(z) (= god; Indoeuropean *deiwos, also to be found in the Norse Tyr, Anglosaxon Tiw). Thus the inscription would read: "Harigasti, [the priest of] the god".

One argument in favour of this reading are the Celtic inscriptions on the Negau A helmets. Several of those are of the structure: name + 'the diviner', name + 'astral priest of the troop', etc. (since I don't know any Celtic, I've to accept those readings; their Celtic nature at least is undisputed). So the Germanic inscription would follow the same pattern. 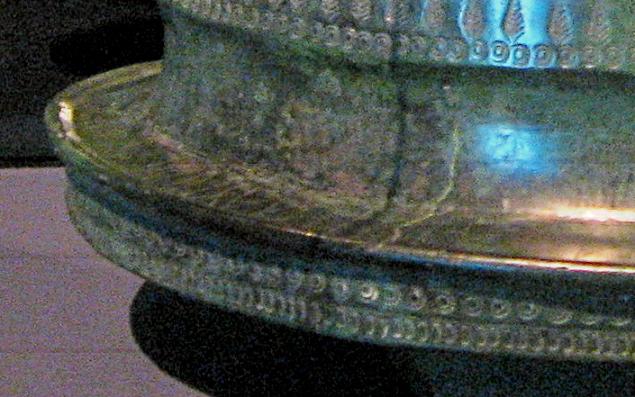 Closeup of the inscription
Those helmets were long out of use as armour so a reason they were kept could be a ritual one; maybe as headgear during ceremonies, as status symbol of a chieftain or priest, something like that. It is also known for both the Celts and Germans to sacrifice weapons and armour, so a deposit find of 26 helmets neatly stacked into each other clearly points at some ritual sacrifice. But were the names carved in by the first owners who decided to use the helmets sometime in the 3rd or 2nd century BC (which would make it difficult to explain the German name), or by the ones who deposited the helmets? The inscriptions then could be interpreted as something like: "X, priest of Y, [gives this to the gods]".

The question remains what a helmet with a Germanic inscription and - in case we accept the reading - a German priest were doing among a bunch of helmets with Celtic inscriptions, and Celtic priests, sharing their ritual sacrifice. It must have been someone respected well enough to be trusted with a (sacred?) helmet, but independant enough to keep his German name and religion; not adapting to Celtic culture.

If we assume the date for the burial of about 50 BC to be correct (though I haven't found bullet proof arguments in favour of that date), there could be an explanation because there was some contact between the Celtic kingdom of Noricum and the Germanic Suebi at the time. 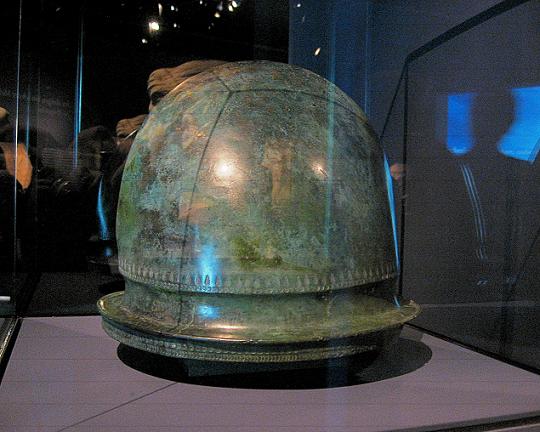 Another view of the Negau B
Geographic and even more ethnographic distinctions are not always clear because the Roman sources tend to be vague about, or simply didn't understand, some of the tribal differences and migration patterns. The Suebi, apparently a conglomeration of several Germanic tribes, are a good example for that. Well, at the time in question, one Voccio was king of Noricum (which had originated in an alliance of several Celtic tribes some 150 years prior), and he married his sister off to the Suebic chieftain Ariovistus because he needed his help against the Boii, another Celtic people that kept causing Voccio trouble. They duly got kicked out of Noricum and were obliged to pay tribute to Voccio.

The only source we have about Ariovistus is Caesar's De bello Gallico, not the most reliable text. But what seems clear is that Ariovistus invaded lands of Gallic tribes west of the Rhine - I guess after the fight against the Boii - that had a contract of friendship with Rome, and Rome had to intervene. Caesar managed to defeat Ariovistus in 58 BC; the remains of the Suebi fled back across the Rhine. Caesar mentions one interesting tidbit about Ariovistus: he had learned to speak Celtic (which was obviously unusual).

The next time we hear about the brothers-in-law is 49 BC, when Voccio sent Caesar troops to assisst him in the civil war. So his connection with Ariovistus hadn't hurt his relationship with Caesar, it seems.

So the Norici and the Suebi had contact at that time. There may have been an embassy to conclude the marriage conditions, and later a troop of the Suebi must have fought at the side of the Norici. One can imagine that a German priest may have been allowed to join the ceremonies; maybe he dictated some Celt his name to carve into the helmet, and thus 'Harigasti(z), priest of Teiwa(z)' left behind the oldest written example of a Germanic language. Though such a scenario must remain speculation.

Evidence here also that Roman equipment was used in the so called dark ages by those wishing to capture some its prestige and power.

Very important point. Some terms may also have had overlapping meanings at the time, which could be distinguished by contemporary readers on the basis of context but which we can't now identify clearly because we don't have the pool of informal common knowledge that would have informed contemporaries. The Roman writers may have been clearer at the time than they are now.

Isotope analysis studies have a habit of showing that people in the past were a lot more mobile than modern stereotypes tend to assume, or at least some of them were. E.g the 'Archer' buried at Stonehenge who grew up in Switzerland, and a burial at Bamburgh (NE England) with an isotope signature consistent with the west of Scotland or Ireland. It seems to me quite likely that 'tribes' were a lot more connected and interacted with each other a lot more than is sometimes commonly assumed, so for what it's worth an explanation like yours seems plausible to me.

Fascinating post, Gabriele. You’d have to think that this helmet with its unique Germanic inscription must have belonged to someone either related by blood or marriage, or of some particular significant power.

As Carla points out there’s evidence of a surprising amount of interaction in the ancient world throughout the Mediterranean and the near East and even further afield to places like Britain. The Greeks, Etruscans, Phoenicians, Egyptians and Celts were all great traders and frequently covered large distances.

I was intrigued to discover just how much the Celts also moved around as mercenaries. They were active throughout ancient Greece, Asia Minor and even Egypt, where they served several of the Ptolemies in this role. They were particularly prized for their horsemanship and in the 4th century BC Xenophon described them acting against the Thebans as mounted light infantry, able to fight on horseback and on foot. Alfred Duggan’s novel,“Winter Quarters”, follows the career of two young Gallic Celts who fight as auxiliary cavalry for Julius Caesar and take part in the massacre of the German tribes, the Usipites and Tencteri.

Paul, that would fit with some Celts keeping the older Etruscan equipment for the same reason.

Carla and Anerje,
yes, people - single people as well as entire tribes - were suprisingly mobile, esp. in Roman times. The whole migration pattern of the Elbgermanan to the Rhine is not yet fully understood albeit the movement must have involved several thousand, if not several ten thousand people. And that happened before the time of Caesar, not during the Migration Period. Plus there were always adventurous people who got around (Celtic mercenaries among them). When I read about that helmet inscription, the writer in me tried to come up with a possible story, lol - as historian I should only have stated the facts, but that's boring. ;)

Gabriele, that's why we love you novelist types- you make history come to life for the rest of us :)

26 helmets neatly stacked into each other...

... makes me think immediately of Asterix and Obelix (because I'm a serious academic historian, obviously). Is that find old enough for Goscinny to have found it in textbooks as a Thing Celts Did or is it just a beautiful coincidence?

Jonathan, I don't know if it's coincidence or something Goscinny read somewhere. I don't know how extensive his research was though the comics are more correct than some History Channel reports I could mention, so he probably did his homework. ;)