13 May 2011
The Ebersburg - Part 3: Remains of a Romanesque Castle
The last post about the Ebersburg will deal with the architecture. Thankfully, there is a group of people dedicated to researching the castle and preventing further decline: They've put up a very informative website from which I took the details about the assumed layout of the castle before the better part of the stones, especially of the outer works, disappeared in mud and shrubs. Those brave guys and girls dug a lot of them out of their hiding places during the last years. 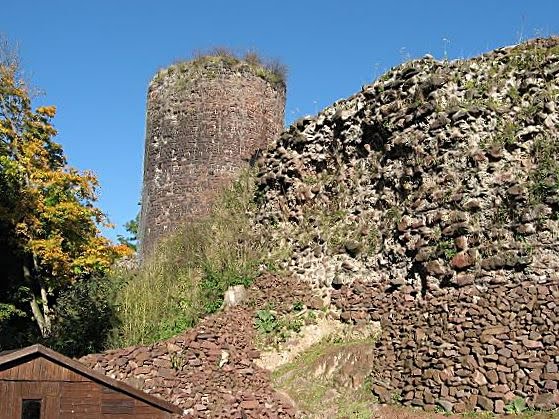 Inner curtain wall (with the keep in the background)

The castle encompasses a walled-in forework, and an outer and inner bailey, the latter consisting of two parts. The German words Unterburg and Oberburg would better translate as 'lower' and 'upper' bailey, since the Ebersburg is one of those German hilltop castles that are built on several levels (while the Wartburg fe. is situated on a sufficiently large promontory for the outer and inner bailey to be on the same level, others like the Plesse are built over two or three levels).

Each part of the castle is separated from the others by walls and trenches, with the keep as innermost and last defense. 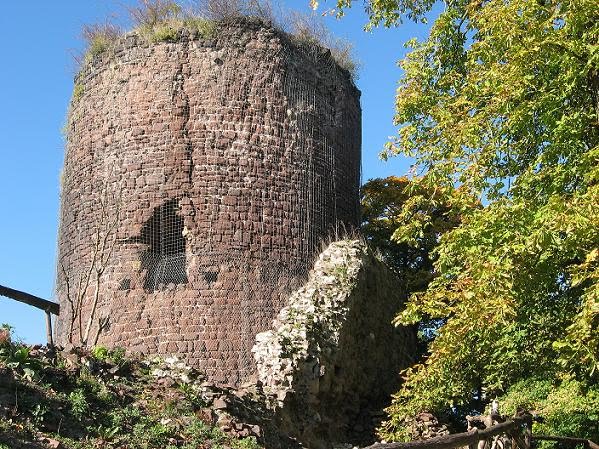 Closeup of the keep
The lower bailey measures 20 x 50 metres, the upper on 23 x 60 metres. The keeps stands at the most vulnerable point, thus adding a significant obstacle to the defenses. The keep is still almost 19 metres high today and must once have been even higher. It is 12.60 metres in diameter and its walls are 4.50 metres thick (which won't leave that much room inside). Not an easy nut to crack with 13th century siege equipment, not to mention that it won't have been easy to get a trebuchet up the mountain and then find a good spot to set it up. Slopes don't work for that.

The keep is covered with a wire net today to prevent loose stones from tumbling down. There are plans to renovate it and make it accessible for the public again. 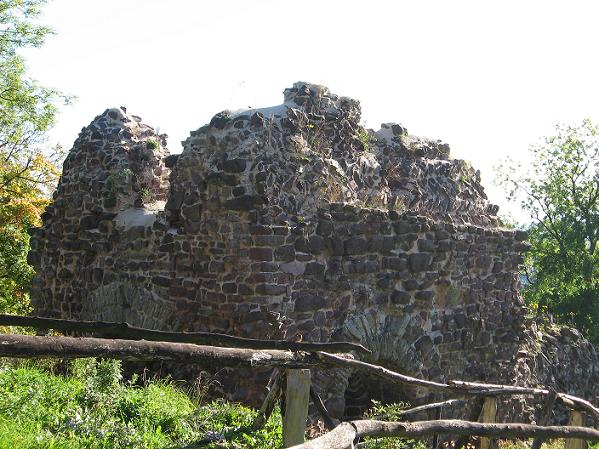 Gate tower
The keep as well as a number of other parts of the castle consist of a quarry stone / gypsum mortar kernel (you can see some of it on the first photo) faced with porphyry stones from a local quarry, which gives the remaining walls their pretty red colour. Another material, mostly used for decorative elements, is shellbearing limestone. Some fragments still show a herringbone pattern, a decoration dating back to the Romans. It's a pity so little remains of the palas because that would have been the most representative building and we could get an idea just how much craftmanship was put into a castle that, after all, was visited by the landgrave on occasion. What we can say is that there's been a symmetry in the lay of the various, elegantly curved curtain walls. 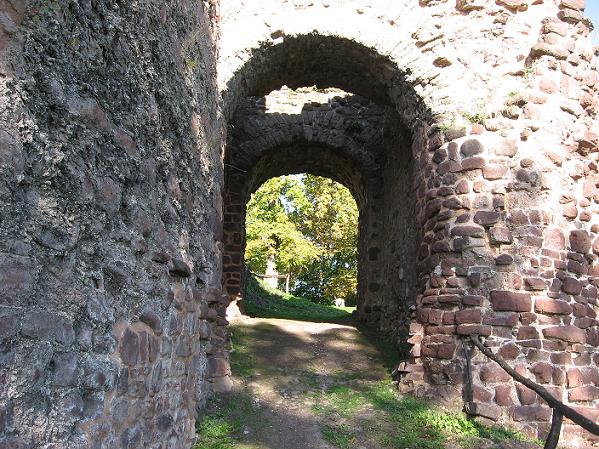 Inner gate seen from outer bailey
The inner gate is interesting. It looks a bit like the clavicula gates one can find in 1st and 2nd century AD Roman forts. The inner curtain wall is drawn into the bailey, thus forming a hallway that ends with a gate tower (3.1 x 3.1 metres). A gate like that could be easily defended because the garrison on the battlements could reach every angle in front of it with their missiles.

Today there's a gap in the roof of the hallway that makes for an interesting motiv (the roofs had been covered with slate - which is found in the Harz - and some with tiles, btw.). 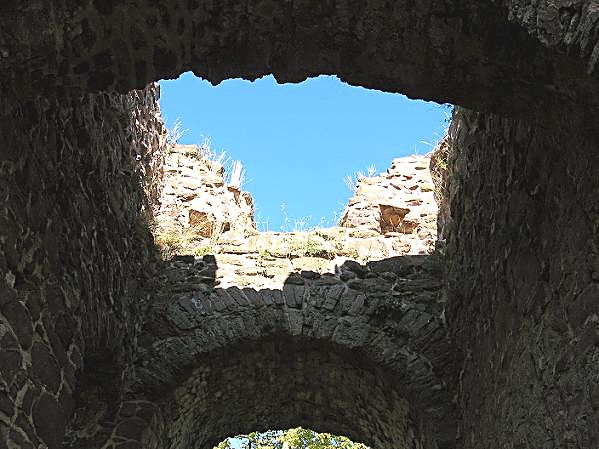 The hallway of the inner gate
While parts of the castle can be reimagined with help of the remains, and we got an idea of the layout of the defenses, many details remain unknown so that it's not possible to draw an image of the entire castle as it may have looked. One of the riddles is the water supply since so far neither a well or a cistern have been found.

The members of the Medium Aevum Vitale Society Nordhausen have their work set out for the years to come, and I hope they will get enough money to be able to fulfill their dream to restore the keep and maybe other parts of the castle. The Ebersburg is worth being dragged out of oblivion.  ¶ May 13, 2011

Beautiful, what a waste to let it crumble away.
http://woodsrunnersdiary.blogspot.com/

From the photo on the link I think you meant the outer bailey is 20 x 50 meters.

Le Loup, the GDR government is to blame for some of the decline. They only put efforts to upkeep old buildings in some prestige cases (Wartburg) and let the rest fall further apart - and most of the castles weren't in a good shape to begin with. Ebersburg and Hohnstein castles are two exmples where some dedicated people initiated repair work post GDR-times.

looks like it's really crumbling badly. I hope they are able to save it.

Great pics. I'm so glad there are people doing their best to look after Ebersburg.

Anerje, I hope so, too. There's never enough money for the upkeep of historical sites, alas.

Kathryn, I'm glad, too. One of the things they do, besides research and preservation, is to keep the place safe for visitors by putting up fences along the dangerous slopes and setting up stairs in some places for easier access.