27 Jun 2011
'Twas King Arthurs Table Once - The Amphitheatre in Caerleon
Since gladiatorial fights, play performances, and the occasional public execution were so popular with the Romans, it's not that difficult to find the remains of amphitheatres. After the earth and timber one of Birten that may date as far back as Augustean times, we'll visit another one attached to a legionary fort, the stone and timber amphitheatre of Caerleon, dating to AD 90. In a lose series of blogposts, we'll move on to the grand 2nd and 3rd century stone amphitheatres of Trier and Chester, and finally visit the partly reconstructed one of Xanten, as well as the remains of the stage theatre in Mainz. 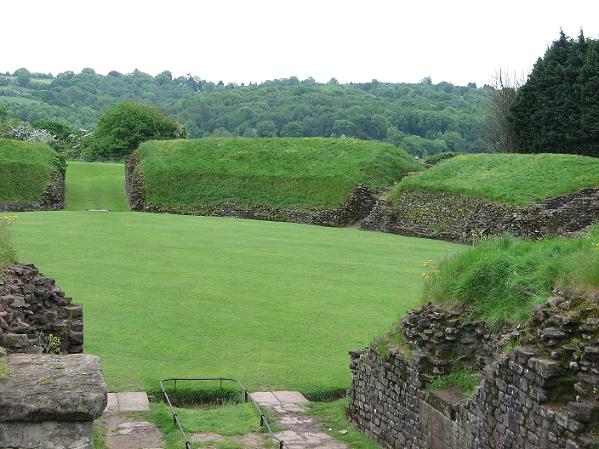 The amphitheatre of Caerleon is one of the prettiest today because the arena and the remains of the earthen support walls are overgrown with grass and make for a nice green oasis even on an overcast and dreary day.

To explain the title of this post:
Caerleon, the 'City of the Legions', has been connected with King Arthur since Nennius, author of the Historia Brittonum (~ 820, though the date is not undisputed) mentioned the place as localisation of one of the tvelwe battles the dux bellorum Arthur fought against the Saxon invaders (the most famous one is Mount Badon). 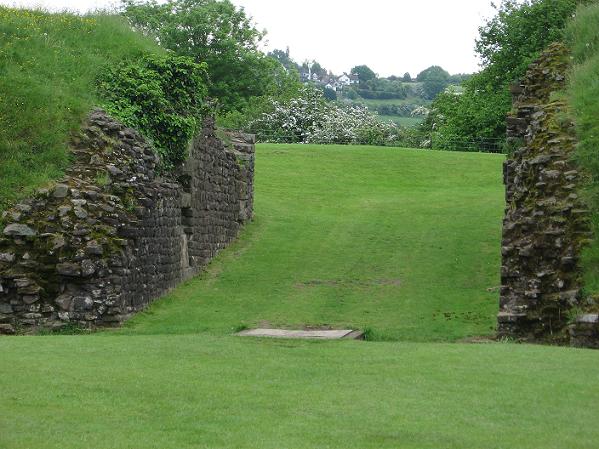 Remains of the southern entrance (seen from the arena)
Geoffrey of Monmouth, who was born not far from Caerleon, gives us a lively description of the City of the Legions in his Historia Regum Brittaniae (1136). After he has not only defeated the Saxons, but conquered Scotland, Orkney, Ireland and even Norway, King Arthur holds court at Caerleon to receive hommage of the princes and warlords. Monmouth describes the situation of the city, the river Usk and the meadows and groves surrounding it. At that time more Roman remains had been visible than today, as a visit by Gerald of Wales in 1188 proves. He doesn't make a connection to Arthur, but he mentions a tower, the baths, and the many subterranean passages and hypocausts.

The French verse adaption of Monmouth's Historia, de Wace's Brut (1155), introduces the Round Table. The table had been connected with the remains of the amphitheatre when some of the French who came in support of Owain Glyndŵr, visited the site, and an Elisabethean poem makes the same connection (Thomas Churchyard, The Worthines of Wales, 1587), albeit at that time a good deal of the stones had, erm .... migrated to the nearby houses. 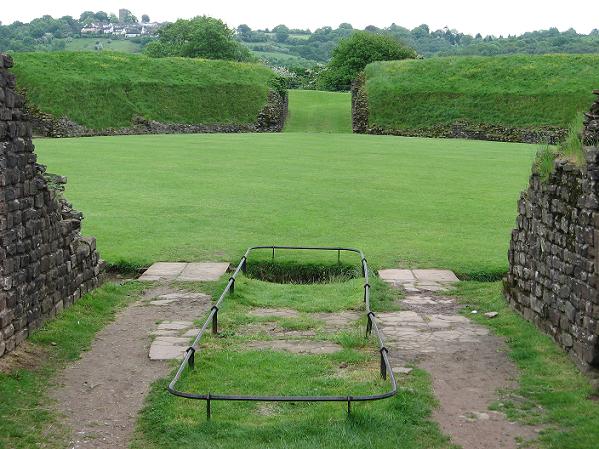 Northern main entrance (with remains of the original pavement)
Caerleon, to the Romans knows as Isca Silurnum, was founded by S. Julius Frontinus, one of Vespasian's generals, in train of his conquest of the Silures AD 74 or 75. Isca was a legionary fort garrisoned by the Legio II Augusta - albeit not always in full strength - until about AD 290 when the fort was partly dismanted.

The fort lies in the territory of the Silures (let's show those pesky Welsh what a badass Roman army looks like), on a gently elevated plateau close to the river Usk, so that the garrison could by supplied by water - we know from my post about the Roman transport on the Rhine how important that was.

As usual, the fort attracted a cannabae legionis. The amphitheatre was situated in the settlement, near the public baths for the civilians. 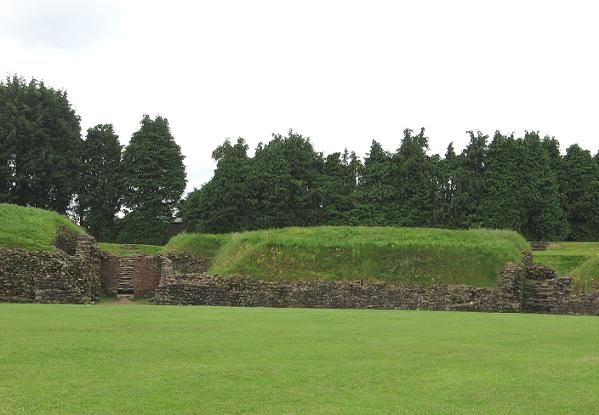 Inside view
The amphitheatre dates to about AD 90. The legionaries had to wait much longer for that than for their baths; those were built the same time as the fort itself. The construction is interesting: a stone foundation of 4 metres height, filled with earth - the outer wall was 2 metres thick and buttressed to resist the pressure of the earth; the buttresses were repaired and reinforced several times. The outer layer of the walls was finished with smooth plaster decorated with red lines, imitating regular stones.

Above this was an open-framed timber grandstand with the wooden seating. It is assumed that it originally had been intended as temporary, but the amphitheatre never was completely rebuilt in stone, for whatever reason. It could hold 6000 spectators, that is, the entire legion plus guests (and the legion was rarely in Caerleon in its full strength, detachments would have been sent elsewhere). 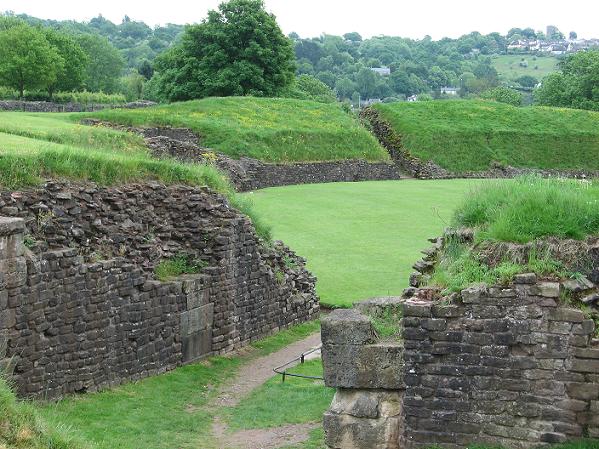 North gate, from a different angle
The arena itself, somewhat below the outside ground level, is an oval of 56 x 41.5 metres, about the same size as Birten, though the latter looks much smaller today because of the trees and the partly collapsed earth walls. There were eight entrances; the ones on the long axis (north and south gates) were larger portae pompae through which processions and parades could march. They were vaulted on both ends, but the ceiling in the middle was left open (makes you wonder if the governor, emperor or whoever commissioned the building got short of money halfway through). Those entrances did not give access to the seating.

The entrances were paved and the arena covered with fine sand; grass would have been way too slippery, esp. in wet Wales. There also is a drain running all the way from the north to the south gate and further down into the Usk river. The drain still works today. 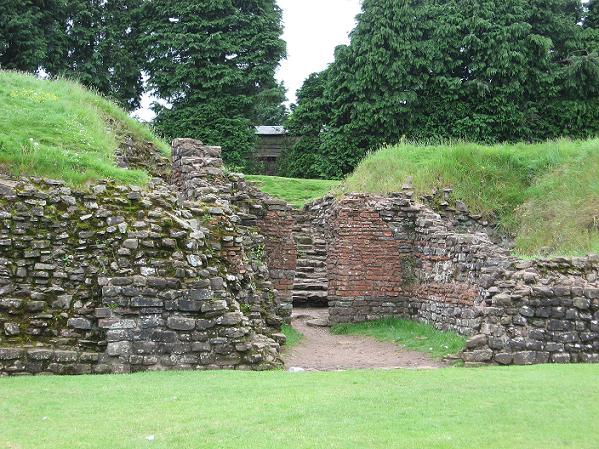 Western entrance with 'gladiator cell'
The spectators would use the six remaining entrances. The entrances on the short axis had cells above the gate, between the staircases leading up to the seatings on both sides of the entrance. Those had access to both the outer staircase and the arena (by another small staircase) and held the gladiators or animals. The two gates also had a terrace and a private room above the gladiator cells at the inner stone wall level. Those were occupied by special guests.

The gate vaults were made of stone, but most of the inner construction was made of bricks. The brick wall of the 'gladator cell / animal pit' in the western entrance can still be seen. For some reason, the entrance was filled up to outer ground level during the renovations under Caracalla (AD 212), and access to the left staircase was blocked, which resulted in the gladiator cell opening only towards the arena. Today the level is back at the original one. 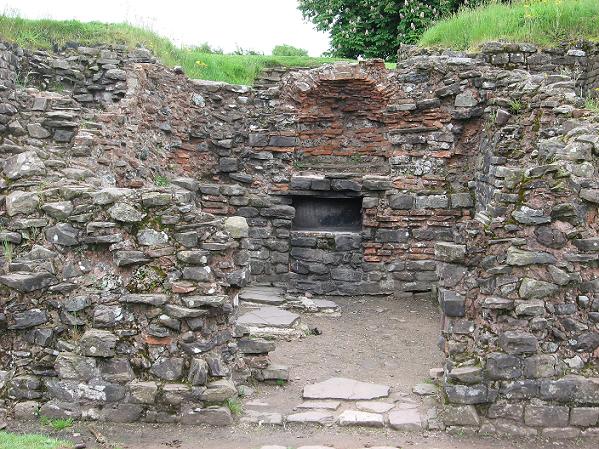 Eastern entrance
(The brick niche is visible above the remains of the arena gate)
The eastern gate was altered even more. During a renovation taking place around AD 125, one of the staircases was blocked and the gladiator cell was partly walled in and furnished with a counter for a ticket collector. I have no idea where gladiators and animals were kept at that time during the hours before they entered the arena.

Later the ground level was filled in, and a brick niche was inserted in the gladiator room which is assumed to have held a shrine dedicated to Nemesis, the goddess of fate and vengeance who was very popular with the gladiators (the arena in Chester has a Nemesis shrine as well). A leaden curse tablet asking Nemesis to do ill to the thief of a cloak and a pair of boots has been found on the site.

The 'chamber for honoured guests' must have been situated above the shrine. 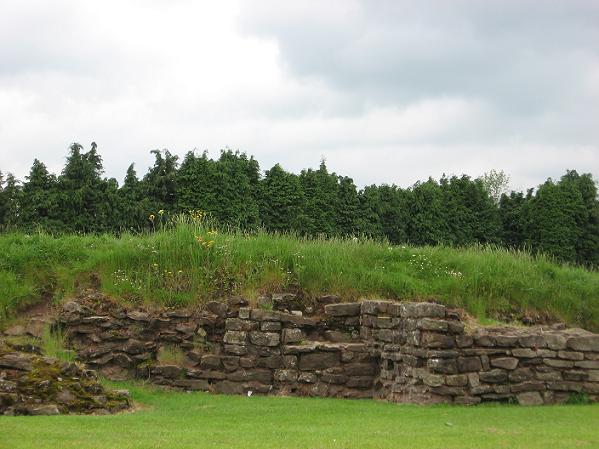 Outside buttresses
The town of Caerleon had for a long time occupied but part of the former fort, but in the early 20th century, it threatened to extend further onto Roman remains. Fortunately, interest in the old remains grew, and a local excavation commitee was set up, led by the director of the National Museum of Wales, Sir Mortimer Wheeler. Wheeler started media campaigns to fund an excavation of the amphitheatre and buy Prysg Field where he assumed parts of the Roman fort could be found and which was going on the market as building land (it now shows the remains of some fort barracks). Excavations at the amphitheatre took place in 1909 and again 1926-27.

Today, the amphitheatre in Caerleon is the best preseved in Great Britain.

Comments:
Great post and some very nice pics.
Silchester has a very well preserved Amphitheatre, as it over time silted up and became a large pond.

Thank you, Paul.
Something like that happened with the amphitheatre in Trier, where the rise of the groundwater level preserved the timber structures under the arena in wet sand.

Nice pics. I can see how things might have been very clearly. :)

Really interesting post and great photos (as ever). Caerleon shares the name 'City of the Legions' with Chester, whose seventh-century name was Caerlegion in Brittonic and Legacaster in Old English, according to Bede.

Your images are just stunningly soothing :) It made me relax just staring at the images. You have my thanks!

Pretty certain Nemesis and Haephestus are my household dieties....

Yay! Yet another Welsh place on your blog! Caerleon has a brilliant education centre. It's well worth a visit.

Wow, I'd love to visit this sometime!

Carla, the Romans seem to have remained British memory for quite some time.

Jeff, thank you for your kind words.

Stag, Haephaistos I can see, but why would Nemesis be after you?

Anerje, it's a charming place indeed.

Kathryn, you should. You probably could combine Caerleaon and Chepstow Castle, and you totally need to see that one. ;)

There's been speculation for some time about the use of ampitheatres in post-Roman Britain as fortified sites of power, and the ampitheatre-as-round table does seem a possibility.

Last year historian Chris Gidlow came up with the theory that the ampitheatre at Chester was Arthur's Round Table. "In the 6th Century, a monk named Gildas, who wrote the earliest account of Arthur's life, referred both to the City of the Legions and to a martyr's shrine within it," he explained. "That's the clincher. The discovery of the shrine within the amphitheater means that Chester was the site of Arthur's court--and his legendary Round Table."

Only problem, as several people pointed out, was the fact that Gildas apparently never mentioned Arthur at all, much to the frustration of Arthurian scholars trying to establish Arthur's historical existence :)

However Carla's mention of the similar original names of Chester and Caerleon is food for thought in this case.

Annis, he fortification theory would work better for Chester indeed, since Caerleon was partly built of wood. But it still seems more likely that if Roman remains were used, a king would refortify parts of the legionary fortress - its layout an inner buildings are much better suited for the hall of a king and lodgings for his warriors.

So there's been a martyr in Chester, too? Seems amphitheatres attracted those, lol.