10 Dec 2011
From the 'Mediaeval Fun' Files
This charming litte wood carving is a detail from the choir stalls in Roskilde Cathedral in Danmark. They date to 1420 and show scenes from the Creation to the Last Judgement. This particular one is the scene of Cain slaying Abel, his interview with God ('And the Lord said unto Cain, Where is Abel thy brother? And he said, I know not: Am I my brother's keeper?') and God cursing Cain.

The weapon Cain uses is so very Scandinavian. *grin* 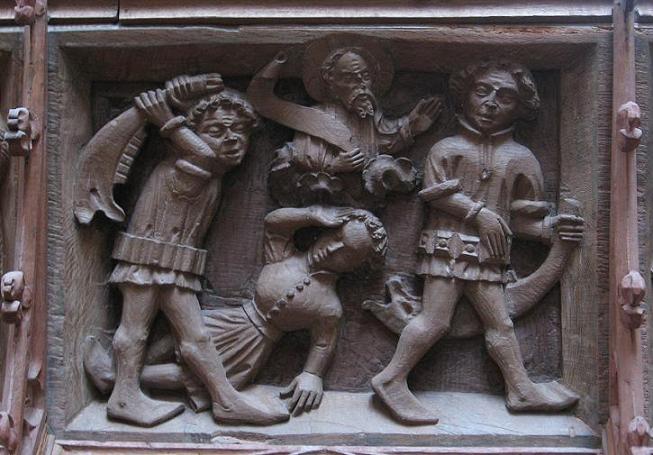 Yes, it's a stockfish. You gotta love how Cain not only kills his brother with a dried cod, but also drags the thing with him when he sulks off.

Of course, stockfish isn't hard enough to kill someone with, but the scene shows how important the stockfish trade was in the Middle Ages, esp. during the high time of the Hanseatic League. Fish was food allowed during times of fasting, and drying the fish in the air was one of the easiest methods of preservation. Stockfish will keep for several years.

Even today you can see stockfish racks (hjell) on the Lofote Islands and the coasts of northern Norway. Some of it is used in Norway itself, but most of the stockfish is sold to Italy, Croatia, and Africa. 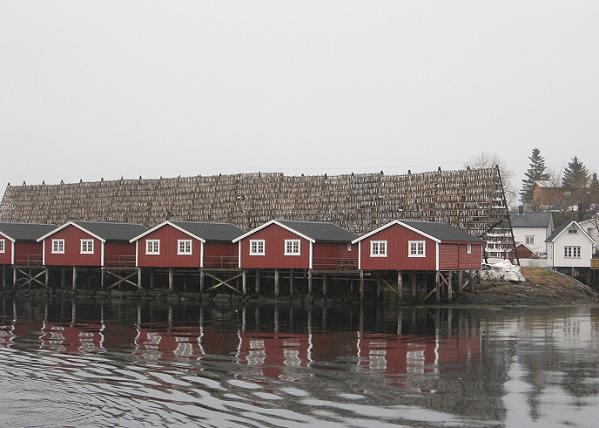 Stockfish racks on the Lofote Islands, with rorbuer in the foreground
Rorbuer are former fisherman's huts. A lot of them have today been re-equipped as comfortable self catering holiday cabins.

Stockfish season starts in February. The cod is beheaded and cleaned off its intestines, then hanged up on the racks in pairs by the tailfins. The snow will protect if from insects, and the average temparature, slighlty above zero °C, is the best for drying cod. During the next three months the salty air will ferment and dry the fish which is going to lose 70% of its water, but keeps its amount of calcium, iron, and vitamine B.

One of the reasons stockfish is no longer so popular in Scandinavian cuisine is the fact that it has to be watered for a week in a cool room, and the water has to be changed daily. That's more work than most people are willing to put into the preparation of their dinner today. 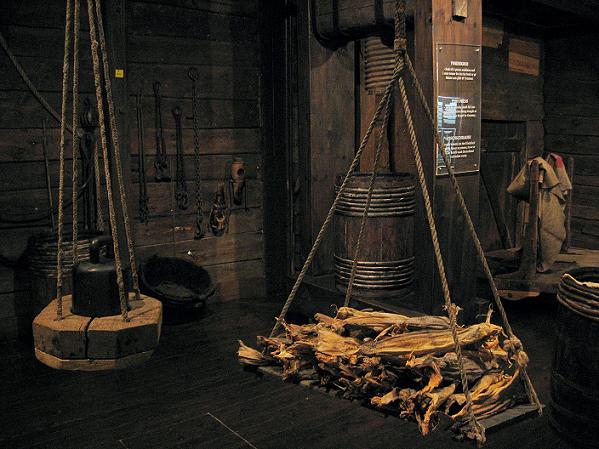 Some stockfish in the Hansa Museum in Bergen
The bundle of stockfish is real, btw, and the room was filled with a distinct odour - not unpleasant, but strongly ... maritime.

Export of stockfish (to England) can be traced as far back as 875. Stockfish was Norway's most important export article already in the 11th century. King Håkon IV Håkonarson (1217-1263; the one who died shortly after the Battle of Largs) then gave the town of Bergen the exclusive right of trade to the north, that is, all trade from the towns and villages north of Bergen, including the Lofote Islands, had to go via Bergen; the fishermen could not sell their wares directly. Bergen would remain the trade centre of Norway for the next 800 years. The king and the church would get a fair amount of taxes, thought the kept quarreling about who was going to get how much.   ¶ December 10, 2011

Comments:
I was sitting here thinking - 'he's not holding a fish, is he?' - and he was. LOL! What a fun interpretation!

My grandmother's Italian cookbooks have recipes for preparing dried cod.
Never been interested... :)

Dried cod is wonderful. Salt cod is better though. Dry codfish is uncommon even today, but salt cod is easy to get. You soak it in milk for a day before cooking. The dry stuff, you have to soak in water for a week! It is not so tasty, but if you smoke dry it, it becomes a food fit for a king!
The French used to dry codfish on "flakes" (wooden racks) set into the sand on the west shore of Newfoundland. The strong on shore wind would dry the cod quickly and keep flies away. The part of the shore between high and low tide is called the "fore shore", and it is still known as the "French Shore", years after the treaty of Utrect established it in 1713. That thin and variable strip of land all the way up the west coast of Newfoundland was sovereign French territory for the purpose of "flaking fish" up until 1904. A most unusual concession you have to admit!

Even when you dry the fishl, you still had to pack it into barrels with layers of salt to keep it dry. But that salt didn't make the fish particularly salty, and this "dry salt" method is not available today....though I DID have some when I visited the French shore some years ago.
Wet salting involves catching and gutting the fish, and tossing it into barrels...a layer of salt, a layer of fish, another layer of salt, and so forth. When you got back to shore, you would dump it all out, and repack it (sometimes you would repeat this a couple of times), ready for the long ocean trip back to Europe. This is "salt cod", the same as you can buy in Canada in specialty stores even today.

Anerje, I had pretty much the same reaction in face of the original.

Stag, thank you for sharing that interesting bit of information. Salted - and then dried - cod is still popular in some of the southern European countries, like the Portuguese bacalhao which in turn made its way to Norwas; there's a restaurant specialising in bacalhao receipes in Alesund.

Dried cod is better taste quality than salted cod. The history of salted cod is a story of necessity because in North America the climate is to wet and too cold for drying the cod. They had to salt it first and take it out for drying either on newfoundland shores or even back in europe. That's why salt dried cod is called clip fish. Dried unsalted cod you can only prepare in parts of Northern Norway today because the temperature in that part of Norway is usually between = degrees celsius up to 8 degrees maximum for the 60 days that is needed to dry the cod properly. This is a tradtion more than 1000 years old, while salting and drying the cod has to do with the north american fisheries. Dried cod is not much eaten in Norway because the best cod ment money, and no one eat their own money. The Norwegians ate the leftovers that could not be sold and we had to use lime to reduce the smell and bad taste which explains our peculiar tradition of lutefisk. Stockfish is still today quality controlled in more than 20 different categories according to size and fatness. The thin one ragno goes to Veneto region in Italy the thick one to the south of Italy to fit with the different regional cuisines.
Dried cod was brought to Italy by the normans in year 1050 and it is part of their famous foods like bacala alla vincentina, which is recognised as one of their five national foods. Stockfish is eaten for the most important feasts in most Medditerian countries. It is a fantastic culinary histroy of the stockfish which is still alive today and the drying process is 100% handcraft. The salt fish is highly industriaised with induced salt and not properly dried to add extra weight and money for the producer.