25 Feb 2008
Two Heinrichs, a Cathedral, and Richard Lionheart
Part of the Speyer Cathedral we can see today goes back to the Emperor Konrad II who began the building in 1030 in replacement of an older church. Konrad was very impressed by the grand cathedrals in Italy he saw when traveling to Rome for his coronation as Emperor, and he wanted to erect the largest sacral building of western Christendom.

But it was his grandson Heinrich IV who gave the cathedral its final splendour. After the humiliation at Canossa and the ongoing strife with the pope, he used Speyer Cathedral as political demonstration. Heinrich rebuilt the eastern part with choir and apsis as well as the transept with its decorated gables, gave the main nave a cross grain vaulted ceiling (it had a wooden cassette ceiling before), and added the four towers and the arcade decorations on the outside.

There is another post about the history of Speyer Cathedral here. As it stands today, the building is close again to its original form it got during Heinrich's IV reign. 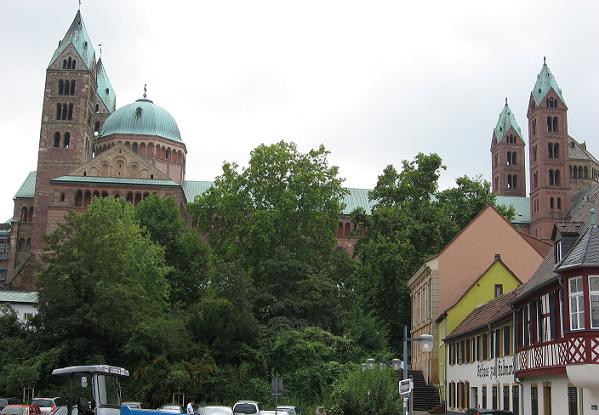 Speyer Cathedral seen from the south
To the left choir with towers and apsis, and crossing tower dome,
to the right narthex tower and Westwerk with towers

Would Richard Lionheart visit Speyer today, he might well recognise the cathedral. Part of the eastern walls as well as those in choir and apsis are the very stones he had looked at during his two visits in Speyer.

How did he get there? Well, most of you will know the story of Richard's capture by Duke Leopold of Austria in 1192, when Richard fled across the Alpes in disguise in hope to get to the lands of his brother-in-law Heinrich the Lion of Saxony who had returned from exile in England. Southern transept, decorated gable with arcades
Leopold handed Richard over to the Emperor Heinrich VI, son of Friedrich Barbarossa (though I bet he got a nice share in the ransom). And that is where politics come in. By the marriage of his sister Mathilde to the Heinrich the Lion, Richard was related to the Welfen family, while Heinrich VI was a Staufen. Those two houses didn't get along since Barbarossa exiled Heinrich the Lion, and the fact that Heinrich revolted against the son of his old enemy as soon as he came home, didn't improve matters.

Also, Heinrich VI needed money to reconquer Sicily, and Richard was a fat fish in that aspect. Since Philippe Auguste of France, another of Richard's enemies (he had a talent to make those) offered to pay the ransom if he got his hands on Richard, the latter decided to better go along with Heinrich VI's demand and pay. It fell upon his mother Eleanor of Aquitaine to gather the money. 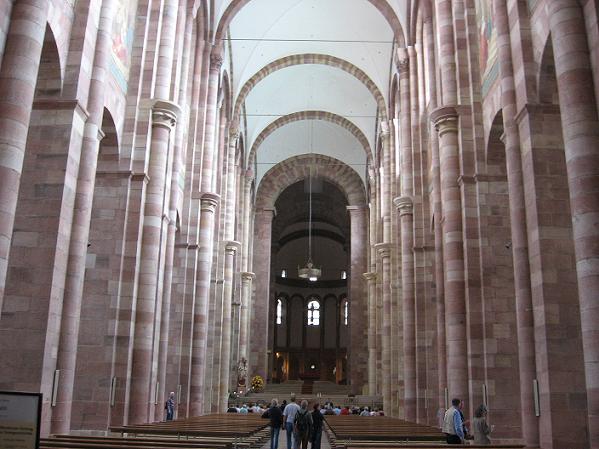 Main nave, facing east towards choir and apsis
Since the Church considered it a crime to capture a crusader, Heinrich staged a process during a Reichstag in Speyer where he tried to prove Richard's guilt in various points. Richard managed to not lose his temper for a change but to defend himself in a noble way, and thus the process came to nothing - except that Richard was kept prisoner in Trifels Castle until the better part of the money was paid. Heinrich escaped excommunication, but Leopold suffered that fate for the capture of Richard.

The final required payment took place in January 1194, and Richard was officially released. He had to swear an oath of fealty to the Emperor Heinrich, but that was nothing more than a gesture and never influenced the power constellations in Europe. Richard celebrated the Christmas before that event in Speyer, then already more a guest than a hostage, and we can be sure he has been inside the cathedral during masses. Probably already during his first stay since no one would have refused him religious assistance. 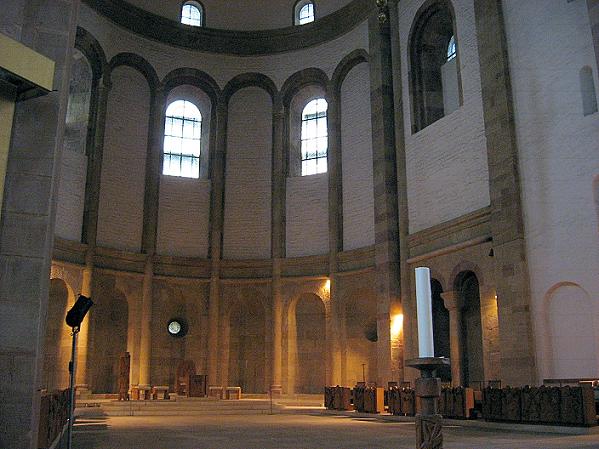 Choir with apsis
Heinrich VI and Duke Heinrich the Lion made peace as well, though I couldn't figure out if Richard had a hand in that. Back home, Richard had to deal with his brother John, while Heinrich VI managed to conquer Sicily. And the rest is legend. *grin*  ¶ February 25, 2008

It's amazing how little some of the buildings have changed. I love that pink colored stone.
All the intricate plotting between them to gather land and riches must have been fascinating to watch - not so good if you were caught up in the middle and in danger of losing your life.

A historical grab bag. Cool! :) Love your summary. helps me understand an era I know little about.

It is magnificient, Bernita. I've seem my share of old cathedrals, and Speyer is without doubt among the most splendid.

Shelley, Richard Lionheart should feature in more novels than he does (and not only Templar-Holy Grail themed ones); he's a fascinating character. As is Heinrich the Lion.

Hi Constance. Grab bag, lol. I try to get English connections in wherever I find them, because most of my readers are better acquainted with English history than with German.

I absolutely love how you link the history with the photos -
Thank you for a fascinating post!!!

The variability in the colour of the stone is lovely.
Interesting to have two contemporary "Lions" ! Was it an especially common nickname?

Carla, the two are the only ones I know about. In case of Heinrich, the name was given because the lion was the house sign of the Welfen (Welf meaning lion cub) though it did fit his character to some extent; he was more than a bit stubborn. In think in case of Richard it the sobriquet was entirely based on his formidable temper.

What a beautiful cathedral! I love the colours of the stones and the soaring interior columns. Your photos are maginificent quality.

The Imperial Cathedral in Speyer is one of the most beautiful I've seen. Photos can't really do it justice.

Beautiful photos. I enjoyed your post. What type(s) of stone was used in the original construction? Also, you'll have to help me a bit with the terminology. What are the apsis? I've seen this term a lot but never really had a clear picture of what it is.

Steven, I think it's sandstone which can be found along the Rhine. An apsis or apse is a semi-circular appendix on the east end of many Mediaeval churches, behind the altar room and the quire. You can see the interior in the last pic of the post, and a nice outside view on the last pic here.