27 Sept 2014
Cool Castles, Pretty Towns, and More Churches
Here are some more interesting places we visited during our little autumn tour around Halberstadt in the Harz; a new addition to my ever growing collection of photos for future posts (more can be found here).. 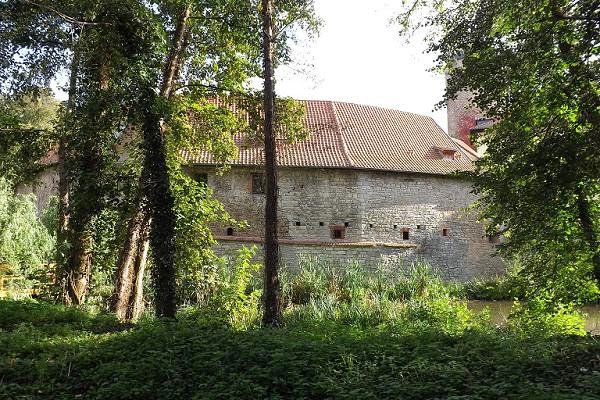 The Westernburg is the oldest moated castle in Germany that is still intact. It is first mentioned as fief of the Counts of Regenstein in 1180. When the family died out, the castle changed possession several times until it came into the hands of the administration in Halberstadt. Today it houses a spa hotel, but is still accessible for visitors, and they serve some good ice cream. *grin* 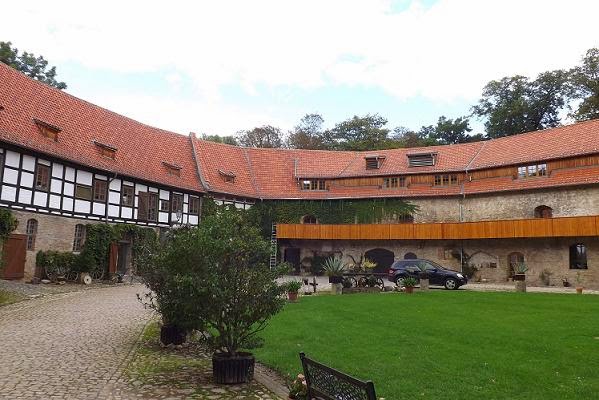 Westerburg, inside view
The ringwall with two water filled trenches encloses an areal of 350x300 metres; the castle itself is 60x80 metres, with the houses built directly to the two metres thick curtain wall, and a round keep in the western part. Later, a square shaped set of buildings was added to the west; used as living quarters since the Renaissance. 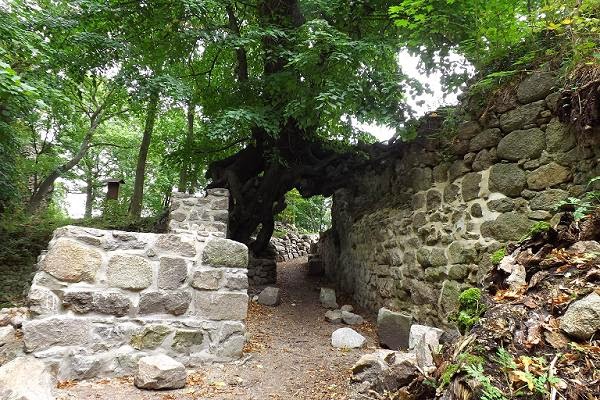 Castle Lauenburg, the inner gate (with an Ent at work *wink*)
Much less is left of the Lauenburg, another of our typical hilltop castles. Castle Lauenburg was built by Heinrich IV in 1164 as part of a chain of Harz castles which also included the Harzburg. One of its functions was the protection of the town of Quedlinburg (where I've been a few years ago). Friedrich Barbarossa conquered the castle during his war against Heinrich the Lion (1180); it was destroyed already in the 14th century. 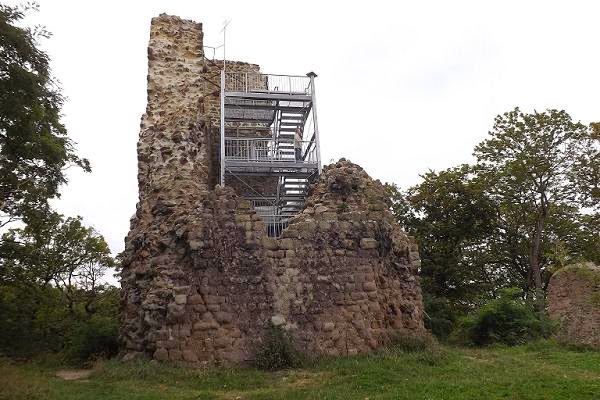 Lauenburg, keep of the outer bailey
The entire complex was once 350 metres long (that's coming close to some Norman whoppers like Chepstow), covering the Ramberg hilltop. The castle is divided in an outer bailey (Vorbug) sitting on its own peak with a still somewhat intact keep, and the main castle on the promontory, both separated by a natural trench and additional walls. The 140 metres long main castle was again separated into three baileys with two keeps. 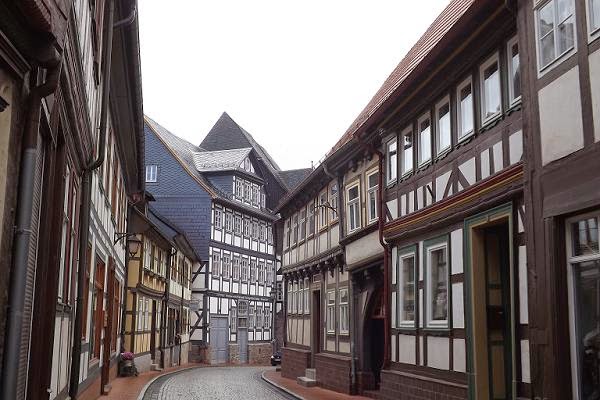 Stolberg / Harz
Stolberg is a small town in the Harz where my father spent some holidays as child. It's always nice coming back to it after the debris left behind by years of GDR mismanagement has been turned into beautiful houses again. The town started as settlement connected to mining in the Harz mountains in AD 1000, and was in possession of the Counts of Stolberg since the 12th century. The Stolberg family held the castle (nowadays a Renaissance building on a hill above the town) until 1945. 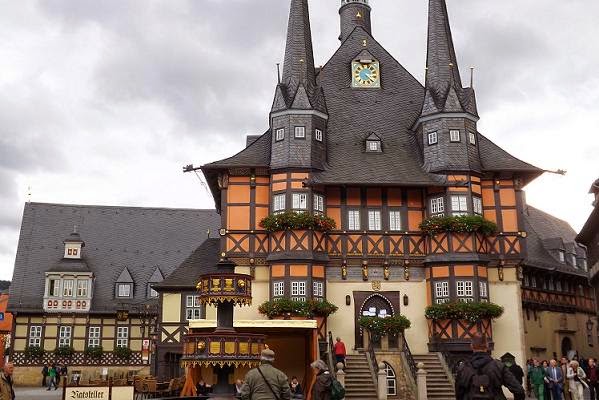 Wernigerode / Harz, the town hall
Wernigerode is one of those towns full of pretty half timbered houses, and the town hall is particularly beautiful. The origins of the town cannot be traced before it appears in documents in 1121, when the then-to-be-called Counts of Wernigerode took their seat there. The place got town rights in 1229. After the Wernigerode line died out in 1429, the town came into possession of the Counts of Stolberg until 1714 when it became part of Preussen. 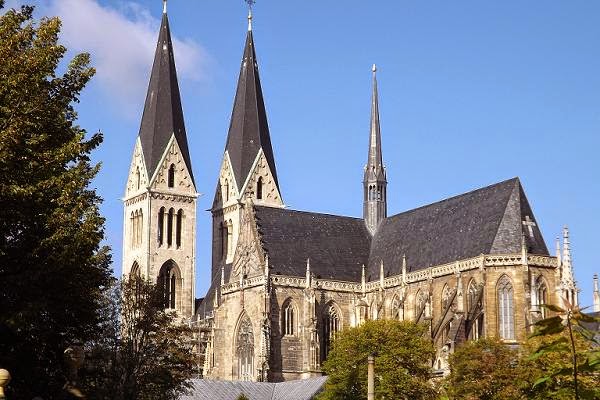 The cathedral in Halberstadt
The cathedral in Halberstadt is a predominately Gothic building that replaced an older church which was destroyed during Heinrich the Lion's wars with Friedrich Barbarossa. The main nave dates to 1260 and is influenced by the French style, but shortage of money led to delays, so the cathedral was finished only in the 14th century with the old Romanesque quire still in use until 1350 when it was replaced with a Gothic one. The transepts were added in 1491. Some things never change. ;-) 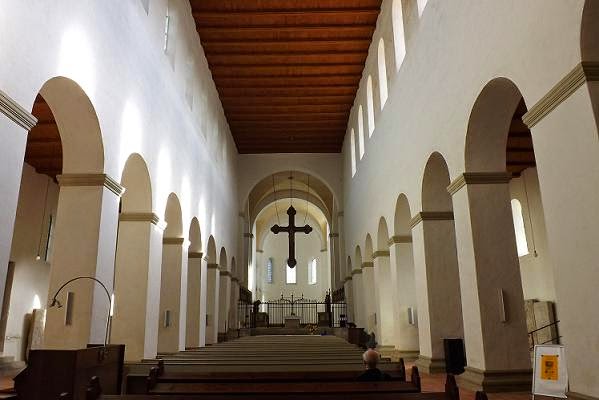 Halberstadt, Church of Our Lady, main nave
The Church of Our Lady in Halberstadt is a fine example of a four towered Romanesque church, dating back to 1005 albeit with changes in the 12th century (addition of the side naves), and again in the 14th century (cross grain vaulted ceiling to replace the former timber one). Even younger alterations during the 19th century historicism (wannabe Middle Ages style) have partly been deconstructed in the renovations post-WW2. 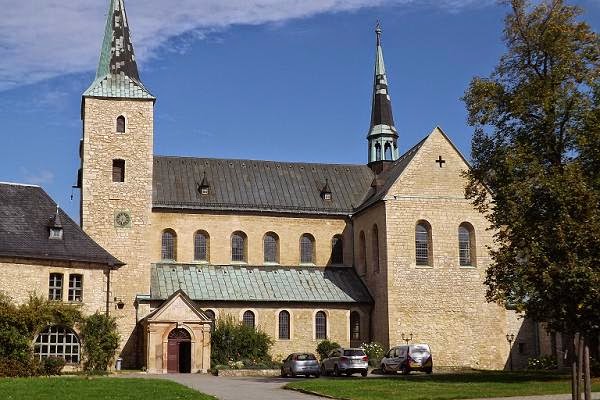 Benedictine monastery Huysburg
Huysburg Monastery was founded in 1080 as Benedictine monastery by Bishop Burchard of Halberstadt. It fell to the secularization in 1804, but became a monastery again in 1972; the only Benedictine monastery in the GDR. The church is a Romanesque basilica (unfortunately with Baroque bling inside). Other buildings have been added over the centuries; some of them serve as guest houses and meeting rooms today.  ¶ September 27, 2014

Comments:
Lovely photos, Gabriele! I would love to go to Germany one day, especially to Bavaria and Saxony, the one time duchies of Heinrich der Lowe. The churches, the castle, the towns are beautiful and what a rich history...

Looks like my engineers already got to the castle...

Kasia, that would include most of present day Lower Saxony which was the actual homeland of the Welfen after they lost Bavaria.

Constance, yep they did, and so did the peasants in search of stones for their hovels. They were not so fond of castles that belonged to the emperor instead of the local count (where they would find shelter in case of war; imperial castles seldom offered that).

Harz is beautiful. I have visited Wernigerode and Halberstadt in a deep winter. There were a lot of snow, it wasn't possible to visit the castles, only the cities.

The Harz is lovely in winter. If only there were not so many idiot drivers around who forget everything they learned when they see a snow flake. ;-)