24 Jul 2007
Where Richard III is Hanging Out
The little Richard III Museum in York is located in the Monk Bar Gate, one of the gate houses of the town fortifications. Since I was looking at the fortifications anyway, and some of my blog friends are Richard III 'fans', I decided to have a look and maybe take some pics. I didn't regret it. 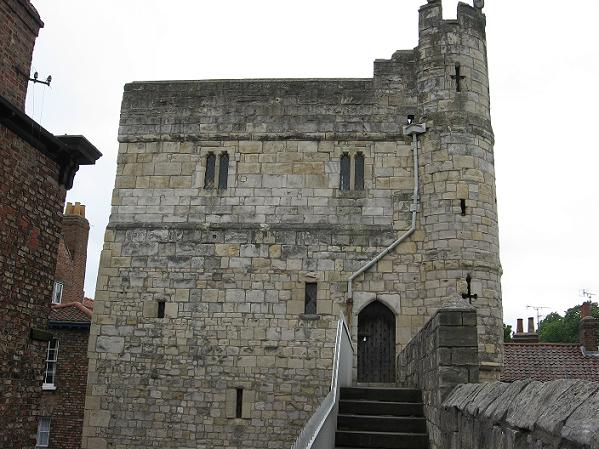 It's a bit of a fan museum, with lovingly drawn geneaologies, information tablets and some decorations like banners and replica of period armour. They also sell books and such. Central part is the audio tape trial the plays via loudspeakers in the main room, and a volume where you can add your own verdict. Someone wrote 'George Bush'. :) 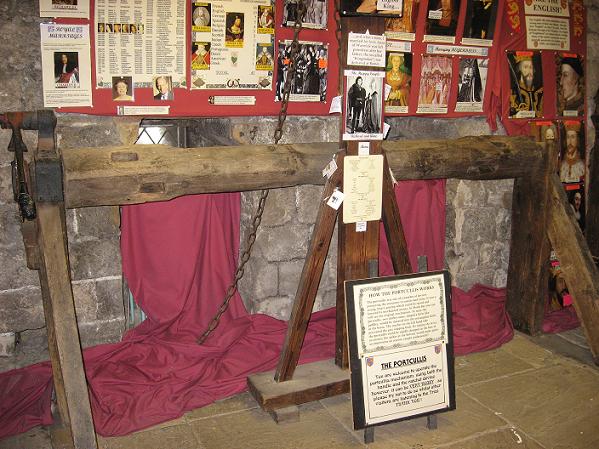 Portcullis in Monk Bar Gate, framed by Richard's family.
The location is part of the charme of the museum. Monk Bar Gate has the oldest working portcullis; it was last lowered in the 16th century but it's still in working order. The interior is very Mediaeval - stone vaults and not much space.

This is another shot of dear Richard III. 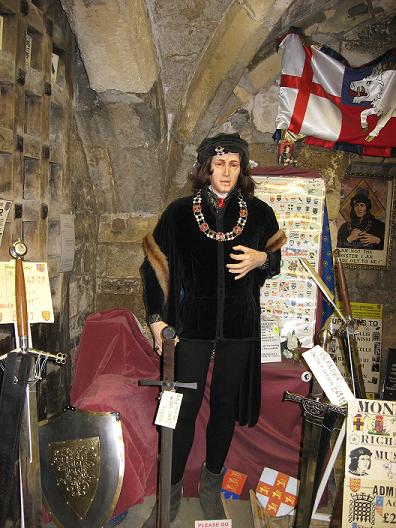 He looks pretty sinister in black, though he needs a moustache to twirl to make a proper Evil Overlord ™. *grin*

Here is another pic of the interior of Monk Bar Gate house. 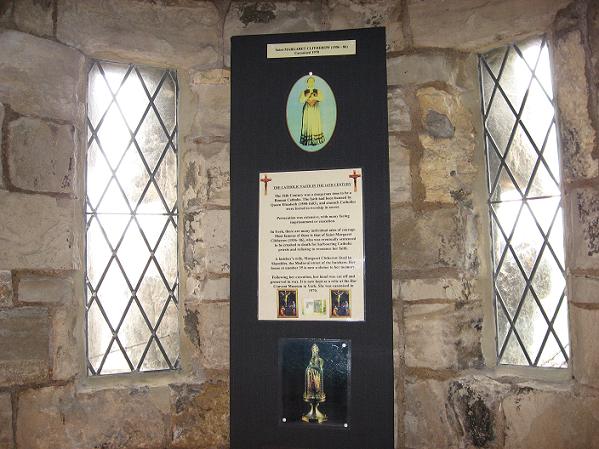 Monk Bar Gate, main room
It looks rather comfortable for a 14th century building, though I have no idea if they ever managed to get rooms with such thick stone walls warm. The secrets of Roman hypocaust and wall heatings had been lost then, and fireplaces don't make up for that. Though there might have been carpets and tapestries. 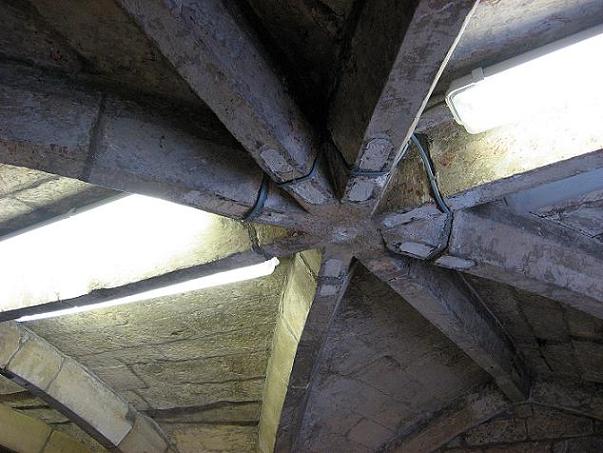 Closeup of one of the ceiling vaults
No torches and hanging lamps with candles these days, but unromantic neon lights.

Below are two more pictures of the interior of Monk Bar's Gate. 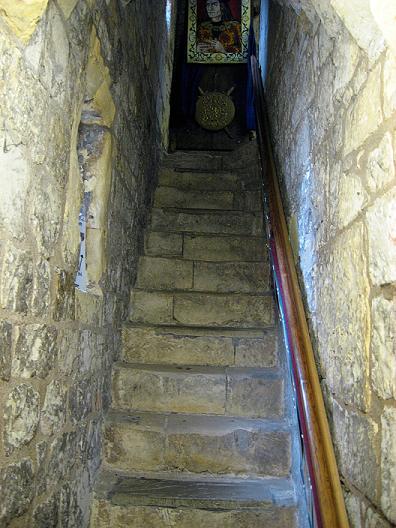 You enter from the street level, pay your fee, and then you have to go up a narrow and steep 14th century staircase.

People must have been smaller back then, and they obviously didn't carry big backpacks. I did not have one this time, but I remember shoving one of the suckers through some stair-cases in Scottish castles, lol. Well, maybe the guards sometimes had to drag a reluctant prisoner up there. Binding him tightly and hauling him up the stairs by a rope might have worked best. Yes, I'm evil - I'm a writer, what did you think? :) 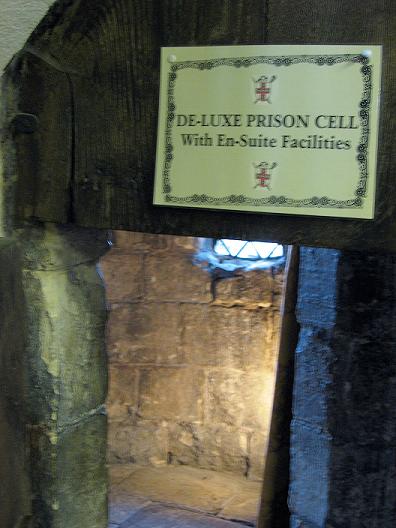 Monk Bar Gate was also used as prison. I got a giggle out of that one. The ensuite facilities were a night pot and a water jar. The cell is tiny, someone from our time who's 180 cm or so tall would have difficulties to lie down comfortably.

But I suppose comfortable wasn't a requirement. At least, the cells had daylight and probably less rats than your average cellar dungeon.

Comments:
You post such gorgeous pics! One of the reasons I'm giving you a rockin' blogger award. :D See my blog.

Aw, thank you. I keep collecting them these days. :)

Fantastic. I'm jealous that you have access to all this wonderful history :)

Oh I'd love to visit there. Richard III was the very first Shakespeare play I ever saw (age 12) and it's my favorite.

Thanks, Gabriele - I walked the ramparts last time I was in York but didn't see that there was a museum in Monkgate Bar. I must go and look if I get a chance to go to York again.

I SO have to go there!

And yes, I demand you read Sunne right away. Right away!

Ohh, are those archer ports in the tower?
Thank you so much for the photos, Gabriele!

Ohhh, I love York so much! I used to visit several times a year, but I haven't been for a long time, unfortunately.

Another place to put on my itinerary after I win the lottery!

Thank you, everyone. York is definitely worth putting on travel itineraries. And we all need to win the lottery, lol.

Bernita,
there are. After all, the gate tower was part of the defenses.